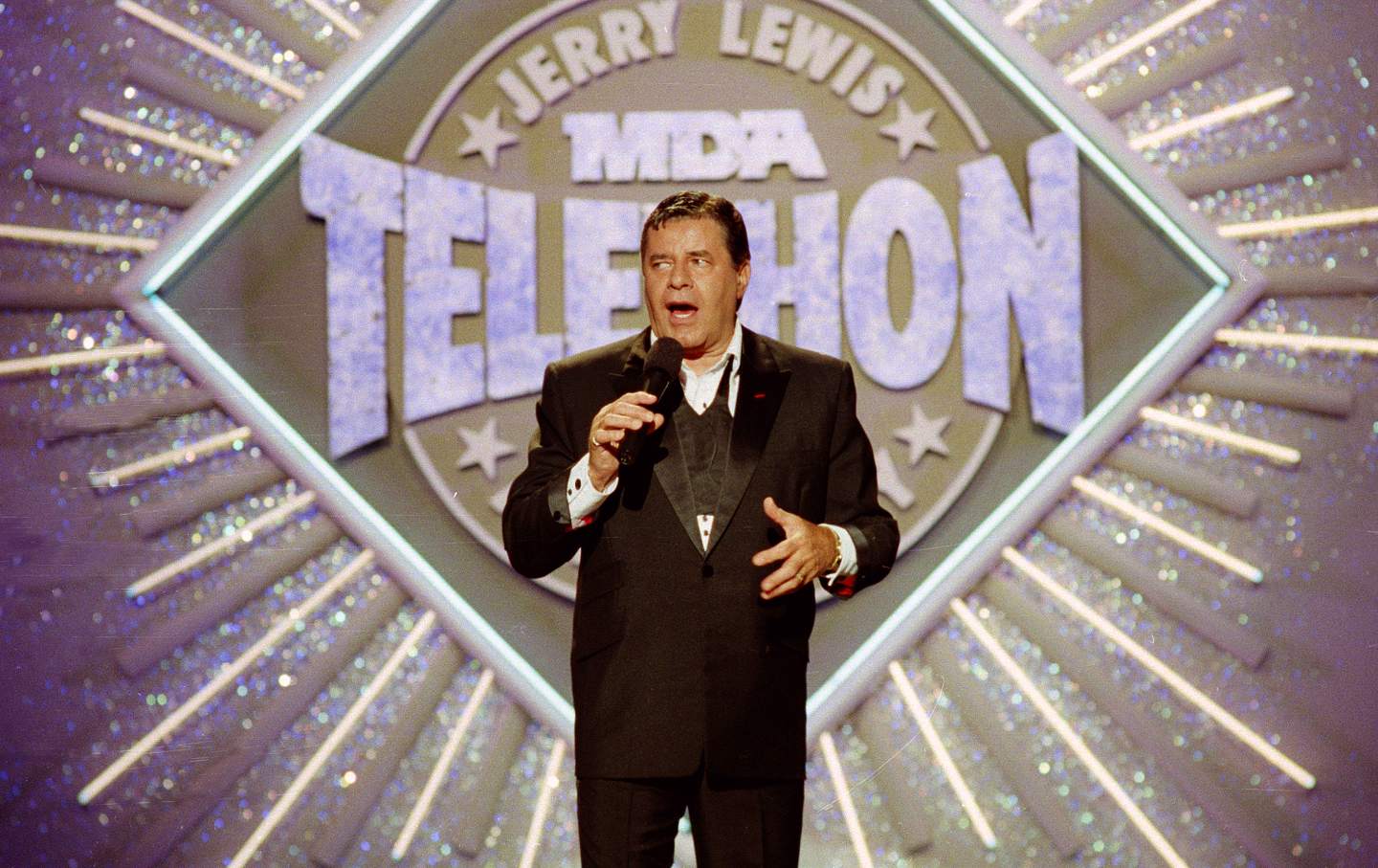 The Muscular Dystrophy Association is bringing back its signature event: the Jerry Lewis MDA Telethon. Running from 1954 to 2014, the show, which could last as long as 23.5 hours, defined the genre. Crying mothers and disabled children were trotted out along with a variety of entertainers and celebrities to convince an audience of millions to donate. And they raised a lot of money to search for a cure—an estimated $2 billion, according to Time magazine. In 1989, NPR’s Scott Simon described it as “the largest single-day, private fundraising effort in the world.”

Now hosted by the comedian Kevin Hart, the October 24 telethon will be a star-studded affair with appearances from Michael B. Jordan, Jack Black, DJ Khaled, and others. The show hopes to reignite MDA’s fundraising efforts, which have lagged during the pandemic.

That same day, activists with muscular dystrophy, many of them former MDA poster children, will protest the telethon with their own counterprogramming, including a Twitch stream to raise money for Neuromuscular Disabilities United, a disabled-led nonprofit. One protest group released an MDA telethon bingo card, highlighting the ableist cliches of disability charity events. At first glance, this may seem baffling: Why would anyone protest a disability charity and its fundraising efforts?

The answer is complex and has been heatedly discussed for decades. The activists I interviewed talked about everything from the role of nonprofits in providing services to the use of children to comments made by the late Jerry Lewis himself. But one thing was repeated again and again: These activists do not want to be pitied. And pity, historically, has been one of the biggest fundraising tools in any disability charity’s arsenal.

The Jerry Lewis MDA Telethon was a celebrity extravaganza, at its height featuring acts like Frank Sinatra, the Jackson Five, and professional wrestler Hulk Hogan. Later, as the telethon declined, it leaned heavily on amateur acts. In 2003, Washington Post television critic Tom Shale described the telethon as a “triumphantly campy pageant—comics, magicians, cheerleaders, tap dancers, impressionists, Vegas-style singers in shiny tuxedoes, even ‘the Dancing Dads of Peoria, Ariz.’ One could feel truly teleported in time, as if show business had been stopped and frozen in 1962.” These acts were interspersed with commentary from Lewis, as well as Muscular Dystrophy Association poster children, known as Jerry’s Kids.

The show deliberately presented children with muscular dystrophy to elicit pity from viewers. Lewis said himself in a 2001 interview with CBS Sunday Morning, “If it’s pity, we’ll get some money.” These children, audiences were assured, would die soon, unless viewers called and donated.

The Jerry Lewis MDA Telethon, and telethons in general, have long had critics in the disabled community. Evan Kemp was foremost among them. Kemp had a form of muscular dystrophy and served as the commissioner of the Equal Opportunity Employment Commission for six years. He also played a major role, behind the scenes, in authoring the Americans With Disabilities Act, which established the right of disabled people to access stores, bathrooms, buses, and every other form of public accommodation.

But before that, Kemp was one of the first people to decry the telethon. In 1981, he wrote an op-ed in The New York Times, headlined: “No pity, please.” It is still routinely read in Disability Studies classes.

“I am acutely aware of how many people in our society consider the disabled to be childlike, helpless, hopeless, nonfunctioning members of society,” Kemp wrote. “Playing to pity may raise money, but it also raises the walls of fear between the public and us.” To Kemp, the telethon’s focus on children was also harmful to adults—and to the adults that the disabled children would become. “Handicapped children are not made aware that many disabled people can and do function in society as useful adults,” he noted. Kemp died in 1997, but opposition to the telethon continued.

Mike Ervin founded Jerry’s Orphans, a group opposed the telethon, in 1991. “It was a sarcastic take on this whole rebelling poster child thing. You’re one of ‘Jerry’s Kids’ as long as you’re cute and young. But once you grow up and you’re an adult, all of a sudden you’re abandoned, and you become one of Jerry’s orphans,” Ervin said in a short documentary titled The Kids Are All Right.

Ervin is a former MDA poster child. He and his late sister both had a disability called spinal muscular atrophy, which is one of several neuromuscular disabilities that MDA is seeking to cure. “When I was a kid, they just called everything muscular dystrophy,” Ervin explained. More granular genetic tests didn’t exist yet. When Ervin was first diagnosed, he wasn’t expected to live very long. But today, he is 64 years old and writes a regular column for The Progressive titled “Smart Ass Cripple.”

“Something always rubbed me the wrong way about [the telethon]. I couldn’t figure out what it was for a while. I was almost afraid to say that I didn’t like it, because it was sort of like being a Communist. How could you not like something so wholesome and all-American?” Ervin told me. Eventually, he was able to name his discomfort: “I came to realize I was seeing myself misrepresented on TV.”

Ervin also recognized that charity serves disabled people poorly. “Everybody says, ‘Oh, I don’t want charity.’ Well, the reason people say that is because the position of the charity recipient is a very unenviable one. You have no power in the relationship. You have no agency. You sit there, and somebody else decides what you want,” Ervin said.

Dr. Christopher Rosa, a former MDA board member with limb girdle muscular dystrophy, doesn’t entirely agree with Ervin on charity. “The social needs, the independence needs, the access needs should be a human right. But given the arc of our history in the United States, there was an unmet need. That vacuum was filled by MDA,” he said. He has a generally positive opinion of the telethon, calling it “a form of social media before digital social media…a virtual community, a network of support.” He fondly remembers meeting Bob Sampson, a former vice president for United Airlines, through the telethon. Sampson was the first adult with a neuromuscular disability that he had ever met.

But Ervin and other disabled activists also took issue with Jerry Lewis personally. Lewis had no personal connection to the muscular dystrophy community. He did not have a disabled child or other family member. He did not have a disability himself, and once wrote in Parade magazine that if he did, he’d be a “half person.” Over the years, Lewis had made dozens of disparaging remarks about disabled people. For example, in the same 2001 interview with CBS Sunday Morning, Lewis said, “If you don’t want to be pitied because you’re a cripple in a wheelchair, stay in your home.”

Rosa, when asked, did not recall Lewis saying anything disparaging about disability. “I think Jerry Lewis cared very deeply about families impacted by neuromuscular disease,” he told me. But there are dozens of videos, articles, and first-person accounts that reflect a different reality.

Hart doesn’t have the same baggage as Lewis, at least when it comes to disability. Hart has not, to anyone’s knowledge, called a person in a wheelchair a “living waterbed,” as Lewis allegedly did during a 2005 telethon protest. But Hart similarly lacks a connection to the disability community, as do almost all the other celebrities listed to appear in the new 2020 telethon. It’s true that there aren’t many celebrities with neuromuscular disabilities, but the few that exist are absent.

Only one celebrity announced so far has a neuromuscular disability: the actress and fashion model Jillian Mercado. Mercado did not watch the telethon growing up, and was never an MDA poster child. Strangely, Mercado was surprised to learn she was listed on promotional material for the new telethon. When I interviewed her, she was adamant that while she had met with MDA, she had not agreed to appear. “I never signed anything,” Mercado told me over the phone. “It was not a ‘yes’; it was a ‘maybe.’ The only way I would say yes to it is if my opinions and concerns were heard and changes were made.”

Among other issues raised, Mercado made clear that she did not want to be the only visibly disabled person attached to the project. “If you’re going to tokenize me, at least make me cohost,” she said half-jokingly. Mercado expressed concern, but was optimistic about the tone of the telethon overall. “Fundraisers, when they’re associated with disability, can be this whole fucking mess of pity.… They told me that they’re doing a lot of videos of just kids being kids. Like if a kid really likes baseball, they’ll show that, not the hospital or something. Or they’ll profile someone like myself who’s in movies.”

Dominick Evans, one of the leaders of the newest iteration of Jerry’s Orphans, is not as hopeful. As a former Ohio poster child, he has little trust in the organization. He remembers being treated well by his local MDA chapter, but as he got older, everything changed: “When we were no longer cute, we were no longer profitable.”

Drawn to entertainment from a young age, Evans basked in the attention he garnered as one of Jerry’s Kids. “I couldn’t even walk down the street at the height of being a poster child without people knowing who I was. I would have people come up to me on the street and be like, ‘Hey! I saw you on TV,” he recalled. “I got to sing. I sang on the telethon regularly. I thought I was doing something good. I thought I was helping people. And yet every day, I was suicidal. Every day I wanted to die. And it was because of the message the telethon was spreading.”

For Evans, one of the most damaging aspects of the telethon was the focus on finding a cure. “I spent so many years wanting to be cured and wanting to be saved. And all of that could have been [avoided] if I had understood that I didn’t need any of that.”

Evans isn’t against finding a cure for neuromuscular disabilities: “Some of us have disabilities that can kill us. We need to talk about treatment options.” He is, however, against what he calls “cure mentality.” He explained that “cure mentality is the idea that without a cure, we’re broken or something’s missing, and that whole mentality breeds hatred.”

The concept of cure and the concept of pity are, to Evans, Ervin, and others in their movement, inextricably linked.

To its credit, the Muscular Dystrophy Association has an advisory committee for the new telethon made up of people with neuromuscular disabilities. “When we thought about reimagining the Telethon, our number-one goal was to ensure that the neuromuscular disease community is accurately portrayed, and funds raised to support the families we are here to serve,” Mary Fiance, MDA director of public relations, told me.

Ervin remains skeptical. “I don’t know if they feel they can create a new and improved, more accessible, hip, progressive telethon. I don’t think such a thing is possible,” he said. We will have to wait and see.