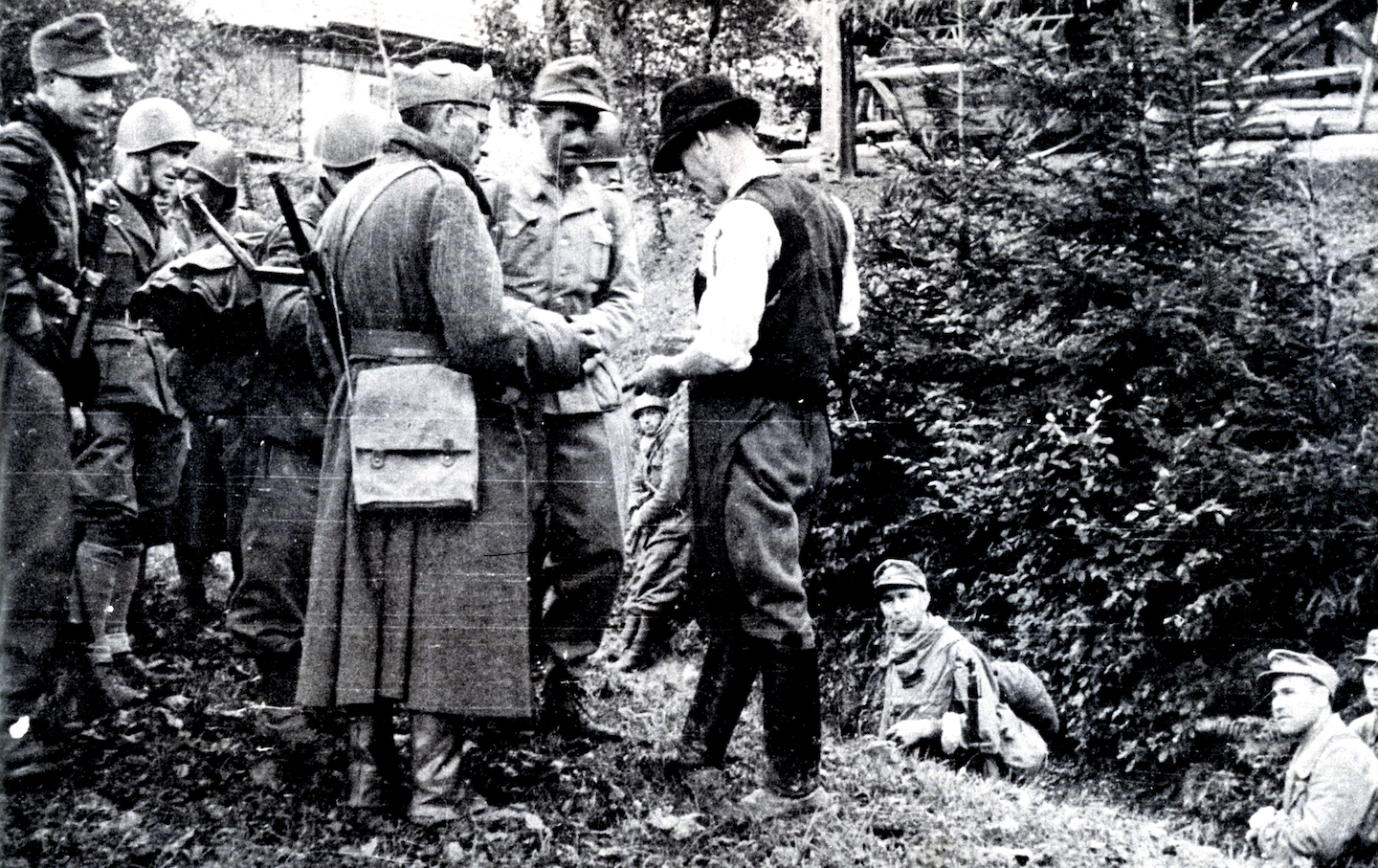 The Slovene novelist Lojze Kovačič is a member of that improbable cohort—Joseph Conrad, Samuel Beckett, Vladimir Nabokov, Aleksander Hemon, Yiyun Li—whose greatest works were written in an adopted language. Born in 1928, in Basel, to a Slovene father and a German mother, Kovačič grew up speaking Swiss German. At the age of 10, he and his family were expelled from Switzerland after his nationalist father refused Swiss citizenship. They were forced to settle in Slovenia, then part of the Kingdom of Yugoslavia, and Kovačič came of age in a state of profound estrangement. (He memorably described his first experience with the Slovenian language as chewing an unfamiliar and still-raw food.) An exile’s pessimism would come to define his literary disposition. His fictions froth with anger, wonder, loathing, and shame, the imaginative products of deracinated consciousness. Though largely unknown to English-speaking audiences, he is one of the 20th century’s great novelists of dislocation, nowhere at home, ever between cultures and languages, and always at odds with himself. His sprawling three-volume autobiographical novel, Newcomers, is a bildungsroman in which the young protagonist’s disorientation is paralleled by the larger displacements of war.

Book One, first published in Slovenia in 1983, and translated into English for the first time in 2016, reimagines the forced expulsion and resettlement the author experienced in his youth. The Kovačič family flees Basel by midnight train, decamps briefly at an uncle’s farm in rural Lower Carniola, and eventually settles in the Slovenian capital of Ljubljana, there beset by near constant hardship and provocation. The adolescent narrator and Kovačič-cipher, Bubi, makes and loses friends, develops a pidgin Slovenian, forms a gang, nearly fails out of school, and thinks a great deal about God and about sex. His mother is petulant and paranoid, his sister nostalgic for the bourgeois amenities of Basel. His father, a master furrier and an anti-Semite, welcomes the Axis forces’ conquest of Yugoslavia in 1941 as a means of restoring European order. Bubi comes to realize that his family’s improved standing during the occupation of Ljubljana is tied to Hitler’s ascension: As German speakers, they are symbolically aligned with the conqueror, whether envied or hated or feared. The first volume ends with the appearance of clownish Italian soldiers loitering about the streets and romancing the local women.

Book Two, recently released by Archipelago, examines Bubi’s attempts to forge an identity amid the many political, social, and aesthetic ideologies vying for precedence in his life. As the tide of war turns, his Germanness, formerly a privileged status, now marks him as a pariah. The alienating force of his language is illustrated in a striking formal choice by translator Michael Biggins: German dialogue remains untouched, with each line asterisked. The reader must scan to the bottom of the page to find the translation. (Slovenian dialogue is rendered in English directly within the text.) While this can become challenging to read in scenes with multiple German speakers, as when the Kovačič family is in conversation, it also enacts a kind of auto-estrangement that underscores the novel’s central preoccupation: the perpetual incoherence of exile.

The second volume opens with the Kovačič family living in near indigence as the occupation wears on: Mashed turnips amount to a feast; the stubs of cigarettes are dutifully collected in the streets; the dearest objects are sold for a pittance. Their destitution necessitates a hardscrabble opportunism. Bubi goes door to door selling stray bits of fur as his family battles angina, pulmonary edema, nervous ailments, and consumption. A found crate of melba toast becomes a prize beyond measure. “You had to guard against fantasy,” Bubi says, “which ought to be ashamed of itself, considering what people had to go through.”

Like another massive autobiographical novel cycle, Karl Ove Knausgaard’s My Struggle, shame is the profoundly warping force at the center of Newcomers. “Of all the humiliations of exile,” Bubi says, “the most mortifying is that eternal begging and apologizing…for this! for that!…one day all you’re left begging for is everyone’s pardon…you’re in everyone’s way, a burden to everybody…even once your misfortune has passed, you can’t change yourself.” Selfhood is the novel’s engine of degradation. It gathers within itself all differences, all blunders, all incongruities. The contortions required by Bubi’s attempted assimilation offer a pronounced slant on the coming of age story. Slow maturation is replaced by a pained, willful abrasion. Silence is preferable to the clumsiness of speech, and shadow more welcome than exposure. Newcomers boils with this strictly enforced interiority. Bubi’s is a mind throbbing with its own unexpressed accumulation.

The Letters Behind One of American Poetry’s Most Infamous Books

Does This Nearly 1,000-Page-Long Sentence Encapsulate the Anxiety of American Life?

Kovačič writes in staccato bursts, his short sentences skewering thought while it still lives. His constant use of ellipses may call to mind the Céline of Death on the Installment Plan or Guignol’s Band, although he is less interested in capturing the patterns of particular speech than in creating the compression and speed of consciousness. He conjures a cinematic flow of images, each possessing an appealing, almost picaresque dynamism. Life flowers continuously in unexpected places—black markets, hospitals, unheated apartments, children’s forts—as a sort of chaotic and implacable pressure. Thieving, fistfights, odd jobs, ecstasy (both religious and sexual), and philosophy are all swept up in Bubi’s story and assorted into scenes of agitated vitality.

Amid almost total ostracism, sex and art comprise Bubi’s primary forms of belonging. He meets a local girl, Tatjana, with whom he loses his virginity in the ruins of a house: “This was something so new and so terribly alive that I couldn’t compare it to anyone or anything else…not to a tank, not to food, not to the war, and not to movies.” His libidinal fevers create a makeshift, if largely imagined, form of connection. He dreams of unimaginable congress. He falls in love with neighbors and teachers and street waifs. He also discovers his latent gifts as a painter and author. At school, he barters rations for his hand-drawn comics. Bubi begins reading widely, too (Fyodor Dostoyevsky, Knut Hamsun, Andre Gide) and curses his own floundering attempts at creating fiction: “I wasn’t able to write it the way it happened,” he tells one of his teachers. “The part of it that’s behind the event, the part that’s unusual, strange, unreal.” Writing is “more impenetrable than rock,” he says, though he doggedly persists, tenacity having formed like a callus from the frictions of his alienation. His passions furnish their own kind of continuity. Unlike so much else in his life, his sexual and intellectual obsessions make him intelligible to himself. They confirm that he exists.

As a form, the novel’s integrative possibilities surely hold special appeal for the exile. For Bubi, as for Kovačič, fiction represents the hope and the hazard of self-fashioning. Newcomers, like all great literary art, manufactures coherence from a life that rarely supplies anything like it. It would be too great a leap to say that Kovačič grants his exile a dimension of the universal. But in the intricate mapping of his lonely depths, he has also fashioned something of a ladder.

Kovačič has often been compared to Proust for his ability to recapture the past, though there is something of Tolstoy in him as well—the dense feeling of reality his work evokes—and of the writer Danilo Kiš, whose “family cycle” so richly recalls the wartime Hungary of his childhood. These are admittedly august names, but Kovačič belongs in their company. Newcomers is a novel of grand and appalling power. It is a human-smelling work, slick with sweat, trembling with appetite. And deeply sad in its loneliness and privation, too. It wounds us in the way our own memories do. It is a marvelous and humane feat of clarity and consolidation.