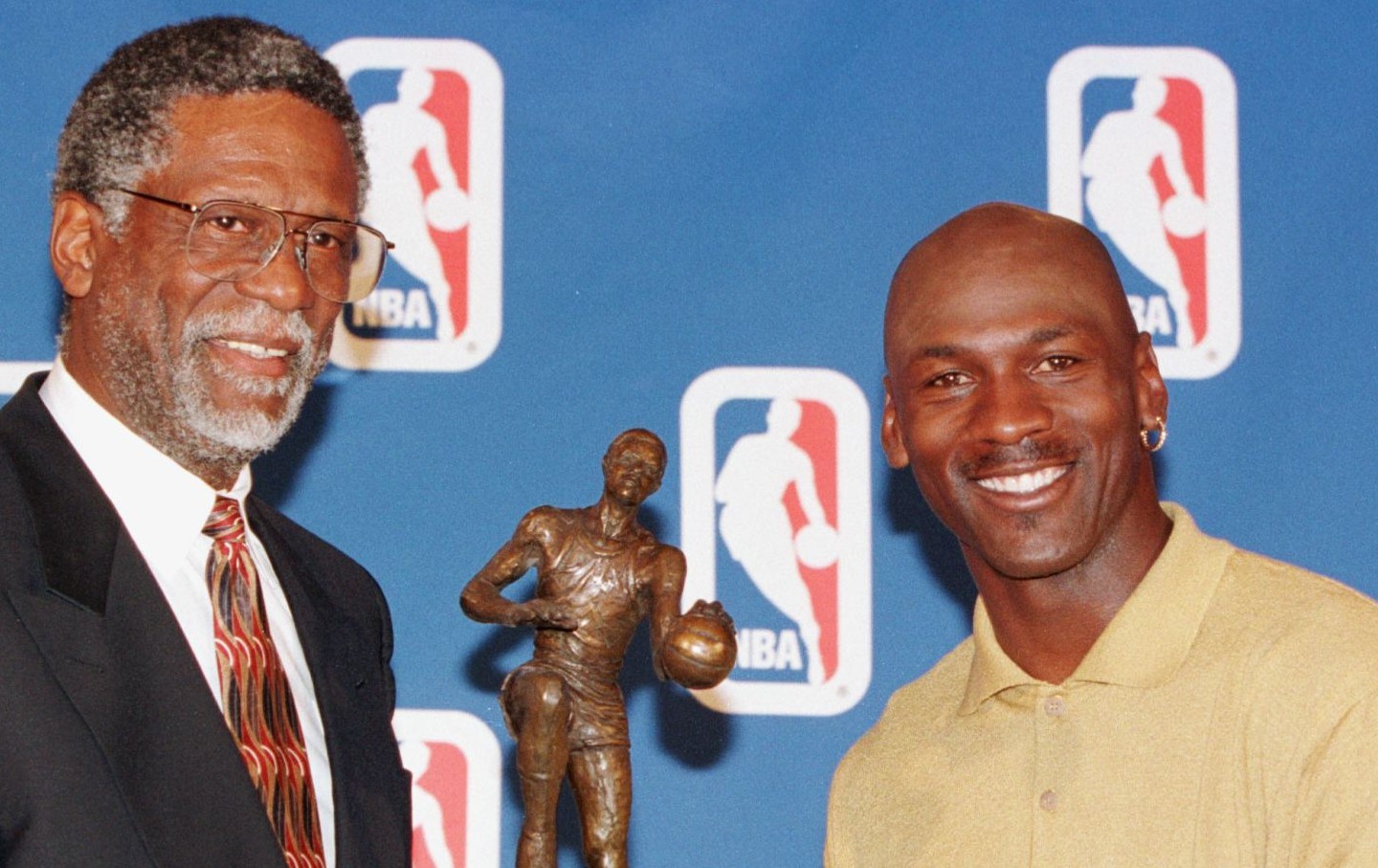 Bill Russell, left, and Michael Jordan at a press conference in May, 1998 in Northbrook, Illinois. (Jeff Haynes / Getty)

This is basically the core and heart of the magnum opus that is The Last Dance: the lionization of the idea that winning isn’t everything, it’s the only thing, and nice guys finish last. It’s as if Shoah were directed by Vince Lombardi. The Last Dance sends the message to everyone—particularly young ballplayers—that winning in sports and life demands that you be the bully. Everything is justified, if the ends involve confetti and rings. Even hauling off and punching someone smaller than you in the face, as Jordan did with teammate Steve Kerr, is remembered as something closer to a bonding experience—a macho rite of passage—than as an embarrassing loss of temper.

The Last Dance, like its protagonist, shrugs its shoulders and says, in effect, that this is the price of greatness. But is it? If this entire series weren’t just an exercise in Jordan brand extension for the 21st century, it might ask this question. It could examine other examples of greatness and ask if being “like Mike” is how you come out a winner. If it did, this thesis would collapse under scrutiny.

Just look at Bill Russell. The Celtics great is the most prolific winner in NBA history, with 11 championships in 13 years. Russell’s style of leadership did not involve demeaning and denigration. The great Frank Deford, in a brilliant 1999 profile of Russell, called him “the most divine teammate there ever was.” “‘He was just so nice to be with on the team,’ says Frank Ramsey, who played with Russell from 1956 to ’64, Russell’s first eight years in the NBA. ‘It was only when others came around that he set up that wall…’”

For Russell, the love was saved for his team. The wall came up as sponsors, fans, and opponents demanded their piece of him. Jordan was the opposite. Outside the team, he gave us that winning smile and sold us products, but his squad got the back of his hand. Jordan was pure capitalism: expanding his brand off the court, and a cutthroat bully with his own team. Russell was pure resistance: finding love and solidarity among teammates and fiercely holding onto his sense of self off of the court. His white teammates who didn’t show him solidarity, particularly on Russell’s proud struggles against racism, still loved him then and feel guilty today that they didn’t do more. One gets the feeling that the only regrets Jordan’s teammates have is that they didn’t stand up to him more and instead let him break their will. Russell had teammates who became his brothers for life. Jordan has generated only wary respect and resentful awe. The only people who “ride or die” for Jordan are personal assistants, trainers, and bodyguards: people paid to be in his presence. Comparing Russell to Jordan is like comparing Mr. Chips to Charles Foster Kane: Both got results, but that’s where the comparison ends

There are poignant, human moments in Episodes 7 and 8 of The Last Dance: one where Jordan stops filming his interview when he ponders just how intense he felt he had to be toward his teammates, and weighs the cost of that intensity, tears in his eyes. The other shows him in 1996 crying on the floor on Father’s Day, after vanquishing the Seattle Sonics in the NBA Finals. Both are reminders that we are not only dealing with a brand of relentless competitiveness. We are watching a human being who has been damaged, and then never hesitated to damage those around him.

If The Last Dance had courage, it would be a cautionary tale instead of a hagiography. It would not only explore the price of greatness, or whatever such branded nonsense. It would be a warning: You don’t need to act this way if you want to win. It’s actually antithetical to what’s best about sports. You can get away with being the bully when you’re the best player on the planet. But being able to bully someone is not the same as a justification to do so. It’s exercising power over someone just for the sake of doing so. That’s not admirable. That’s abusive. Rings don’t make it right.