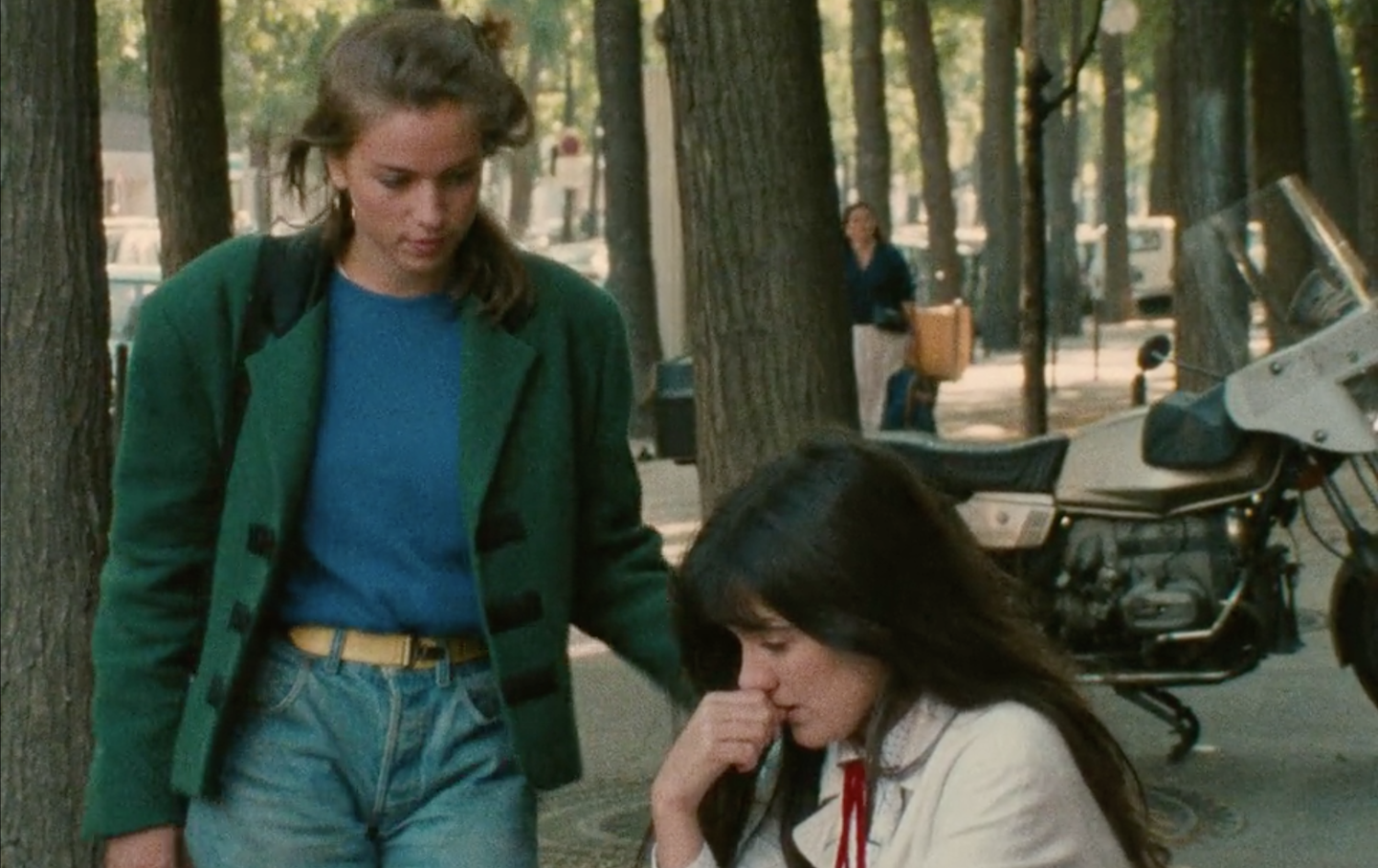 A scene from Four Adventures of Reinette and Mirabelle. (Courtesy of the Metrograph)

In Éric Rohmer movies, the men talk too much. Almost all that talk is about women. His men obsess over women, philosophically musing on the desire for new female companions to a maybe-ex-girlfriend even as they’re already yoked to a significant other (Claire’s Knee); they detail the Catholic morals that prevent them from acting on their desires, replacing sex with conversation (My Night at Maud’s); and they bemoan sexually liberated women who leave the men’s desires unfulfilled (La Collectionneuse). Few capture the pitiful foibles of man in such an entertaining, witty, visually splendid manner as Rohmer.

While I find almost all of the French New Wave auteur’s films (including the aforementioned titles) sublime, his underseen and underrated 1987 film Four Adventures of Reinette and Mirabelle—in which men are secondary, if not tertiary characters—stands out as a delightful deviation in his filmography. A new restoration of this film will receive a virtual premiere on Metrograph starting September 11, with a weeklong engagement as part of its Rohmer retrospective. (Earlier this year, Rohmer would have turned 100.)

The ’80s saw Rohmer exploring more female protagonists and perspectives. In Four Adventures, there are no male leads. This is also somewhat true of the film he is best known for during this period, The Green Ray (Le Rayon Vert), which he made the previous year, with Marie Rivière playing the lonely-hearted Delphine embarking on a sad and solo vacation around France that ends in Biarritz. The Green Ray and Four Adventures of Reinette and Mirabelle were shot on 16 millimeter and share a majority of technical crew members (some on their first jobs), who filmed very inconspicuously in public settings around Paris. For these reasons, Rohmer called them his “amateur” films, differentiating them: “One is a vacation film [The Green Ray], the other a weekend film [Four Adventures].”

While waiting to shoot the final scene of the titular green ray—a rare meteorological phenomenon of a verdant flash on the horizon at sunrise or sunset—Rohmer made Four Adventures, an episodic comedy about two young women: the country-mouse painter Reinette (Joëlle Miquel) and the savvy Parisian ethnology student Mirabelle (Jessica Forde). The two meet in the French countryside when the latter gets a flat tire on her bicycle. Reinette invites Mirabelle to stay with her; Mirabelle later tells her that a room in her Paris flat is opening up, and they become roommates in the city.

Though it sits between The Green Ray and Boyfriends and Girlfriends (1987) in Rohmer’s filmography, Four Adventures is not part of his Comedies and Proverbs series, a sextet of films based on famous proverbs and how imagined ideals drive people. It also does not belong in his Six Moral Tales, though the middle two chapters of this film (“The Waiter” and “The Beggar, the Kleptomaniac, the Hustler”) explicitly explore questions of morality. The films in his Moral Tales set concern men who are committed to one woman and are tempted by a second, only to return to their first. Here, the morals in question deal with the ethics of theft and charity. The rigid Reinette—who can be generous but also believes a little too steadfastly in law and order—finds her inflexible position shaken upon her move to the metropole, where she is swindled.

Rohmer made his name on Impressionistic aesthetics—his pictures stippled with vibrant colors and film grain—and sharp romantic dynamics between men and women. With Four Adventures, an unmistakable Rohmerness remains, but romance is peripheral at best, giving way to a lighthearted but realistic platonic relationship between two women. Four Adventures is considered neither part of the female friendship canon nor a major Rohmer, but it should be included in both.

This film features not a man who talks too much but a woman who does. Reinette and Miquel have this in common. Having been a fan of Rohmer’s 1984 film Full Moon in Paris, the actress asked to briefly meet the filmmaker and ended up staying for hours, telling him all sorts of stories, which informed the four adventures of the film. Funnily enough, the bookends of the film concern the pursuit of silence. In the first chapter, “The Blue Hour,” Reinette excitedly promises to show Mirabelle the coveted blue hour—a short period of twilight just before sunrise when “the day birds aren’t up yet and the night birds are already asleep”—and becomes nearly hysterical when a car driving by disrupts the peace. In consolation, Mirabelle agrees to extend her stay with Reinette to experience this serene moment the next morning, and her prolongation leads to friendship and cohabitation in the city. So begin these four adventures.

Reinette and Mirabelle are opposites—naive and cynical, respectively—and their conversations about ethics can get heated. Though they disagree, for example, on who deserves their charity and such concerns, their differences never reach a climactic break. They have a lived-in, loving dynamic: Reinette brings an excitable energy to Mirabelle’s life, and Mirabelle is generous with her patience and urban shrewdness. Between moments of bickering and comforting, Reinette and Mirabelle end up being one of the most functional pairs of Rohmer’s catalog. And the everyday details of their see-saw dynamic work up to a beautiful grand finale.

Its final chapter (“Selling the Picture”) finds Rohmer in peak comedic form. Reinette gets into a financial pinch when she cannot afford her overdue rent and calls a gallery that might be interested in buying one of her paintings. When no one picks up, she launches into a monologue about how she prefers to let her paintings talk instead of words—all, ironically, while tripping over her overstuffed monologue. When Mirabelle points out how loquacious her friend is—almost like an audience member commenting on the talkiness of Rohmer films—Reinette promises in a huff to take a vow of silence. What timing: The gallerist calls back, and Reinette must sell her painting while completely mute. This leads to a quietly slapstick ending to the quartet of adventures that involves heady ruminations on the previous three chapters as well as a delightful cameo from Rohmer regular Fabrice Luchini as the gallery owner. When he tries to lowball the now-taciturn Reinette, the street-smart Mirabelle steps in to save the day without the gesture coming off saccharine. Rohmer pulls off this low-key art “heist” with sharpness and gentleness and some meta humor, birthed from something Miquel said to him early in their first meeting: “I organize my life in accord with principles. When I have decided to do something, I do it. Once I’d decided not to talk, and I didn’t talk.”