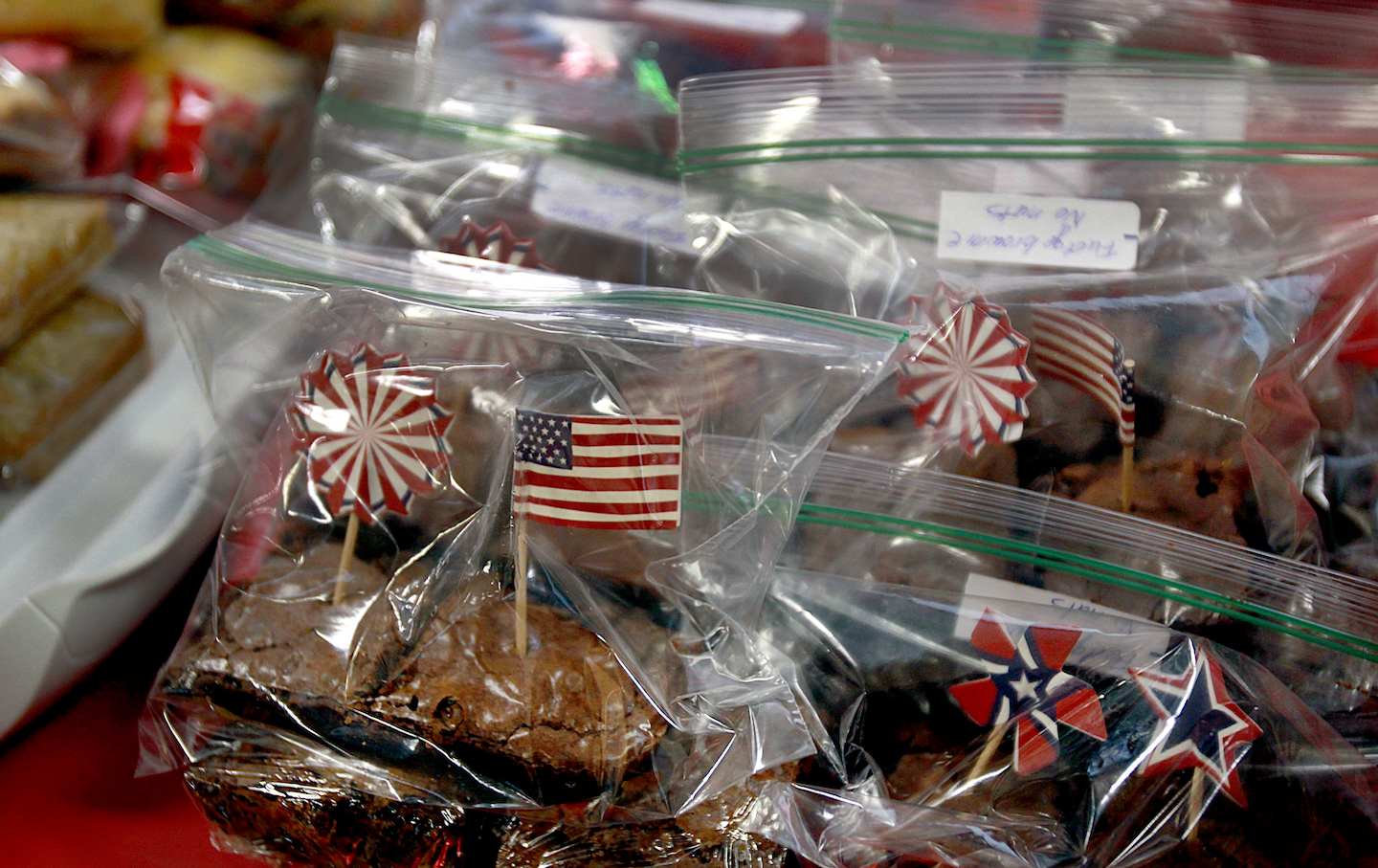 Bake goods for sale at the Broad Street Elementary School in Nashua, N.H., as the state voted in the presidential primary election, 2016. (Photo by Suzanne Kreiter/The Boston Globe via Getty Images)

A bake sale has no inherent politics. There have been bake sales against affirmative action and to raise money for Planned Parenthood. Cakes have collected funds to create a “51st state” for Christian conservatives and support getting an anti-nuclear activist out of jail, inadvertently starting the radical food-sharing collective Food Not Bombs. That’s the thing about a capitalist enterprise: It swings both ways.

Since the 2016 election, though, the concept of the bake sale has been given a radical sheen. With a low barrier to entry and an implicitly enticing premise, they’ve become a go-to way to use social capital to drive attention to various causes and organizations explicitly working for progressive change. Whether it’s pastry chef Natasha Pickowicz’s Planned Parenthood fundraisers or the more recent million-dollar success of Bakers Against Racism, there’s been a push to make these types of money-collecting activities widely accessible.

There was a time when baked goods and plates of food were sold in order to support boots on the ground. That’s why the work of Georgia Gilmore and the Club From Nowhere, who sold pies during the civil rights movement in order to raise money for those participating in the Montgomery bus boycott, is usually cited in order to present the potentially progressive nature of these events, which had in more recent years come to be associated with suburban soccer moms selling cupcakes to buy school uniforms.

But in a moment of political and civil unrest, when mutual aid and community fridges are ideas hitting the mainstream, what role does the bake sale play? The idea of “mutual aid,” a term introduced by the Russian anarchist Peter Kropotkin at the turn of the 20th century, is built on solidarity rather than charity; everyone in a community gives freely of what they can, with no person’s contribution considered more or less worthwhile than another’s. This goes against the idea of top-down charity, of which the bake sale is a small-scale model. There’s a crucial difference between giving a neighbor a loaf of bread because they’re hungry and selling a neighbor a loaf of bread in order to give the money to an organization. Although a recent Food & Wine headline recently declared, “The Bake Sale Returns to Its Political Roots,” the reality is not as clear-cut.

Bake sales as we recognize them today originated in the 1800s, when women used their facilities in the domestic sphere to perform charity, then understood as a moral obligation in some circles. When the early 1900s rolled around, suffragettes in Virginia seeking white women’s right to vote “especially favored bake sales as a fund-raising technique,” wrote Elna C. Green in Southern Strategies: Southern Women and the Woman Suffrage Question. “It allowed them to demonstrate that their advocacy of woman suffrage did not impair their competency in the kitchen.” Nowadays, when the role of pastry chef in restaurant kitchens is dominated by women, many have seen bake sales as a means of using that professional talent to raise funds for projects that help women contend with white male authority.

“Bake sales aren’t inherently a form of protest, but they are organizational frameworks that can be used to draw attention to a cause or fundraise for something specifically,” the founders of the Bake Sale Project, Pickowicz, Lindsey Peckham, and Tina Byrne, said in an e-mail. (Their original flyer referred to bake sales as a “grassroots form of protest.”)

“Bake sales traditionally feel domestic and ‘small’ by nature,” they wrote, “and we’re fascinated by how people are subverting this particular trope of domesticity in order to draw attention to more progressive organizations and causes.” Now that many if not most restaurants and bakeries are closed, there are more amateurs picking up their whisks, and the Bake Sale Project wants to arm them with the tools needed to turn that home-baked talent into a project that can do some good in the world.

The Bake Sale Project, while still in its infancy, aims to provide would-be progressive bakers with information and tools they can use to raise funds for whatever cause they believe in. “We work to create an equitable, free, collaborative, inclusive, and radical framework for learning, engagement, and communal practices,” its website reads. “Think: an online library of templates, resources, collateral, recipes, contacts, videos, and more. Free talks, reflections from specialists, and engaged feedback in real time.”

Its goal is to make it easier for people who want to help but don’t know how, and the founders of the Bake Sale Project are aware that for some participants, removing capital from the equation and moving toward mutual aid is the ultimate goal. While it can be easy to look at bake sales and assume that in their fund-raising aspects they are purely capitalist endeavors, in much the way exhortations to support Black-owned businesses have been, there is some truth to the idea that bake sales can be a simple (and sweet) access point into direct action for people who haven’t previously been introduced to it.

“The most generous read is that it’s not only a capitalist impulse but an understanding that sustained divestment and investment of individual dollars can make an impact and mirror or encourage parallel changes in policy,” said Ruth Gebreyesus, a food writer for KQED in the Bay Area, who wrote a critique of those Black-owned business lists. “The least generous read is that these types of bake sales maintain a status quo through the anatomy of charity where both the benevolence and the wealth of a group of people must be appealed to. Reparations, resource transfers, and mutual aid, which don’t perpetuate that dynamic, are too confrontational for the fairly neutral bake sale space.” The successful branding of the bake sale as non-neutral, despite being a rather common means of exchanging capital, has been what’s compelling about its post-Trump makeover. Without explicitly advocating for more direct forms of resource sharing, it continues to be only a fundraiser.

Some bakers are more openly recognizing their place in political movements as a middleman who can extract and redistribute wealth, through sales of goods and other means. As Tiffany Lethabo King and Ewuare Osayande wrote in the essay “The Filth on Philanthropy” in the collection The Revolution Will Not Be Funded: Beyond the Non-Profit Industrial Complex, “What are the implications for a social justice movement in which power and resources are transferred based on one’s ability to develop a relationship with the right white people?” Even as mutual aid has become a robust reality, those relationships with people who have disposable income have remained key—and bakers tend to have that access, by the very nature of their work.

In Minneapolis, in the heart of the area where the recent Black Lives Matter protests began after the police murder of George Floyd, Dulce Monterrubio, who had recently closed her Dulceria Bakery, dedicated her resources to local aid. “I live very close to Lake Street where the epicenter of the uprising happened,” and when she saw that an effort led by Navigate Minnesota and seven other grassroots organizations needed funds, she reactivated her bakery’s Instagram page and raised $6,000 in 24 hours to provide not just food for local volunteers but diapers and other necessities as well for a community that had lost its markets.

The bakery’s Instagram site continues to be a local resource, sharing what is needed in Monterrubio’s community as well as calls for action to dial the City Council and tell it to abolish the police force. This hyperlocalized approach, born of baking, is the kind of activism that the Bake Sale Project has the potential to inspire.

And while it is only implied that the many people who participated in Bakers Against Racism or who will use the tools from the Bake Sale Project have politics aligned with words like “radical” and “inclusive,” the bake sale may be coming into its own as a force for good. As its many historical guises have taught us, the bake sale has not always been used to support the most progressive undertakings. A bake sale can be a first step toward justice-oriented action like mutual aid and reparations, even if it is not the last.