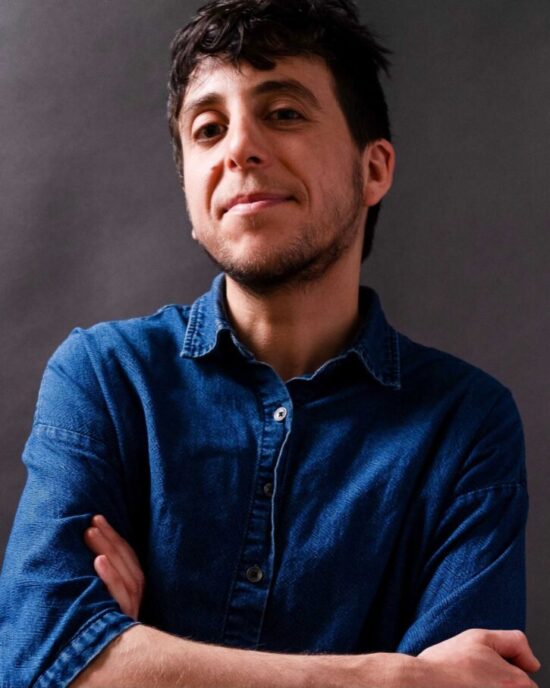 Author and Jewish Currents editor Ari Brostoff’s debut essay collection, Missing Time, is difficult to describe. Or rather, to describe what it is about does little justice to the work the book does. The book is an eclectic mix of left-wing cultural criticism and personal essays on topics like The X-Files, Bernie Sanders and feminist desire, Jewishness, and communism. But taken together, the essays do something more than tackle these subjects. By scrutinizing childhood recollections, cultural ephemera, and recent political shifts, Brostoff elucidates what, borrowing from philosopher Ludwig Wittgenstein, we might call a “form of life.” Through their essays, we see and share in the concepts, tendencies, and background apparatuses that allow them to make sense of the world. In Missing Time, Brostoff allows us to inhabit their rigorous, humorous, sometimes obsessive but always generous way of understanding this moment in history.

atasha I’d have difficulty doing this book justice were someone to ask me, “What’s it about?” How do you answer this question?

ri rostoff: I didn’t know this was going to be a book until close to the end of writing it. It’s made up of five essays, which I wrote over the course of four or five years. One thing that links them is how they’re written around the Trump presidency, although only the first essay is explicitly about electoral politics. The essays follow a moment of major political upheaval, and are trying to make sense of it in different ways. I also was going through a life shift during that period, from being a somewhat aimless grad student to trying to reconstitute myself as a different kind of writer while also starting a gender transition midway through. When I went back and wrote an introduction, attempting to make sense of these pieces together, I was really thinking about the structure of those ruptures, of being at the end of young adulthood and moving into straight-up adulthood, and being thrown into uncertainty. The book’s title, Missing Time, comes from the essay in the collection about The X-Files and my very intense relationship to that show when I was in middle school. “Missing time” is an expression often used by people who believe they have been abducted. They describe the feeling of missing time as a symptom, a thing they can point to as evidence that they briefly “left.” That also seems like a way that people talk about trauma. And I think that it’s an interesting way to think about the personal, phenomenological experience of historical rupture, in a collective social way.

NL: Sometimes it can only be in retrospect that one can see a through line of thought running through a collection of discrete essays. What are some of the threads, connections, or motifs you see running through these pieces?

AB: I think there are maybe a couple of different threads. One thread that I think comes out in the two most personal essays—“Missing Time” and then the final essay, which is about Vivian Gornick’s book The Romance of American Communism and also about my family—is that they try to make sense of how it happened that I was, almost a bit randomly, a very communist-identified child when I was about 11. I had some real utopian inclinations as a kid that were also very private. I had no concept of actual collective political life. A lot of my own coming into adolescence was about trying to make sense of how lonely I felt in that, but then also trying to figure out how to make it into a social experience, even if it was just in a subcultural way with my friends. This played into a nostalgic desire, too. I very much thought of the utopian horizon as something that had existed in the past and didn’t exist anymore. And I fervently wished that I had grown up in some earlier time, where I could still have that horizon in front of me, regardless of what was actually going to happen. I think that there’s a certain kind of irony, and even cynicism, that can grow out of that structure of feeling—wishing to have experienced the belief in a future that actually wasn’t going to come. Both those pieces are to some degree about the experience of growing up in the ’90s in the suburbs, in a time and place that really bought into the idea that history had ended and then later trying to make sense of what it felt like for history to sort of reopen.

Another thread is that the book is very Jewish, or it became very Jewish over the course of writing it. There was a real rupture that happened for me around Jewishness when I was in my early 20s and working for Jewish publications at which Zionism was sacrosanct. When I broke with that, I kind of gave up on being Jewish in public in a meaningful way—which for me meant giving up on the idea of being a Jewish writer. And then that really changed, largely through taking a job at Jewish Currents, the left Jewish magazine where I work now. So among the later essays in the collection, one is about Jeffrey Epstein and his weird eugenic fantasies, one is about Philip Roth’s agonistic relationship to Zionism and anti-Zionism, and then the final essay, on Gornick’s Romance, thinks about what it means to try and connect with the legacy of Jewish leftism as a family tradition when that’s not your actual lived familial heritage.

NL: During the period in which you wrote these essays, you yourself transitioned. But nothing in the book explicitly deals with trans issues. How do you feel, or do you feel, your personal transition informs the book?

AB: Transition itself is an experience of rupture, and I think the desire to transition can manifest as a desire for rupture. I’ve said at different points that I think of the book as a secret transition memoir. There’s no “trans essay,” but there are these little moments, like the fact that my name changes over the course of the book. I’m very curious about the idea of it being read that way, partly because that seems like the lure of writing a book that will exist on its own: The fantasy and fear that other people will read it and be able to tell you something about yourself that you didn’t know when you were writing it—and maybe you still don’t know.

It’s also worth saying that, to the extent that it is a secret transition memoir, it’s about the first stages of a transition—when I finished the introduction, I was only just getting to the point where I felt remotely legible to myself or anyone else walking around in the world. So that’s maybe part of the location of rupture in the book. I’m sort of like edging up to it, thinking, “Can I do this?” but not actually yet able to wrap my head around this new form of life.

The University Cannot Be Decolonized

NL: My favorite essay is your reflection on your childhood obsession and identification with The X-Files. And it’s a story about an American context in which The X-Files made sense as cultural posit, dealing in questions about belief—in empirical sciences and experienced magic—and how that shifted. You write of “the impossibility of The X-Files in a ‘postconspiracy’ age.” What do you think informed that shift? Do you see it as a harmful one?

AB: I would say The X-Files is about the struggle over those terms: science and magic. The conflicts in the relationship between them are the stakes of the show. On one level it’s a question about whether there’s an empirical explanation for everything—that’s maybe the way that Scully, the scientific rationalist in this dialectic, would put it. But I think Mulder, who’s the intuitive believer in paranormal activity, also makes a claim to doing a certain kind of empirical work. He’s just using different assumptions about what counts as evidence.

There’s something that feels kind of quaint about that now, which I think may be partly about the way the dawning reality of climate change has destabilized our ideas about science. The way the planet is reshaping itself in response to human activity is in the realm of the sublime—you could almost say it’s in the realm of the paranormal, in the degree to which it undoes the idea that nature is predictable or dependable. In the terms of The X-Files, you could say monstrosity has been unleashed. And at the same time, of course, all of this is happening very much on a material plain. The science/magic dichotomy kind of falls apart under those circumstances.

You could also put it in terms of the show’s relationship to history. The X-Files is very much about haunting—about the ways that histories of Indigenous genocide or other forms of state terror try to bury their traces but seep up into the present through ghostly effects. Every time Mulder and Scully open a case, you could say that they’re asking, “Are these effects metaphorical or are they real?” And even though there are sweeping plot arcs on the show that are trying to get to the bottom of these questions, there’s something about the episodic nature of how the questions are posed, or the fact that they can never be resolved, that falls short of capturing the reality that climate change has made unignorable: that very literally, very scientifically, the earth never forgets.

NL: You finished the collection and its introduction a year ago. How are you feeling now, space-time wise?

AB: The texts I look at in the X-Files essay, besides The X-Files, are my middle school journals. At some point in them, I described having a feeling, like a mix of depression and information overload, as turning me into something like a “dead circuit.” As I mention in the essay, it’s a feeling that first came up around the time we got an Internet connection in our house, and it’s a feeling that I still inhabit sometimes. Maybe a lot of us feel that way. The period of the last year or so has been personally transformative and politically depressing. Those things have a weird relationship to each other. There are organizing projects I’ve been involved in, particularly around tenant organizing, that I continue to feel excited about and which I love to be around. But I don’t think I know yet how to exist in this moment, in the Biden era, without feeling super overwhelmed by that mix of depression and overload. I think that during the Trump years, that total unpredictability produced a certain sense of immediacy. It is really hard to figure out how to continue to hold on to that immediacy without burning out or without getting addicted to that kind of crisis formation.

The School Board Culture War