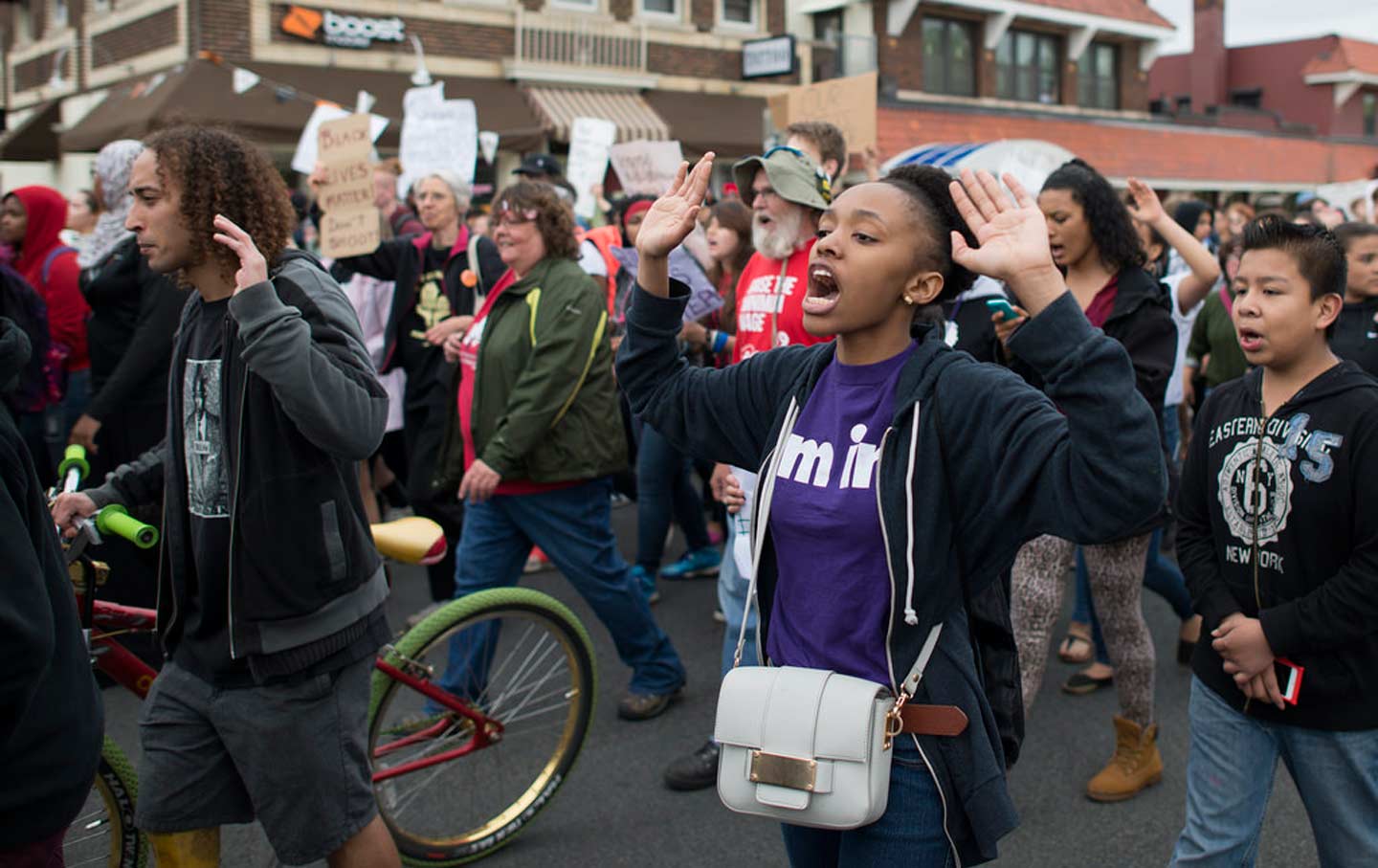 Now that primary season has wrapped up, what’s next for all the new, young, socialist-friendly voters? There’s Jill Stein, there’s “bust,” and there are calculations to make about Clinton, Trump, down-ballot candidates, and their parties and party factions. In the 2016-that-never-ends, there’s also the ongoing spotlight on anything election-related—making for a one-of-a-kind platform to amplify the issues that have turned people out in the first place.

That’s the backdrop for all the hell that’s about to be raised at the party conventions in Cleveland and Philadelphia. In this post, organizers from four different groups talk about why they’re making the trips. This post is the latest edition of the Nation’s student- and youth-organizing feature, edited by James Cersonsky (@cersonsky). For more, check out May 9 and June 20.

When Donald Trump becomes the nominee of the Republican Party in Cleveland this week, Mexicanxs, Latinxs, Chicanxs, and people of conscience will be there to give him the wall he campaigned for. It’s going to be beautiful. It’s going to be the best wall you’ve ever seen. Except, the wall won’t be on the border but surrounding the convention itself.

Parents, workers, veterans, ​artists, ​students, and ​community organizers brought together by Mijente, the Ruckus Society, and the Other 98% will form a symbolic line of defense against the hatred and racism of a Trump takeover and a line of offense in support of migrant and racial justice.

Mijente formed in 2015 to be a new political home for pro-black, pro-women, pro-queer, pro-poor Latinxs and Chicanxs. Across the country, we’re working to bring the movement to fruition. We stood with students to shut Trump down in Chicago and supported local groups to close the roads to his rally in Phoenix. Standing up to Trump’s hate is just one part of redefining civic engagement as more than a vote that’s suppressed by the right and taken for granted by the Democratic Party. It’s to say that Latinxs will not stand on the sidelines of history in this moment or go quietly as his campaign seeks to push us back across the border, back into the closet, and to the back of the bus.

Immediately after Cleveland, members of the #Not1More campaign will head to Philadelphia to raise the standards for what it means to be a “champion” for migrant rights. We’ll march with the local group, Juntos, to demand that the current administration shut down family detention and dismantle the deportation machine President Obama built up and will pass to whichever candidate is his successor. The fact that immigration authorities already jail mothers and children, deport Muslim detainees en masse, and each day refine the raids with which they terrorize our communities is clear evidence that Trump can’t be our only focus. Nor should he be an excuse for those who claim to be our “friends” to lower the expectations of what being an ally on our issues means.

Presidential campaigns are not where our power is won or lost, but, with the stakes this high, they’re also not something we can afford to ignore.

For the average black youth in Philadelphia, presidential candidates are only visible in the community during election season, armed with false promises. Meanwhile, more than 12 percent of the city’s population is in deep poverty, with income less than 50 percent of the poverty rate, double the national average. This includes a third of black Philadelphians.

In planning for the convention, we have engaged the least of those among us, who will have to deal with the consequences of the next president for the longest—parents of special-needs children who work two minimum-wage jobs, students trapped in debt, young black girls who used to feel sidelined but have found their place demanding, “black lives matter.” We’ve listened to people’s concerns, invited them to meetings, and asked them to take up leadership in determining our messaging. The result is a coalition of groups who are coming together to hand down a judgement on the entire United States government. At the convention and beyond, we won’t rest until black lives actually start to matter in this country.

Taking Back the Land
By Rossmery Zayas

At the age of 14, I became an organizer with Youth for Environmental Justice, out of concern for the well-being of my 12 siblings, mother, and neighbors. Now, at 19, I boarded a bus to Cleveland for the RNC to join 50 other organizers from across the continent for the “It Takes Roots to Change the System” People’s Caravan.

In Southeast Los Angeles, we live with Superfund sites, rendering plants, economically influential oil companies, EPA-listed air polluters, and diesel-truck pollution coming from the thousands of trucks that transport goods from the ports into our neighborhoods. It’s not uncommon to wake up to the sound of loud machinery, to close your windows because of disgusting odors, or to have to choose between where you work and your health. These practices just don’t happen in places like Beverly Hills, and it’s no coincidence. This is environmental racism.

For years, young people from Communities for a Better Environment, East Yards Communities for Environmental Justice, and other local groups challenged a multibillion-dollar battery-recycling plant, Exide Technologies, that contaminated thousands of homes with lead. About 90,000 people throughout Southeast and East Los Angeles have suffered severe health consequences from the company’s recycling of 22 million lead car batteries every year—41,000 batteries per day. For three decades, local agencies turned a blind eye to the facility’s illegal practices that accrued fines surpassing $500 million dollars. As young people, we organized marches, vigils, and press conferences, worked with legislators and county officials, testified in Sacramento, and fought for policies like SB812 and SB673 that eventually succeeded in shutting down the plant. As part of the settlement, the company was required to pay $50 million for a state-supervised pollution cleanup, including $9 million to remove lead contamination from homes.

The fight is far from over. Recently, just a few streets down from Exide, mislabeled chemicals and unpermitted operations led to a magnesium-fueled fire, impacting those whose yards are already labeled toxic waste dumps. We’re demanding that our local agencies include the community in the cleanup process. We are also demanding accountability and tighter regulations from local and state representatives, who allowed this all to happen without taking action.

We cannot expect leadership from those who think with their wallets and are disconnected from the communities they serve. We also need to continue emphasizing the importance of coalition and intersectional work. This is the power of the People’s Caravan. We’ll be holding actions at the closing of the RNC and, with representatives of COPINH and Berta Cáceres’s family, during the DNC. Cáceras’s struggles for protecting the people—violently repressed by militias under Hillary Clinton’s watch—continue to be our struggles.

The caravan is a call to action from communities of color and white folks to confront the growing acceptance of racism and xenophobia; from womyn and trans people to reclaim feminism for the grassroots; from veterans and organized communities around the globe to end US military intervention; from those on the frontline of polluting industries to build a new economy; and from the generation suffering the consequences of these growing norms, even after the next president is elected. We are fighting for our people, rediscovering our roots, and reclaiming our land.

Turning Up the Heat
By Maximilian Cotterill

This year, NextGen Climate is working on more than 200 campuses across seven battleground states to turn out young people in record numbers, flex our muscles, and show candidates that they have to take climate change seriously if they want to get elected. We’ll be using innovative technology and tactics to register, engage, and make college students a force in the 2016 general election. The scale of the campus program is unprecedented by any non-candidate campaign, and will show the size and scope of the enthusiasm for climate action among young voters.

This week’s GOP convention is a crucial element of these efforts—an opportunity to build our movement for the long term by creating lasting, local student organizations—and a moral imperative.

Understanding the “movement moment” requires an understanding of the unique political context in which we reside: Carbon emissions spiral dangerously, and temperatures across the world reach record highs; the national student-loan debt tops $1.2 trillion nationally; black and brown people continue to be incarcerated in record numbers and gunned down at rates far exceeding their share of the population. The urgency of the moment demands urgent action.

NextGen Climate is partnering with CREDO, People’s Action, United We Dream Action, and a host of other progressive organizations to help mobilize a day of nationwide action this Thursday, July 21 to protest the nomination of Donald Trump. We are helping to organize dozens of simultaneous actions at local Republican Party offices, Republican elected officials’ offices, and the offices of corporations sponsoring the RNC. These actions are an opportunity for people to express their opposition to Trump and the Republican Party’s hate-filled agenda—and to continue building our movement’s power.

For many college students who took their first step into activism during this primary campaign, mobilizing in opposition to Trump at the RNC is both a moral obligation and a chance to test and expand their power with an eye towards organizing for the long term.