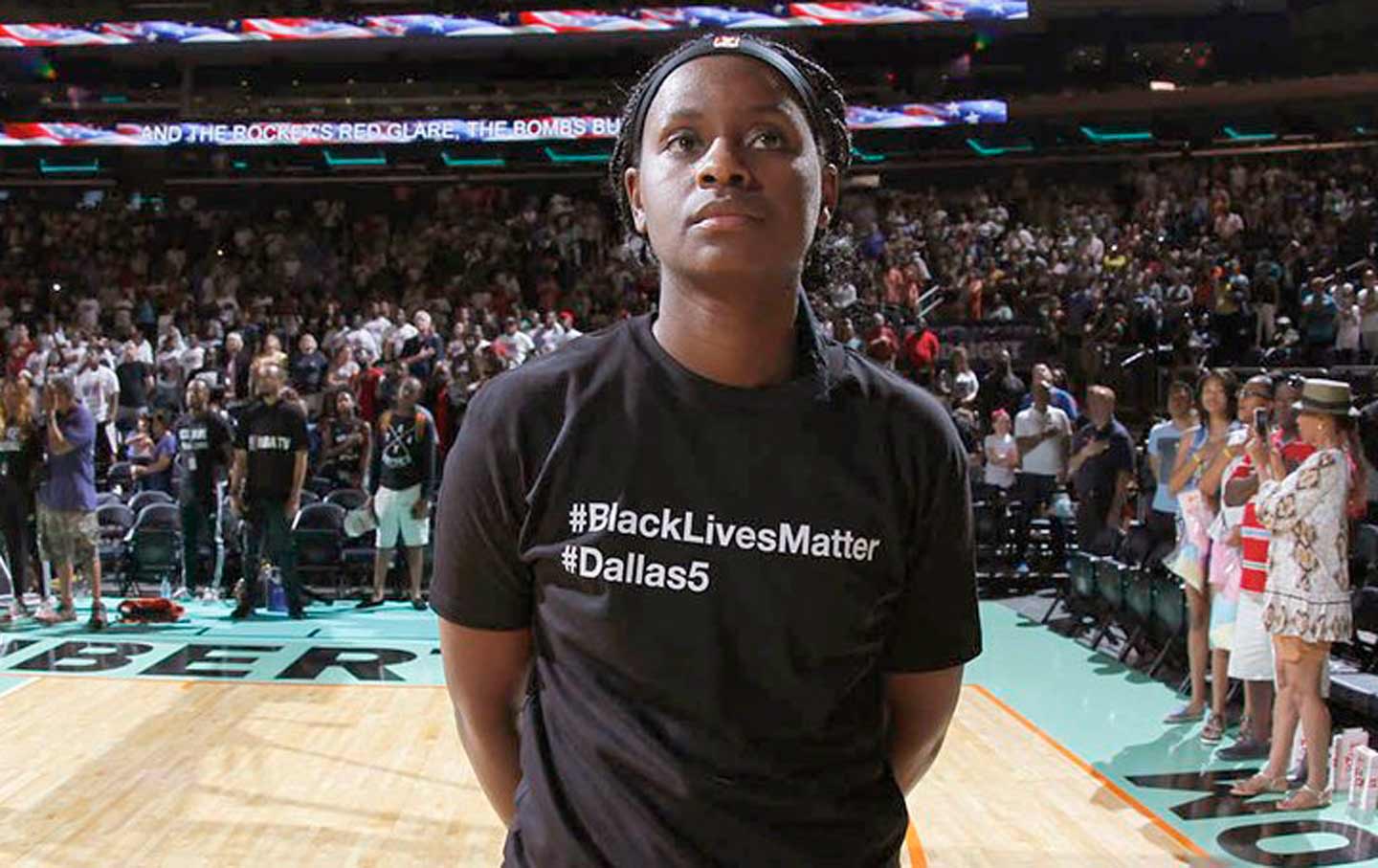 In 2010, the entire Phoenix Suns team wore shirts that read Los Suns as a statement of solidarity with the Latino people in Arizona threatened by the brutal anti-immigrant bill, SB 1070. That was the first time, according to my own research, that a professional US sports team undertook a united political stand that was sanctioned—or at least not shut down—by both coaching staff and upper management. Then in 2012, the Miami Heat posed in hoodies to protest the killing of Trayvon Martin at the hands of George Zimmerman. In 2014, several NBA teams wore shirts emblazoned with the slogan “I Can’t Breathe,”the last words of Eric Garner as he was being choked to death. Management may not have sanctioned these acts, but it sure as hell was not going to stop them.

Now two more teams have come together to make a political statement. The Minnesota Lynx and the New York Liberty of the WNBA have chosen to advocate an idea that really should not be radical but somehow is, in the United States of 2016: the idea that black lives matter. The Lynx wore jet-black warm-up shirts that read on the front, “Change starts with us—Justice & Accountability.” On the back of the shirt were the names Philando Castile and Alton Sterling, both shot and killed by police officers last week. Castile’s died just a short drive from where the Lynx play, in the suburbs of St. Paul. The back of their shirts had a small Dallas police star for the police officers killed last Thursday, right over the phrase, “Black Lives Matter.”

Before the game, team captains Maya Moore, Rebekkah Brunson, Lindsay Whalen and Seimone Augustus spoke to the media. Moore said, “If we take this time to see that this is a human issue and speak out together, we can greatly decrease fear and create change. Tonight we will be wearing shirts to honor and mourn the losses of precious American citizens and to plead for change in all of us.”

On Twitter, the team’s (white) coach Cheryl Reeve wrote, “To rebut BLM with ‘All Lives Matter’ implies that all lives are equally at risk, and they’re not. #BlackLivesMatter doesn’t mean your life isn’t important if you aren’t black—it means that Black lives, which are seen without value within White supremacy, are important.”

Then there is the New York Liberty. Before their game on Sunday against the San Antonio Stars, the entire team wore T-shirts with the words #Blacklivesmatter and #Dallas5 on the front and a blank hashtag on the back. That blank hashtag was, according to the indispensible WNBA blog Swish Appeal to show the importance of “creating a new hashtag everyday [that] will help continue to spread the word.” But it could also have been a statement that too many black men and women have become, in death, hashtags, and we do not know the name of the next one, only that it is coming and will continue unless something changes.

After the game, five players walked into the media room and explained why they took this step. Liberty star Swin Cash said to the press, “My husband is 6-6, 220. If my husband gets pulled over when you look at him, does he make you scared? Is something going to happen to him? Those are things that go on in my head.”

These kinds of stances actually make a difference. They legitimize people’s anger and right to resist at precisely the moment when people in the mainstream media and politics are trying to disrupt and distort a growing movement. They also matter because these are public and visible displays of real solidarity: white players joining with their black teammates,wearing the same shirts and standing alongside them in a show of multiracial unity against anti-black bigotry.

The white men in sports could learn something from these women. Stand with your teammates. Take on some of the weight. Give them political cover as the haters and bigots descend upon them. It’s not complicated. If your team really is a family, then you should care about the lives of your sisters and brothers. The Lynx and the Liberty are showing what solidarity looks like. The men need to take a lesson.