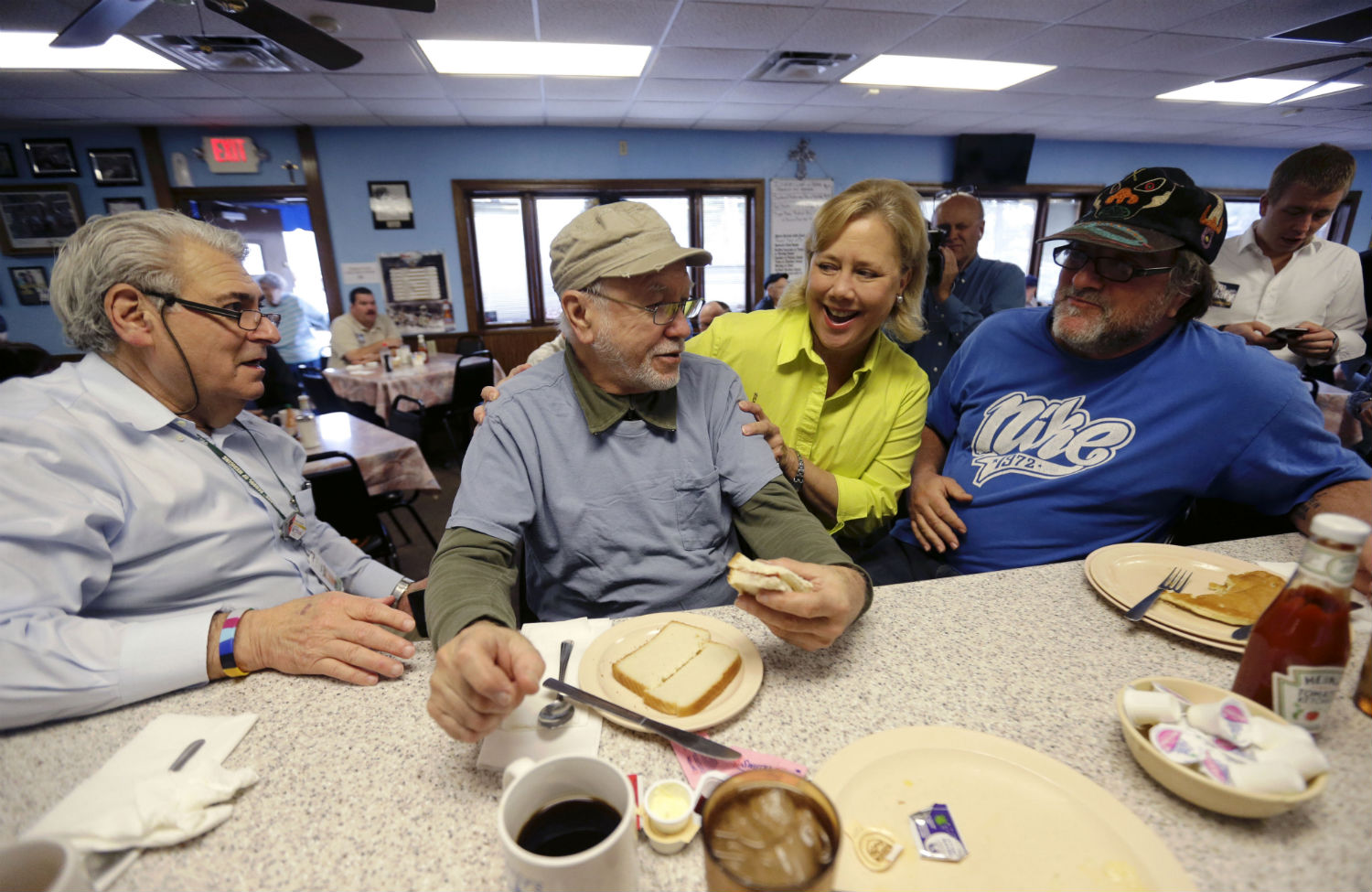 One place you can’t lay blame for the Democrats’ trouncing last night: at the feet of black voters. That demographic made up 12 percent of the vote last night, up 1 percent point from the 2010 midterms and on par with turnout in the 2008 presidential election.

African-Americans—the one group Democratic strategists deployed Obama to motivate—responded yet again to pleas for participation and showed up at the polls in states with hotly contested Senate races. Yes, incumbent Kay Hagan lost her Senate seat to Republican challenger Thom Tillis—a frequent target of the multiracial Moral Mondays movement—but it’s not because black North Carolinians stayed home. There, black voters made up 21 percent of the electorate, up slightly from 2010 and matching 2008 turnout. In Georgia, where Democrat Michelle Nunn lost to her bid for Senate to Republican David Perdue, black voters made up 30 percent of the electorate, down just a tad from their 32.4 percent vote share in the last midterm. Thirty percent of voters were also black in Louisiana, where we still don’t know whether Senator Mary Landrieu won re-election.

As was the case in Georgia and in other racially diverse states where Democratic candidates for Senate and the governor’s office were trounced last night, the issue wasn’t whether or not Pookie (the president’s favorite election-season punching bag) stayed on the couch. It was candidates’ failure to win the votes of the elusive white swing voter. They also failed to motivate the 63 percent of eligible voters (not all of whom are Cousin Pookie, I assure you) who stayed away from the midterms.

Here’s one idea why the Democrats lost swing voters and failed to attract many new ones: because they didn’t say anything of substance. White voters want something more than bromides, and the voters of color whom the Dems have come to take for granted deserve it. What would have been the outcome yesterday if Democrats had directly spoken to working-class and impoverished voters being crushed by the economy and by harsh policies that penalize poor people? After all, bold initiatives that unabashedly set out to benefit low-wage workers and people caught in the jaws of the criminal justice system won big Tuesday. Minimum-wage hikes in Arkansas, Nebraska and South Dakota passed, as did California’s Prop 47, which challenges mass incarceration by reducing some petty crimes now classified as felonies to misdemeanors. New Jersey reformed its bail system, a move that will mean pretrial release for low-income, low-level offenders who sit in jail because they don’t have thousands of dollars at their disposal. Washington, DC, voted to decriminalize marijuana, a move that could shift policing in the district, given that black residents there are eight times more likely to be arrested for possession than white residents, despite equal use of the drug across race.

Democratic candidates seem to assume that those are the types of issues that only motivate the types of voters they already have in the bag. So they opt instead for mealy-mouthed nothingness, a play for the middle in the quest to wrest white undecideds from the hands of Republican candidates. But as Zaid Jilani pointed out in his close look at the Georgia Senate race, this type of calculation will continue to lead the Democrats to crushing defeats in that Southern state and in other parts of the country where demographics are shifting rapidly:

Georgia’s white residents are 55 percent of its population, down from 72 percent in 1980…. It has all the makings of a future progressive bastion, led by a robust political coalition of young people, racial minorities and women. But for this midterm election, the script is decidedly unprogressive. The Democratic candidate is campaigning via a Third Way algorithm, churning out rhetoric about bipartisanship and being pragmatic. The issues that animate actual Georgians—56 percent want to raise the minimum wage to $10.00 an hour and expand Medicaid—are only on the fringes of the campaign.

It’s time for issues like these to move from the margins to the center of Democratic candidates’ platforms. Clear solutions to entrenched social problems aren’t over voters’ heads—in fact, they just may be what can motivate that lion’s share of eligible voters that stays home. But too many Democrats operated from the assumptions that less was more when it came to substance this election season. They lost big as a result.

Next time around, Democratic candidates should advocate explicitly and passionately for the types of economic and social issues that bring that reliable base of black voters to the polls. In doing so, they may reach a broader segment of Americans who are just as desperate for candidates with a spine and a substantive vision.