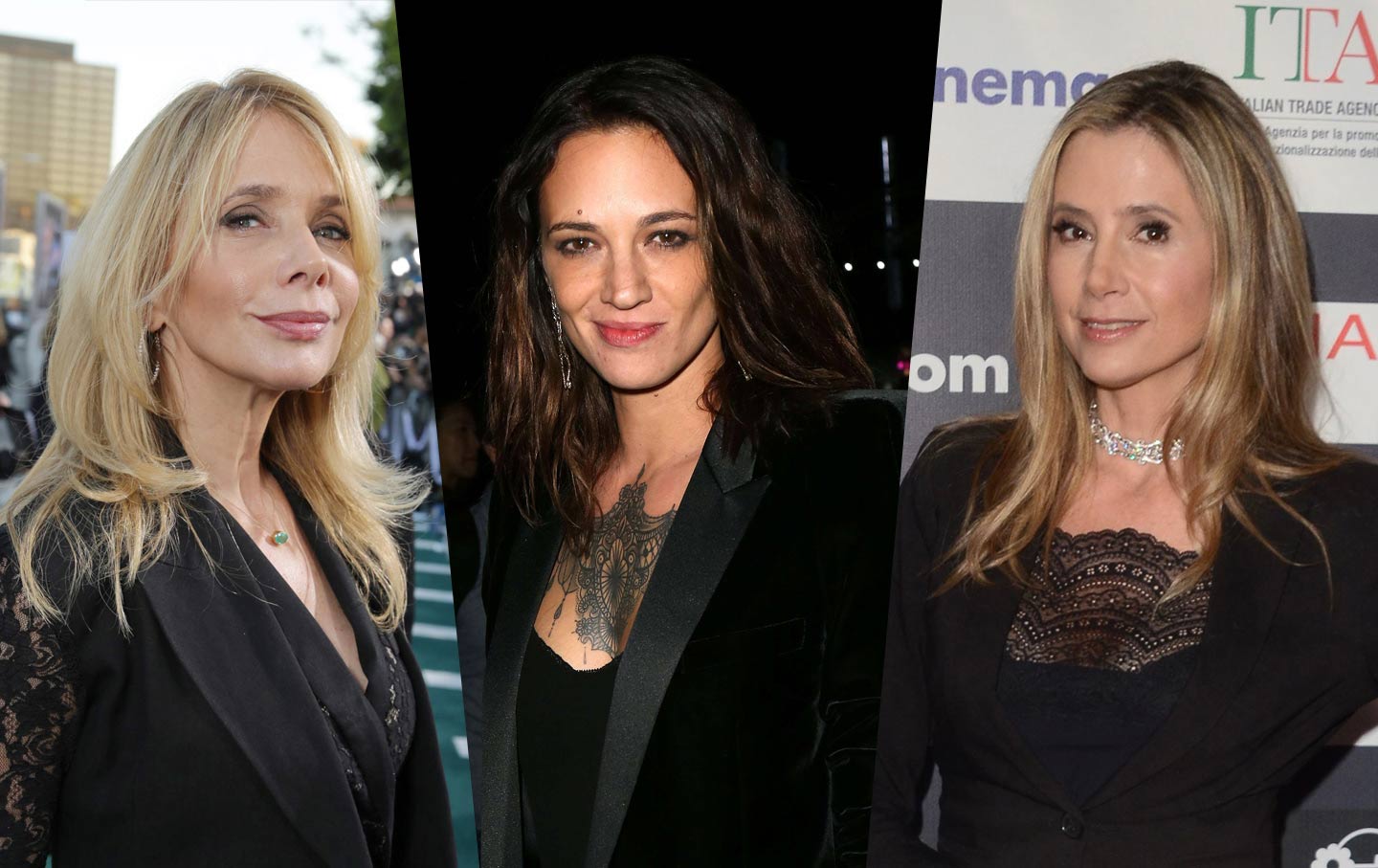 Oh, Harvey, Harvey, Harvey. Hardly had we ushered Hugh Hefner off to the great whorehouse in the sky than the Harvey Weinstein horror show broke over our heads. I have read so many articles, op-eds, Facebook posts, and tweets about Weinstein’s disgusting molestations that I feel as though I could open my closet and there he’d be, masturbating into my sweaters. There were a thousand pieces attributing his behavior to Hollywood—its maleness (“You felt alone, in a sea of men,” director and actress Sarah Polley wrote in The New York Times), its worship of wealth and success, its tolerance of bullying and coerced sex, its armies of lawyers and publicists and journalists ready to destroy women who speak out. There were almost as many pieces blaming Weinstein on the Democrats—look at Bill Clinton, look at this picture of Hillary standing right next to Weinstein at a gala, look at what a big donor he was (the more than $1.4 million he gave to Democrats over 26 years averages out to less than $54,000 annually—not nothing, but hardly Koch-level largesse). There was Harvey’s own explanation—”I came of age in the ’60s and ’70s, when all the rules about behavior and workplaces were different”—which is hilarious because Harvey is a few years younger than me, and believe me, greeting job aspirants naked was not in the office handbook back then. Times columnist Bret Stephens bought it, though: “Like those other libidinous cads—Bill Clinton and Donald Trump—Weinstein benefited from a culture that often celebrated, constantly depicted, sometimes enabled, seldom confronted, and all-too frequently forgave the behavior they so often indulged in.” But sexual harassment is no more an invention of the 1960s than priestly pedophilia, which conservatives also love to blame on the era of peace and love. The New Partridge Dictionary of Slang reports the first usage of the phrase “casting couch” in 1931.

Well, this late into the story I have nothing very new to add. Obviously, it’s not just Hollywood: Every kind of woman, in every profession, gets harassed and worse. Waitresses, hotel housekeepers, salesclerks, stay-at-home moms, journalists, doctors, scientists, and IT specialists—Silicon Valley, land of geeks and gamers, is apparently notorious. Women are harassed in prisons and palaces, by their work superiors and their colleagues, and by strangers in the street. Gorgeous women are molested, and so are the ordinary-looking; women dressed in miniskirts and feathers, women in jeans and sweatshirts, women in burkas. Women who go to business meetings in hotel suites, and women sedated in the dentist’s chair or lying in a coma in the hospital. And it’s not just Republicans or just Democrats either, although it would be nice if more people pointed out that Donald Trump was accused of sexual assault by 15 women, boasted of pussy-grabbing on tape, was accused of rape by Ivana Trump in her divorce  deposition—and is sitting in the White House today. Anyone who voted for Trump has no right to be shocked and horrified by Weinstein. They are the same. The problem isn’t one industry or one kind of politics or one kind of woman. It’s men. 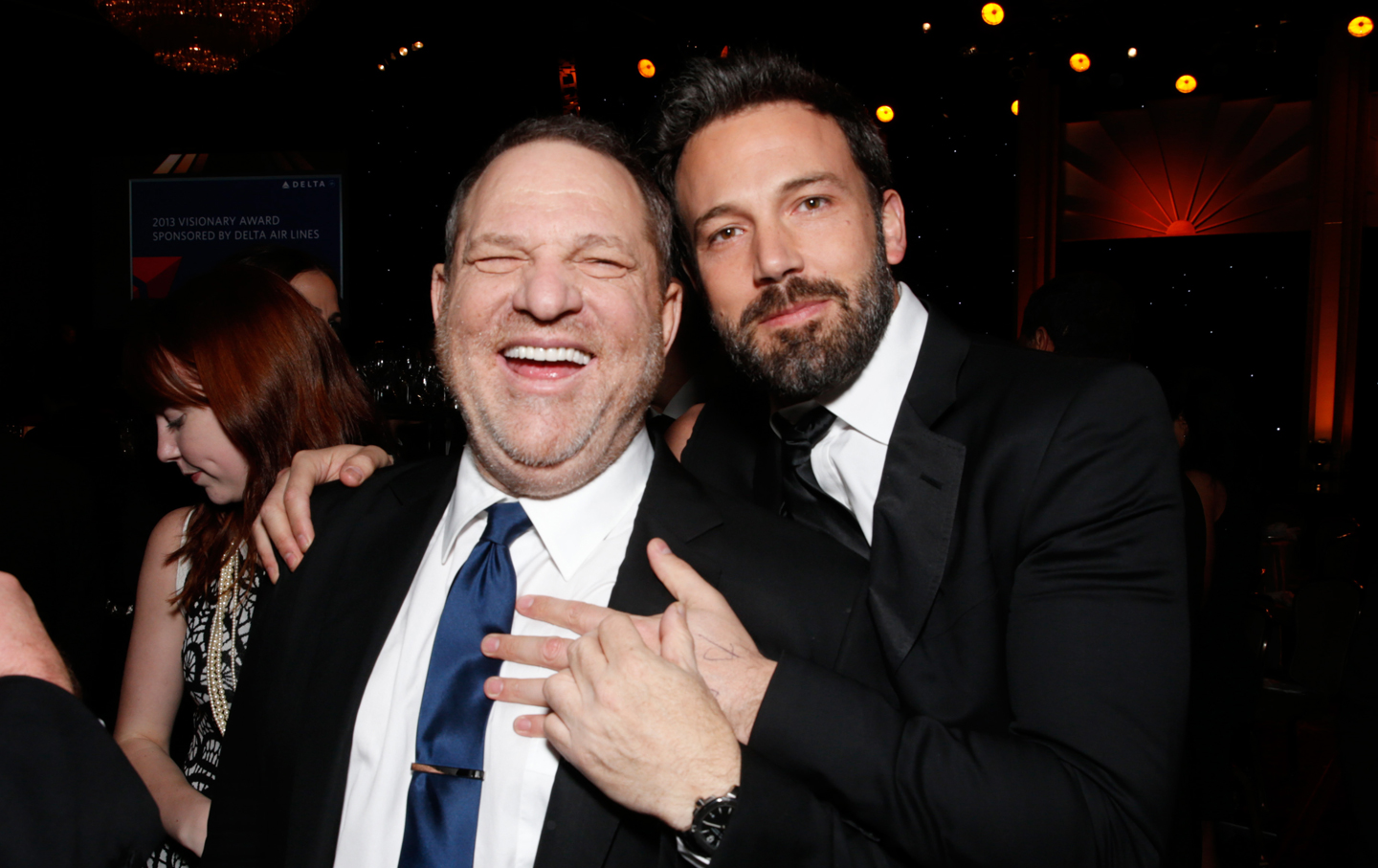 The optimistic take is that the Weinstein revelations are going to change everything. Women will be empowered to speak up; villains will be ostracized, losing out on jobs, awards, and acclaim, if not punished by law. Indeed, women are sharing their fury in op-eds and on listservs and with the #MeToo hashtag, which has been tweeted more than half a million times. A spreadsheet, removed after a moment online but circulating via e-mail, lists men in the media and their alleged misdeeds, ranging from rape and choking to “creepy” direct messages. Yes, I too worry about false charges or gossip landing someone on the list, but what are women supposed to do? Pussy will grab back.

Jessica Valenti is hopeful: “I truly believe this will be a turning point. We are starting to get to a place where people believe women.” That would be amazing. Could this be the rare moment when change happens seemingly overnight? But that’s what people expected after Anita Hill accused Clarence Thomas of sexually harassing her, and that was over a quarter-century ago. Thomas got his seat on the Supreme Court; Hill was famously vilified as “a little bit nutty and a little bit slutty”; her nemesis Joe Biden became a feminist darling by sponsoring the Violence Against Women Act before going on to become vice president; and harassment continued as before. More recent malefactors have done all right too: Bill Cosby got a hung jury; Roger Ailes lost his job at Fox News but got $40 million to go away; Bill O’Reilly lost his job at Fox after he and the network spent $45 million in settlements over the years, but he has appeared on Hannity and is one of the most popular writers in the country. We seem to agree that harassment is pervasive and that the victim might even be telling the truth—but also that she probably did something to bring it on, and that whatever happened wasn’t so awful that a man’s life should be ruined over it, especially if we like him. That a man should be able to move forward unimpeded is the whole point of the nondisclosure and non-disparagement agreements that are so common whenever a victim seeks justice. Even a recording of Weinstein admitting to having groped model Ambra Battilana Gutierrez wasn’t enough for Manhattan DA Cyrus Vance Jr. to bring charges. After all, Weinstein’s defense claims, he was evaluating her potential as a lingerie model and needed to feel her breasts to see if they were genuine. Combine that with Gutierrez having dropped a previous charge of sexual assault in Italy, which no true victim would ever do, and admitting that she’d attended, if unwittingly, one of Silvio Berlusconi’s “bunga bunga” parties, and what was Vance supposed to do?

Somehow the truth opens a door, and light pours through. Then, as if it would beam into too many dark corners, we close that door again.

Editor’s Note: This piece has been updated to reflect the most recent harassment settlement made by Bill O’Reilly, which was not public at press time.