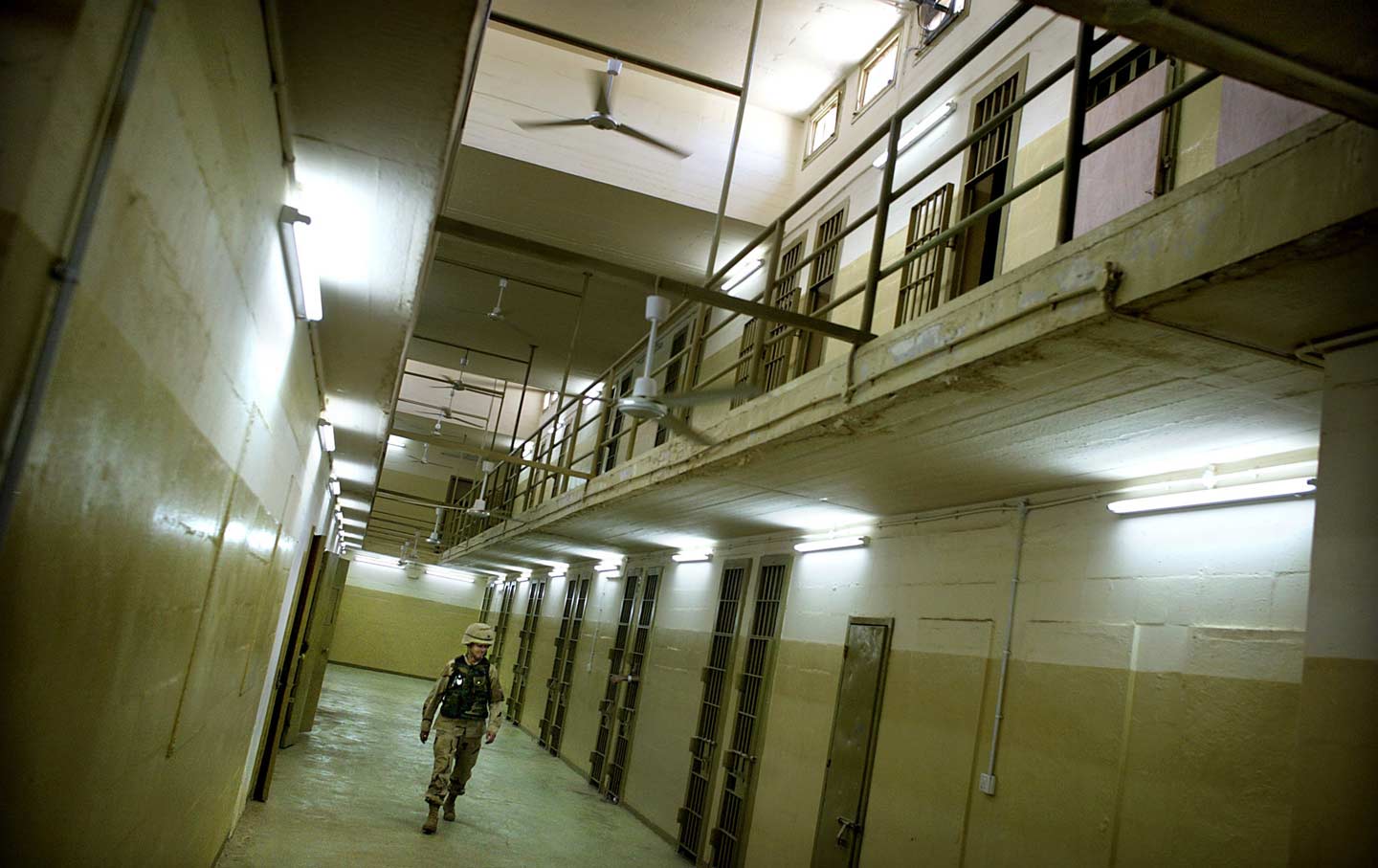 A US soldier walks between cells holding Iraqi detainees at the Abu Ghraib prison outside Baghdad on May 17, 2004. (AP Photo / Damir Sagolj, file)

It’s been 13 years since interrogators and military police at Abu Ghraib prison tortured detainees, and 12 since the abuse, captured on film, was disclosed to the world. It’s been even longer since a pair of psychologists, James Mitchell and John Jessen, developed torture tactics for the CIA’s interrogation of “high-value detainees” who had been disappeared into secret prisons. There is little doubt that the tactics employed at Abu Ghraib and by the CIA were not just illegal, but war crimes. They intentionally inflicted severe and wanton abuse, humiliation, and pain on detainees under our control. Federal and international law alike absolutely prohibit such treatment. Practically no one other than Dick Cheney seriously defends the CIA’s tactics, and even Cheney won’t defend what happened at Abu Ghraib. Yet apart from the court-martial of a few low-level soldiers at Abu Ghraib, no one has been held accountable for these wrongs. Two recent cases suggest that, finally, this may change.

In late April, a federal district court in Washington State ruled that a lawsuit filed by the ACLU on behalf of torture victims against the psychologists Mitchell and Jessen could proceed. And on May 12, a federal court of appeals in Richmond, Virginia, will hear argument for the fourth time in a case filed by the Center for Constitutional Rights seeking to hold military contractor CACI Premier Technology, Inc., liable for the torture its employees inflicted at Abu Ghraib.

In both cases, the defendants argue that even if they were responsible for torture, their victims’ claims present a “political question” immune from judicial review. The federal court in Washington rejected that argument; the district court in the CACI case accepted it, and the court of appeals is now reviewing that decision. But the answer should really not be in doubt. To say that torture is a political question is to assert, contrary to Congress and international law, that torture remains a policy option.

The Obama administration has not supported the defendants’ claim that the decision to torture is a political one.

The “political question” doctrine recognizes that some issues are not appropriate for judicial resolution. The Supreme Court has ruled, for example, that it cannot review the impeachment of a federal judge, because the Constitution makes the impeachment decision a political one, vested in Congress. It has similarly determined that how long a constitutional amendment remains open for approval is a political, not a legal, question, as is the president’s decision whether or not to recognize a foreign government. These questions are to be resolved politically, by our elected representatives, not by the courts. They are matters of political discretion, not legal judgment.

Torture and cruel, inhuman, or degrading treatment, by contrast, are not committed to the political branches’ discretion. As the district court in Washington recognized, the very fact that Congress has made torture a crime and, under the Torture Victim Protection Act, grounds for a civil action for damages, refutes the notion that it is an inappropriate subject for courts. The fact that at the margins it may be difficult to decide whether particular actions constitute torture or cruel, inhuman, or degrading treatment does not make them “political questions.” Courts every day must decide whether particular conduct meets statutory definitions; that is what they do.

The district court in the CACI case ruled that because the military supervised the contractors at Abu Ghraib, the case must be dismissed as political because it would necessitate judicial intrusion on sensitive military judgments. But in doing so, it relied on cases that alleged only negligent action by contractors engaged in otherwise lawful and authorized military operations. The torture claims, by contrast, maintain that the contractors acted beyond the military’s authority altogether, because there is no authority to torture. The distinction is essential. The detentions at Guantánamo, for example, were clearly supervised by the military. But as the Supreme Court made clear, that does not make them immune from judicial review. Where individuals claim that a contractor, or indeed the military itself, has violated an express legal prohibition, it presents a legal, not a political question. If federal courts can decide whether a military detainee has been imprisoned in violation of the law, surely they can decide whether he was tortured in violation of the law.

Notably, the Obama administration has not supported the private defendants’ claim that the decision to torture is a political one committed to the executive branch. On the contrary, in 2012, in a previous appeal in the CACI case, the administration filed a brief saying that the torture claims should go forward, precisely because federal law expressly prohibits torture. Because torture is not a policy option, it cannot be a political question.

If CACI or the psychologists are ultimately held accountable, it will be a beginning, not an end. There were many hands in these crimes, and responsibility extends all the way up to President George W. Bush. Thus far, the courts have been reluctant even to take up cases seeking to attribute responsibility. These cases suggest that the tide may be turning.