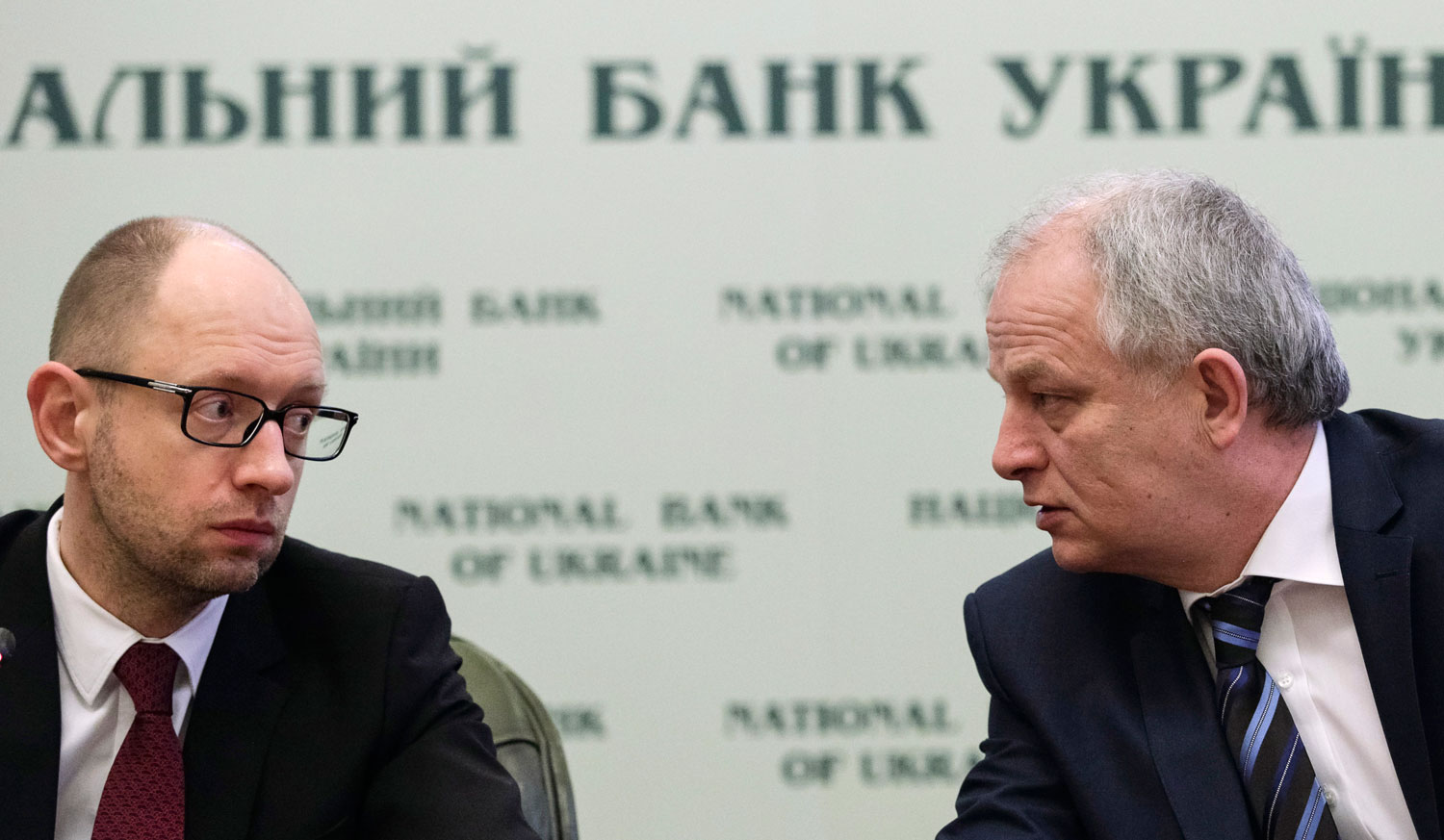 When the International Monetary Fund announced a tentative loan agreement with Ukraine last month, the move was widely acclaimed as vital to saving the country’s struggling economy. Headlines trumpeted the decision to “help” Ukraine with a $14–18 billion “financial lifeline.” In Italy later that day, President Barack Obama called the deal a “major step forward” that will “meet the needs of Ukrainian people over the long term.”

But the news headlines and political statements only tell half the story: The IMF loan comes with demands for “economic reforms,” i.e., austerity measures, that will be borne by the working-class Ukrainians, one-fourth of whom already live below the poverty line. It is this imposition of conditions, which have grown more numerous in recent loan deals, that led the European Network of Debt and Development to call in a report last week for reform of the IMF.

The IMF conditions for Ukraine won’t include any debt relief, and unlike the European Union-IMF bailout for Cyprus, they won’t impose any haircuts on the country’s creditors. Instead, the IMF recipe hinges on cuts to subsidies and social services and a floating exchange rate that will sink purchasing power even further. Kiev has already started to implement all of these measures. According to economists, the result will be growing poverty, reduced social benefits and an extended recession. In fact, the economic prognosis sounds a lot like Greece, which, four years after the start of an EU-IMF loan program, is suffering from 27 percent unemployment and rising risk-of-poverty rates.

Ordinary people will be the undisputed losers in Ukraine, since they’ll pay for the so-called reform program rather than the oligarchs who continue to freely move billions of dollars to offshore tax havens. The biggest winners will be currency speculators; Western banks whose loans will be repaid via austerity measures; and European corporations who will gain access to the country’s markets and cheap Ukrainian labor under an EU association agreement set to be signed in May.

Sergei Kiselyov, an economist from the school of political analysis at the Kiev-Mogilyanskaya Academy, said although austerity measures may eventually help end the country’s ongoing recession, first they will drag down GDP for at least the next two years. “But the population is paying for this struggle against the crisis,” Kiselyov said.

“You don’t need to predict an economic collapse; it’s already going on,” said Vasily Koltashov, an economist at the Moscow-based Institute of Globalization and Social Movements, referring to rising deficits and stagnant growth over the past two years. “The measures of the IMF and Ukrainian government will not do anything to solve the crisis, because they do nothing to raise standard of living and protect Ukrainian industry.”

The IMF economic reform program will unlock up to $27 billion in loans when it is approved this month, assuming Ukraine adopts a “strong and comprehensive package of prior actions,” according to an IMF statement.

In the first “prior action” for the IMF loan, Ukraine’s state-controlled natural gas provider Naftogaz raised its subsidized gas prices for consumers by 50 percent starting May 1. (Gas and heating prices will increase by 120 percent over the next four years, Prime Minister Arseny Yatsenyuk said last week.) According to Kiselyov, even more painful will be the accompanying 40 percent gas price hike for local heating companies. Starting on July 1, this will raise the average cost of heating a standard fifty-square-meter apartment from about 200 hryvnia to 280 hryvnia (from $18 to $25) per month. It’s a significant hit, considering that the average monthly wage in Ukraine is only about 3,150 hryvnia ($275), more than half of which typically goes toward food, Kiselyov said.

The second step in the austerity program came into effect on Tuesday— a law raising property and excise taxes and cutting social expenditures. The cuts include a 10 percent reduction in pensions for former government employees, decreased benefits for families with newborns and reduced numbers of law enforcement and state prosecutor employees.

Finally, a budget law signed on Tuesday increases government borrowing, while freezing the minimum wage and cutting the pension fund by 4 percent. In addition, Yatsenyuk said that despite rising prices, the poverty line won’t be increased this year, meaning the numerous social benefits based on that index will also be frozen.

All these reductions in subsidies, of course, will decrease consumer spending and strike another blow to GDP.

But the most painful of the IMF demands is a free-floating exchange rate that’s already being implemented, which will contribute to soaring inflation. Estimates continue to be revised: the National Bank of Ukraine is now forecasting inflation of 12 to 16 percent this year, and the Royal Bank of Scotland now predicts the hryvnia will fall to 12.5 on the dollar by the end of the year, after starting at 8.23. Ukraine’s imports have long exceeded its exports, and the hryvnia devaluation will lead to price increases of up to 30 percent on imported goods in the near future, business newspaper Kommersant reported.

The combination of falling wages, growing inflation and gas, water and electricity price hikes will further reduce the purchasing power of Ukrainians, lower the standard of living and push even more people into poverty, according to economists. “I don’t think half the population will live below the poverty line, but the majority of the population will be worse off economically—that’s understood,” Kiselyov said.

“Ukrainians differ from the Portuguese and the Greeks because they don’t have many savings left,” Koltashov said. “Wages now in Ukraine are, as a rule, not enough to feed a family, and the devaluation of the hryvnia will make it totally impossible.”

Inexplicably, the IMF-backed reforms have yet to touch two major areas that could significantly reduce the government’s deficit: tax loopholes (and huge capital flight to tax havens) and the corrupt government procurement sector, which loses up to $4.6 billion each year, Kiselyov said. But this is not so much a bailout for Ukraine as it is for Western banks.

Meanwhile, currency speculators will be able to profit from fluctuations in the hryvnia. And multinational corporations stand to benefit from privatization of those state assets that haven’t already been sold off. The IMF statement’s goals of “attracting new investment” to the energy sector and “restructuring” of Naftogaz hint at privatization to come, and government officials have dutifully responded with proposals to sell off coal mines and parts of the gas company.

Progressive thinkers have interpreted the IMF program as part of a larger strategy to alleviate economic crises in the West. According to New School University professor Richard Wolff, austerity in countries like Greece and Ukraine will “concentrate [economic] decline…in order to slow or disguise it elsewhere.” This decline is caused by companies moving production from North America and Europe to Latin America and Asia.

At a February conference in Brussels organized by the Post Globalization Initiative, analysts, journalists and activists from Ukraine, Russia and other European countries discussed how the neoliberal polices promoted by the EU and IMF will remove trade barriers for European companies in Ukraine and encourage the flow of cheap Ukrainian labor to Western Europe, cutting wages and increasing corporate profits.

The Brussels conference also discussed the lack of a strong, unified progressive force in Ukraine that could push back against both neoliberal policies and the rising influence of ultranationalists. Since then, organizing a progressive front has been complicated further by disagreements within the left over the legitimacy of the new Kiev government, the importance of Ukraine’s territorial integrity and the role of Russia in the crisis. The Marxist group Borotba, which continues to agitate against workers’ rights violations, has drawn accusations of supporting Russian imperialism with their protests demanding a referendum for regions to decide their own status.

Within Ukraine, the strongest counter to the EU-IMF agenda seems to be the largely pro-Russian separatist movement. In Odessa in the west and Lugansk in the east, demonstrations against European integration and in favor of joining Russia have drawn thousands of people in recent weeks. But protest signs like one reportedly seen at the Lugansk march reading “Europe is Sodom and Gomorrah” raise doubts that this movement is motivated primarily by socio-economic concerns.

Still, rising poverty caused by IMF reforms could drive more people to openly resist the Kiev government, Koltashov said. “This may take on a pro-Russian tone, not because Russia is good and is calling them to do it, but because people see Crimea joining Russia as a way to jump off a burning train, to get out of the Ukrainian crisis,” he said.