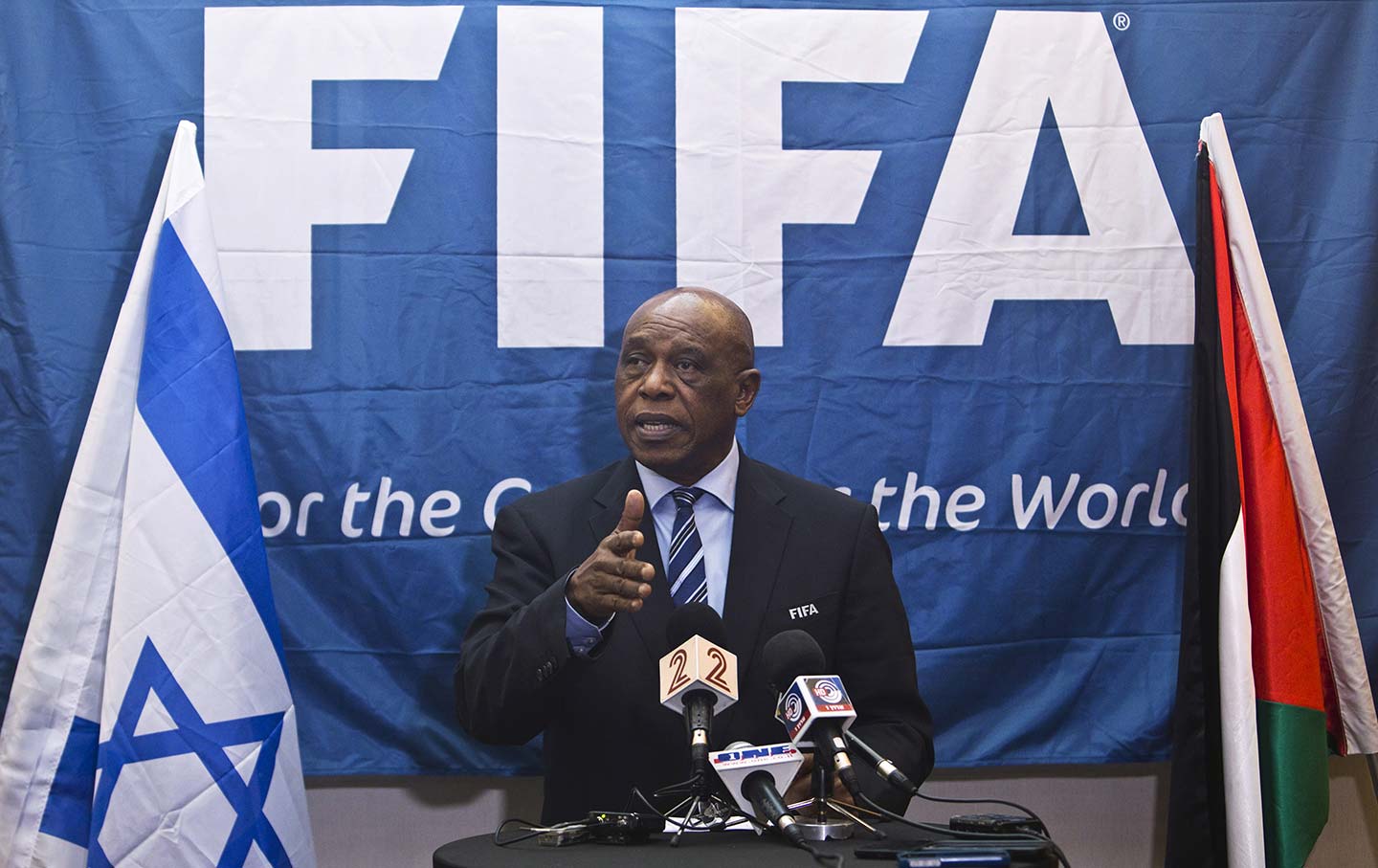 The situation for Palestinian and Arab soccer players in Israel, the West Bank, and Gaza has for some time been dire at best. On one side of the wall, segregated youth teams, racist abuse, and heckling—including charming chants such as “Death to the Arabs”—are working hazards of taking the field. On the other, checkpoint detention, imprisonment, and the bombing of soccer stadiums have become regular features of what is supposed to be the people’s game. Given the powerful role that soccer plays as a point of community cohesion in the West Bank and Gaza, this everyday violence has been interpreted as a full-frontal attack on civil society, normalcy, and hope.

Soccer in the region has been so troubled for so long that FIFA, the international body that oversees global soccer, has a specific committee to monitor Israel-Palestine issues. One of the problems in front of them is how to handle the fact that Israel’s national soccer league has six teams—Ma’aleh Adumim, Ariel, Kiryat Arba, Givat Ze’ev, Oranit, and settlements in the Jordan Valley—that are based in illegal, universally condemned settlements. The existence of these teams comprises a violation of international law. It also conflicts with FIFA’s own bylaws, which state that member organizations cannot compete within the national borders of another territory without permission. For Netanyahu, this issue is bigger than soccer, but symbolic of his expansionist ideology. He has been on a full-scale offensive to keep FIFA from casting out these teams. His government’s claim, disputed by international law, is that these settlements are actually on Israeli land, since they are in “Area C of the West Bank.” As Rory McCarthy wrote for The Guardian, “Area C [is] a designation from the era of the Oslo Accords which means Israel has full military and administrative control.… It covers 60 percent of the West Bank, home to around 70,000 Palestinians. It is also the area in which most Jewish settlements, all illegal under international law, are built.”

This week, a wide coalition of human-rights organizations has announced their opposition to FIFA’s decision to drag their feet on this issue indefinitely. The Palestinian Football Association, Human Rights Watch, the UN Special Adviser on Sport for Development and Peace Wilfried Lemke, and Palestinian solidarity organizations around the world have demanded that soccer teams based in illegal settlements be moved or disbanded. In addition, a petition has been presented, addressed to new FIFA president Gianni “Johnny Baby” Infantino and signed by almost 10,000 football fans, asking for resolution of this question.

Their impatience is warranted. Initially, the FIFA Monitoring Committee on Israel-Palestine was expected to deliver a report to the FIFA council by October 2016. But Infantino has quashed the report until it can be unveiled at the larger FIFA Congress in May 2017, where the vast landscape of competing interests and the outsized influence of countries like the United States will make passage of anything deemed controversial a near-impossibility.

In a press release, Sharaf Qutaifan of the Palestinian Campaign for the Academic and Cultural Boycott of Israel said, “FIFA and the committee have bowed to political pressure, refusing to take meaningful action to end the Israeli Football Association’s violation of FIFA statutes. FIFA is breaching its own duty of neutrality and is discriminating against Palestine. Infantino has abandoned his promise to make a clean break from the corruption of his predecessor Sepp Blatter and has instead followed in his footsteps.”

The decision to suppress the report in the name of “constructive engagement with Israel” feels particularly hollow given the decision by Infantino in 2014, when he was the powerful head of the Union of European Football Associations to ban clubs in the annexed Crimea region from competing in Russian tournaments.

Infantino was not open to “constructive engagement” with Russia, but seems to feel differently when it comes to Israel. It is an argument that rings particularly hollow to campaigners in South Africa, who are far too familiar with this kind of equivocation.

“South Africans know too well how ‘constructive engagement’ helped perpetuate apartheid and the suffering of black South Africans,” Kwara Kekana of BDS South Africa said. “Similarly, the false premise of the FIFA Monitoring Committee Israel-Palestine is that the parties can talk the issues out, but there is no middle ground when it comes to international law and FIFA’s own rules. FIFA must end this sham process of committees or face widespread protest and condemnation for its double standards.”

The answer to whether FIFA should recognize teams that operate in illegal settlements should be common sense. Instead, we get obfuscation and delays in a situation that should be—pardon the mixed sports metaphor—a slam dunk.