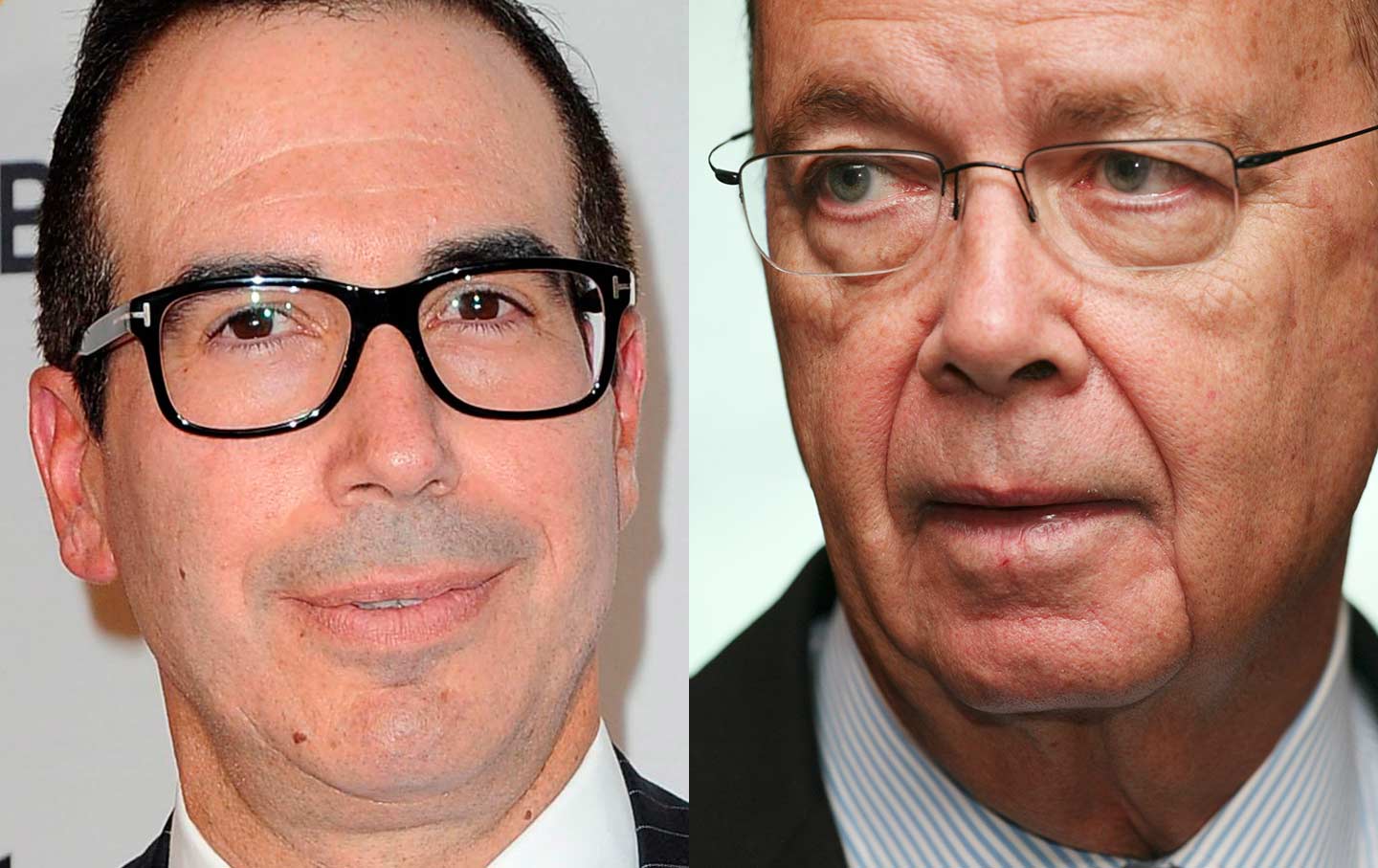 In my book Chain of Title, I refer to the collection of lenders, mortgage-servicing companies, third-party document processors, foreclosure-mill law firms, and trustee banks as all part of the Great Foreclosure Machine. I’m now realizing I should have trademarked the phrase, because Donald Trump just picked two engineers of that machine to serve in his cabinet.

Yes, I said two. Most in liberal circles and on Capitol Hill are buzzing about Steve Mnuchin, chosen as Treasury secretary. And that’s with good reason; he is in fact despicable, the “Forrest Gump of the financial crisis,” as Elizabeth Warren put it, ever-present for every assault on homeowners. People keep bringing up Mnuchin’s 17 years at Goldman Sachs, following in the footsteps of his dad, also a partner there. But that may be the least distressing part of his résumé, depending on what you thought of Suicide Squad.

I did a comprehensive profile of Mnuchin six months ago when Trump tapped him as national finance chair of his campaign. And the picture that emerges is that of a profiteer. In an unusual deal with the FDIC, Mnuchin led an investment team that bought the predatory lender IndyMac, saddled with tens of thousands of failing mortgages, for $1.65 billion. The FDIC had a standard deal for buyers of crisis-era banks; they would cover all losses above the first 20 percent on loan defaults. Mnuchin, who became CEO of the lender, treated this as a money-printing machine: his bank, renamed OneWest, could foreclose on homeowners, harvest fees for appraisals and inspections and late payments, and get protected by a federal backstop. The FDIC lost $13 billion on IndyMac; Mnuchin and company made $3 billion in profits, most of that coming directly from the FDIC in loss-sharing costs.

What that meant for homeowners was they were rubble to be plowed so Mnuchin could profit. Borrowers got few options to modify loans, as OneWest dashed to foreclosure. The bank pursued all of the tricks of the era—servicer-driven defaults (where servicing companies tell homeowners they must miss payments to get help, and when they do, they move to foreclose), dual tracking (when servicers negotiate modifications and pursue foreclosures at the same time), and more. Activists ended up on this guy’s lawn demanding that the foreclosures stop.

And there was a decided racial component. Sixty-eight percent of OneWest’s 36,000-plus foreclosures in California were in nonwhite areas. Just two weeks ago, fair-housing advocates accused OneWest of racial discrimination in lending and where it closed bank branches. OneWest also was a market leader in foreclosing on the elderly; its subsidiary Financial Freedom has carried out a disproportionate number of reverse mortgage foreclosures, which target seniors to suck out their home equity.

It’s not hyperbole to say that every one of these foreclosures were fraudulent. I find it amusing that media outlets like Bloomberg describe this claim as a “mortgage meltdown controversy” and not a fact. But we have the information. The infamous July 2009 deposition of OneWest Vice President Erica Johnson-Seck is still online—you can see for yourself. Johnson-Seck signed 750 mortgage documents a week in the name of at least seven different financial institutions. These were sworn affidavits, where Johnson-Seck claimed under penalty of perjury that she reviewed all the relevant information in a mortgage file, material facts that could lead to someone’s losing their home. She was asked how long she spent executing each document.

“I have changed my signature considerably!,” Johnson-Seck said. “It’s just an E now. So not more than 30 seconds.”

She also admitted to not reading the documents before signing them, which at 30 seconds a clip was understandable. She didn’t know how any of the records were generated or who computed them. She didn’t even sign in the presence of a notary, undermining the entire purpose of having a notarized document. And by the way, these fraudulent affidavits and other fake documents covered up the underlying crime; IndyMac didn’t properly receive promissory notes or mortgages and were foreclosing without standing.

This is fraud upon the court, done 750 times a week on eventually 36,000-plus loans. Mnuchin’s OneWest was completely not unique in this regard; millions of homeowners were thrown out of their homes based on false documents, a phenomenon that continues to this very day. And Mnuchin profited, eventually selling OneWest to CIT (a company he will regulate at Treasury; he currently still sits on the board) for double the investment.

I could go on with Mnuchin: the $3.2 million in fake Bernie Madoff profits he refused to return, the quiet withdrawal of $50 million at Relativity Media just before it filed bankruptcy. But he’ll soon have a partner in the cabinet with whom to go over all these schemes: Commerce Secretary nominee Wilbur Ross.

Ross is an old school Wall Streeter, someone tied up in their secret societies and rituals. He’s a private-equity baron who scoops up failing companies (much like Mnuchin did with IndyMac), squeezes every last nickel out of them by firing workers and shipping business lines offshore, and manages to profit in the exchange, usually by navigating the companies through bankruptcy. His firm was in charge of the Sago Mine in West Virginia when it blew up, killing 12 workers; the mine had a history of safety problems. He moved Cone Mills overseas, eliminating about 75 percent of its US jobs. He invested in the Greek banking system and encouraged the fire sale of the country’s assets.

But Ross is tied up in the Great Foreclosure Machine as well. One of the companies he pulled out of bankruptcy in August 2007 was American Home Mortgage Servicing Inc., or AHMSI. Ross bought out the servicing rights—the rights to manage day-to-day operations and determine whether to modify or foreclose mortgages—on about $132 billion in loans. They were the second-largest servicer of subprime loans in America.

Lynn Szymoniak, a whistle-blower who fought AHMSI in court and who won a $95 million case against several servicers on behalf of the federal government in 2012, explains that Ross’s company outsourced its mortgage-document operations. They used a company called DocX, which forged millions of mortgage assignments, claiming to be the officers of dozens of different banks. These documents were fraudulently signed after the fact to recreate a chain of title that lenders broke; they were a document clean-up shop. Lorraine Brown, the CEO of DocX, went to prison for five years for this activity, making her the only person to be jailed for foreclosure fraud.

After entrusting its mortgage operation to fraudsters, AHMSI eventually changed its name to Homeward Residential, and got bought out by Ocwen. Wilbur Ross stayed involved in Ocwen, serving on the board of directors. If anything, Ocwen was worse than AHMSI. It routinely broke the law, with “systematic misconduct at every stage of the mortgage process,” according to Consumer Financial Protection Bureau Director Richard Cordray. In 2013, CFPB fined Ocwen $2.1 billion for, among other things: charging borrowers unauthorized fees, failing to apply borrower payments to loans, failing to maintain accurate accounting statements, imposing insurance policies on borrowers who already had them, deceiving borrowers about loan modifications, and robo-signing foreclosure documents in fraud upon state courts.

One of my favorite Ocwen stories is the backdating scandal. Under the law, servicers must inform borrowers of why they were denied a loan modification and give them 30 days to appeal. Ocwen sent thousands of these letters backdated 30 days from the sending, giving borrowers no time to act.

Ross eventually stepped down from the Ocwen board, and miraculously was able to sell $72 million in stock right before it dropped 20 percent in price.

Ross and Mnuchin were profiteers in a crisis that bore nearly all its misery on the backs of working people who suffered from the misfortune of acquiring a bad loan at the wrong time. But there’s a supreme irony here: The foreclosure crisis that these two moguls (and Trump himself) used as a moneymaking scheme may have handed Trump the election.

The Center for American Progress just released a study looking at the role of Midwestern housing instability in the 2016 election. They found that, between 2012 and 2016, negative equity rates—where a homeowner owes more on their house than it’s actually worth—got worse in counties in the Midwest that shifted from blue to red. The Democratic vote was similarly lower in urban counties where housing conditions eroded.

In other words, Barack Obama’s handling of the mortgage crisis, by protecting bank balance sheets instead of homeowner balance sheets, may have cost Hillary Clinton the election. This was the biggest mistake of the Obama presidency, instituting a foreclosure-mitigation program that servicers used as a predatory-lending scheme, and then failing to take advantage of the extreme legal exposure of the industry after the revelations of foreclosure fraud. And in a sad twist, the very people who will benefit from that failure, and Trump’s election, are the ones who profited from foreclosures the entire time.