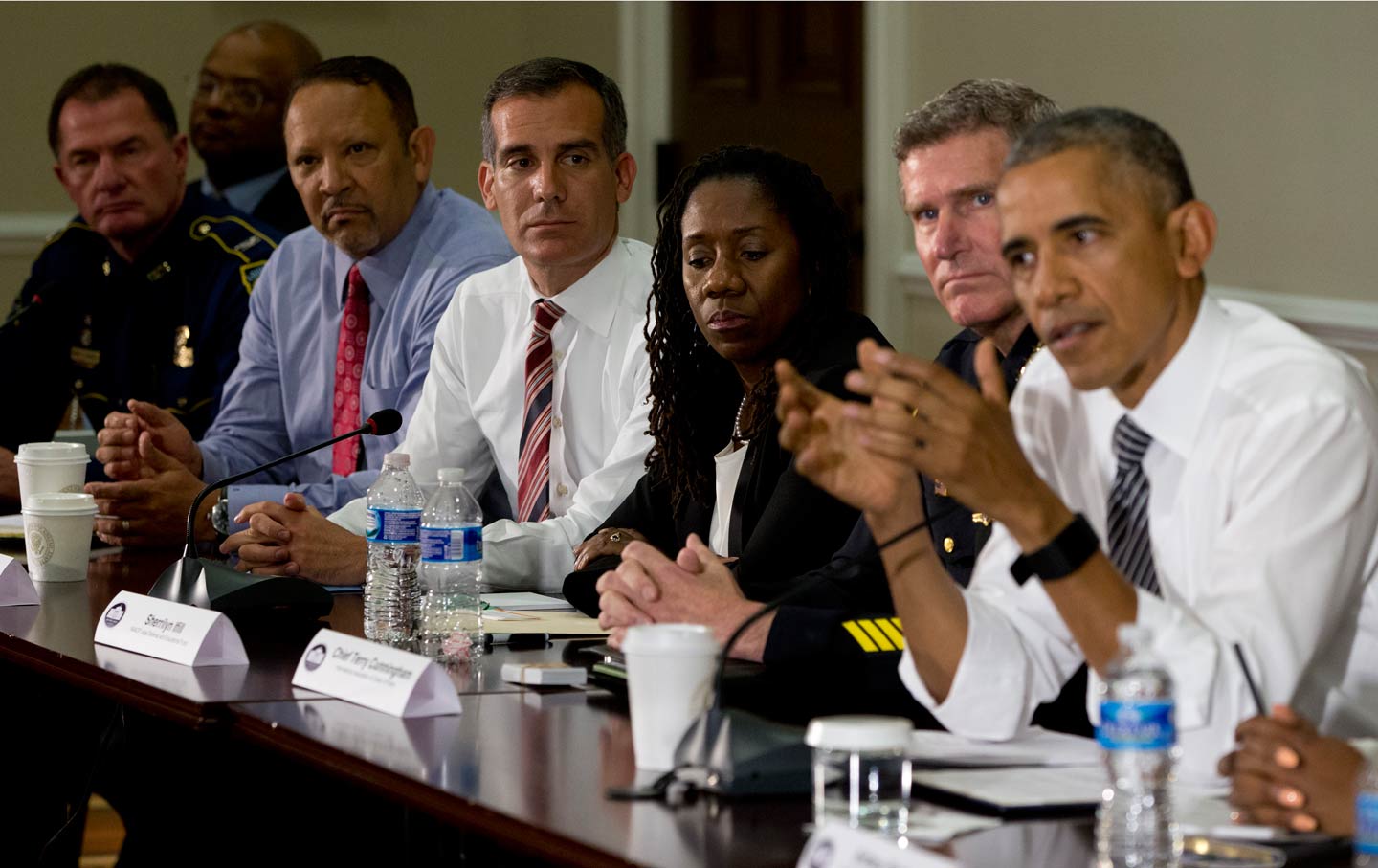 President Obama, right, as he speaks to media at the White House Wednesday, July 13, 2016, about community policing and criminal justice, with activists and civil-rights, religious, law-enforcement, and political leaders in attendance. (AP Photo / Carolyn Kaster)

In her moving speech at the Democratic National Convention, first lady Michelle Obama said that “in this election, we cannot afford to be tired, or frustrated, or cynical.” While I certainly agree that we need to do everything in our power to ensure that Hillary Clinton becomes president, it is hard not to feel tired, frustrated, and cynical sometimes when I consider my experience with racial discourse in America.

I’m an African-American student at Williams College and, like many other students of color my age, I care deeply about fighting racism and improving race relations in America. On a college campus, we should be asking tough questions that challenge our understandings of the world, engaging in lively debate, and learning from each others’ experiences. Yet I have observed that when the issue of race is raised, many of my white peers and professors often unwittingly and even actively resist putting racism at the center of political conversations.

While I’ve been able to have fruitful conversations about race with some of my white peers and professors, many either briefly acknowledge that racism exists and then change the subject or feign sympathy over a recent police killing before moving on to more pressing concerns. There have even been several occasions where I have been in the middle of an edifying conversation with a white peer or professor in which they end the conversation rather abruptly when I bring up issues of institutional racism, African-American oppression, or America’s legacy of white supremacy.

Earlier this year, I was having a conversation with several white peers in the dining hall. We were discussing the presidential election. Several of us lamented the Trump candidacy and most at the table agreed that Trump would make a terrible president. But when I argued that it was a shame that Bernie Sanders was the only candidate who had made a substantive effort to address racial inequality in his political platform, every white student at the table remained quiet, as if I’d brought up a taboo subject. I pressed the point by asking everyone why issues of race often don’t receive as much attention as they should in presidential debates, and everyone at the table looked uncomfortable, even annoyed. One student then dismissively said, “Yeah, I don’t know. There’s a lot of important issues to discuss, so I guess they don’t get around to it. Do you have a final tomorrow? I’ve got to study for Chem. I’ll catch you guys later.”

Unfortunately, that isn’t the first or last time I’ve inadvertently ended a conversation by bringing up the issue of race.

I’ve had many similar experiences outside of Williams. One time, I was talking with a professor at a conference I attended this summer in New York. Our conversation began with the book I was reading, The Daemon Knows, by Harold Bloom. When the professor saw me reading the book, he turned and said, “Great book.” I replied, “I agree. Have you read any of Bloom’s other works? How do you think it compares?” From there, we ended up delving into a great conversation about Bloom’s assessment of the Western canon. Midway through our conversation, I remarked that my main problem with Bloom is that he hardly acknowledges the work of black writers. I further explained that I find it problematic that aside from Zora Neale Hurston and Ralph Ellison, Bloom suggests that there are hardly any great African-American authors who are worth reading, let alone deserving of being included in the canon. The professor gave a slow nod and then, after a brief pause, said “Hmm. Well, it was good meeting you, I’ve got to run.”

Less than a minute later I saw him sitting on a bench around the corner. He sat there waiting alone for the next 10 minutes or so until the event began.

As a progressive college student who cares deeply about racial injustice and values intellectual debate, I’m eager to discuss how we as a society can prevent the next Alton Sterling. I’m interested in understanding how other people, both black and white, understand police brutality and Black Lives Matter. I do not expect every person I engage with to agree with me. And I don’t expect every person I engage with to be as interested in discussing these issues as I am. But I find it frustrating and dispiriting that more often then not race is not a topic that many of my white peers and professors, particularly those who clearly demonstrate a keen interest in political issues, feel comfortable discussing in any serious way.

As a minority on a predominantly white college campus, I deal with this refusal to talk about race on a regular basis. And it can be hard to imagine working cohesively with people of different races to improve race relations and achieve even incremental social change when that refusal arises after tragedies like the death of Philando Castile, and when the grievances of minorities are trivialized or dismissed by white people who don’t understand what it is like to face the obstacles that many minorities from disadvantaged backgrounds have to overcome to get to a place like Williams. This refusal passively reinforces the racism and bigotry that paralyze racial progress in our society.

I understand that discussing racism might not always be comfortable or easy, but race is an explosive issue that touches all spheres of American life. When white people avoid candid and unsettling discussions of the issue, they are inadvertently undermining the efforts of many who are trying to make our world a better place. If we want to make college campuses and society more inclusive, more white people need to engage with the black side of things. For white Americans who genuinely want to be a part of the solution and not the problem, listening actively to the lived experiences of minorities is a good place to start.