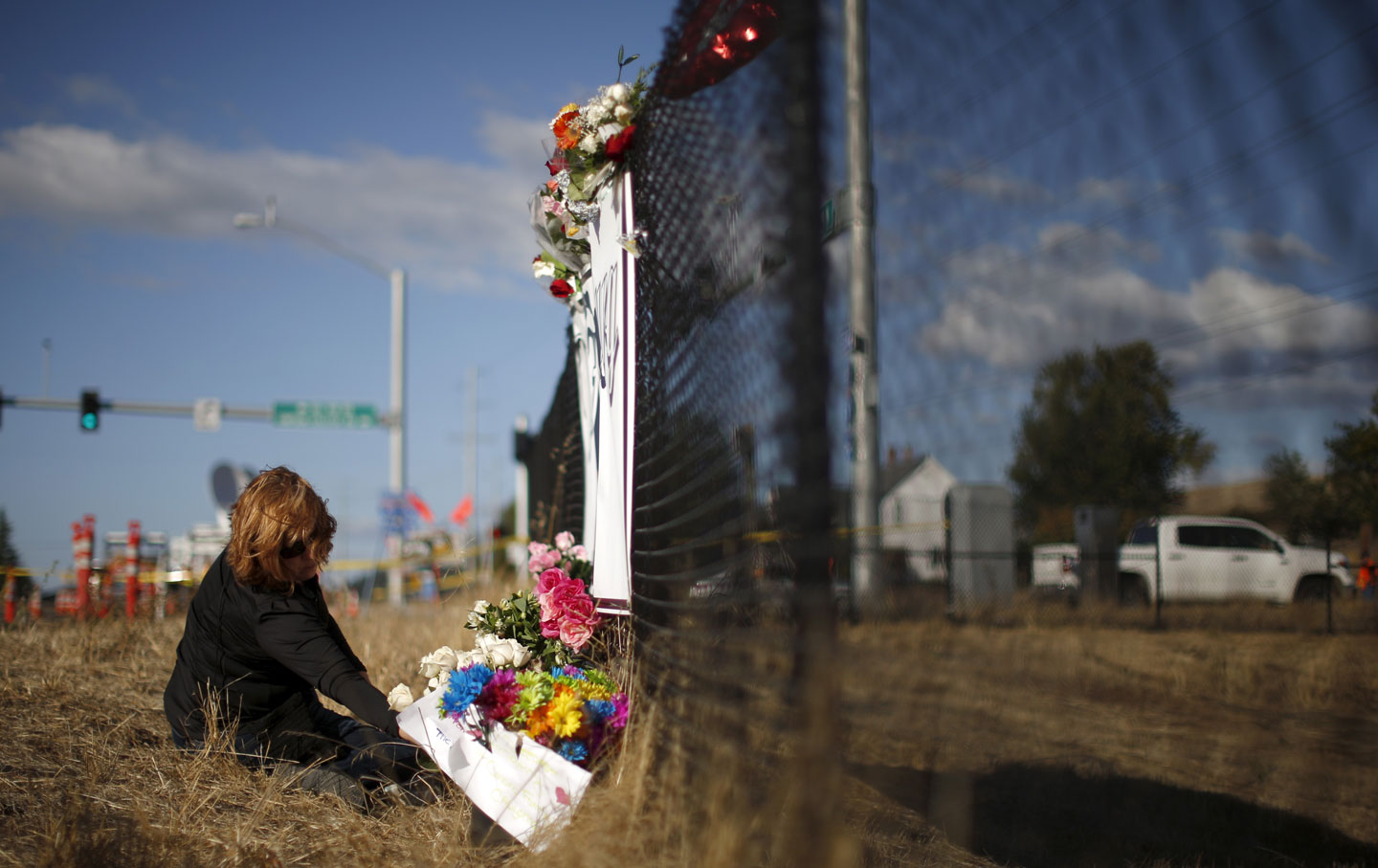 In recent months, another wave of gun violence has swept across the United States. On October 1, in Roseburg, Oregon, a man with a history of mental illness and a small arsenal, legally acquired, opened fire at Umpqua Community College, killing nine people. In June, Dylann Roof laid siege to a black church in Charleston, South Carolina, in the hopes of igniting a race war. He shouldn’t have owned the weapons he used to kill nine parishioners, but a loophole in the federal background-check system allowed him to make the purchase. This was followed in late July by another spree shooting, this time inside a movie theater in Louisiana. In August, a disgruntled former employee of a Virginia television station murdered a reporter and a cameraman live on the air. As cable-news stations kept replaying the killings, the gunman posted on social media a soon-to-be-viral video of the murders, which he recorded with a cell phone held behind a Glock 19. All of this occurred on top of the grinding violence in America’s inner cities, where the true cost of gun deaths are borne—primarily by black men, who are 15 times more likely to die from gun violence than white men.

Politicians cannot avoid this scourge. This is true in a literal sense: One of the Roseburg victims was a relative of Oregon Senator Jeff Merkley, while a staffer for New York Governor Andrew Cuomo was killed in Brooklyn by a stray bullet in September. Gun violence has also spiked in Washington, DC, mainly in the poor neighborhoods ringing the city, where the murder rate surpassed that of 2014 by early September.

But it’s also true in a much more fundamental sense: There is a public-safety crisis that the political class has both the ability and the obligation to address. Studies have shown a direct correlation between tighter gun-control measures and fewer gun deaths, as President Obama noted in his frustration-laced speech following the Roseburg shooting. “When roads are unsafe, we fix them to reduce auto fatalities. We have seat-belt laws because we know it saves lives. So the notion that gun violence is somehow different…doesn’t make sense,” Obama said.

To that end, Democratic candidate Hillary Clinton later unveiled some good proposals that can help the problem: mandating universal background checks, allowing gun manufacturers to be sued for selling dangerous products, and closing the background-check loophole. In a rational political system, those measures would pass—and would have done so long ago. A broad bipartisan majority of Americans, including gun owners, support them. And yet, every political observer knows that tougher gun-control laws will not be enacted anytime soon.

That’s because our failure to properly address gun deaths is a symptom of a larger democratic crisis. The reason that the United States can’t confront the clear and existential threat of climate change, or expand a safety net that is demonstrably shortchanging poor Americans, is the same reason that this country can’t solve its gun problem: a rigged political infrastructure that gives outsized power to wealthy corporate interests and the extremists who pander to them. A strong background-check bill actually received a majority of votes in the Senate following the Sandy Hook shootings in Newtown, Connecticut, but it failed to advance because of arcane filibuster rules. It probably would have died anyhow in a hopelessly gerrymandered House, where a small number of conservative radicals—many of them heavily backed by gun manufacturers and the NRA—hold a wildly disproportionate sway.

It’s possible that our glaring gun-violence problem will someday be addressed. There are certainly some promising changes happening at the local level. But the question remains: How many thousands of Americans will have to die first—and why must we remain so pathetically ill equipped to deal with even the most basic and solvable problems facing the American people?