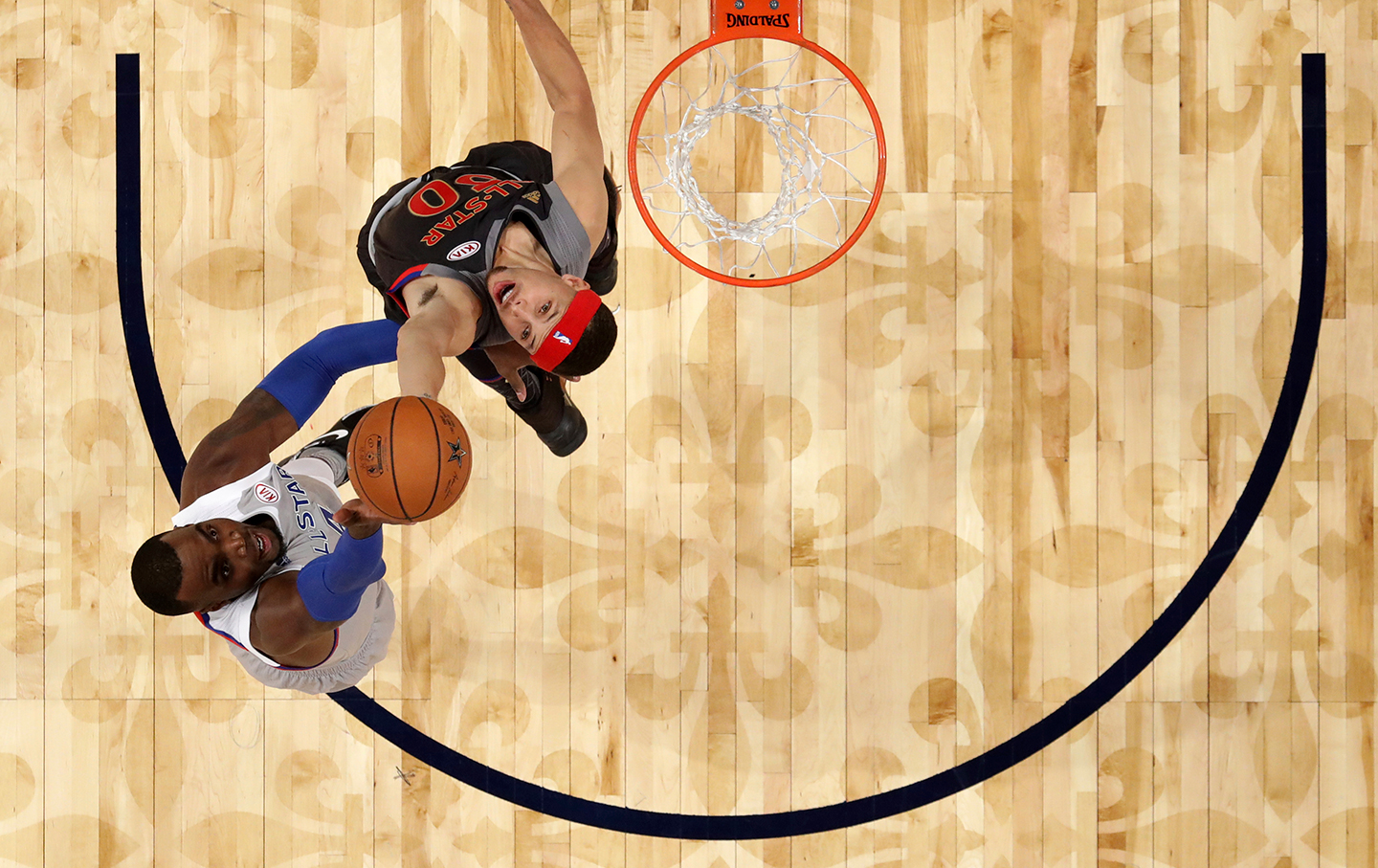 “Now we’re judging people by their religion—trying to keep Muslims out. We’re getting back to the days of putting the Japanese in relocation camps, of Hitler registering the Jews. That’s where we’re heading.”
—Detroit Piston Head Coach Stan Van Gundy

“I agree with that description [that Trump is an ‘real asset’ to the United States] if you remove the ‘et’ from asset.”
—Steph Curry, two-time MVP

Throughout the NBA, respected coaches and the most decorated players—from Gregg Popovich and Steve Kerr to LeBron James and Steph Curry—are speaking out against the new president. This is happening throughout much of the sports world—even in NASCAR—but most notably in the NBA. Over the All-Star weekend in New Orleans, the question was raised: Why is this happening in the NBA—and why now?

I have asked coaches, players, and beat writers this very question. The consensus is that the NBA revolt against the Trump administration is the result of a perfect storm; the influence of the Black Lives Matter movement, greater comfort with social media, and the multicultural and global nature of the game have all inspired this majority-black sports league to stand up to the white nationalism of Muslim bans and border walls.

Many journalists and players also believe that the particular outspokenness of  LeBron James and Gregg Popovich has provided political cover for anyone wants to follow suit. Others point out that being anti-Trump, is good for business. Nike is commodifying dissent with a beautifully filmed—if crassly opportunistic—commercial starring LeBron himself. (Hopefully this ad will age better than the company’s 1980s Rebel with a Cause campaign, starring John McEnroe.)

All of these theories have merit, but they don’t explain everything. The NBA was largely silent during the Bush years, except for the continual antiwar voice of 10-year veteran Etan Thomas and a T-shirt worn by Steve Nash. Players like Craig Hodges and Mahmoud Abdul-Rauf were driven from the league in the 1990s in part for their political outspokenness. Yet now Hodges is interviewed about his “courage” on Dr. King’s birthday for Inside the NBA and Rauf is the subject of a beautiful Outside the Lines special on ESPN, celebrating his “revival.”

Something else is going on, and it’s an unintended consequence of Commissioner Adam Silver’s efforts to keep the anthem protests that sprang up in the NFL from spreading to the NBA.

Before the season began, the league sponsored public-service announcements about “togetherness” featuring star players known for being vocal about police brutality: Carmelo Anthony, Chris Paul, and Dwyane Wade, along with white player Kyle Korver. Silver and NBPA President Michelle Roberts also sent each team a memo affirming the rights of players to speak out off the court, and asking NBA players to contact the league or the union if they are looking for ways to make “positive change.” The approach could not have been more different from the hyper-paternalism of Silver’s predecessor, “Mr. Dress Code” David Stern. Silver’s message was that players could be as woke as they want to be…as long as it would be kept off the court, and as long as it tilted toward service, not resistance.

It has to be noted that this corporate strategy worked only because Adam Silver by all accounts sincerely cares about there being vocal, civic-minded athletes in a way that Stern instinctively opposed. The very reason the All-Star game was in New Orleans was, of course, because it was pulled from Charlotte, North Carolina, over the state’s discriminatory legislation against LGBTQ people. Players took the cue from Silver, holding hands during the anthem to symbolize “unity,” and then saw footage of those very gestures used in the NBA’s very own PSAs.

But then a not-so-funny thing happened on the way to kumbaya. Donald Trump was elected president, and rebellion has been normalized. Americans have been protesting since the inauguration, and a heterogeneous “resistance” against the grifter in the White House has taken hold. With his every tweet, Trump sends more people—even those who never thought about politics—into the streets.

Players and coaches are part of this world, too. Many are just as shocked and enraged as the rest of us who believe this presidency is off the rails. They have chosen to use their platform and take advantage of the oxygen that Silver offered in return for not going “full Kaepernick” during the anthem. They are standing up and not stopping, even if it has gone beyond what Adam Silver could ever control. These are what are called “unintended consequences.”

Adam Silver wanted a “woke league.” Well, he got it and, in the short term, no one is going back to sleep.