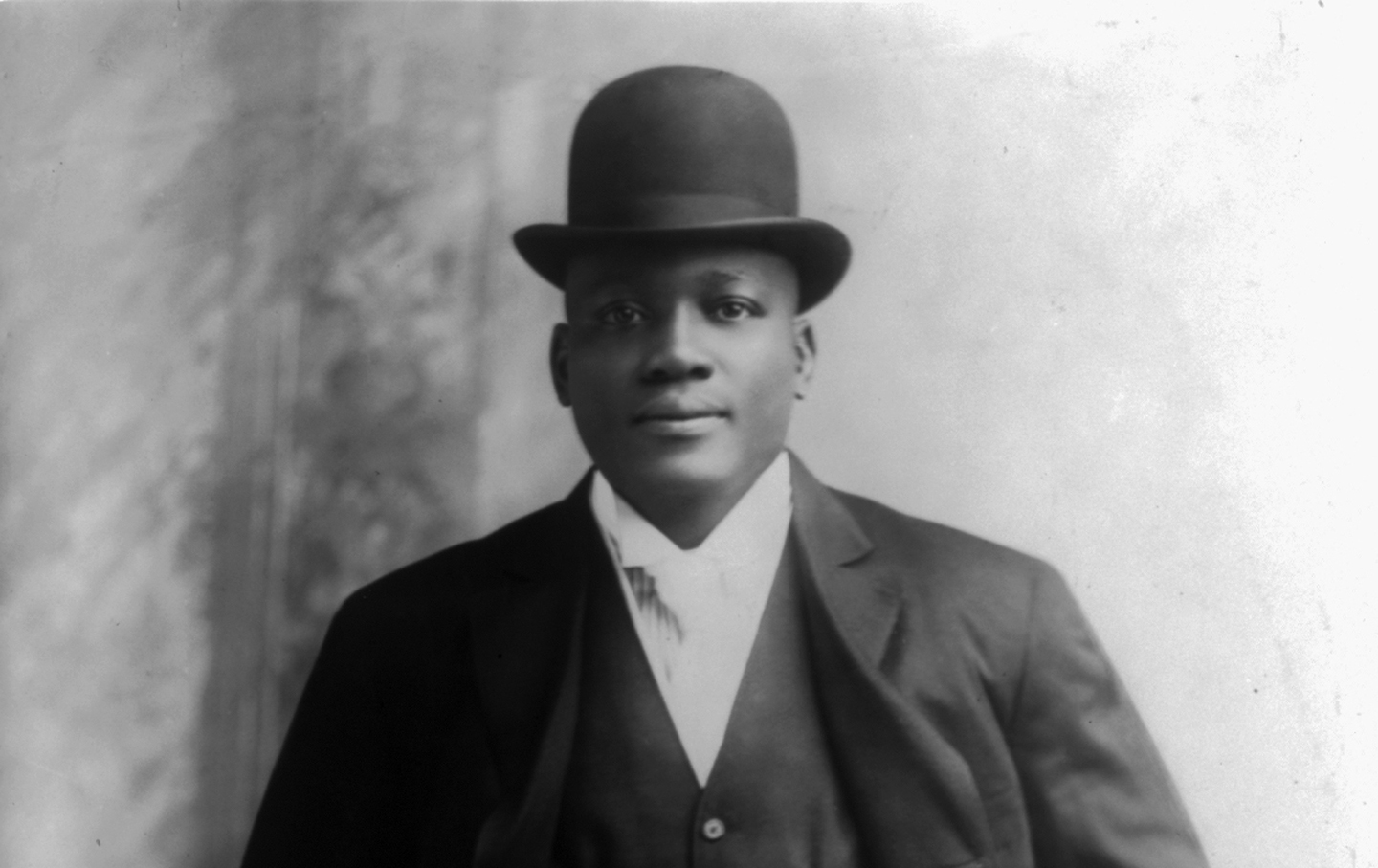 Jack Johnson in 1909. (Otto Sarony via Library of Congress)

There is a push underway—long championed by Republican Senator John McCain and Representative Peter King—to secure a pardon for the legendary boxer Jack Johnson, the first black heavyweight champion of the 20th century. In 1913, Johnson was convicted by an all-white jury on “Mann Act” charges—otherwise known as “white slavery”—for transporting a white sex worker named Lucille Cameron across state lines “for immoral purposes.” Even though Johnson married Cameron several months later, the state still pushed the case until Johnson was found guilty. It was a racist conviction aimed at bringing low a fighter who was never afraid to wear expensive clothes, consort with white women, and tell mainstream America that they could kiss his ass. He was also perhaps the most powerful symbol of resistance to white supremacy since Nat Turner, inspiring spirituals and songs of protest from the fields of sharecroppers to the hard labor of chain gangs.

Johnson received the maximum sentence of a year and a day in federal prison, but instead of accepting the verdict, he lived in exile for seven years. Then he eventually returned and served his sentence in Leavenworth Prison. McCain was asked by The Undefeated’s Jesse Washington whether he believed President Obama would deny the pardon. He said, “I hope not, but I’m afraid so. I’m very confused by it. I have not understood, where this is an egregious act of racism, that the president of the United States wouldn’t want to correct history.”

But the question is not whether the US government will “right this wrong” but whether Jack Johnson’s family should even allow the United States to sit in judgment of this towering figure. Johnson lived a rebel’s life, and his persecution by this government is precisely part of what makes him such a powerful symbol of resistance to this day. He was both brash and uncompromising in an era when public lynchings against black men took place on weekly basis. Johnson was not an explicitly political figure like Muhammad Ali, making speeches against the Philippine–American war. But as a walking, self-conscious political symbol, he explored new boundaries. Johnson was flagrantly flamboyant, described as a “dandy” by a white press shocked by a famous boxer who wanted to look good, dress fine, and not give a damn who was scandalized. From the American Legion to Booker T. Washington, they threw their punches and Johnson slipped every one like a weak left jab.

Jack Johnson’s open mockery of the ceremonies of white supremacy made him more than a boxer. It made him the lightning rod of white rage and exemplar of Black Pride. This swelled to an apex on July 4 1910, when Johnson famously destroyed the “Great White Hope” Jim Jeffries in a much-anticipated fight. Afterwards the New York World wrote, “That Mr. Johnson should so lightly and carelessly punch the head of Mr. Jeffries must come as a shock to every devoted believer in the supremacy of the Anglo-Saxon race.”

The shock turned deadly after Jeffries was finally counted out. Violent race riots erupted around the country, in which white mobs attempted to enter black urban neighborhoods, and were repelled. After the smoke cleared, dozens of African Americans were dead in the most widespread urban cataclysm that the United States would see until the aftermath of Dr. King’s assassination in 1968. The US government did not take this moment to decry racist violence, but instead turned its ire on boxing, voting to restrict films of fights and even debating the banning of boxing altogether. They also set about the relentless persecution of Jack Johnson. This led W.E.B. Du Bois to issue these immortal words about Johnson in 1914: “Why then this thrill of national disgust? It comes down, then, after all to this unforgivable blackness.”

As if it wasn’t obvious enough—with Senator McCain, lugging his anti-immigrant, anti-Asian racist baggage, as well as Representative Peter King, the supreme anti-Islamic bigot in Congress, leading this charge—the push to pardon Jack Johnson is more about how this country wants to regard itself today than any sense of righting past wrongs. It is a bellow of the hollow conceit that racism is a disease existing primarily in the past and treats a pardon for Jack Johnson as part of the “healing process” so we can move on to our post-racial future and “a more perfect union.” Pardoning Johnson in this political climate would be an act of vanity, not justice, using his story to sell a lie about the present. We are a country that just used the political tool of 18th and 19th century slaveholders—the Electoral College—to elect a white-supremacy sympathizer even though he received 3 million fewer votes than his opponent. This is a sick system, and it lacks the moral authority to pardon Jack Johnson for any reason other than its own public relations. It’s not for us to forgive Jack Johnson. The opposite is the case. If he were still alive, the Galveston Giant would look John McCain and Peter King square into their mottled, hypocritical faces and say, “Pardon this.”