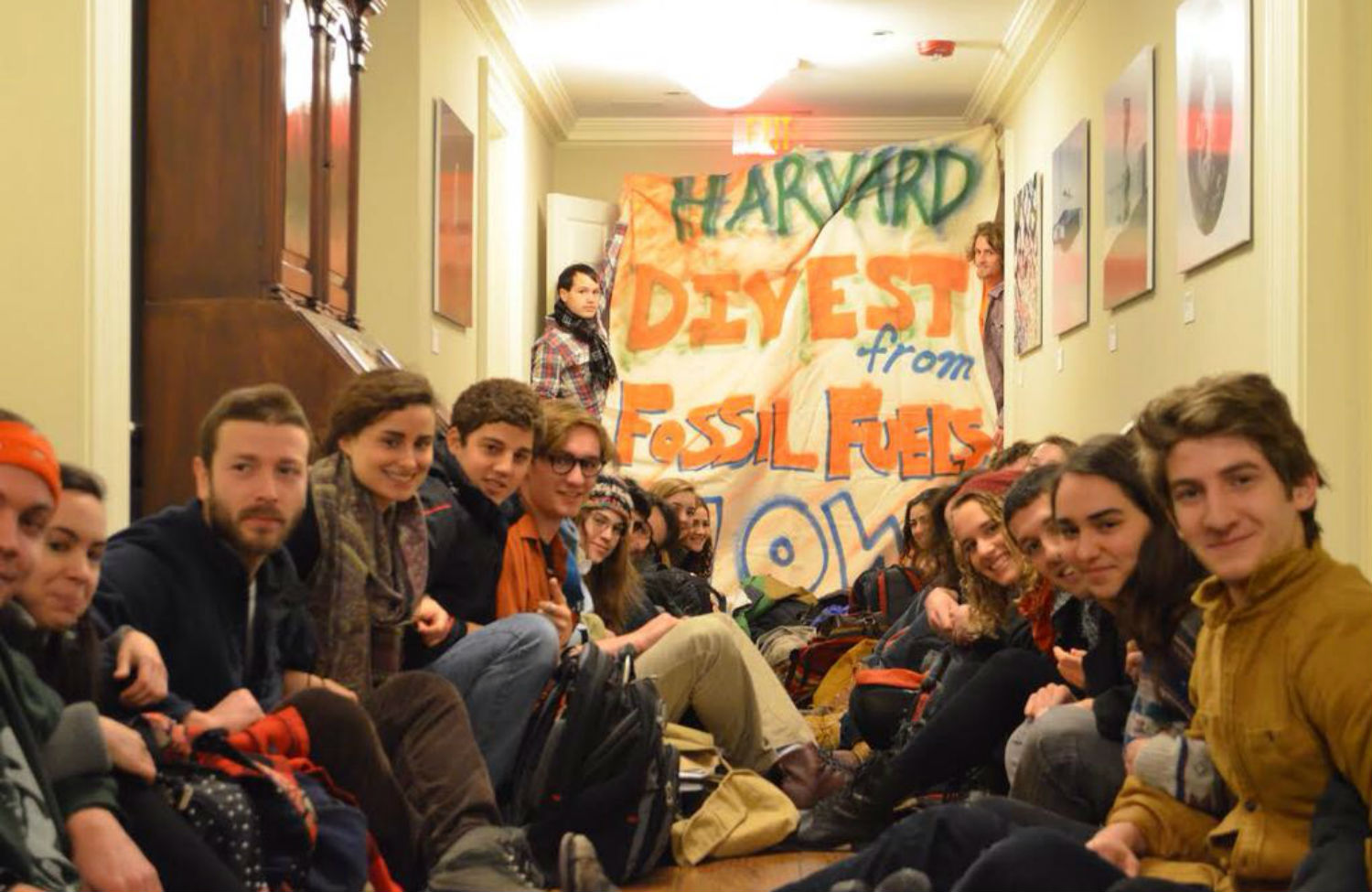 Today, more than thirty-five Harvard students launched a sit-in at Massachusetts Hall, outside President Drew Faust’s office, to demand full divestment from the fossil-fuel industry. We sit in because Harvard has a responsibility to do everything in its power to address the climate crisis.

The scientific debate about climate change is over. Global warming threatens livelihoods and cultures in communities around the world with natural disasters, drought, floods, disease and conflict. Yet Harvard knowingly and willingly profits from the fossil-fuel companies that exacerbate this crisis, even as the true costs of oil, coal and gas use are borne by our communities. Overwhelmingly, these costs are shouldered by already marginalized communities, making this not only a climate issue but a justice issue.

As we sit in, we call on Harvard to answer these questions. Will Harvard continue to profit from corporations whose extraction methods exacerbate inequality in already marginalized communities? Will this university disregard the effect of exploitative business practices and choose to prioritize corporate profit over communities on the frontlines of climate disasters whose lives and cultures are under siege? Will it choose to ignore commitments to current and future generations, including Harvard’s own students, who are currently being robbed of a livable future?

Divest Harvard calls for divestment from the top 200 fossil fuel companies as the first step. Harvard’s divestment would align its financial choices with its purported values. It would also send a powerful message that our society can no longer tolerate the business model and political power of the fossil-fuel industry. Harvard is already a global leader in research and education. Alumni, faculty and administrators enjoy tremendous influence over our economic affairs and political culture. And the university has taken steps to address its own carbon impact through admirable sustainability initiatives. Yet Harvard’s wealth and influence means it has a special responsibility to act in every capacity possible in the face of a crisis this immense. Despite a compelling historical precedent of divestment from tobacco and South African apartheid, Harvard has ignored the facts of the current crisis. Refusing to divest now is an irresponsible and unsustainable abrogation of Harvard’s power.

Divest Harvard began on this campus close to three years ago. In an Undergraduate Council referendum in 2012, 72 percent of participating Harvard College students supported divestment from fossil fuels. Since then, in addition to growing student support, over 200 faculty members, almost 1,100 alumni and around 65,000 community members co-signed our campaign. Backed by this powerful movement, we asked the university to meet with us to discuss divestment. The university ignored our requests and even arrested a student in the spring of last year for protesting the lack of transparent dialogue.

Now, Divest Harvard will accept nothing short of full divestment. After three years of conversations that led nowhere, merely requesting further discussion is both insufficient and disrespectful to the communities who bear the direct consequences of the fossil-fuel industry’s actions. Harvard’s actions must reflect the urgency of the global need for action.

Today we are sitting in the office of Harvard’s president, to call on her and her fellow decision-makers in the Harvard Corporation to make the ethical, sensible, and necessary decision to divest from fossil fuels. This movement is here to stay. Divest Harvard therefore commits to continue mobilizing, and to come back in the spring—more powerfully and with higher numbers than ever before.