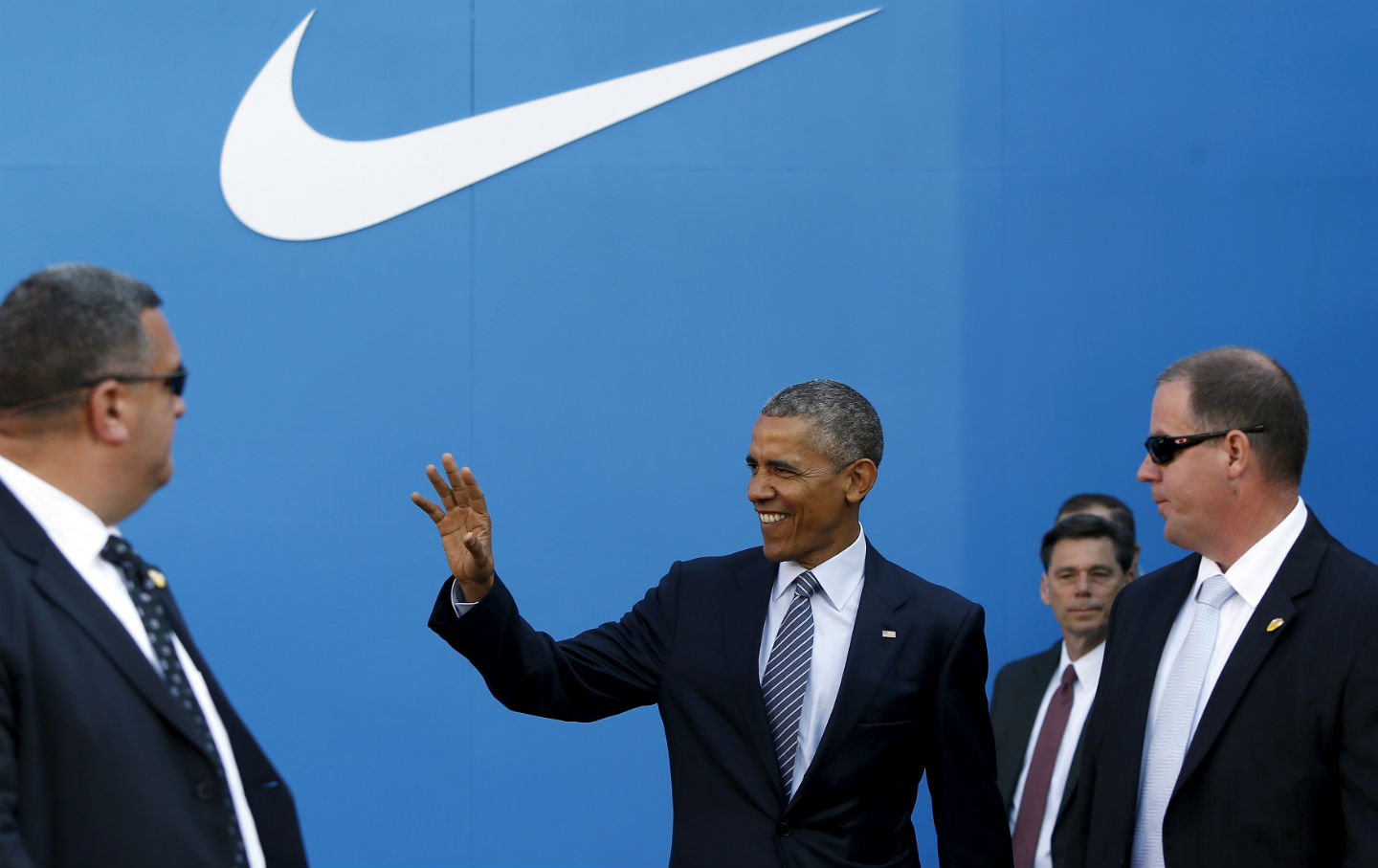 President Obama waves as he arrives to deliver remarks on trade at Nike's corporate headquarters in Beaverton, Oregon. (Reuters/Jonathan Ernst)

Two big issues helped Barack Obama secure the Democratic nomination, and with it the presidency, in 2008. The first was the Iraq War, which Obama had opposed when his chief rival, Senator Hillary Clinton, was voting to authorize George W. Bush’s use of military force. The second was trade policy, which Obama said had gone horribly awry with Bill Clinton’s advocacy of the corporate-friendly North American Free Trade Agreement. Although the mainstream media rarely covers trade debates with the seriousness they warrant, Obama understood that this was a critical issue in primary states like Wisconsin and Ohio. He ripped Hillary Clinton for once “talking about how great [NAFTA] was and how many benefits it would bring” and decried “a Washington where decades of trade deals…have been signed with plenty of protections for corporations and their profits, but none for our environment or our workers, who have seen factories shut their doors and millions of jobs disappear.”

Obama is still ripping his Democratic colleagues for their stance on trade—but now he’s criticizing them for sounding too much like candidate Obama in 2008. As he makes his pitch for “fast-track” authority to close the Trans-Pacific Partnership (TPP) agreement, the president gripes about how his “fellow travelers on minimum wage and on job training and on clean energy and on every progressive issue” are “whupping on me” on trade policy.

Obama claims that the congressional Democrats siding with organized labor, family farmers, and environmental groups are “just wrong” and “making this stuff up” when they warn that the TPP is likely to depress wages, further expand income inequality, and do more to employ international trade lawyers than US workers. He objects especially to Senator Elizabeth Warren’s description of how a provision for settling disputes between investors and national governments could undermine US regulations, including the Dodd-Frank reforms to tame big banks and Wall Street. In fact, Warren’s concerns mirror those of experts like Lori Wallach of Public Citizen’s Global Trade Watch, who has highlighted the threat posed by trade deals that establish “foreign tribunals where investors can ‘sue’ governments for policies they claim undermine their expectations and demand taxpayer compensation for lost expected future profits.” And Warren isn’t backing down; she’s hitting Obama where it hurts, with a call for him to reveal all of the details of the proposed deal before Congress grants a fast-track authority that would preclude amendments and severely limit debate on any final agreement. “If the president is so confident it’s a good deal,” Warren said, “he should declassify the text and let people see it before asking Congress to tie its hands on fixing it.”

The Senate voted to grant Obama—and the next president—fast-track authority after majority leader Mitch McConnell rallied the GOP and a minority of Democrats to back it. In the House, though, Democrats are overwhelmingly opposed, and the contingent of skeptical Republicans is larger. And even if he gets fast-track, Obama’s work is not done, as the final TPP deal will require both House and Senate approval.

Obama’s dismissal of his fellow Democrats’ concerns on trade harms his own credibility in two ways. First, he’s unwilling to declassify the text of an agreement that was negotiated behind closed doors with input from corporations that enthusiastically encouraged its adoption. Second, even for Democrats who are inclined to give this president some leeway, the suggestion that the trade deal’s opponents are “making stuff up” denies the experience and insight of progressive critics of free-trade absolutism. The largest and steadiest public-education project on a major economic issue in recent memory has played out over the past quarter-century in union halls, church basements, and community centers across the country, as Americans have wrestled with the promises and realities of trade policy. It’s why Obama had to address the issue as part of his 2008 campaign. And it’s why the vast majority of House Democrats will not be moved: They know their constituents don’t want fast-track or the TPP.

THE NATION  IS READER FUNDED.

YOUR SUPPORT IS VITAL TO OUR WORK.

Senator Bernie Sanders—who announced his bid for the presidency on May 26—summed up that experience as he explained his fierce opposition to yet more secretive trade deals. “These folks have been proven wrong time after time after time,” Sanders said, noting that trade deals were supposed to be job creators and instead have been a major factor in the closing of some 60,000 American factories since 2000. Now, Sanders added, “the administration says, ‘Trust us. Forget about those other trade agreements; the TPP is special. This time, it will be different. This one really will create jobs’—despite the fact that every major organization representing the working people of this country says the exact opposite.”

Obama should ask himself why so many of his longtime supporters fundamentally disagree with him on this issue. Instead of suggesting that they’re “just wrong,” he should listen to people like Keith Ellison, the Congressional Progressive Caucus’s cochair and one of Obama’s first supporters in Congress in 2007, who has declared: “We cannot afford to rush through another NAFTA that values corporate profits above families.