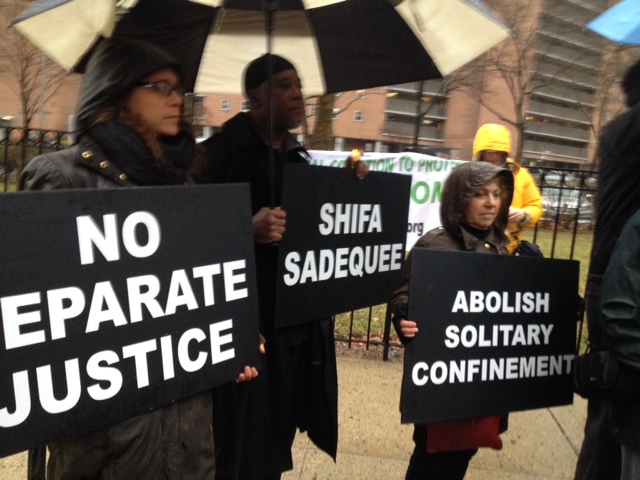 On a miserable Monday evening in early April, when most people were scuttling for the nearest subway, a motley group was huddled before an unremarkable grey building in lower Manhattan, declaiming into the rain.

The woman was Cara Page, executive director of the Audre Lorde Project and a prominent black queer activist; “Shifa” was Ehsanul “Shifa” Sadequee, a young man convicted of terrorism-related charges five years ago. The two had little obvious in common, but Page had been in Atlanta at the time of his trial and a member of the Free Shifa campaign, a coalition of supporters who argued that his prosecution and detention were unjust. It was proof, they said, that the inhumane detention of “War on Terror” suspects has occurred on American soil, too. Years later, most of the world had moved on from Sadequee’s story, but Page, like the others bundled around her, had not.

“We’re gonna build a nation/ that don’t torture no one/ but it’s gonna take courage/ for that change to come,” chanted Luke Nephew, a Bronx-based spoken word poet who had trekked to lower Manhattan for the vigil. After singing a few rounds the rest of the crowd joined in. Friends and strangers locked eyes and nodded—a small moment of peaceful resistance in the face of an uphill struggle.

Such was the third monthly gathering of No Separate Justice, a campaign to highlight the systemic inequities embedded in America’s domestic criminal justice system—the same system which is so often held up as a righteous alternative to Guantánamo. On this Monday, they had come to highlight Sadequee’s story. The weather had whittled their ranks—there were only twenty or so—but what they lacked in size they made up for in determination.

Among the crowd were participants who had come from as far as Iowa; Washington, DC; and Philadelphia. They were Muslim community leaders, professors, students, journalists and activists from deep in the trenches of the animal rights, LGBTQ and prison rights movements. One of Sadequee’s relatives was also there. For some, this was the first time they had trekked to the Metropolitan Correctional Center, where men like Sadequee have been known to molder for years in pre-trial solitary confinement. Others had been attending since the first vigil in February, determined to bear witness to the lopsided system of justice that has sprouted inside MCC and many other prisons across America.

“They can’t hide you/ we still see you/ you are family and we need you,” Nephew sang, as the crowd stared at the wall of MCC.

Sadequee’s story falls into the jagged space occupied by so many of the terrorism suspects who have wound up behind US bars: he is a young man locked up for engaging in behavior and speech deemed criminal, despite never posing an imminent threat. For No Separate Justice supporters, the problem is this: in paranoid “War on Terror” America, how can any Muslim get a fair trial? Just utter the words “radical Muslim” and their fate is sealed: plead or face almost certain conviction by jury, then disappear into solitary confinement or secretive prison units for decades.

And so it has been with Sadequee. Born in Virginia in 1986, he was raised in Georgia in a Bangladeshi-American family. His family has said that he went back to Bangladesh in 2005 after falling in love with a young woman he had met on a past trip. In 2006, just days after his wedding, Sadequee was leaving his family home in Dhaka with his wife for a day of shopping, when as many as eight or nine armed men surrounded his car. They dragged him out of the vehicle, placed a hood over his head, threw him into their van and drove off. His new bride watched it all from the backseat, helpless to intervene.

For four days, Sadequee’s family panicked, uncertain where he was or who had kidnapped him. It was only when the story broke on CNN that they learned their youngest child was facing criminal charges in the United States. Later, Sadequee told them that he had been disappeared onto a Bangladeshi military base, then picked up by the FBI and rendered back to the United States. (In 2009, a Dhaka court ruled that Bangladeshi authorities had acted “unlawfully” in transferring Sadequee to the FBI because the country has no extradition treaty with the US.)

Once back on American soil, Sadequee spent several months locked in Brooklyn’s Metropolitan Detention Center followed by 1,300 days in pre-trial solitary confinement in an Atlanta prison. His cell was not much bigger than an office cubicle. His only window had been blackened out. For more than three years, before he was convicted of any crime, he was held, effectively, in complete isolation. In a recent piece in Vice, United Nations Special Rapporteur on Torture Juan Méndez described this kind of pre-trial solitary confinement as “particularly objectionable” because “the pain and suffering of a mental or psychological nature that the person suffers prepares him psychologically to either confess or make statements against his interests, or even plead guilty.”

At issue, however, are not merely the conditions Sadequee suffered before trial; there are also questions about the charges Sadequee faced and the fairness of the trial itself. Prosecutors alleged that Sadequee had travelled to Canada in March 2005 to meet with three “co-conspirators,” allegedly to discuss attending a paramilitary training camp in Pakistan. They also presented “casing videos” of tourist landmarks around Washington, DC, images that Sadequee had taken and passed on to online contacts in the United Kingdom later convicted of terrorism charges. Other evidence presented at trial included transcripts from online chats with other Muslim teenagers and translations Sadequee conducted of religious texts for the now-defunct Tibyan Publication, a website that posted translations of controversial Islamic texts (and which some have claimed was linked to Al Qaeda). These were considered “secret evidence” for years and were only declassified to the defense three months before Sadequee’s trial.

Then there are questions about why Sadequee’s prosecution was pursued so aggressively. After his indictment, US Attorney David Nahmias released a written statement to the press. “The indictment does not allege that these defendants [Sadequee and his co-defendant] had proceeded to the point that they posed an imminent threat to the United States. But in today’s world we no longer wait until a bomb is built and ready to explode. The fuse that could lead to an explosion may be long, but once it is lit, we will use criminal prosecution—and any other tool that the law provides—to put it out.”

When does “putting the fuse out” actually mean clamping down on constitutionally protected activities? In its quest to keep America safe, might the government have gone too far in convicting people for what amounts to “pre-crime”?

During his opening statement, Sadequee rebutted the notion that any crime had been committed. “There was a lot of talk about doing a lot of things, but no one in fact did anything,” he said.

Young people in their teens and twenties often struggle to understand the world around them. And it’s no surprise that these years can sometimes be particularly difficult for Muslim youth, who must come to terms with both Islamophobia at home and American incursions abroad. Sadequee’s alleged terrorist communications online began when he was just 15. His family told The Nation that their son joined chats and websites in search of Muslims peers with whom he could explore and understand his religious and moral obligations.

Today, Sadequee is locked up in a Communication Management Unit in Terre Haute, Indiana, serving out his fifth year of a seventeen-year sentence. There are currently two CMUs in the country, which were created to limit inmates’ communication with the outside world, right on down to complete bans on physical contact during family visits. Critics have nicknamed the CMUs “little Guantánamos” for holding primarily devout and politically active Muslims, though others have wound up there too.

One of these is Andy Stepanian, an animal rights activist who also made the rain-soaked trek to the MCC that Monday evening. Stepanian spent five and a half months of a nearly three-year prison sentence at the second CMU, in Marion, Illinois, during which he, like Sadequee, endured extreme isolation. “The [Bureau of Prisons] always says that what they’re trying to do is corrective. But there is nothing corrective about denying access to their children or their loved ones, allow them to touch them and visit with them and have a conversation with them.”

Stepanian was a member of the SHAC 7, a group of activists convicted in 2006 for organizing against Huntingdon Life Science, a notorious product-testing lab. He and his codefendants were charged under the Animal Enterprise Protection Act (now called the Animal Enterprise Terrorism Act) for running a website that openly supported legal and illegal protest activity as part of the Stop Huntingdon Animal Cruelty campaign. Standing before the MCC, free now to walk around and even protest, he wondered about the significance of his freedom—the fact that his life went on even after he was labeled a “domestic terrorist.”

As the vigil wound down, with the MCC looming overhead and Sadequee facing many more years inside the CMU, it all started to feel desolate and forlorn. Yet Abu Yousuf, an Islamic scholar and advocate with the Muslim Justice Initiative, reminded everyone that bearing witness in front of MCC isn’t just for Sadequee and the others on the inside; the presence of the No Separate Justice campaign makes a difference for people on the outside, too. “Vigils like these mitigate the impact [of surveillance and policing]. [They] make it easier for speakers in mosques, in communities, to speak truth to power,” he said.

In the face of the injustices faced by War on Terror suspects, bearing witness once a month is an honest if humble place to start. And the sheer diversity of voices at the vigil is its own kind of rebuttal to the core logic of the “War and Terror,” that “you’re either with us, or you are with the terrorists.” As attested to by Page, Stepanian, Abu Yusuf and the rest of those present, that logic puts us all at risk.