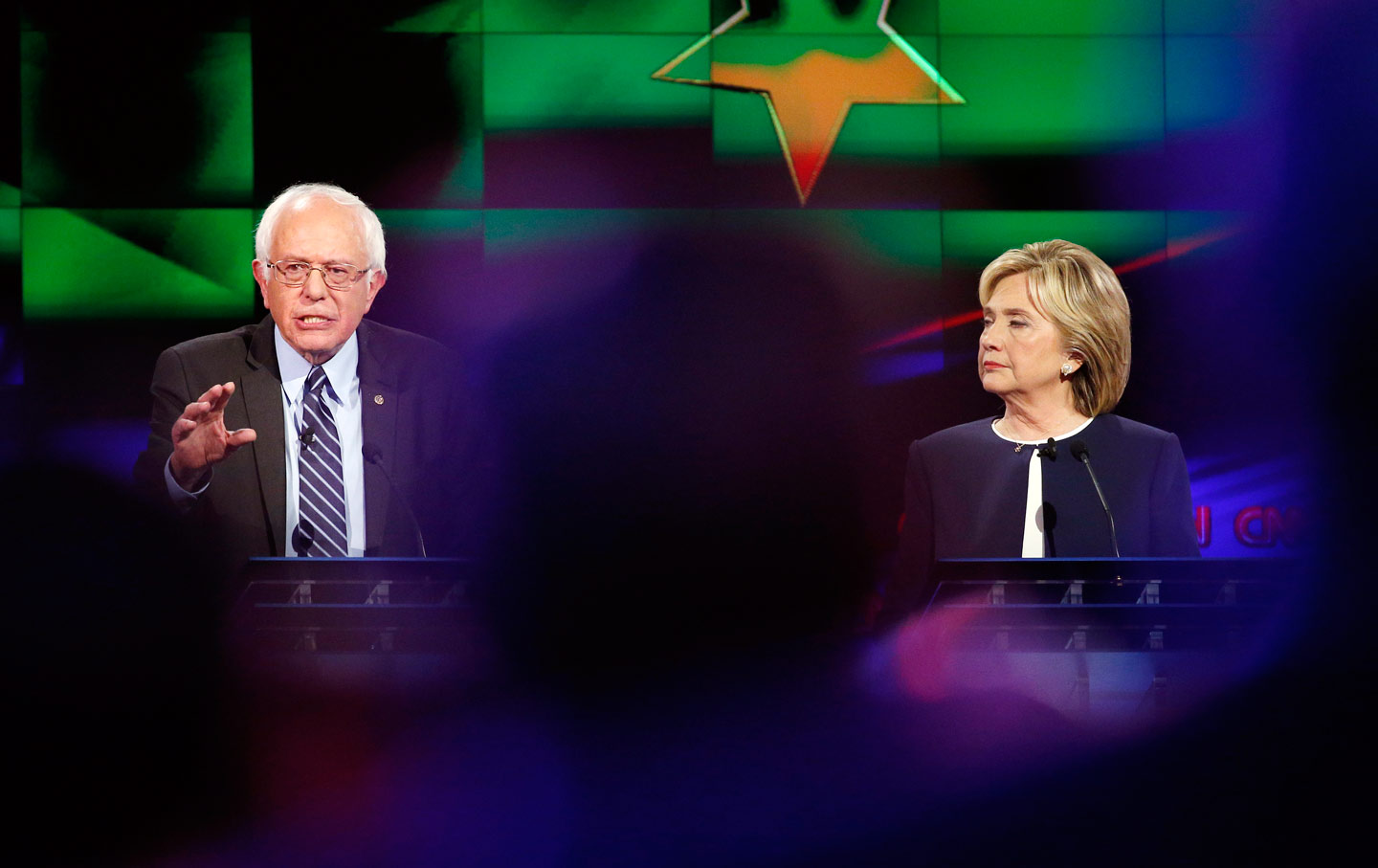 Now, that was a debate.

Courtesy of a Democratic Party that’s shifted left thanks to its base, for the first time in American history a national television audience was exposed to a serious discussion about capitalism vs. socialism, expanding Social Security, providing debt-free college, protecting reproductive rights, and jailing bankers. Early reporting tells us it was the most watched Democratic debate in history. What happened in Las Vegas Tuesday night surely won’t stay in Las Vegas.

Hillary Clinton, Sen. Bernie Sanders and former Maryland governor Martin O’Malley all had good nights, with debate performances strong enough to let each candidate’s supporters legitimately spin the night as a “win,” as they did. Progressives had a good night, too. The differences between Clinton and Sanders were made clearer, but not bitter. In fact, Sanders delivered the best line of the night, probably in service of Clinton. “The American people are sick and tired of hearing about your damn e-mails.”

But that’s Sanders: He knows the e-mail “scandal” isn’t a scandal at all, and he said so.

Sanders’s moral denunciation of the media’s fixation on Clinton’s e-mail to the neglect of real issues seemed to chase the issue from the stage, at least for the night. And that was good for Clinton. She was relaxed, but passionate; as D.D. Guttenplan writes,  “she seems to have figured out how to look presidential without seeming entitled—at least on television.”

She defended her shift left on many issues as coming to terms with reality. When CNN’s Anderson Cooper confronted her with a statement she made recently about being a “moderate,” Clinton retorted: “I’m a progressive, but a progressive who likes to gets things done.” That sums up Clinton’s pitch.

Sanders’s best moment, on his own behalf, was, typically, less about him. “Congress does not regulate Wall Street; Wall Street regulates Congress,” he declared to cheers, as he politely ripped Clinton for failing to support the restoration of Glass-Steagall banking regulations.

According to social-media mentions and search data, Sanders generated the most broad curiosity, if not appeal. But in some ways Clinton was playing to an audience of one–Vice President Joe Biden–and she did very well.

She did not self-destruct; quite the opposite. She proved that the Democrats don’t need a (white) man on a white horse to come in and save them from her candidacy. And Sanders proved the party, and the nation, has a real choice–between a center-left reformer and a (peaceful) left-wing revolutionary. Is there room for another center-left politician, however beloved?

On the day Fox News came out with a poll showing Clinton losing to the leading Republicans, and Biden winning, she needed this. Of course, the support for Biden is partly illusory. He’s not in the race yet. In the wake of his son Beau’s tragic and untimely death, he’s not a politician, he’s a grieving father, and across party lines, people revere him for the way he’s modeled bearing unbearable losses with kindness and dignity. Once he gets in the race, if he does, he’ll be a politician again–and one who ran for the presidency twice, and lost.

There were real differences on display Tuesday night. Sanders wants free college–he pitched it, correctly, as the 21st–century version of free high-school education. Clinton thinks even working-class families should contribute to what she called the education “compact.” He called for expanding Social Security broadly; she supported raising benefits for the poorest families, but wasn’t as strong as Sanders. He correctly criticized her call for a no-fly zone in Syria, and once again rapped her vote to authorize the use of military force in Iraq.

But it’s also worth noting that it was the lone woman on stage–Clinton–who argued most forcefully for equal pay, paid family leave, and reproductive rights, and who brought up the shameful attacks on Planned Parenthood. The men are all good on the issue; the woman led.

In some ways, Clinton was playing to an audience of one–Vice President Joe Biden–and she did very well.

I still don’t think Sanders has it quite right on guns. It’s an issue that makes him look like what he claims not to be, and mostly isn’t: a workaday politician, making compromises to hold his base. He talked over and over about the demands of representing a small, rural, gun-loving state. But he’s running for president of the United States, not of Vermont.

Martin O’Malley had some of his best moments here, needling Sanders about the way he protected the hunters and sports gunmen of Maryland when he passed his own state’s stronger gun regulations. And he brought to the debate with him a real-life example of a family that was hurt by Sanders’s vote to grant the gun industry immunity from suits by victims: Sandy and Lonnie Phillips, who lost their daughter in the Aurora massacre, sued the shop that sold James Holmes his ammunition, and wound up slapped with  $200,000 in legal fees when they lost.

O’Malley’s strong stands on guns, Wall Street regulation, and climate change, and his politically savvy parrying with both Clinton and Sanders, showed he belonged on that debate stage. Lincoln Chafee and Jim Webb missed their chance to shine. Chafee had a terrible moment when he chalked up his vote to repeal Glass-Steagall to his having just arrived in the Senate. He had a strong moment when he said of Edward Snowden, “I would bring him home. The courts have ruled that the American government was acting illegally.”

With his jibes at “diversity” and his attack on President Obama’s deal with Iran, Webb continues to seem an unlikely Democrat. It was as though he’d wandered straight out of Ronald Reagan’s Republican Party (he was Reagan’s Navy Secretary); it’s a measure of how far the GOP has shifted right that he thinks he belongs with the Democrats.

But the real action was with Clinton and Sanders. In some ways, the contest comes down to two different theories of change. Sanders’s is: It’s going to take a movement. Clinton’s: It’s going to take a president. In that sense, it’s a bit of a rerun of the 2008 Clinton-Obama contest, with Sanders playing the Obama role.

There’s (at least) one difference: Voters have seen the limits of an optimistic, idealistic approach to turning the American electorate against the GOP. They may be ready to elect a realist. Or they may realize that change really requires a movement, and give one to Sanders.