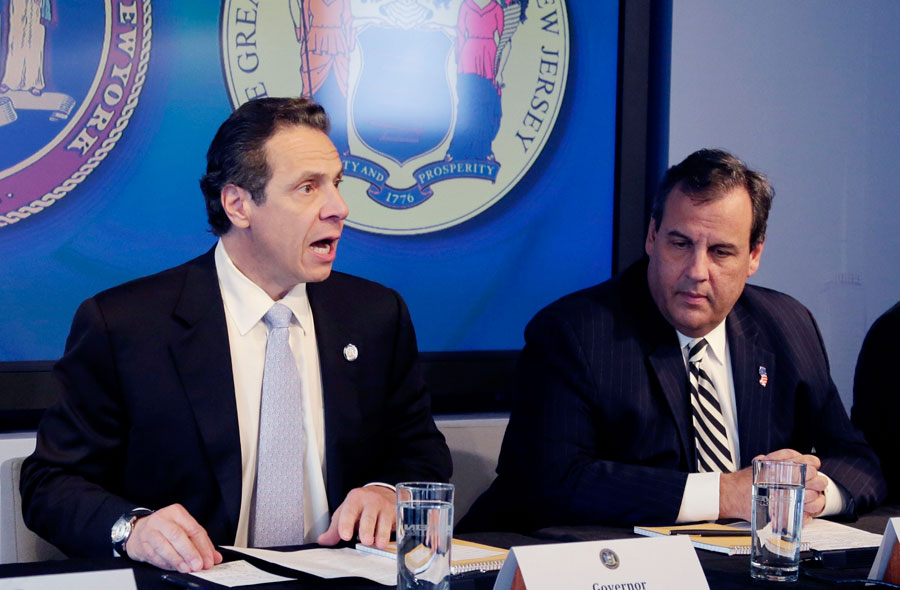 Governor Andrew Cuomo and Governor Chris Christie announce a mandatory quarantine for people returning to the United States through airports in New York and New Jersey who are deemed "high risk" for contracting Ebola on October 24, 2014, in New York City (AP/Mark Lennihan)

Just when you thought the Republican slime-ballers had run out of muck, you discover, no, they have more mud to throw at honorable people. And they are not just smearing Barack Obama. This time, they are disparaging the doctors and scientists at the National Institutes of Health and depicting them as weak-willed tools of the Democratic Party. If Americans fall for this, they may get the government they deserve—stripped of honest science and trustworthy decisions.

Republicans are not stupid, but they are shameless. They know people are rattled by the stealthy emergence of Ebola and that media hype has reflexively pumped up the danger and public confusion. NIH experts calmly explained what has to be done to defeat the disease and assured nervous citizens that healthcare teams are on the case. The GOP saw opportunity in unfolding tragedy and rushed to exploit it.

A political hack named Ed Rogers, corporate lobbyist and White House insider under Republican presidents, chortled gleefully over the political twist. His op-ed in The Washington Post hailed the brave governors of New York and New Jersey—Democrat Cuomo and Republican Christie—for intervening with a common-sense response. Any doctor or nurse who had gone to West Africa to treat Ebola victims should be automatically locked up in quarantine when they return home.

Rogers boasted, “If there is a Republican wave in the elections next Tuesday, pundits may well claim that it fully formed when Christie and Cuomo decided to go their own way with an Ebola strategy, despite objections from the White House.” People will be reassured by their common-sense intervention, he said, because “voters don’t trust the president to do the right thing and they are less likely to vote for those who echo the president’s blasé response.”

Actually, this know-nothing attack was launched by two well-known cynics of politics, both of whom lust after presidential ambitions. What Ed Rogers left out of the slime ball aimed at Obama is that it actually smeared some of the most experienced, knowledgeable and principled employees of the federal government. The real question at stake is whether the GOP demagoguery will succeed in destroying yet another citadel of advanced science and public values.

Dr. Anthony Fauci, who played a significant role in the successful war against AIDS/HIV, has explained patiently and repeatedly why rigid quarantines of healthcare workers would actually increase the dangers. “The best way to protect the US is to stop the epidemic in Africa and we need those healthcare workers so we do not want to put them in a position where it makes it very, very uncomfortable for them to even volunteer.”

If political pollsters were more devoted to the public interest than their political clients, they would ask people this question: Whom do you most trust to handle the battle against Ebola—Dr. Fauci, the longtime leader of the national Institute of Allergy and Infectious Diseases, or Chris Christie, the author of political vendettas against Jersey mayors who failed to support him? Or do people think Andrew Cuomo knows more than Anthony Fauci about how to organize the global counterattack against this dread disease?

The questions sound ludicrous, but they need to be asked. Once these guys finish with New York and New Jersey, they want to run the country. Let me restate the question in a harsher way people can understand: Who do you think will manage to kill more people with Ebola—Dr. Fauci or Governors Cuomo and Christie, the political twins?

Senator Elizabeth Warren, as she often does, is pushing back hard against the irresponsible politicians. On CBS This Morning, she said Christie “should bring out his scientists who are advising him on that because we know that we want to be led by the science. That’s what’s going to keep people safe—science, not politics.”

She went further and suggested the Republican party may have blood on its hands because it has pushed hard to cut NIH spending and thus research on the Ebola virus. “So now we’re in a position where instead of making those investments upfront, we wait until people die and now we’re going to spend billions of dollars and some real risk to our country.”