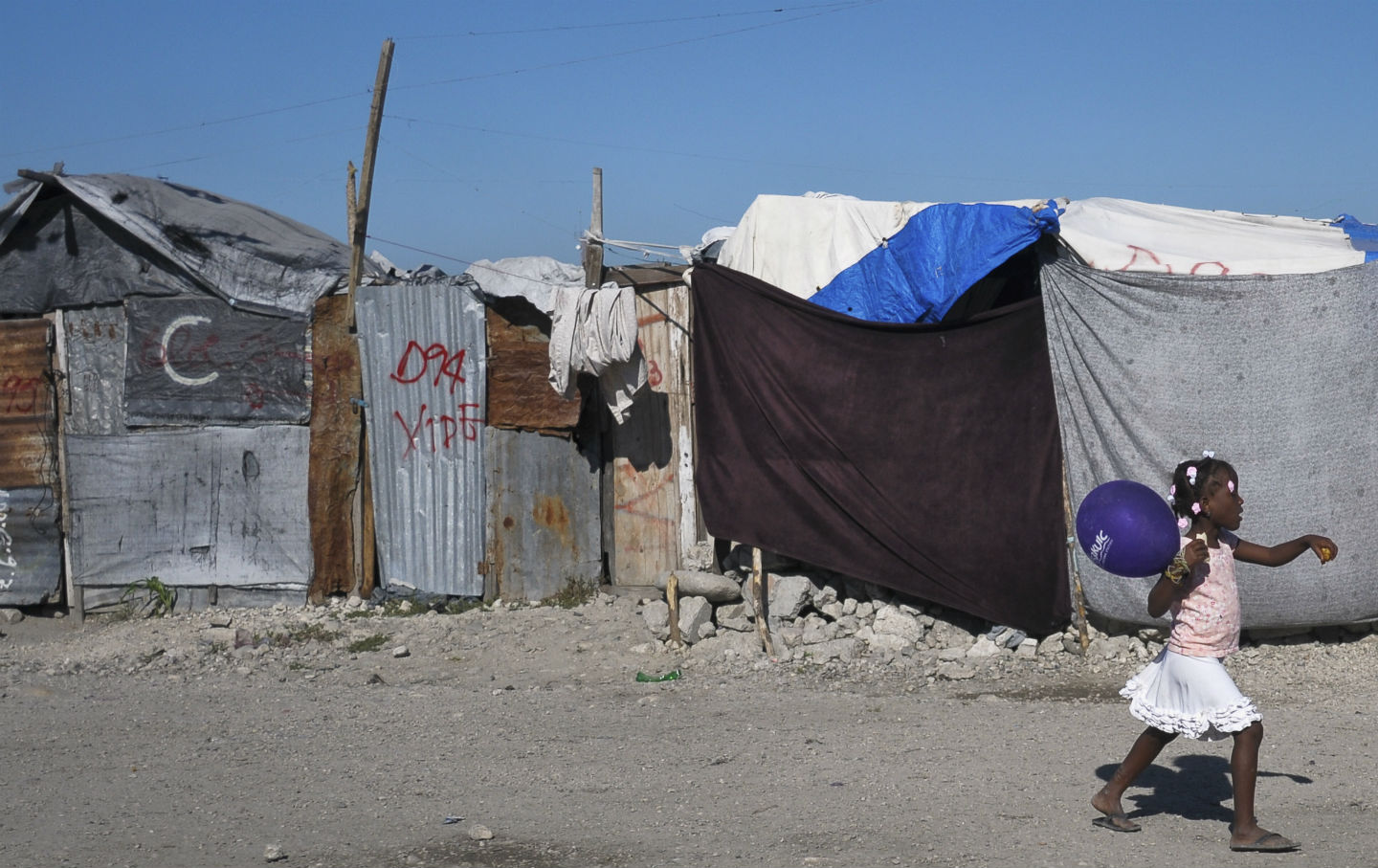 A Haitian girl walks through a camp for people displaced by the January 2010 earthquake in Port-au-Prince. (Reuters/Swoan Parker)

“Death and Neglect at Rikers Island Women’s Jail,” by Erika Eichelberger. The Intercept, May 29, 2015.

Poor medical care and systemic neglect create a dangerous—and even deadly—situation at Rikers Island. In this investigation, Erika Eichelberger delves into the abuses that people who are inmates in the women’s jail suffer at the hands of the doctors, nurses, and administrators who control their lives.

For many, the Human Rights Campaign’s logo, a yellow equal sign, has become synonymous with the struggle for LGBT rights in America. This internal HRC report recently obtained by BuzzFeed paints a very different picture— “Leadership culture is experienced as homogenous—gay, white, male.” Although the HRC already has a plan in place to better represent those who fall outside of those demographics, the report reflects a serious tension within the LGBT community, where the G often drowns out the concerns of the L B T.

“A Muslim woman beat Abercrombie & Fitch. Why her Supreme Court victory is a win for all Americans,” by Simran Jeet Singh. The Washington Post, June 1, 2015.

This Washington Post opinion piece explains why, in the Abercrombie lawsuit brought by Muslim-American Samantha Elauf, the Supreme Court’s decision to rule in favor of equal opportunity and religious freedom is a landmark decision in a time when employment discrimination is still a norm. “This case illustrates how we see ourselves as a society,” Singh writes. “Americans are one step closer to not having to choose between their faith and their work.”

Benjamin Hattem focuses on Israel/Palestine and the broader Middle East, as well as economic inequality, homelessness, and the prison system.
@benhattem

“FBI Successfully Runs Out the Clock on DOJ’s Inspector General Review of Use of Phone Metadata,” Empty Wheel. June 3, 2015.

The FBI has failed to produce documents to the DOJ Office of the Inspector General about how the bureau used phone metadata it collected. With the passage of surveillance reform that contracted NSA surveillance authorization but reauthorized FBI metadata collection, those documents may never be released.

“How the Red Cross Raised Half a Billion Dollars for Haiti ­and Built Six Homes,” by Justin Elliott, ProPublica, and Laura Sullivan, NPR. ProPublica, June 3, 2015.

America’s charity of choice, the Red Cross, promised thousands of Haitians new homes after disaster struck their nation. Despite claiming to have sheltered 130,000 people and helped more than 4.5 million Haitians “get back on their feet,” the organization has only built six permanent homes, leaving thousands to shacks made of rusty sheet metal, without access to drinking water, basic sanitation, and electricity. This joint ProPublica-NPR expose not only reveals the utter incompetence of a highly revered institution but highlights how “charity” organizations are able capitalize on the broken politics of disaster relief.

Just one of many stories of the absurd rise in the costs of affordable housing in East New York, this investigation of Linden Plaza further shows us that de Blasio’s proposed housing plan might not be doing nearly enough.

“A Choice for Recovering Addicts: Relapse or Homelessness,” by Kim Barker. The New York Times, May 30, 2015.

For years, reputable nonprofits and NYC government agencies referred homeless men and drug addicts to a number of unregulated “three-quarter houses”—seen as somewhere between halfway houses and homes—where landlords churn a profit at the expense of their residents’ health and futures. At Back On Track, a set of homes in East New York, the landlord made deals with drug clinics, then forced his tenants to enroll—and if they got clean, he would urge them to relapse so they could continue to qualify for housing. The article has already led de Blasio to announce a new task force on investigating three-quarter houses.

One of my friends has a birth-control alarm on her phone that reads, “Cats, not babies”—at 22, she knows she will never want children, but as a 23-year-old, equally career-driven woman, I know that, years from now, I do. The Nation’s Michelle Goldberg writes about her switch from not wanting children to being the mother of two—and why it’s OK to change camps.