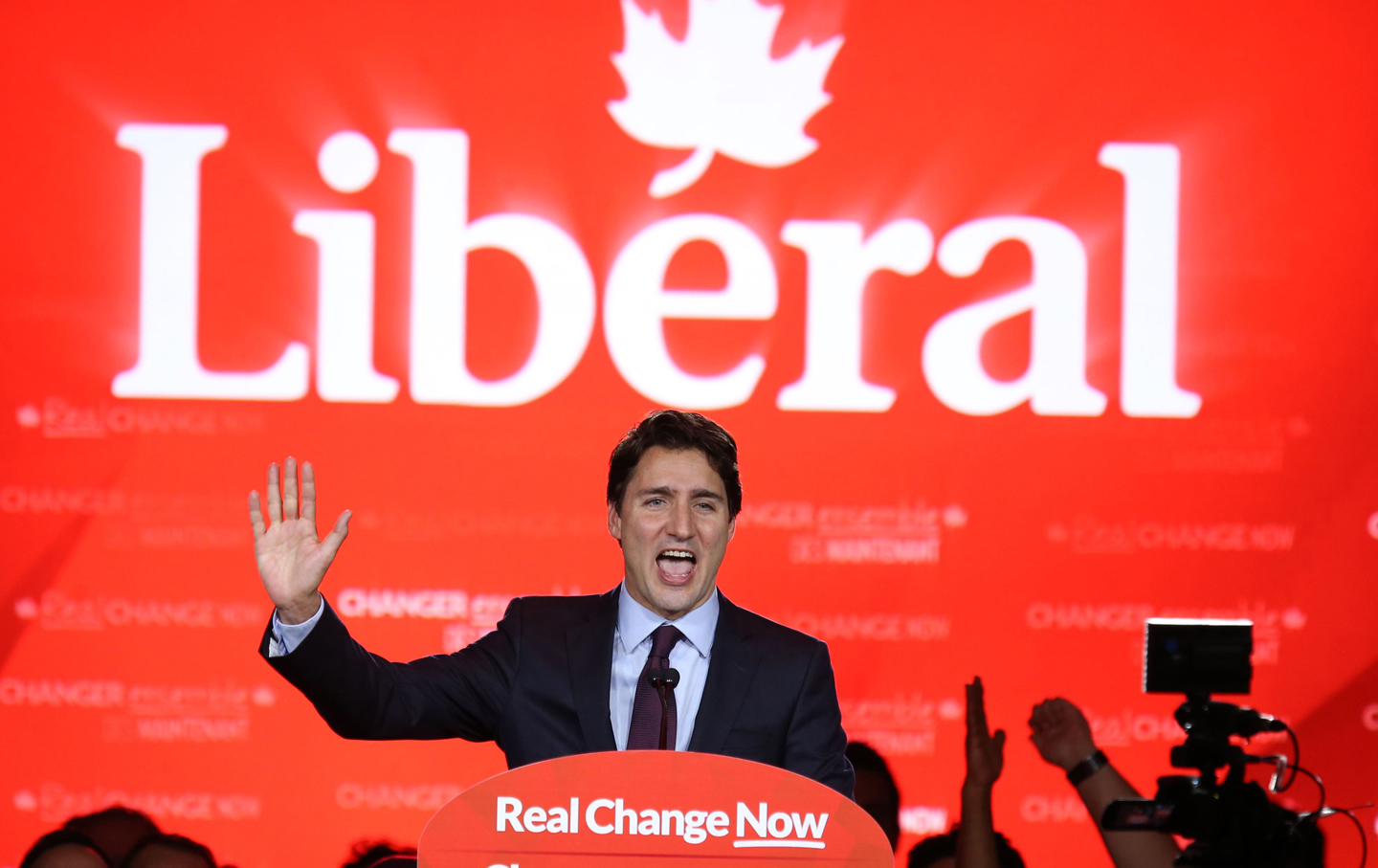 It may be true that American Democrats have nothing better to do than wait for Joe Biden to decide whether he will mount a third bid for the presidency. Or, failing that, to try to figure out what it is about democratic socialism that might appeal to underemployed young people who are burdened with staggering student debt and face the prospect of getting kicked off a parent’s health insurance plan.

But if America’s Democrats could look away from the 2016 horse race for just a moment, they might actually learn something about going big—and winning big—from Justin Trudeau.

The 43-year-old leader of Canada’s Liberal Party was not supposed to come out of the country’s 2015 election as its prime minister. At the start of the race, Conservative Prime Minister Stephen Harper, ally of George W. Bush, role model for Scott Walker, was locked in serious competition with a cautiously left-leaning New Democratic Party. The traditionally centrist Liberals (at their best “vital center,” at their worst blandly managerial), having been very nearly obliterated in the previous election, did not look particularly viable. And party leader Trudeau was frequently dismissed as the good-looking but inexperienced son of a great 20th-century prime minister.

“Seen at the beginning of the campaign as the least ready for the election of the three main party leaders,” observed the Toronto Star at the end of the campaign, “Trudeau managed in 11 weeks to shape a compelling political narrative and provide Canadians with a credible alternative to Harper and the NDP’s Thomas Mulcair.”

Trudeau placed a lot of emphasis on hope and change, which drew comparisons to Barack Obama’s inspired campaigns of 2008 and 2012. Obama and the Democrats faced significant challenges in both those US elections, but Obama’s skills and vision — and the ability of his campaign to forge unprecedented coalitions — transformed those electoral moments. In 2016, however, Democrats will not have Obama on the ballot; and as the 2010 and 2014 elections cycles confirmed, Democrats struggle politically in such circumstances.

That’s why Trudeau’s example is instructive.

As a party leader seeking to renew a battered brand and to displace a wily incumbent, the Canadian faced skepticism about his own leadership skills and about the ability of the Liberals to get their act together. As such, he had to give new meaning to the Liberal promise of “real change”—just as American Democrats in 2016 races for the White House and Congress will have to frame a message that, while building on Obama’s accomplishments (and perhaps showing a bit more respect for the president’s political wisdom than many Democrats did in 2014), gives a sense of where the party will go next.

Trudeau surprised almost everyone by running a campaign that veered left on economics—so much so that analysts noted that, on several critical measures, the Liberals outflanked the historically social-democratic NDP.

Trudeau did not run as a radical, which makes sense, as he is not one. But he did make a reasonably radical break with the tepid politics of too many political leaders in this age of austerity. Instead of fretting endlessly about spending and budget deficits, he declared that his priorities would be job creation and policies to benefit the middle class. And he said he would invest in the future, rather than cheating it with austerity cuts.

Trudeau proposed to tax the rich in order to fund programs for everyone else, declaring that “We can do more for the people who need it, by doing less for the people who don’t.” (And, notably, he coupled that concern for people who need economic help with a warm embrace of Canada’s ethnic and racial diversity that was starkly different from the Donald Trump–like messaging about immigrants and religious minorities that Harper employed in the final days of the campaign.)

More vital even than the promise of fair and progressive taxation after so many years of Harper’s of-the-rich, for-the rich, by-the-rich governance, however, was Trudeau’s proposal to invest massively in job-creating infrastructure programs. To fund the investment, Trudeau proposed that Canada could and should accept a reasonable level of deficit spending.

Explaining that there are many kinds of deficits, Trudeau argued that “the fiscal deficit isn’t the one that concerns Canadians and certainly doesn’t concern economists that much. It is the infrastructure deficit that is so concerning to so many people. That’s what’s slowing down our growth.”

As both the Conservatives and the NDP criticized his approach, Trudeau went all in, saying, “The Liberal party is the only party standing straight, looking Canadians in the eye and saying, ‘We need investment and that is what we are going to do to grow the economy, to balance the books in 2019.’”

He even cut a television ad—which became a YouTube sensation—that explained Keynesian economics on an escalator.

The ad features the son of the iconic Canadian Prime Minister Pierre Elliott Trudeau trying to walk up on a down escalator. Unable to get ahead on the escalator, Trudeau explains that the experience mirrors “what’s happening to millions of Canadians in 10 years under Stephen Harper.”

‘We need (public) investment and that is what we are going to do to grow the economy..."—Justin Trudeau

Harper’s “ideas to give benefits to the wealthy but make cuts to everything else has made it harder for most people to get ahead,” says Trudeau, as the escalator jolts to a halt. “And [NDP leader] Mulcair promises more cuts. Now is not the time for cuts.”

The escalator starts up, heading the right direction now as Trudeau walks to the top and announces, “In my plan, we’ll kick start the economy by investing in jobs and growth and lowering taxes for our middle class. That’s real change.”

Trudeau has a lot to prove as he forms a new government, and seeks to keep his promises. He may disappoint generally, and he is likely to disappoint the left and organized labor on some economic questions—including, perhaps, the debate over the Trans-Pacific Partnership trade deal. (The labor-backed NDP, which formed the official opposition in the last Canadian parliament, suffered a significant setback this year. But it will still hold 44 seats in the new parliament, more than 10 percent of the total. As such, it will be positioned to aggressively challenge Trudeau on trade issues, and to pressure him to make real his campaign-season promises to take on failed austerity policies.)

There is no need to make Trudeau a hero, or an across-the-board role model. But there is every reason to recognize the genius of the escalator ad, and the role played by Trudeau’s broad and bold economic message in producing a dramatic political shift. At the end of a campaign where they started in third place, Liberals have achieved an absolute majority in parliament.

It’s a powerful one, with the potential to push politics beyond the limp austerity versus austerity-lite debate that has turned so many Americans (especially young Americans) against the idea that voting matters. This is, at least to some extent, what Vermont Senator Bernie Sanders is talking about when he proposes a “political revolution,” and it is what Massachusetts Senator Elizabeth Warren and Congressional Progressive Caucus leaders such as Keith Ellison of Minnesota and Raul Grijalva of Arizona have been hinting at with big proposals to address student debt, alter trade policies, and invest in infrastructure in the United States.

But the boldness and the optimism—and the creativity—with which Trudeau delivered the message is instructive.

The point here is not to suggest that Hillary Clinton should get on an escalator, nor that American Democrats should borrow the entire Trudeau playbook. But a few pages are worth studying.

It is certainly true that Canada’s political process is distinguished by traditions, structural characteristics, and nuances of party history and personality that make the country’s elections very different from those in the United States. Despite the increasingly “presidential” character of Canadian campaigns, voters choose parties rather than presidential candidates (and party leaders sometimes lose in their own constituencies and end up not just out of the running but out of Parliament). Canadians have more political options than Americans: Liberals, Conservatives, and the NDP run provincial governments; the Greens and the Bloc Québécois sit in parliament. Canada has shorter campaigns that are dramatically less expensive. Canada has a different media system, with stronger commitments to public broadcasting, serious debate, analysis, and dialogue. And, of course, while Canadian Liberals were campaigning to turn out a Conservative prime minister, American Democrats will be campaigning to carry on from a Democratic president while at the same time ending Republican control of Congress.

Despite the distinctions, however, American Democrats can learn from the new politics and the new economic messaging seen in a neighboring North American country that faces many of the same challenges confronting the United States. And they should recognize that Justin Trudeau was right when he echoed Abraham Lincoln in his Monday evening victory speech and declared: “You can appeal to the better angels of our nature and you can win while doing that.”

“We beat fear with hope. We beat cynicism with hard work. We beat negative politics,” Trudeau told the cheering crowd. “In Canada, better is always possible.”

With an embrace of progressive taxation, public investment and a humane approach to economics, Democrats could in 2016 celebrate President Obama’s accomplishments while holding out the promise that, “In America, better is always possible.”