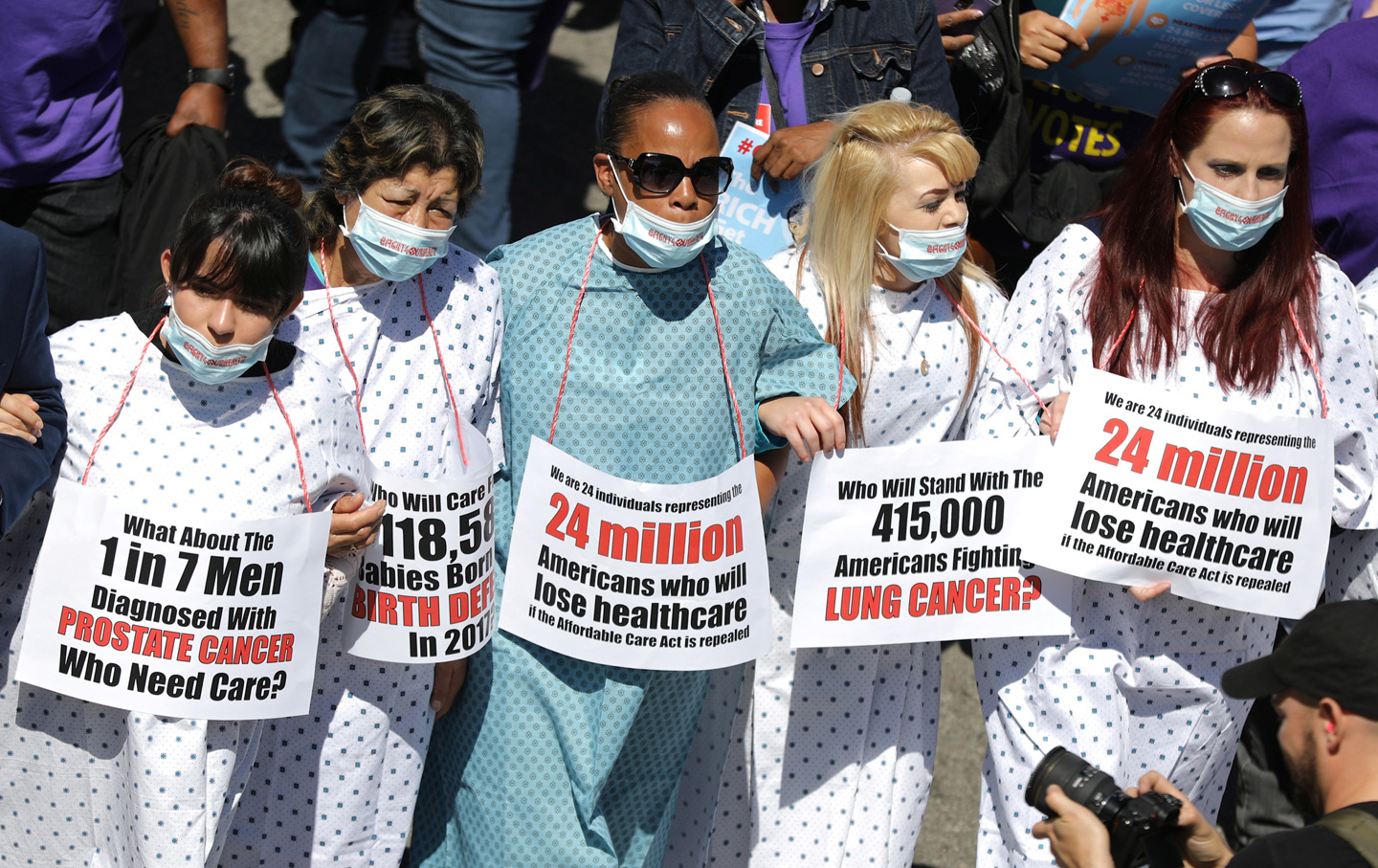 This is where the fun begins. We’ve tried marching, writing letters and e-mails to our representatives, calling their offices, and showing up at town halls. Some of us have gotten arrested. We’ve got to keep doing all this. But the potency of these strategies has started to wane. They’ve become the din in the background, the expected and usual. The 217 House Republicans who voted for the American Health Care Act showed that if you’re hell-bent on crazy, you can ignore a lot of criticism and wall yourself off by refusing to have town-hall meetings, letting voicemail fill up, leaving the office phone off the hook, walking past the protesters.

The GOP Will Tell Lie After Lie to Pass Trumpcare

To stop Trumpcare, we’re going to have to get a lot more creative in order to surprise and shock. And we’re going to have to get closer up to those in power and those who support them. Getting into people’s heads requires keeping them off balance, making them feel at risk—not physically—but clearly letting them know that they have something at stake now, that the bubble they live and work in is no longer safe. The old-hands at this kind of political theater are the members of ACT UP, the AIDS Coalition to Unleash Power, of which I was a member in the 1980s and ’90s. Many of us are still around, and many have re-rganized in groups like New York City’s Rise and Resist to bring a gay-old-time to the age of Trump.

ACT UP got up close and personal with those who were trying to kill us through public policy (or lack thereof) or corporate decision-making. Peter Staley, whose history many know from the Oscar-nominated How to Survive a Plague, was one of ACT UP’s great impresarios. His greatest work? That would be putting a condom—a gigantic one—over Senator Jesse Helms’s house in suburban Virginia with the message: “Helms is deadlier than a virus.” Bostonian ACT UP–ers Steven Skuce, Raymond Schmidt and Derek Link delivered hundreds of ping-pong balls dressed up as eyeballs to the front lawn of pharmaceutical executive Lars Bildman, to protest the plight of people with AIDS fighting cytomegalovirus infection that would rob them of their sight.

Find these tactics a bit too aggressive and intense? Well, then bake some cookies and show up at your representative’s home for a visit. Politicians knock on constituents’ doors, who’s to say we can’t knock on theirs? Who doesn’t like a good snickerdoodle or oatmeal cookie and some representative democracy? ACT UP once showed to the summer home of President George H.W. Bush in Kennebunkport, Maine, with thousands of people from around the country to ask: “Barbara, can George come out to solve the AIDS crisis?” Politicians—and their staffers—are all fair game now. They are making decisions that endanger our lives; getting out of our comfort zones and making them uncomfortable is the least we can do.

And it’s not just politicians we should target but the institutions and industries that enable them. One of ACT UP’s other virtues was that no one knew where they’d show up, which lines they’d be willing to cross. Sleepy federal agencies in quiet surburban towns outside of DC like the National Institutes of Health and Food and Drug Administration saw massive demonstrations. ACT UP members invaded the CBS Evening News and MacNeil/Lehrer NewsHour studios. They took over Grand Central Station and St. Patrick’s Cathedral. Again, these were heavily planned and orchestrated events, which put many at risk of arrest.

Not everything needs to be at this scale, not everything has to be a big protests or wild zap. In fact, some of these tactics have lost their ability to break into the news cycle or get the attention of politicians. This means we all have to become artists of protest, crafting new ways to razzle-dazzle them. The people at beautifultrouble.org have created a resource guide for the creatively inclined with a catalogue of inventive ways to influence our elected leaders. It’s a place to start. The current political climate offers a challenge to our imaginations, which we should gladly take on. There is joy in creative resistance.

Finally, keeping the pressure on, by bringing the shit they’d like to do to us back to their own doorsteps, keeping them guessing about what we’ll do next is important. In the end, however, the best thing we can do is make the politicians who support Trumpcare unemployed and unemployable by organizing to the get them out of office in the next election cycle or the one after that. And the letters, the calls, the e-mails, yes, we have to do that too, bill by bill, executive order by executive order, agency decision by agency decision. Leave them no respite, no cover, no peace.