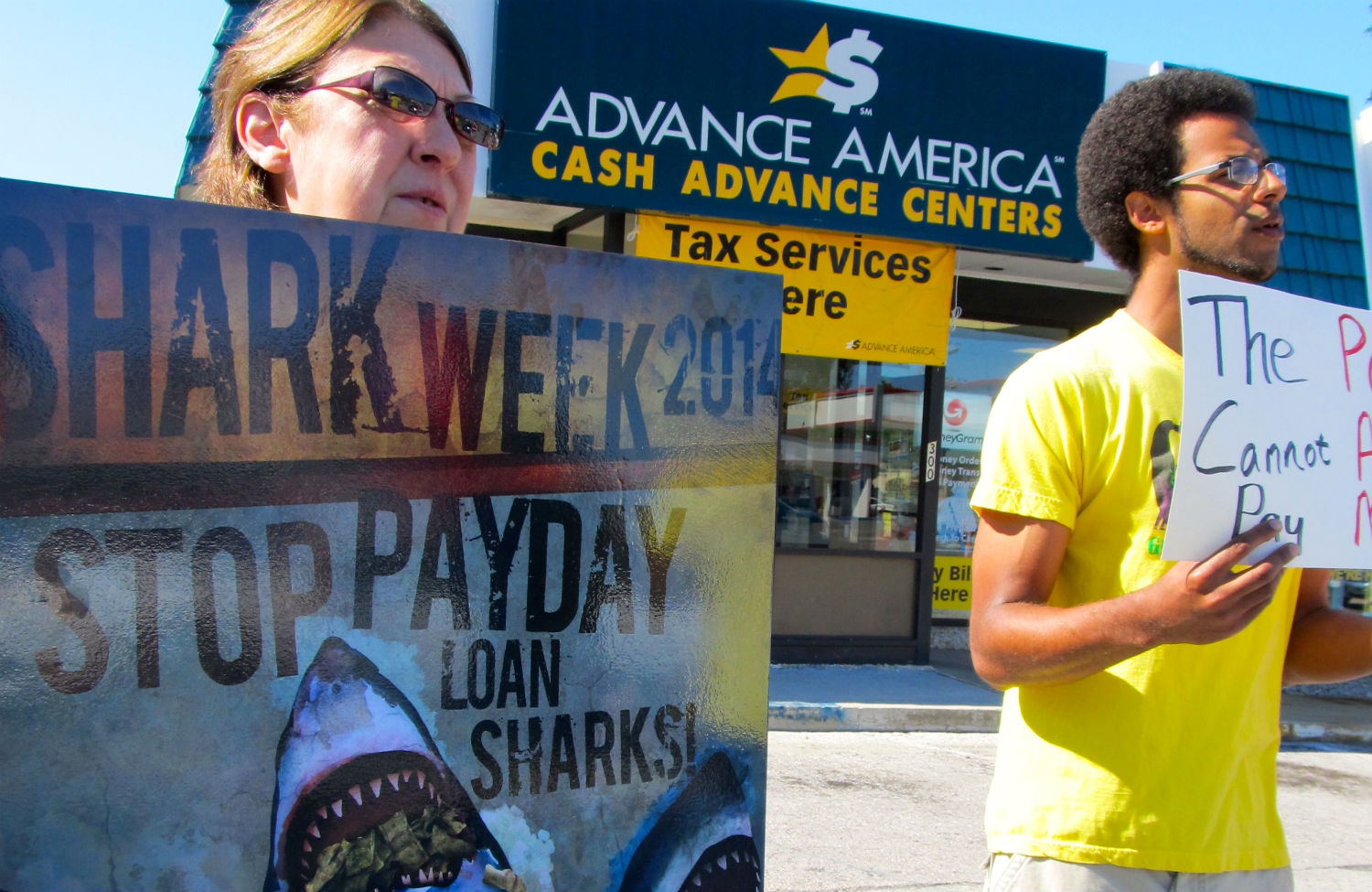 Activists rally Tuesday outside an Advance America outlet in Columbia, Missouri. The company is the largest payday lender in the US. (Photo by Ryan Betz of GRO Missouri)

As much of America turns its attention to the Discovery Channel’s Shark Week, activists are bringing attention to a different kind of predator—payday lenders. In Illinois, Iowa and Missouri this week, targeted actions outside payday loan outlets aim to highlight the debt traps that so often plague their clients.

At one event Tuesday morning in Columbia, Missouri, activists rallied outside an Advance America “cash advance center,” which offers residents short-term, high-interest loans for relatively small amounts of money. Advance America is the largest payday lender in the United States.

Activists held signs reading “the poor can not afford to pay more” and some dressed as sharks, according to photos reviewed by The Nation, while a Navy airman described being trapped by a payday loan. Further actions are planned this week in Des Moines, Iowa and Springfield, Illinois.

Payday lenders tend to target people of color in high-poverty areas. According to a study by National People’s Action, which is organizing these “Shark Week” protests, such neighborhoods can have as many as three times the payday lenders as in relatively white, affluent areas.

The basic scheme is to offer these high-interest, short term loans—loans generally cost borrowers about one-third of their income, according to Pew Charitable Trusts—and then entrap customers to coming back and taking out another loan in order to cover the first one. The industry likes to boast that 94 percent of its loans are paid on time, but what it doesn’t mention is that 94 percent of borrowers also become repeat borrowers within thirty days. A study by the Consumer Financial Protection bureau last year found that two-thirds of payday loan borrowers take out seven or more loans in a year.

This is the explicit intent of the industry—at a conference in 2007, Cash America CEO Dan Feehan explained that “the theory in the business is you’ve got to get that customer in, work to turn him into a repetitive customer, long-term customer, because that’s really where the profitability is.”

But the idea of deliberately creating poverty traps for the already desperate has increasingly drawn the interest of local and federal regulators, including the Department of Justice and the Consumer Financial Protection bureau. On Tuesday, prosecutors in New York charged local payday lenders with running an actual “usury scheme.”