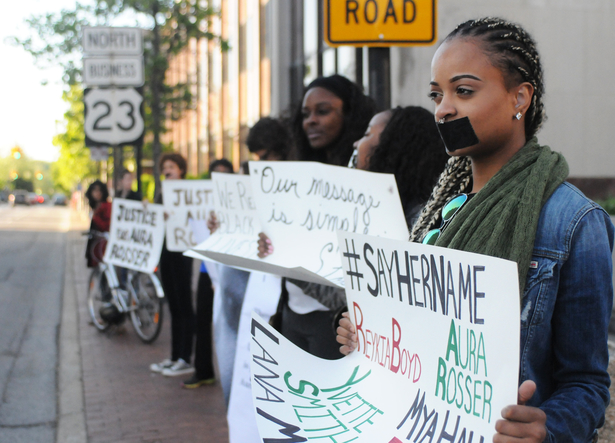 In Ann Arbor, a silent protest for black women and girls who have lost their lives to state violence. (Photo: San Pham, Michigan Daily)

This post is part of The Nation’s biweekly student movement dispatch. As part of the StudentNation blog, each dispatch hosts first-person updates on youth organizing. For recent dispatches, check out May 1 and May 18. Contact studentmovement@thenation.com with tips. Edited by James Cersonsky (@cersonsky).

On May 21, Black Youth Project 100, Black Lives Matter, and Ferguson Action called for a Day of Action to End State Violence Against Black Women and Girls in an effort to complicate male-centered narratives about anti-black violence that often exclude the experiences of black women. In New York City, we called out the names of black women lost to police violence as we marched in funeral procession to City Hall where a budget proposal for 1,000 new cops was being made. Overall, more than 20 cities organized actions to advocate for black women just as we stand for black men. With #SayHerName trending nationally and attention being drawn to the high rates of police murder, incarceration, and sexual assault of black women, our generation’s black youth-driven movement made another strong move to bring the needs of the most marginalized of our communities to the center of our work.

In the Bay, we responded to the Black Youth Project’s call with a day of action: Black women reclaimed our bodies, agency, and Afrikan tradition in a shutdown of San Francisco’s financial district in the morning; the Anti-Police Terror Project uplifted the name and life of Yuvette Henderson, a mother who was murdered by Emeryville Police on February 3, in the afternoon; and the local BYP chapter facilitated a night march, mostly comprising black women and children, through the streets of Oakland. At the march, we were met with police aggression, as the Oakland Police Department confronted us in full riot gear to enforce a previously unannounced curfew ordered by Mayor Libby Shaaf—and deemed unconstitutional by the National Lawyer’s Guild. Since then, we have taken the streets two more times in defiance of the curfew. In the process, the OPD has targeted protesters, citing 47 and arresting five, some of whom were abiding by police orders. We demand an immediate end to the curfew, the dropping of all charges and fines for #BreakTheCurfew protesters, an abandonment of Mayor Schaaf’s request for more police officers, and an end to FBI surveillance in Oakland. Until our demands are met, we will continue to take the streets that will always be ours.

On May 13, after being constantly rebuffed by the University of California–Santa Barbara administration in trying to set up meetings to discuss current sexual assault policies on campus, 40 students, faculty, and parents staged a sit-in in Chancellor Yang’s office. During the sit-in, students discussed how the current policies were ineffective and discussed ways to address concerns while awaiting the chancellor. After 13.5 hours, he signed all 13 of our demands, including immediate removal of perpetrators from university housing if found guilty through the campus adjudication process and agreement to publish a quarterly report aggregating data of cases reported to the university.

On Tuesday, May 19, Emma Sulkowicz and four other students carried her mattress as she walked across the stage at Columbia University’s graduation ceremony. For the past year, Emma’s Carry That Weight project has brought national attention to the epidemic of sexual violence on college campuses, and served as a powerful protest against Columbia’s mishandling of the issue. Despite the university’s pointed efforts to ban “large objects” from the ceremony, Emma’s action was a sobering reminder that Columbia’s response to sexual assault continues to be dangerously inadequate. At various commencement-week ceremonies, members of No Red Tape and the Coalition Against Sexual Violence also handed out strips of red tape for students to place on their caps to show solidarity with survivors of sexual and domestic violence. Activists at Columbia will continue to hold the administration accountable for student safety, protest the ongoing presence of rapists on campus, and work to honor the voices of the survivors so often silenced in favor of the university’s public image.

On May 22, the Newark Students Union organized a citywide walkout in protest of Superintendent Cami Anderson’s “turnaround” policy. Under turnaround status, targeted schools lose half their teachers and staff, receive budget cuts for extracurricular programs, and extend their school days. We believe that the implementation of any such process should occur with the consent of the community—and that actions by Anderson, who was appointed by the state, are an attempt to undermine public education and further the neoliberal model of privatization. Outraged by these moves, 2,000 students from more than 10 schools walked out and marched to the steps of City Hall. From there, we took over Newark’s busiest intersection and shut down McCarter Highway.

6. In Charleston, a Fight for the Public

On Tuesday, May 26, 40 students from Burke High School in Charleston, South Carolina, rallied outside the Charleston County school district office before delivering our thoughts to the CCSD board of trustees. We staged this action, the March on 75 Calhoun, to demand greater input from Burke students, parents, and community members in what happens to Burke High—which could include turning Burke into a charter school. The action follows a series of meetings attended by students, parents, and community members. On June 11, we will present our issues to elected officials at a meeting at the high school.

7. In Omaha, a Mark for Native Justice

On May 19, after 13 years in the Omaha, Nebraska, school district, we prepared to walk the stage from South High School. However, administrators and faculty felt that our Native American cultural and ceremonial practice of wearing the eagle plumes that we receive in acknowledgement for this achievement would be a distraction from the ceremony. In response, family and community members went before the school board to inform it that it is our right as enrolled members of federally recognized tribes to be allowed to wear our eagle plumes per 42 US Code § 1996—Protection and preservation of traditional religions of Native Americans. The morning of graduation, the district decided to allow the eagle plume to be worn and agreed to reconsider its practices.

8. The Largest University to Divest in History

On May 21, the Board of Regents of the University of Hawaii voted unanimously to divest its $66 million endowment from coal, oil, and gas companies, the largest university to divest to date. The ten-campus UH system joins over 200 institutions across the globe that have pledged to pull their investments from fossil-fuel companies and replace them with green funds. Unlike at other campuses, such as Harvard, the campaign at UH, DivestUH, was highly collaborative. Students, faculty, and community members presented signatures, resolutions, and testimony to the regents, who engaged in constructive dialogue and formed a multi-stakeholder task force. Our next steps are to tackle the $260+ million fund of the UH Foundation, an independent fundraising organization, and to use this win to spur stronger sustainability commitments from the university and state.

Editor’s note: On Tuesday, May 26, Baltimore youth and community members shut down traffic on I-395 to protest the state’s decision to put $30 million into a juvenile prison while decreasing education funding. (Video: The Baltimore Sun)