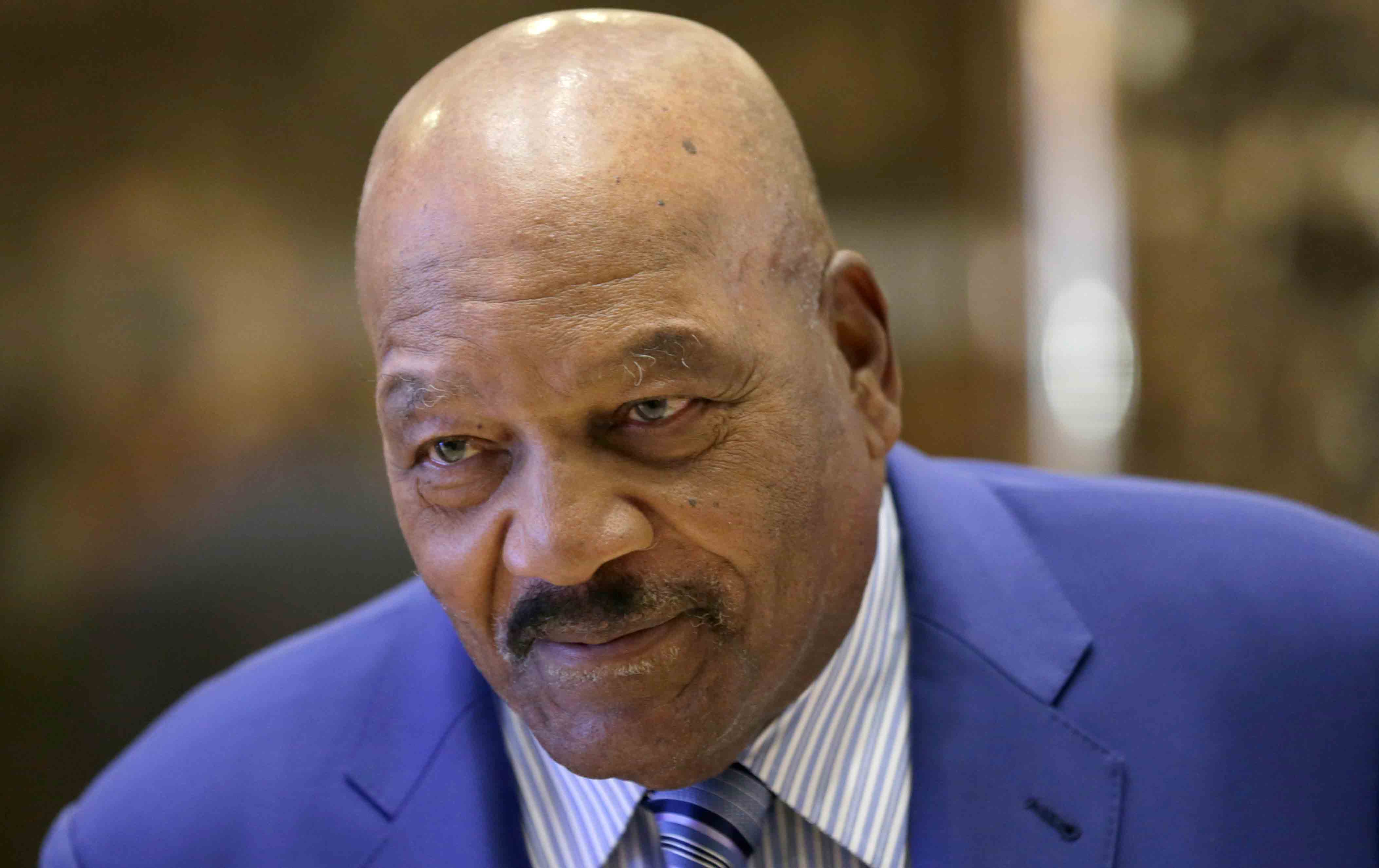 Many political sports fans were shocked when 80-year-old football legend Jim Brown recently came out in fulsome support of Donald Trump. Now he has drawn even more ire. In an appearance on CNN, he bashed civil-rights legend Representative John Lewis for calling Trump “illegitimate”:

John Lewis has great history as a civil-rights fighter. As a young man, he was one of the guys out there who was leading the parades during the King era. So, we all respect his history. But then I hear him crying the blues about Mr. Trump and saying he’s an illegitimate president, I take offense to that.

Sportswriter Mike Freeman, who wrote a terrific 2006 biography of Brown called Jim Brown: The Fierce Life of an American Hero, tweeted, “Jim Brown just said John Lewis is ‘crying the blues.’ Who is this and what have you done with Jim Brown?”

This comes on the heels of an event last month when Trump sat down with Brown and former NFL player Ray Lewis. Brown left the meeting saying, “I fell in love with [Trump] because he really talks about helping black people.” That night, Brown was on television with right-wing Fox News talker Sean Hannity to sing Trump’s praises.

It’s an ugly chapter for someone my editor once called “part of the holy trinity of athlete-activists with Muhammad Ali and Bill Russell.” It also puts Brown at odds with the fellow iconic athlete-activists of his generation like Kareem Abdul-Jabbar, Dr. John Carlos, and Dr. Harry Edwards, who have called for active resistance to the Trump agenda.

It even puts him at stark and tragic odds with his friend the late, great Muhammad Ali, who constructed his entire funeral as a rebuke of Donald Trump’s anti-Islamic bigotry.

And yet as disturbing as Jim Brown’s stance is, it’s not actually all that surprising if you look at his political history. In the 1950s and 1960s, Jim Brown was not a fan of Dr. King’s civil-rights movement. In that sense, he’s been at odds with John Lewis for over 50 years.

In 1963, Brown had this to say about the civil-rights movement: “Dr. King is a great man because he has courage and because he has the ability to draw the masses together and move them and therefore make a tremendous contribution to the Negro restlessness, but he is a preacher and a speechmaker. I for one will not march down the street and kneel and pray for my rights. That is just not my shit.”

In 2014, I stayed at Brown’s house for a week to interview him for a political biography I am writing about him. While I was there, he said to me, “I didn’t think much of Dr. King. I mean, I am not trying to put him down, but if you think about the majority of the rhetoric, it’s about what’s being done to us. It doesn’t have damn near anything that says what we’re going to do for ourselves.”

This position was shared by the right wing of the Black Power movement, which was focused far more on building small businesses and the economic base of the black community than other forms of resistance. So it was no wonder Jim Brown endorsed Richard Nixon for president in 1968. Nixon himself appealed to this wing of the movement in a speech, saying, “What most of the militants are asking is not separation, but to be included in—not as supplicants, but as owners, as entrepreneurs—to have a share of the wealth and a piece of the action.” Federal government programs, Nixon said, should “be oriented toward more black ownership, for from this can flow the rest—black pride, black jobs, black opportunity and, yes, black power.”

This appealed to Brown and spoke to his desire to try and work the system for economic gain as a strategy for resisting racism. His one-time fiancée Debra Clark said to me, “Jim is highly intelligent, and he knew that you have to get in bed with the devil to get stuff done. It’s not that he agreed with Nixon, but he knew you had to get dirty to get in the game.” Jim Brown has worked with people in gangs for decades and gone to neighborhoods most celebrities would never set foot in, not to organize resistance but to tutor them in how to make a living. This is his method of political engagement, and he makes no apologies for that.

In other words, none of this is new. The only thing that’s changed is now people across the sports world are—finally—unafraid to criticize Jim Brown.

There are other issues at play here as well. In interviews with Jim Brown, I learned that he was very hurt that President Obama never asked him for a meeting or an audience. President Obama would collect star athletes and legends from the past around him, people like Brown’s best friend Bill Russell, yet there was no space for Jim Brown at Obama’s table. That is most likely due to Brown’s long history of allegations of violence against women. This history is not a problem for Donald Trump, for reasons that should be self-evident.

Interestingly, next week there is going to be a panel at San Jose State featuring Dr. Harry Edwards, Jim Brown, Kareem Abdul-Jabbar, and other legends. Let’s see what happens at that event, because this reckoning with Jim Brown’s politics has been 50 years in the making. The genuflecting is over, and that is healthy, even if it stings.