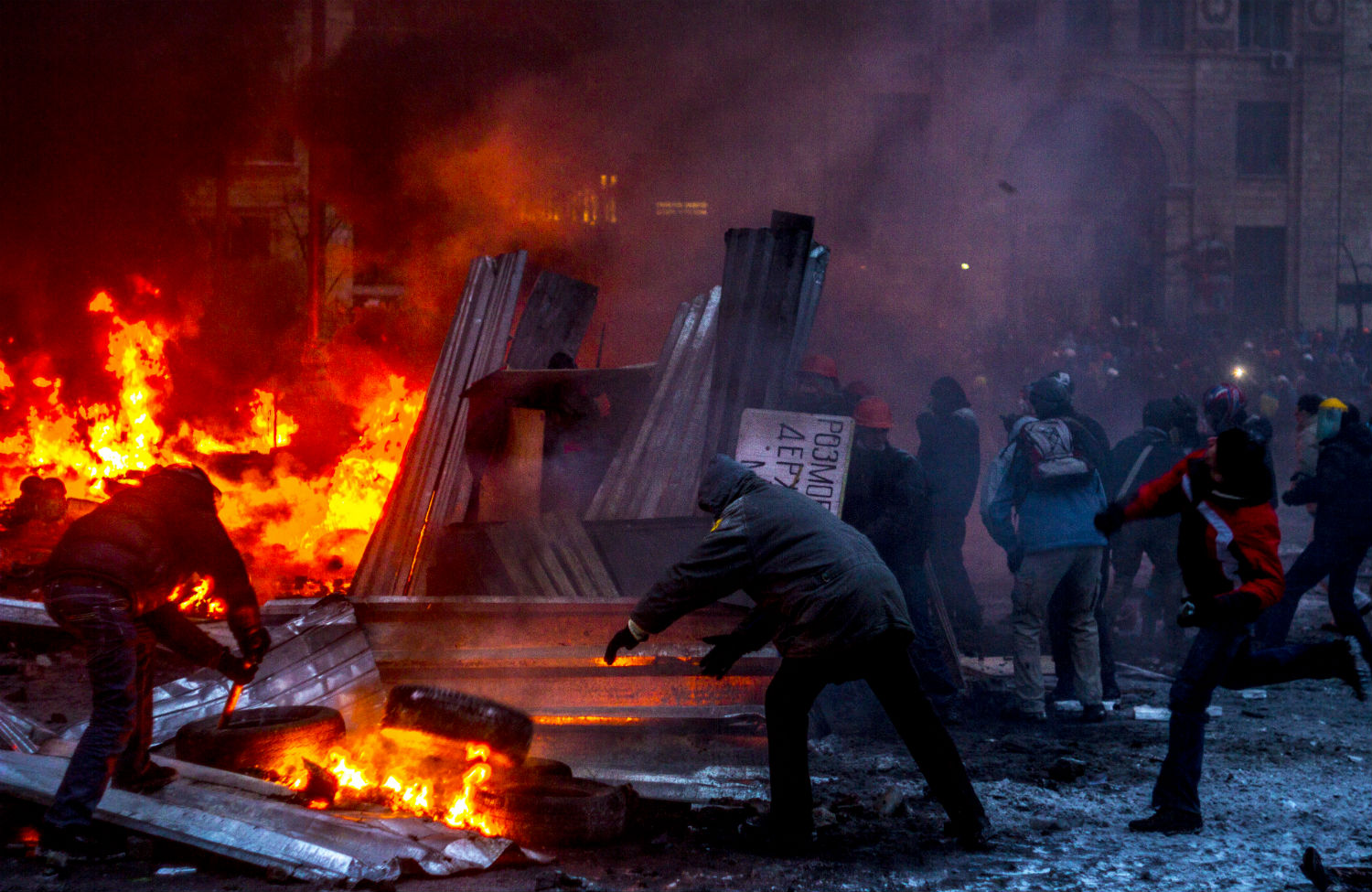 The Russian threats, bluster, troop mobilizations and pledges to throw their support to the ousted former President Viktor Yanukovych of Ukraine—who, delusional to the end, still asserts that he’s president despite a revolution in the streets that’s plain to see—are worrying, and ominous. Yanukovych, who has blood on his hands from the massacre of protesters in Kiev, will never, ever again have a role in Ukrainian politics.

And it’s also ominous that both Secretary of State John Kerry and NATO have talked about NATO’s role in Russia’s periphery yesterday. With exquisitely bad timing, while meeting the Georgia’s prime minister, Kerry said, “We stand by the Bucharest decision and all subsequent decisions that Georgia will become a member of NATO.” And NATO’s secretary-general, whose organization ought to have nothing whatsoever to say about Ukraine, said yesterday: “Ukraine is a close and long-standing partner to NATO. And NATO is a sincere friend of Ukraine. We stand ready to continue assisting Ukraine in its democratic reforms.” Needless to say, Ukraine doesn’t need NATO to help build a democracy.

But an important news analysis in The Los Angeles Times notes that Russia gave NATO advance notice of its military maneuvers near Ukraine, and it says that in the end Russia, the European Union and the United States may be able to reach an accommodation over Ukraine’s future:

Those ominous events, however, may obscure what is largely a meeting of minds among Russian President Vladimir Putin, European Union officials, the White House and more pragmatic elements of Ukraine’s new leadership.

The [military maneuvers were] apparently intended to impress on the new Kiev leadership that it should keep in mind the interests of Ukraine’s Russian-speaking minority. However, Moscow’s heads-up to the North Atlantic Treaty Organization quietly underscored the Putin administration’s repeated assurances that it has no intention of interfering in Ukraine’s domestic crisis, much less sending troops or encouraging secession.

As I reported earlier this week, apocalyptic scenarios for Ukraine remain unlikely.

Russia’s President Vladimir Putin, who played a ruthless game of chess to protect Russia’s interests there, ought to know when it’s time to admit that he’s been checkmated. The game’s over, Vlad.

Sans Russian direct interventions—that is, without Moscow’s military intervention, which would be not only hopeless but catastrophically misguided—and without Russian covert support for pro-Russian guerrilla actions, including in Crimea, there’s a chance that Ukrainians can resolve their problems without generating a US-Russian, Cold War–like crisis.

And the Obama administration and the Europeans, who apparently didn’t foresee the revolution—at the last minute, last week, they were still negotiating a deal to organize early presidential elections to resolve the political crisis—it’s time to avoid pressing their advantage. To calm the crisis, the United States ought to acknowledge right away that it has no plans, ever, to include Ukraine in NATO. That would be easier to say if Russia hadn’t decided to exacerbate the crisis by pledging support for Yanukovich and ordering military exercises along the Ukrainian border.

As The New York Times reported:

Eight hundred miles away, President Vladimir V. Putin of Russia was ordering a surprise military exercise of ground and air forces on Ukraine’s doorstep on Wednesday, adding to the tensions with Europe and the United States and underscoring his intention to keep the country in Moscow’s orbit.

Sensibly enough—but then it’s easy to be sensible when your side has come out on top—Kerry said yesterday:

We’re hoping that Russia will not see this as a sort of a continuation of the Cold War; we don’t see it that way. We do not believe this should be an East-West, Russia-United States—this is not ‘Rocky IV’.… We see this as an opportunity for Russia, the United States and others to strengthen Ukraine, help them in this transition and there’s no reason they can’t look east and west and be involved as a vital cog in the economy of all of us going forward.

That’s the ideal approach, one that Russia too ought to adopt, but so far there’s little sign that Moscow is ready to admit it’s been checkmated and move on. Were it to do so, Russia could insert itself in the various schemes being cooked up to rescue Ukraine’s collapsed economy. Already the United States is pledging a $1 billion down payment for Ukraine, and both the European Union and the IMF are readying packages. But that doesn’t mean that Russia’s own, vital economic interests in Ukraine can’t be protected, or that Russia can’t defend its legitimate interests in its neighbor—a country that is far more important to Russia than to the EU, and which has almost no interest at all for the United States.

Russia’s military movements can only backfire, and the revolt by pro-Russian forces in Crimea could easily provoke a Ukraine vs. Russia military flare-up, in which case NATO and the United States might very well get involved. In a statement not exactly couched to reduce tensions, the acting president of Ukraine, Oleksandr Turchynov, said:

I am appealing to the military leadership of the Russian Black Sea fleet…. Any military movements, the more so if they are with weapons, beyond the boundaries of this territory (the base) will be seen by us as military aggression.

He’s right, of course: it would be military aggression. Nevertheless, it’s unlikely.