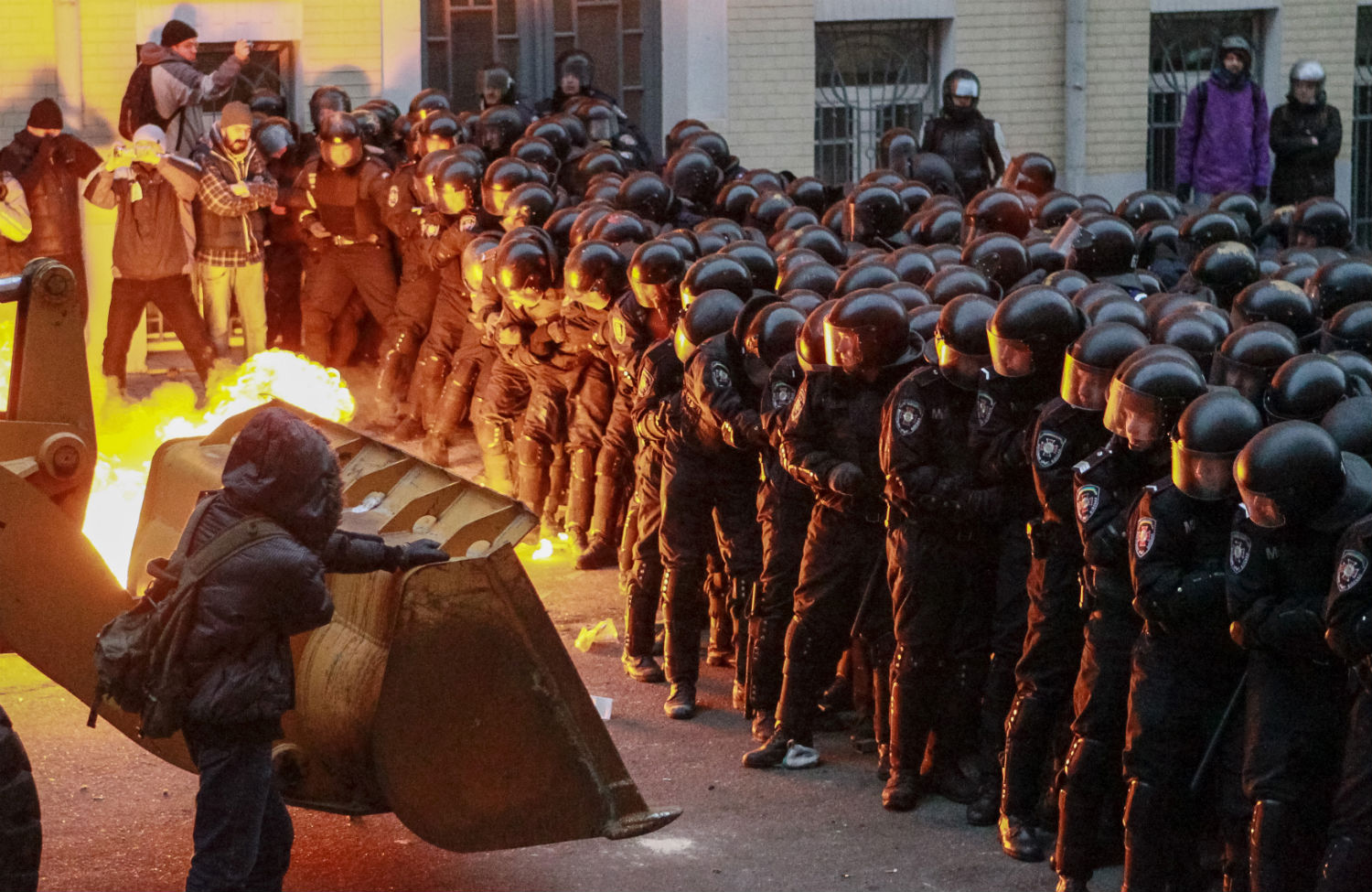 When a government that has clearly lost legitimacy and lacks popular support decides to use brutal force to maintain itself in power, there’s no going back. Like China’s government during the Tiananmen crisis—or more recently, like Egypt’s military government in Cairo, where heavily armed police killed hundreds to oust protesters from a square—the government of Ukraine is now engaged in a police and military effort to crush a long-running opposition protest that had paralyzed the capital, and the country, for weeks.

It’s an enormous, and unnecessary, tragedy.

And there’s not much the United States can do about it. Likely, there will be American and European sanctions against Ukraine now, at least directed at some of its leaders, but sanctions will simply push the country’s leaders even farther from the West, and from any accord with the European Union. In the Cold War–like struggle between the United States and Russia over Ukraine, which many Russians (including Vladimir Putin, Russia’s autocratic, czar-like leader) see as part of Russia’s sphere of influence, Moscow—which urged the Ukrainian government to crack down on protesters—may have won a round. But a bloody, shaky peace, filled with simmering hatreds, is not likely to be the final result of the ongoing crackdown in Kiev.

According to The Guardian, at least two dozen people, including police, have been killed, and hundreds wounded, in the “bloodiest night in independent Ukraine’s history.” And, says the paper, by this morning only one-third of the square had been retaken.

The Russian view, which simplifies the issue significantly, is that the protests were led by “extremists,” and that the leaders of the opposition should have condemned the occupation of the square. (The Russian media, and some officials, call the protesters “terrorists” and “insurgents,” though very little violence has occurred and there is no evidence whatsoever of an insurgency. It remains to be seen whether the two main leaders of the opposition now, Vitali Klitschko and Arseniy Yatsenyuk—who’ve been meeting with European leaders this week—will be able to sit down anytime soon, or ever, with President Viktor Yanukovich and his government. Far more likely will be an angry standoff, martial law and a breakdown in any talks.

The crisis is yet another piece of evidence that the United States has little or no ability to alter events in Ukraine—other than, perhaps, to stoke the anti-Russian fires and egg the protesters on. The recently released telephone call between two leading US diplomats, including the American ambassador in Kiev—in which Victoria Nuland, the assistant secretary of state for European and Eurasian affairs, said “Fuck the EU!”—provided a glimpse into the outright manipulation and interference by the United States in Ukrainian politics. In the end, however, their actions just underscored how little the United States can do if a government such as Ukraine’s—backed by Russia—decides to crack down and rule by force. A Russian diplomat, speaking to Russia’s RT, called the US actions in Ukraine “puppeteering.” Which, of course, Russia is very good at doing, itself.

So the Russians have made a power play, calling the US bluff. Sergey Lavrov, the Russian foreign minister, blames the entire crisis on the West. According to RT: “The responsibility for the deadly riots in Ukraine lies not with extremists alone, but also with the leaders of the Ukrainian opposition and some Western politicians, Russian Foreign Minister Sergey Lavrov has said.” The same Russian outlet, RT, adds:

Ukraine’s security service has announced it is launching a counter-terror operation. Radicals have seized over 1,500 firing arms and 100,000 bullets in the last 24 hours, the service said.

Like the Egyptian military, which suddenly found weapons caches and called its crackdown a “counterterrorism” operation.

Back in December, writing in The New York Review of Books, Timothy Snyder tried to find a way out of the crisis for Ukraine, asking in his lead sentence:

Would anyone anywhere in the world be willing to take a truncheon in the head for the sake of a trade agreement with the United States?

Of course, it wasn’t just a trade agreement, i.e., the interim deal with the EU that Ukraine had flirted with and then backed away from. And Snyder added:

The dangerous fantasy is the Russian idea that Ukraine is not really a different country, but rather a kind of Slavic younger brother. This is a legacy of the late Soviet Union and the Russification policies of the 1970s.

In any case, it’s Snyder’s concluding paragraph that stands out:

For now, all interested parties should do what they can to keep the discussion squarely on the basic issues of free trade, free speech, and freedom of assembly. The Ukrainian fantasy of geopolitics has played itself out, the Russian fantasy of Ukraine as part of its Slavic sphere of influence perhaps has not. Putin is no doubt too canny to really believe in some fairy tale of fraternal assistance. But it would be wise to make very sure.

Now we know the answer to that. At least for now.