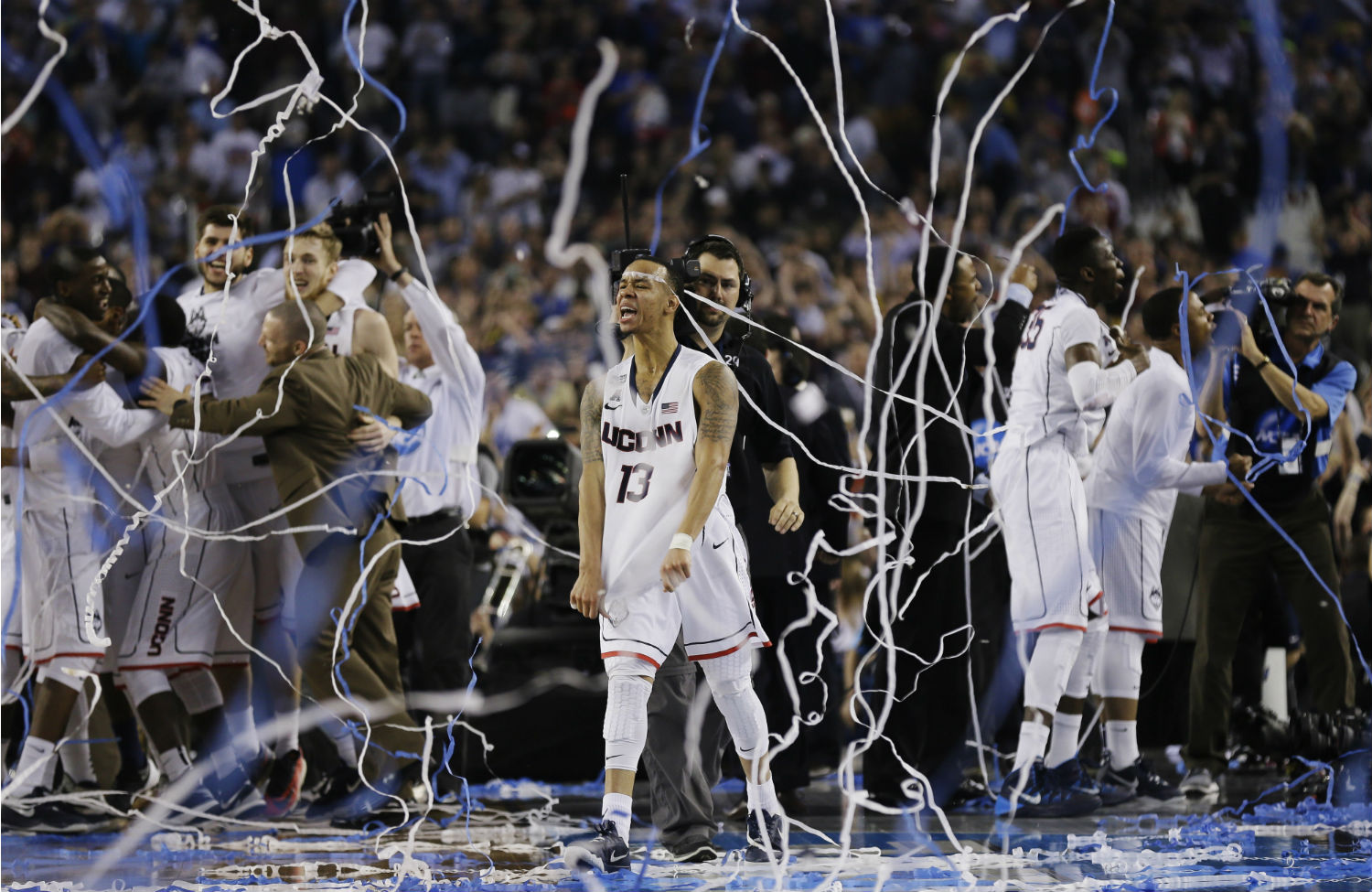 Congratulations to the University of Connecticut men’s basketball program, which won its fourth championship in the last sixteen years all while holding up a mirror to the most corrupt, amoral entity in American sports, the National Collegiate Athletic Association (NCAA). UConn just absolutely nailed a game we could call “NCAA Hunger Games Bingo” in ways that not even NCAA President Mark Emmert’s Dorian Gray, Kentucky coach John Calipari, could have accomplished.

Just look at the boxes the UConn Huskies have checked off, and keep in mind that this is a basketball program being called a “model” now that the team has won twice as many championships as any other school’s over the last two decades. Get out your Nike-swoosh adorned NCAA Bingo cards and let’s have a look at everything UConn tells us about so-called amateur student-athletics.

Have the worst graduation rate of any school in the NCAA tournament, with only 8 percent of their players (one in twelve who enrolled eight years ago) earning a diploma? Check!

Win your title after two years of tournament probation for your school’s abysmal academic efforts? Check!

Have your star player, Shabazz Napier, speak with pride about how probation motivated their efforts and say on national television at the trophy ceremony, with a figurative middle finger aimed at Mark Emmert, “This is what happens when you ban us?” Check!

Also have your star player, the aforementioned Mr. Napier, tell the world that he is so poor, “Sometimes, there’s hungry nights where I’m not able to eat, but I still gotta play up to my capabilities?” Check! (Napier even calls his team “the hungry Huskies,” and it is not clear if he means they are hungry for championships or protein.)

While Shabazz and his teammates starve, have him win the tournament’s Most Outstanding Player trophy in front of a crowd of 79,000 people paying $500 a pop for tickets, on a network shelling out $10.8 billion to watch him play? Check!

Have commentators speak repeatedly—with ears made out of the purest tin—about how “underpaid” UConn coach Kevin Ollie is since he “only” makes $1.3 million a year and will “only” receive $166,666 for winning the big game? Have them state with relief that Ollie is now in for a big raise? Check!

Now that UConn has achieved the ultimate NCAA Bingo (plus one for good measure), all you need is for the students at UConn’s Storrs campus to have an impromptu, entitled, alcohol-fueled riot and celebrate their school pride by smashing the windows of their university’s buildings and setting fires. Hey! That happened too! (Do we have to mention how different the Storrs police response would have been if, say, it were the student-athletes themselves smashing windows instead of the overwhelmingly white student fanboys?)

So let us recap: we have a team of majority African-American basketball players not getting an education and not getting paid, but generating millions of dollars for their coach and billions of dollars for the NCAA, CBS and the assorted sponsors. We have a state college suffering budget cuts and tuition hikes, that has been trashed by students thrilled that their team of unpaid mercenaries has brought them a measure of reflected glory. All the evening was missing was a war in the Middle East to get everyone truly good and frothy.

It is difficult to not recall the press conference of NCAA President Mark Emmert over the weekend who spoke out with mottle-faced passion against the mere concept that NCAA athletes should ever form unions. He does not want NCAA student-athletes having any kind of a seat at the table so they can discuss everything that is manifestly and obviously poisonous in the NCAA system of student-athletics. Emmert said that if student athletes were unionized employees, “it would blow up everything about the collegiate model of athletics.” The response to that should be two simple words: “You promise?”