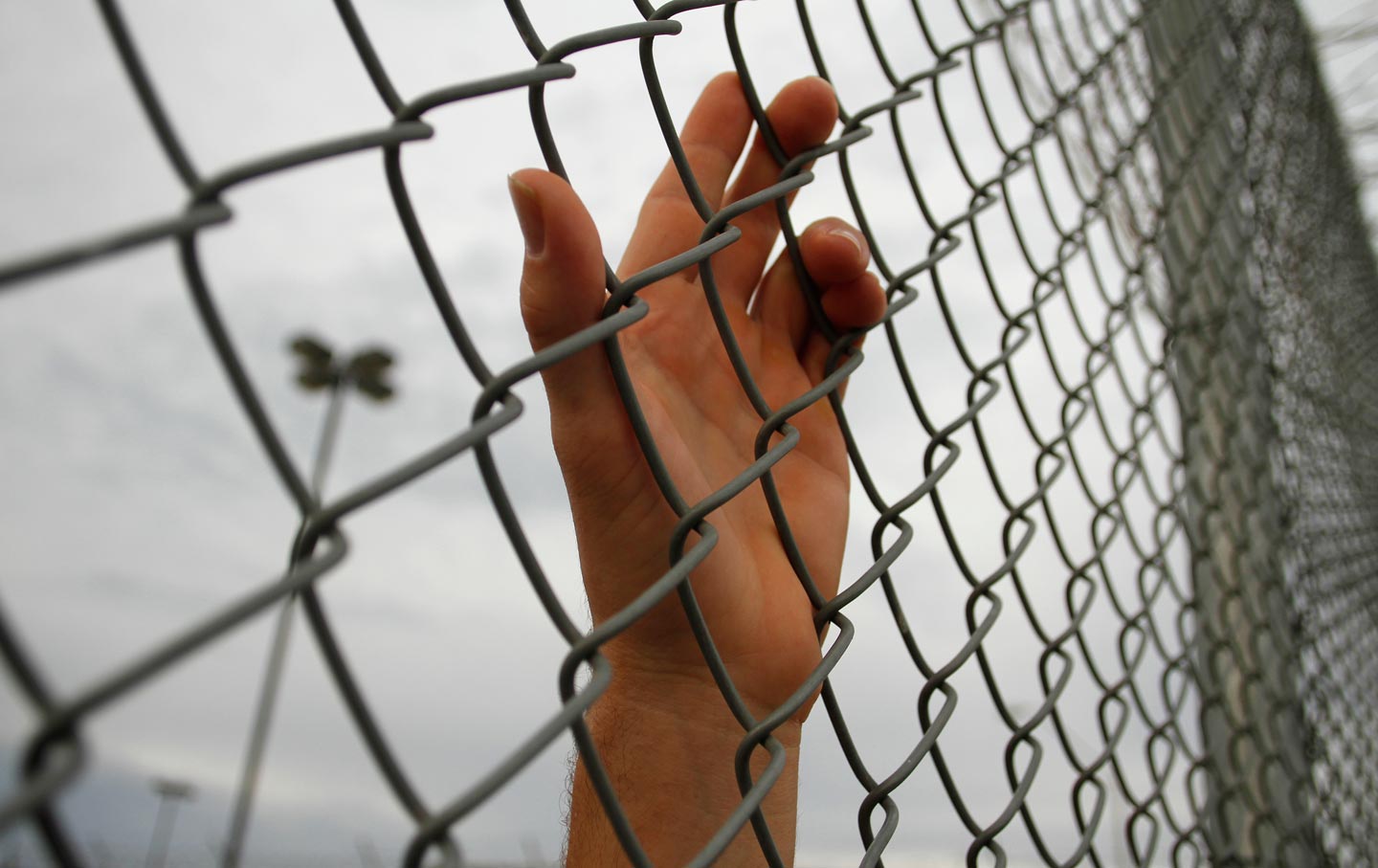 An inmate rests a hand on the fence at Maricopa County's Tent City jail in Phoenix, July 30, 2010. The controversial jail was run at the time by then-Sheriff Joe Arpaio. (Reuters / Joshua Lott)

Forget, for the moment, that Donald Trump’s Friday-night pardon of former Arizona sheriff Joe Arpaio could trigger a constitutional crisis. Put aside the conjecture that Arpaio’s pardon is just the first of many he’ll make, particularly by the time Robert Mueller gets done with him. Let’s return, for just a second, to words Trump uttered when he began his journey toward the presidency.

You know the words I’m talking about. You can almost recite them by heart. “When Mexico sends its people, they’re not sending their best,” Trump said on June 15, 2015, after his descent down his golden escalator. “They’re sending people that have lots of problems, and they’re bringing those problems with us. They’re bringing drugs. They’re bringing crime. They’re rapists. And some, I assume, are good people.”

We know now that this is standard Trump positioning: vilifying Mexican immigrants (or, transgender people, people of color, anti-racist protesters, as the case may be) with a dash of charitable equivocation. That speech was the preview of every immigration policy that Trump has pursued since taking office: his expansion of of the nation’s deportation machine, his aggressive policing of immigrant communities, and his desire to drive as many immigrants out of the United States as possible while driving down the numbers of new immigrants who may enter the country. By now, we know that what Trump revealed about himself then was not merely a penchant for provocation, or arch performance art. It was straight-up bigotry.

There’s a direct line between that first speech and Trump’s pardon of Arpaio, the 85-year-old sheriff whom Maricopa County voters ousted in November. Arpaio was convicted last month of violating a 2011 court order that forbade him from stopping and detaining people solely on the basis of their suspected immigration status. Arpaio had ignored the court order, a federal judge found. The court order itself stemmed from a civil lawsuit charging that Arpaio systematically racially profiled Latinos. The lawsuit, which Arpaio lost, offered yet more confirmation of the findings of a 2011 Department of Justice report that also found that in the course of traffic stops, workplace raids, and neighborhood sweeps, the Maricopa County Sheriff’s Office unlawfully stopped, detained, and arrested Latinos and retaliated against those who criticized the agency’s practices. 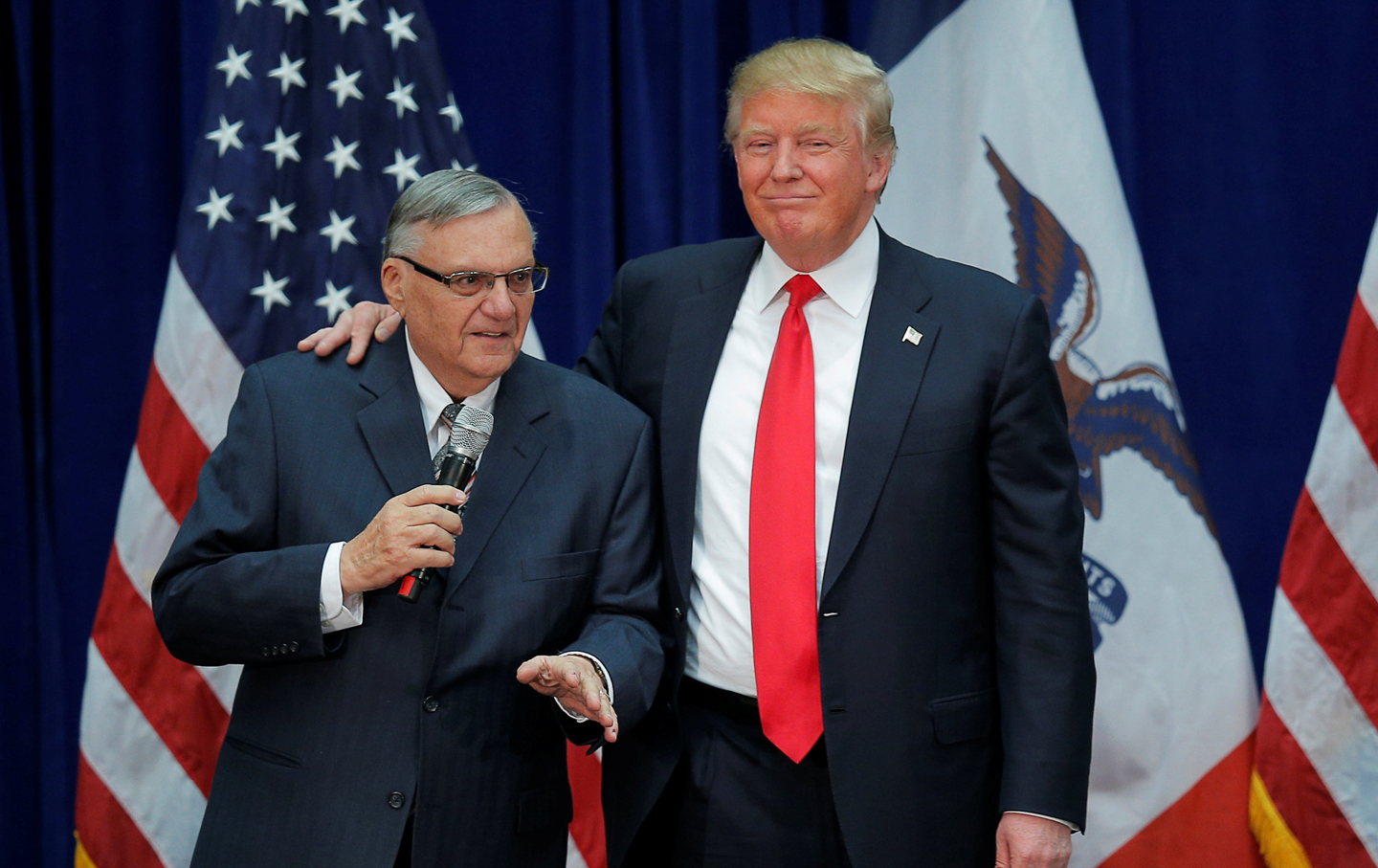 President Trump Should Be Impeached for Pardoning Joe Arpaio

When Arpaio stumped for Trump in Las Vegas last February right before the Nevada caucuses, he boasted that Maricopa County had just hit the half a million mark for inmates held in the tent city that he’d built in 1993. The outdoor jail (to say nothing of the pink underwear, cartoonish striped prison uniforms, and the chain-gang parades he forced on inmates) was classic Arpaio—a publicity stunt designed to grab headlines, while maximizing the humiliation of inmates. He once asked a reporter if they wanted to visit “the tent where all the Mexicans are.” And Arpaio didn’t just terrorize the Latino community with unlawful arrests and detentions. Those who were or were suspected of being undocumented were handed off to Customs and Border Protection.

The White House statement announcing the pardon praised Arpaio for his dedication to his policing agenda. “Arpaio’s life and career, which began at the age of 18 when he enlisted in the military after the outbreak of the Korean War, exemplify selfless public service,” the statement reads. “Throughout his time as Sheriff, Arpaio continued his life’s work of protecting the public from the sources of crime and illegal immigration. Sheriff Joe Arpaio is now eighty-five years old, and after more than fifty years of admirable service to our Nation, he is worthy candidate for a Presidential pardon.”

There is no subtext here. There is no deep reading necessary. Trump’s pardon of Arpaio is the recognition that the two are not merely allies but kindred spirits. Surely, Trump has offered, as many warned when Trump first floated the pardon, an endorsement of a lawman’s racism. But it’s even more basic than that. It’s the inner workings of the American social and political system laid bare. Trump’s pardon of Arpaio is his equivocation about Charlottesville is his insistence that all immigrants are homicidal gangbangers is his fanning the flames of white voters’ racial resentment. It’s white supremacy.

White supremacy is not just men in hoods leaving burning crosses on black people’s lawns, or white men in khakis and polos bearing tiki torches, for that matter. It’s not just bringing a picnic lunch to attend a lynching. It’s more than Richard Spencer and the linguistic contortions required to rebrand racist ideology for the 21st century.

Trump’s pardon of Arpaio is his equivocation about Charlottesville is his insistence that all immigrants are homicidal gangbangers is his fanning the flames of white voters’ racial resentment. It’s white supremacy.

White supremacy is as bland, and as deadly, as the idea that white people ought to be and remain in control of social, and cultural, and political life. It is the idea that the law exists to serve white people and white interests alone. White supremacy has been the organizing principle of the United States since its creation. It is Donald Trump’s insistence that when he can’t bend the law to his needs, he is above it. It is its own nod to Arpaio’s recognition of the same.

That’s why I can’t get too warmed up over the panic about the constitutional crisis brewing. Trump clearly does not care about interfering with the administration of justice—Arpaio wasn’t set to be sentenced until October—but he doesn’t really have to either. As president he has absolute power to pardon any person charged of a federal crime. He reminded the country of this via Twitter over a month ago. The system, in this case, is working exactly as it was designed to work.