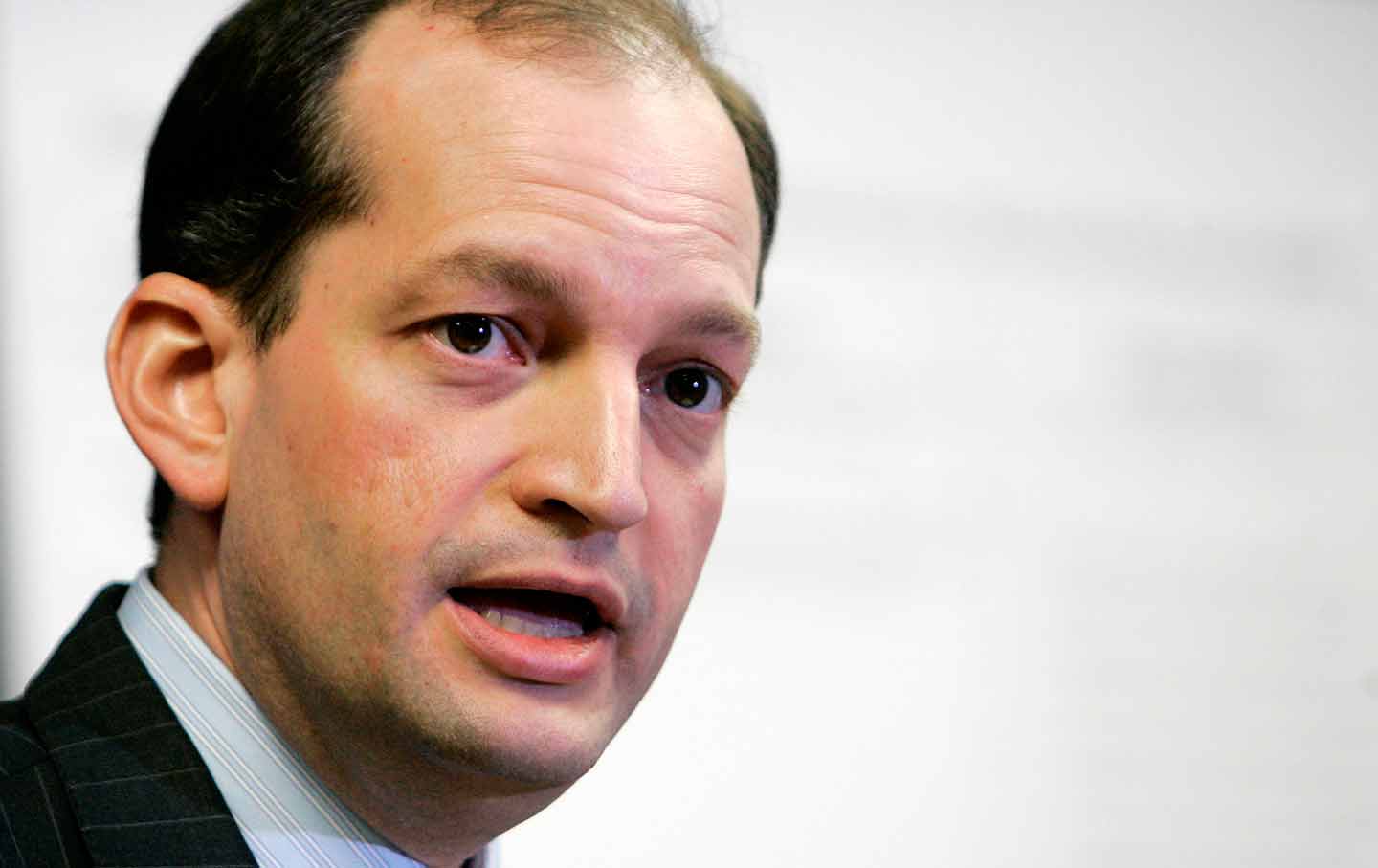 Overshadowed by the high-octane wars over the Affordable Care Act and Supreme Court nominee Neil Gorsuch, the confirmation of Labor Secretary nominee Alexander Acosta is cruising toward a March 30 Senate committee vote with little fanfare. Yet Acosta’s acquiescence to President Trump’s labor agenda holds frightful if unheralded consequences for America’s workers, millions of them Trump supporters.

By numerous accounts, Acosta’s 8-month tenure at the NLRB displayed a mix of modest partisanship and occasional political independence. Although most of his decisions sided with the Republican majority on the five-member board, Democratic NLRB member Wilma Liebman characterizes Acosta as “independent, intelligent and not knee-jerk anti-union or anti-worker, or pro-business,” according to Politico.

However, as head of Bush’s Civil Rights Division, Acosta found himself in some trouble after he failed to stop his own deputy, Bradley S. Schlozman, from engaging in politically motivated hiring of unqualified attorneys, an inspector general report found. The report concluded that while Acosta claimed ignorance of this federal law-breaking under his watch, senior staff had alerted him to problems. As Senator Elizabeth Warren described in a letter to Acosta, “you failed to stop these egregious abuses. There is no ambiguity in the Inspector General’s conclusion that you ‘did not sufficiently supervise’ your own deputy.” Warren further skewered Acosta, adding: “Your management of the Civil Rights Division created a corrosive environment for the career attorneys dedicated to protecting the civil rights of all Americans.”

Nonetheless, in contrast to Puzder, Acosta has so far sailed smoothly toward confirmation as a more qualified, less blatantly anti-worker choice tainted by fewer scandals. Perhaps due to outrage fatigue (or ­a post-Puzder “bigotry of low expectations,” to borrow a phrase from President George W. Bush) Acosta’s hearings have sparked minimal controversy. According to the Bureau of National Affairs, six of the 23 members of the Senate Committee on Health, Education, Labor, and Pensions (HELP) “either didn’t speak or didn’t show, and most of the others fled the room without taking advantage of a second round of questions.”

Labor unions have also been far less critical, with a few unions—including the International Association of Firefighters, the International Union of Operating Engineers, and the Laborers’ International Union of North America (LIUNA)—openly endorsing Acosta. LIUNA General President Terry O’Sullivan heaped praise on Acosta for his “impressive background with strong credentials and an impeccable reputation,” adding, “I look forward to working with Mr. Acosta to protect and make better the lives of working men and women across America.”

But those who would give Acosta a pass risk making a serious mistake. Despite comparatively few political skeletons in his closet, he remains a threat, in good part because of his avowed willingness to implement President Trump’s blatantly anti-worker labor agenda. A few otherwise mundane words uttered by Acosta may carry great (and grave) significance: Cabinet members, he reminded Senators, “work for the president, and we will all ultimately follow his direction unless we feel that we can’t.”

That may sound reasonable—but what does it mean for America’s workers if Acosta follows Trump’s direction? While Acosta is more qualified and less scandal-plagued than Andy Puzder, his comfort with Trump’s plans to radically diminish worker protections could harm millions of American workers.

“What we saw is he wasn’t willing to take a stand” on key labor policy issues, said a senior staffer on the Senate HELP Committee. But, the aide noted, Acosta’s consistent deference to Trump “says a lot about where he stands. Someone who says I defer to my boss on core values, that’s not what you want to see in a person in this position…He has demonstrated a record of doing exactly the opposite of what you would want in a position like this.”

So what is the agenda Acosta will be charged with carrying out? Courtesy of policy “blueprints” from the Heritage Foundation—a top influence on the Trump administration—Trump’s proposed labor rollback is vast, and directly refutes his so-called “populist” appeal.

If Acosta follows his boss’s direction, he will roll back Obama rules extending overtime pay for roughly 13 million lower-income workers. He’ll work with Congress to repeal prevailing-wage protections—meaning less economic security—for federal contract workers, many of whom will be building bridges and roads if Trump passes an infrastructure plan. A compliant Acosta would also eliminate job training and employment programs for low-income seniors, as well as for unemployed and displaced workers across the United States. And he would diminish an already enfeebled Occupational Safety and Health Administration (OSHA)—putting millions of workers at greater risk of accident and injury on the job.

Acosta also deferred to Trump on his rollback of the Obama-era fiduciary rule aimed at protecting workers from receiving improper investment advice. The rule, slated to launch this April but now ensnarled in a six-month Trump administration “review,” would require retiree investment plan advisors to disclose any conflicts of interest.

When Senator Warren pressed Acosta on the rule, the nominee deferred to Trump’s authority, saying he prefers “following executive actions from the President, who will be my boss.” Warren let him have it: “You have dodged every one of my questions…If you can’t give me straight answers on your views on this, not hide behind an executive order, but your views on this, then I don’t have any confidence you’re the right person for this job.”

During the hearing, Acosta repeatedly voiced general agreement with principles such as equal pay for women (“to the extent that that pay gap is there, it shouldn’t be,” he said). Yet, under questioning from Senator Patty Murray he refused to commit to retaining the Women’s Bureau—a small but vocal $12 million Labor Department division “exclusively concerned with serving and promoting the interests of women in the workforce,” as the agency puts it. Acosta dodged, saying President Trump and Congress will have final say on that and other potential Labor Department cutbacks. Notably, when Acosta touted the Women’s Bureau, he emphasized its role in aiding women-owned businesses, not its work on equal pay and women’s poverty.

In a letter to Acosta, Warren laid out her concerns. Near the top, she highlighted Trump’s budget proposal slashing 21 percent of the Labor Department budget: “These draconian cuts will hobble your ability to run core parts of the agency, including the divisions that investigate and enforce the federal health and safety standards that keep workers safe on the job and the federal wage and hour laws that ensure that workers are paid fairly.”

Grilled by Democrats about Trump’s labor rollback plans, Acosta insisted, “Good jobs should also be safe jobs.” But if Acosta fails to push back on Trump’s huge proposed cutbacks in Labor Department funding and enforcement, that pledge seems dubious at best.

For an up-close look at what these cuts mean on the ground, take Trump’s proposed elimination of OSHA training grants. For the relatively miserly sum of nearly $11 million a year, these grants provide safety training for workers in high-risk jobs—such as construction workers, meatpackers, and immigrant workers in many industries—in states across the country, including Trump-supporting Michigan, Nebraska, Texas, and Florida.

These OSHA grants have trained more than 2.1 million workers in dangerous jobs since 1978, “lead[ing] to better protection that prevents injuries and fatalities,” says Debbie Berkowitz, who served as senior policy advisor and Chief of Staff at OSHA from 2009 to 2015. The trainings reach “workers who have never been trained before with vital workplace safety training that they use to make sure they are protected from job dangers—such as loggers, roofers, workers in landscaping and shipbuilding,” adds Berkowitz, now senior fellow at the National Employment Law Project.

What this means on the ground is that Asian immigrant women with limited English get training to prevent harmful slips and falls in food service, home health care, janitorial, and other jobs. It means that largely Spanish-speaking workers in high-hazard industries such as construction and moving get trained to prevent musculoskeletal injuries. And it means small business employers and workers building communication towers get trained to avoid perilous falls.

Worker advocates aren’t the only ones touting the program’s importance. When Republicans pushed similar cuts (though not outright elimination) in 2015, Kevin Cannon of the Associated General Contractors of America (AGC) argued that Congress should instead “increase the funding for this program.” As Safety and Health reported then, the AGC, along with other construction and infrastructure contractors, has received numerous grants “covering a wide range of topics, including excavation safety, fall protection and, most recently, highway work zone safety.”

But even if Congress trims back Trump’s injurious labor cuts—hardly guaranteed given similar plans advocated by GOP legislators—many of Trump’s working-class and middle-class votes will be far less safe on the job.

As it is, OSHA is limping along with fewer inspectors than it had in 1992—barely enough to examine each American workplace once every 145 years.

Whether Congress agrees to eliminate this and other programs slated for abolition in Trump’s budget blueprint, even smaller cuts will curtail vital enforcement efforts by the labor department, warns Chris Lu, former deputy labor secretary for Obama. “There is a pretty stark contrast between what [Trump] promised to do and what he has actually done. If you cut OSHA inspectors or roll back workplace safety regulation, you’re hurting working-class voters,” he says. “I don’t believe Trump’s working-class support voted for unsafe workplaces.”

As the Senate HELP Committee votes this Thursday and Acosta’s confirmation moves on, as expected, to the full Senate, his compliance with Trump’s radical labor rollback holds dangerous implications for workers across America. Trump-voting workers may want to take notice: the man poised to become the next labor secretary is primed to implement a profoundly anti-worker agenda that will harm millions of workers across America.