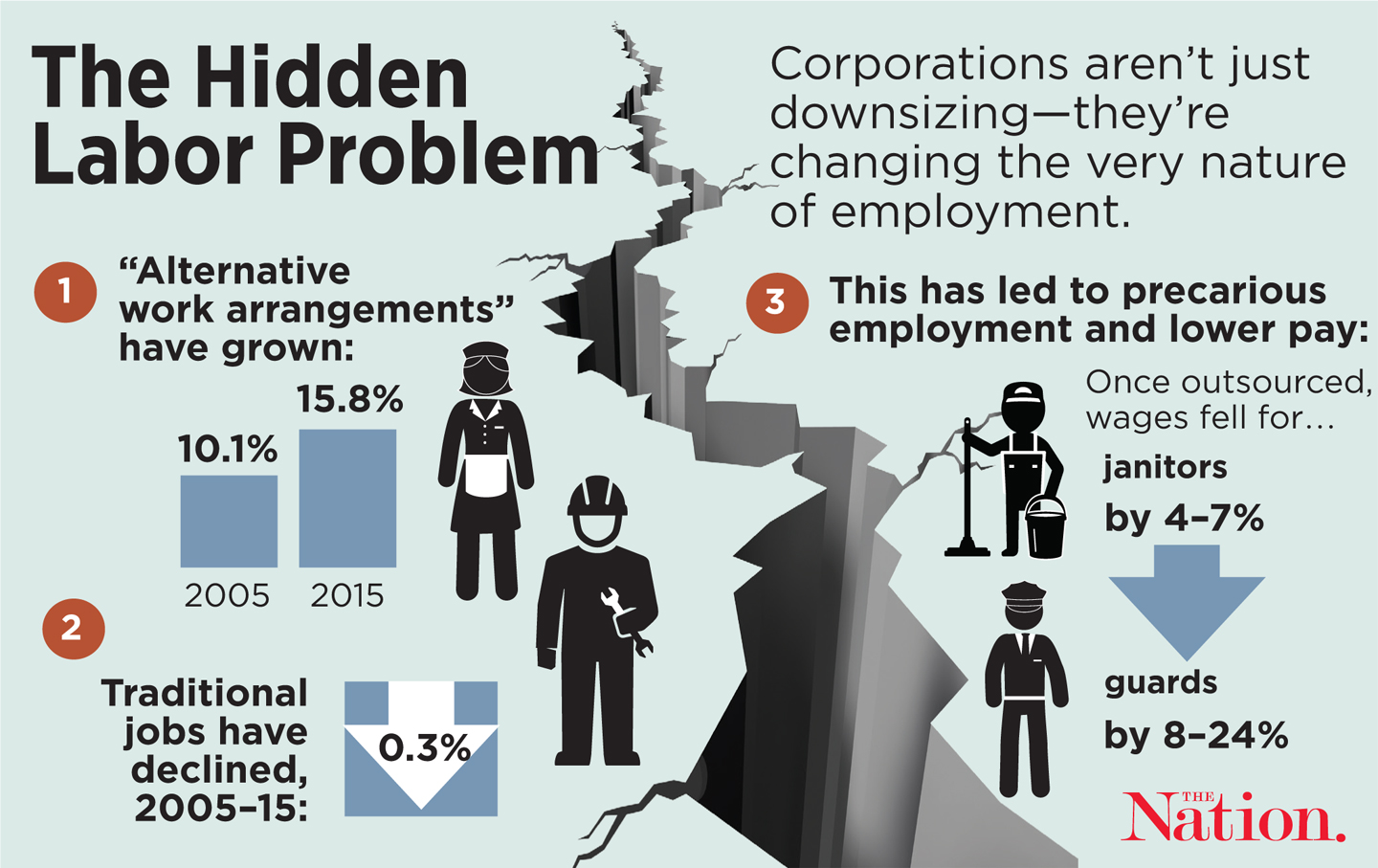 The Rise and Nature of Alternative Work Arrangements in the United States, 1995–2015 (Katz and Krueger). Does Outsourcing Reduce Wages in the Low Wage Service Occupations? (2008, Dube and Kaplan). Infographic by Tracy Loeffelholz Dunn / The Nation

The left will fight Donald Trump’s plans for remaking the economy in the interests of finance, energy extraction, and CEOs. But the left also needs to figure out its own approach to the economy—one that connects with workers who feel left behind and delivers in a way that Trump’s economics will not. 1

One useful tool in this regard is The Fissured Workplace: Why Work Became So Bad for So Many and What Can Be Done to Improve It by David Weil. This underappreciated book describes the “fissured workplace”: the result of corporations increasingly distributing activities through an extensive network of contracting, outsourcing, franchising, and ownership. Workers are less likely to work for the corporation that ultimately profits from their labor; instead, they work for a loose network of middlemen or as independent contractors. Their work is still monitored and controlled as closely as any other office worker, but they lose the protections of labor law and the ability to fully enjoy the rewards of economic growth. 2

Instead of working for the company that profits from their labor, people work for a loose network of middlemen.

This is the new reality for workers in the 21st century. Elites and professionals are less likely to experience it, as they tend to cluster at the top of the new corporate hierarchy. Research by the economists Lawrence Katz and Alan Krueger shows that “alternative work arrangements”—a term that covers temporary, on-call, contract, and independent workers—increased 5 percentage points in the past 10 years, while the number of people employed in traditional jobs declined slightly. 3

Outsourcing weakens labor’s bargaining power. In 2008, researchers Arindrajit Dube and Ethan Kaplan found that in the past, wages had fallen between 4 and 7 percent for janitors and 8 and 24 percent for security guards once those jobs were outsourced to subcontractors— a useful comparison point for many other fields.  4

Weil’s book also connects what’s happening among the elite with the experience of everyday workers. Consider their respective experiences of a stagnating economy: CEOs gain paydays while shedding workers. Private equity profits while using arcane ownership laws to run businesses into the ground, stripping them of their resources. The power of finance to strip a business down to a single core and then build a monopoly means you can have increasing profits even as workers don’t benefit. In a country where people tend to blame themselves before blaming capitalism or bosses for their economic plight, liberals have struggled to explain what’s happening and to link this trend of fissure to the everyday lived experience of working people. Yet this fissuring is the logical cause and consequence of our runaway inequality. 5

The idea of fissure also bridges the divide between manufacturing and service workers. Trump says he’ll bring back middle-class factory jobs. Liberals argue that they can make low-wage service work more secure. It’s not surprising that many people, nostalgic for dependable employment, gambled on Trump rather than choosing to fight for a better service industry. But both manufacturing and service workers have seen their work relationship evaporate in a legal mist, and both find it harder to organize, build solidarity, and demand better wages and fewer hours. 6

Talking in terms of fissure would also help improve the way we talk about the economy overall. The fact that these changes in labor are based in law and rules means that they can’t simply be attributed to forces beyond everyone’s control. This abstraction, which is often the problem when liberals talk about inequality and globalization, always leaves workers feeling like their issues are being ignored. Workers’ lived experience of fissure is the transformation of steady jobs into a precarious, competitive nightmare.  7

Worse, for many liberals the ideal is for all workers to be self-employed entrepreneurs. For most workers, however, being an “entrepreneur” just means that your employer fired you and rehired you as a contractor. As Trump adviser Steve Bannon noted, Democrats “were talking to these people with companies with a $9 billion market cap employing nine people. It’s not reality. They lost sight of what the world is about.” Trump’s own hubris and his party will prevent him from capitalizing on this insight; there’s no reason Democrats should miss it, too.8