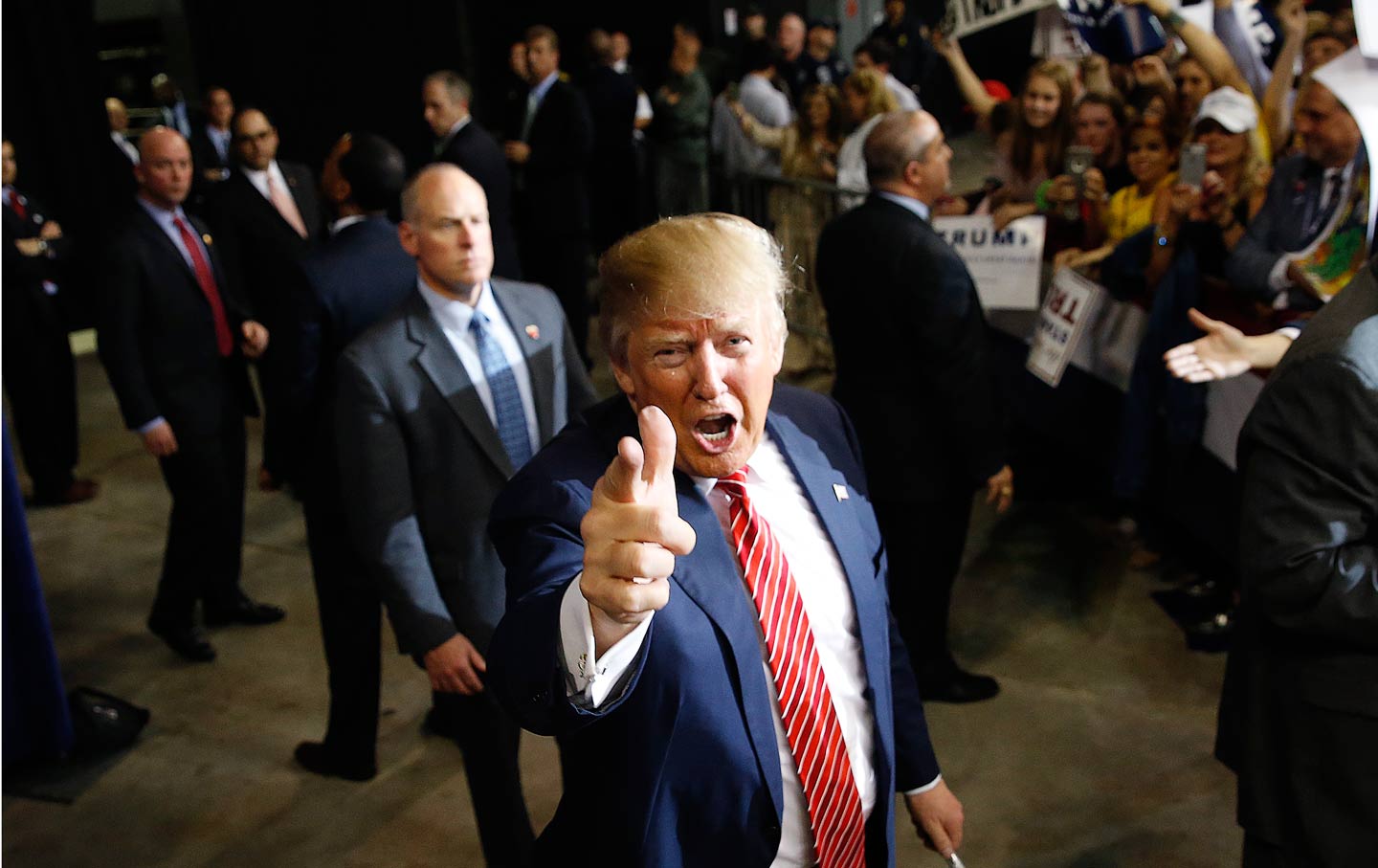 With a cascade of leaks, a war with the FBI, and the announcement of the appointment of a special counsel to investigate allegations of wrongdoing, Donald Trump’s grotesque presidency now hangs by a thread. By the hour, it seems, the possibility of impeachment, of him being declared incompetent to govern—or, at the very least, of his own party bringing irresistible pressure on him to resign—grows.1

And as that pressure grows, so balloons the peril of our moment. For the 18 months that Trump has been center-stage politically, he has shown an extraordinary commitment to demagoguery, to flirtations with mob violence, to peddling conspiracy theories, to military grandstanding to distract attention from his problems, and to race-and-religion-baiting whenever the mood suits. He has demonstrated utter contempt for the separation of powers, extraordinary hostility to the free press, and a disconcerting fondness for dictators the world over. He has also shown himself to be brittle and thin-skinned, relishing the ability to use his vast platform to attack those he deems to be his personal “enemies,” but unable to tolerate disagreement or dissent when it is directed at him.2

Why do I rehash all these known traits now? Because—cornered, humiliated, and increasingly in legal peril—Trump will likely resort to all of the tricks of the demagogue as he fights for his survival. This is a man who has never played fair in his life, who takes pleasure in inflicting hurt on those weaker than himself, and who believes that ideals, or simply basic decency, are mere annoyances in the one game that matters: the game of power.3

The fanatics in his administration could gin up an emergency in order to clamp down on dissenters and muzzle the press.

For months, progressives have worried about a “Reichstag fire” moment: about the possibility that Trump, Bannon, Miller, and the other fanatics who people this administration could gin up an emergency scenario that would allow them to clamp down on dissenters, muzzle the press, and neutralize the courts and domestic political opponents. We have worried about emergency decrees that would be used to justify enemies lists, databases that would monitor people by their religion, and so on. And yet, for all of his bluster, for all of his middle-of-the-night, id-revealing tweets, for all of his childish, semiliterate boasting about his unprecedented popularity, speaking skills, and understanding of complex policy issues, Trump has not yet unleashed his mob quite as fully as he might.4

Now he is, to put it mildly, on the ropes. His policy priorities are in a shambles, the courts are blocking his immigration “reforms,” and day by day he is being subjected to a regimen of leaks that are the political equivalent of death by a thousand cuts.5

Men like Trump do not fade gently into their political night. Rather, with all nuance sacrificed in pursuit of their senescent need for the spotlight, they scrabble and scratch, lash out and fight. With no self-limiting or self-correcting moral gyroscope, they go down whatever paths they believe offer them the best chance of survival.6

Economists routinely talk about virtuous circles of economic well-being, whereby a series of events occurs, each of which in turn magnifies and accelerates economic growth. With Trump, the unstable commander in chief of the most powerful and most heavily nuclear-armed nation on earth, we’re likely to see an entirely unvirtuous, and increasingly destructive circle, with each event magnifying and accelerating both his authoritarian and his dishonest instincts.8

Yes, it’s a cause for celebration that this miserable, cruel man is on the ropes. But let’s not celebrate prematurely. There is much work to be done still to neutralize his demagogic hold over the country; and while that work is being done, we must stay more vigilant than ever against his increasingly destructive actions. He is a soulless, amoral thug, a con artist now fighting for his life. I do not doubt that, in the end, he will be destroyed—that all of those craven, fair-weather friends, those men and women in the GOP whom he embarrassed and humiliated, mocked and deliberately hurt throughout the primary process but who embraced him upon his electoral success, will turn on him as soon as they believe they can so do without destroying their own political careers. I do not doubt that he will be derided in the history books as an unmitigated catastrophe for the country. But while those fair-weather friends are still girding for their fight, and the historians are still whetting their pens, Trump, our wounded despot, remains a clear and present danger.9