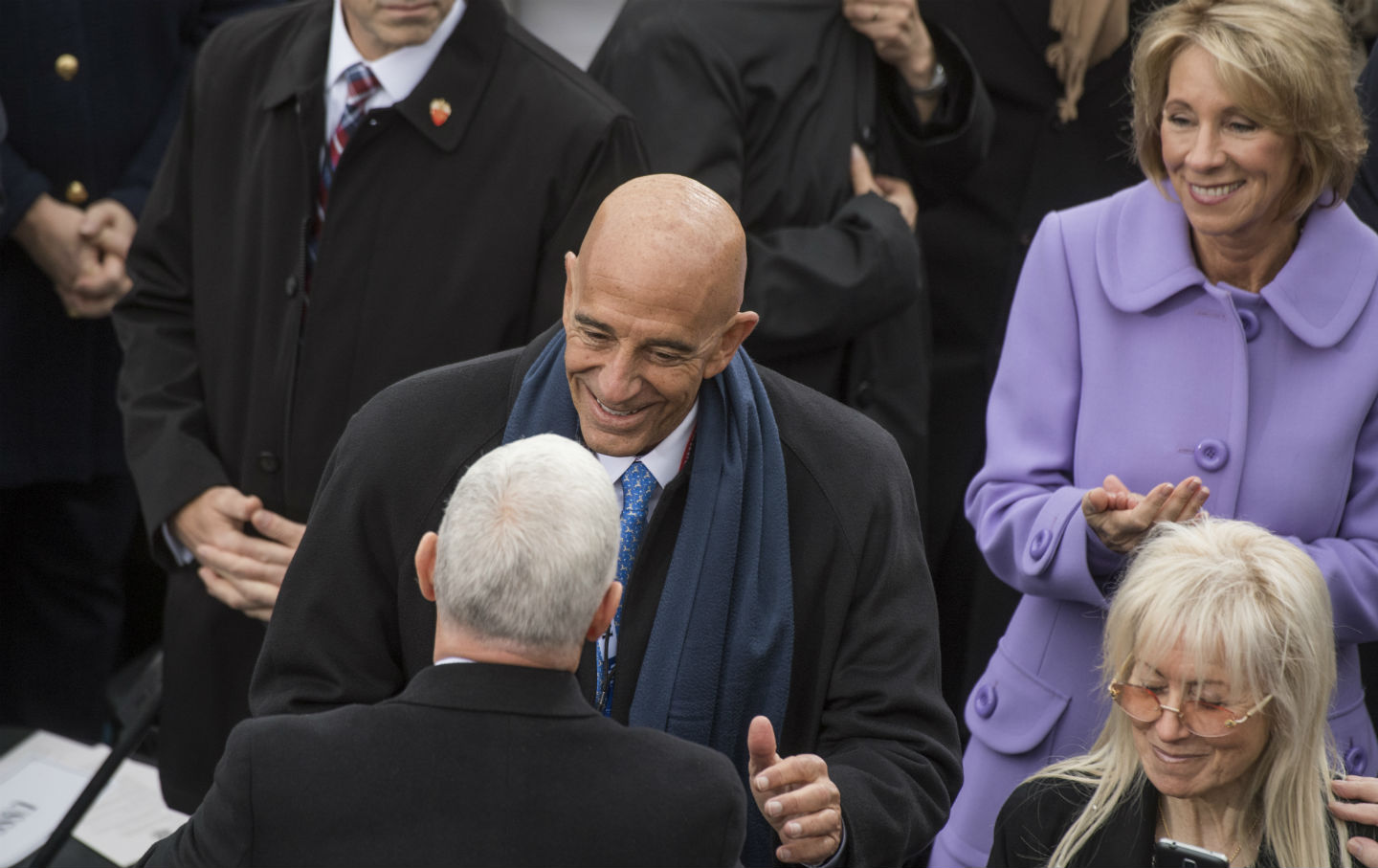 Thomas Barrack, a close confidant of President Donald Trump’s, has walked away from the rental-housing empire he built following the housing bust, cashing out his ownership stake in a move likely to make him hundreds of millions of dollars.

The move came late Friday, one day after Reveal, the online organ of the Center for Investigative Reporting, published an exposé on the company he founded. According to a filing with the Securities and Exchange Commission, Barrack sold all his stock in Colony Starwood Homes and resigned his position as co-chairman of its Board of Trustees.

But the phenomenon Barrack started—where tens of thousands of single-family homes are bundled into giant mortgage-backed securities, creating new incentives to skimp on maintenance and maximize rents—will outlive his ownership.

Barrack, who often says he likes to “befriend the bewildered,” has made a career out of profiting off other people’s pain. He began buying houses in 2012, telling an audience in Chicago that the mass purchases of homes previously foreclosed on was “the greatest thing I’ve ever done.”

Current tenants, however, say the company piles on onerous fees and forces them to live with chronic leaks, mold, mites, and even snake infestations. In one county in the Atlanta area, the company filed eviction notices against one-third of its tenants, according to a report by the Federal Reserve Bank of Atlanta.

“We’re just little people in his world,” Makita Edwards, 25, said of Barrack. Two weeks after her family moved into a Colony Starwood Home in suburban Atlanta, she said, a ceiling fan fell on her bed.

Barrack first signaled his intention to sell in a filing with the SEC on Wednesday, a week after Reveal contacted the company for comment and five days after Reveal talked to Barrack by phone, telling him directly that it planned to publish an investigation into poor conditions and mass evictions by Colony.

Barrack hung up when told that many of the dozens of homes Reveal visited were “falling apart.” Representatives from Colony Starwood Homes also declined to be interviewed for the story and provided a statement that did not address questions about Barrack’s leadership of the firm.

In an e-mail Friday, company spokesman Jason Chudoba declined to discuss what triggered the sale, saying the company “could never comment on why a shareholder had decided to sell or purchase shares.” Barrack’s personal spokesman did not reply to an e-mailed inquiry.

Barrack had been reelected co-chairman of the company’s board of trustees on May 15.

Under the terms of deals outlined in the SEC filings, Barrack and his investment firm, Colony NorthStar, both said they planned to sell all 11 million shares they together own of company stock, which are currently valued at about $400 million.

As of 7 pm Eastern Friday, only Barrack had completed the deal; Colony NorthStar had not yet reported its divestment through an SEC filing.