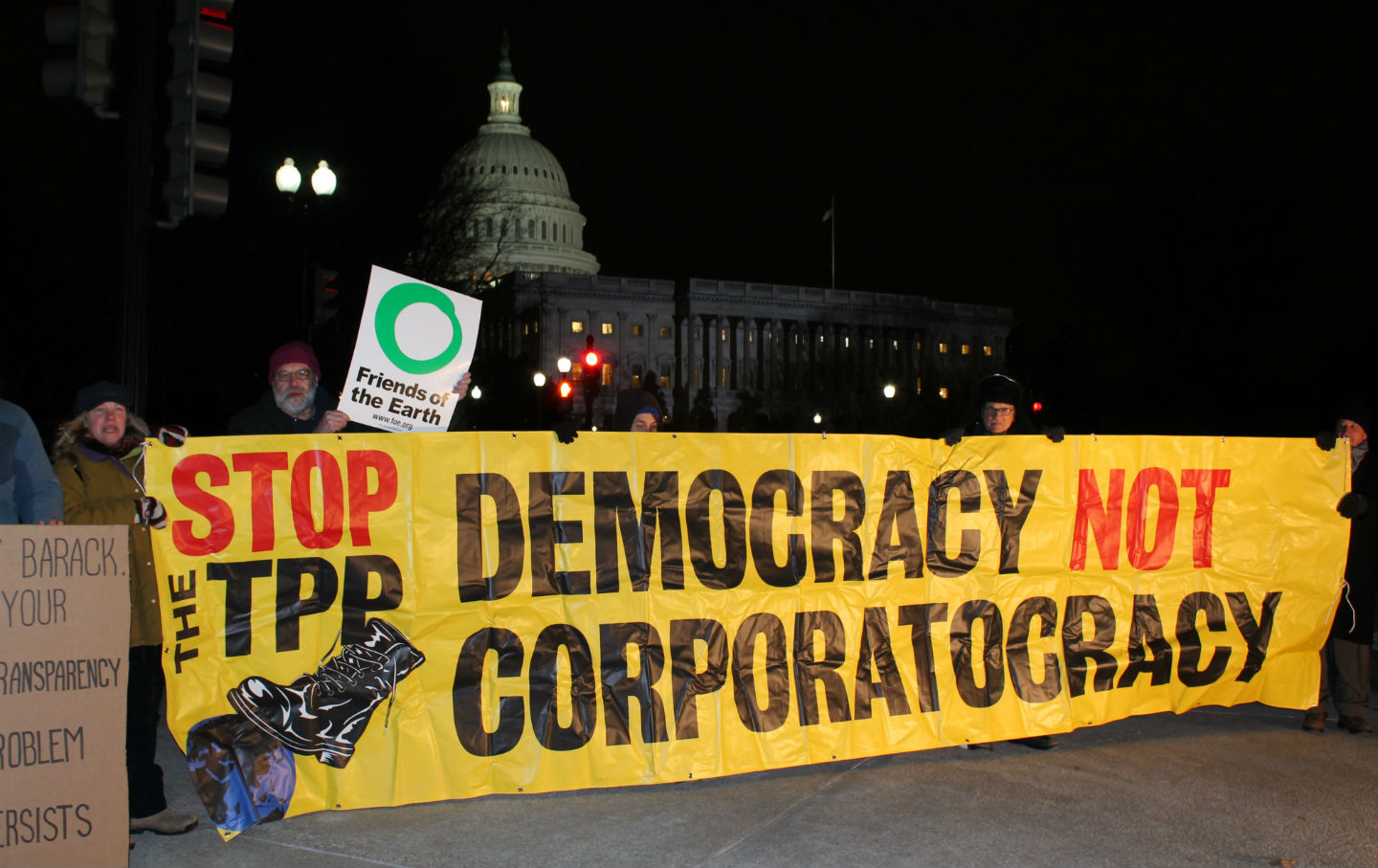 Protesters gather outside of the Capitol building with a message against the TPP. (Stop FastTrack / CC BY 2.0)

The way to begin any discussion of the Trans-Pacific Partnership is with a simple question: Where does this sweeping global trade deal rest power—with the people and their elected representatives in the United States and 11 other Pacific Rim countries, or with the multinational corporations that have been empowered by every previous trade deal of this kind?

The answer, if history is any indication, and if reports on the the secretive agreement are accurate, is that the power will rest with the corporations.

“The deal announced [Monday] is the result of negotiations between corporate interests and trade representatives, which ignored the voices of working families in all twelve countries,” announced Congressional Progressive Caucus co-chairs Raúl M. Grijalva (D-AZ) and Keith Ellison (D-MN). “While details are still emerging, we are concerned the Trans-Pacific Partnership (TPP) will destroy jobs and depress wages, threaten health and safety standards, harm our air, land and water, and make it harder for patients to access life-saving drugs.”

Grijalva and Ellison were right to cite the economic and environmental concerns. But they were even more right to focus on concerns about how the TPP fails to “protect nationhood rights by prohibiting special corporate courts through Investor State Dispute Settlement (ISDS) provisions.” No matter what claims are made regarding side deals and “progressive” language, a trade agreement that allows secretive “dispute resolution” along lines that overwhelmingly favor multinational corporations undermines rather than strengthens worker rights and environmental protections.

There is a lot that is wrong with the “free-trade” model embraced by Presidents Clinton, Bush, and Obama. But nothing is so wrong as the little-covered but hugely important threat to democracy itself in the form of Investor State Dispute Settlement (ISDS) provisions, which Public Citizen says “formally prioritize corporate rights over the right of governments to regulate and the sovereign right of nations to govern their own affairs.”

As Communications Workers of America President Chris Shelton warned Monday after the announcement of the agreement, the inclusion of ISDS provisions represents “a corporate dream but a nightmare for those of us on Main Street.”

The TPP lets “multi-national corporations rig the system to pad their profits at our expense.” –Bernie Sanders

A New York Times report published Monday explained that the TPP agreement “would overhaul special tribunals that handle trade disputes between businesses and participating nations” in response to “widespread criticisms that the Investor-State Dispute Settlement panels favor businesses and interfere with nations’ efforts to pass rules safeguarding public health and safety.” The “overhaul” involves what the Times referred to as “a code of conduct [that] would govern lawyers selected for arbitration panels.” There’s also a “carve out” to address abuses by “Big Tobacco.” That’s fine; but the problem goes far beyond lawyers, and far beyond the wrongdoing of one industry. The problem goes to the heart of the matter of whether special tribunals, which exist to advance free trade, will have the power to help multinational corporations circumvent or undermine local laws.

The dispute-resolution provisions could cost taxpayers dearly, explained Lori Wallach, the director and founder of Public Citizen’s Global Trade Watch. “[The] TPP would expand the ‘investor-state’ dispute settlement system that allows foreign firms operating here to drag the U.S. government before extrajudicial tribunals staffed by private corporate lawyers to demand unlimited taxpayer compensation if they think our environmental, health or other laws violate their TPP rights and limit their ‘expected future profits,’” wrote Wallach. “Tribunals have ordered governments to pay $3.6 billion to corporations for toxics, energy, water and other policies under past U.S. agreements. These involved developing nations with few U.S. investors here, so we avoided greater liability. But with 9,000 corporations from TPP nations established here, the TPP would double U.S. exposure to these attacks. That alone would provide 9,000 reasons to oppose TPP.”

Vermont Senator Bernie Sanders was blunt about the fundamental flaw in the pact. The TPP, said the Democratic presidential contender, lets “multinational corporations rig the system to pad their profits at our expense.”

These legitimate concerns are unlikely to be addressed in a realistic manner by advocates for the agreement—or in most media coverage of the TPP debate.

Supporters of trade deals of this kind have learned their lessons. They promoted the North America Free Trade Agreement (NAFTA), the General Agreement on Tariffs and Trade (GATT), the extension of “Most Favored Nation” trading status to China, the US-Korea Free Trade Agreement, and so many others as windfalls for workers in the United States and abroad. They promised prosperity and stability. They promised that the free market would sort out any and all concerns about the rights of workers, farmers and consumers, about the environment, about human rights.

The promises were never kept.

The people realized this. Labor, farm, environmental, and human-rights groups have over the past two decades built mass movements in opposition to corporate-dominated “free trade” and in favor of people-centered “fair trade.”

So the corporate CEOs and the politicians and their amen corner in the media got smarter. They started arguing that new free-trade agreements would be vehicles to care for the workers, the farmers, the consumers, the environment, and human rights. They adopted the language of liberal idealism. So it was that, when a final TPP agreement was announced Monday, the White House hailed it as a “high-standard trade agreement that levels the playing field for American workers and American businesses, supporting more Made in America exports and higher-paying American jobs.”

But as Nobel Prize–winning economist Joseph Stiglitz and Roosevelt Institute senior economist Adam S. Hersh warned on Monday as negotiators were finalizing the agreement that “sober analysis is warranted. The biggest regional trade and investment agreement in history is not what it seems.”

“You will hear much about the importance of the TPP for ‘free trade,’” wrote the economists, who monitored the final negotiations on the agreement. “The reality is that this is an agreement to manage its members’ trade and investment relations—and to do so on behalf of each country’s most powerful business lobbies.”

The details of any trade agreement are complex. They demand strict scrutiny. That’s the only way to get beyond the spin that officials always peddle when the deals are being rushed from the negotiating stage to the approval stage—in the United States, both the House and Senate must vote for the deal before it goes into effect. That’s why AFL-CIO President Richard Trumka called Monday for the administration to release the text of the agreement immediately and urged legislators “to exercise great caution in evaluating the TPP.”

“As we’ve said, rushing through a bad deal will not bring economic stability to working families, nor will it bring confidence that our priorities count as much as those of global corporations,” explained Trumka.

Echoing the call for immediate release of the text was US Senator Tammy Baldwin, D-Wisconsin, who bluntly declared, “This deal was hatched in secret behind closed doors so I look forward reviewing it and seeing if it’s another unfair trade deal that stacks the deck against Wisconsin workers.”

Transparency is step one.

Step two is to focus on the mechanisms that will undermine transparency—and accountability—if the TPP includes corporate-friendly provisions for investor-state dispute settlement.

Congress will have a chance to vote on the TPP. There will be immense pressure from corporate lobbies and the White House to simply say “yes.” There will be immense spin. But the core issue of whether corporations can be effectively regulated and held to account comes down to the ISDS question.

“Under these investor-state dispute settlement (ISDS) systems, foreign investors gain new rights to sue national governments in binding private arbitration for regulations they see as diminishing the expected profitability of their investments,” explain economists Stiglitz and Hersh. “International corporate interests tout ISDS as necessary to protect property rights where the rule of law and credible courts are lacking. But that argument is nonsense. The U.S. is seeking the same mechanism in a similar mega-deal with the European Union, the Transatlantic Trade and Investment Partnership, even though there is little question about the quality of Europe’s legal and judicial systems. To be sure, investors—wherever they call home—deserve protection from expropriation or discriminatory regulations. But ISDS goes much further: The obligation to compensate investors for losses of expected profits can and has been applied even where rules are nondiscriminatory and profits are made from causing public harm.”

The bottom line is as it has always been: A trade agreement that rests power with multinational corporations, rather than with the people and their elected representatives, is a bad deal.