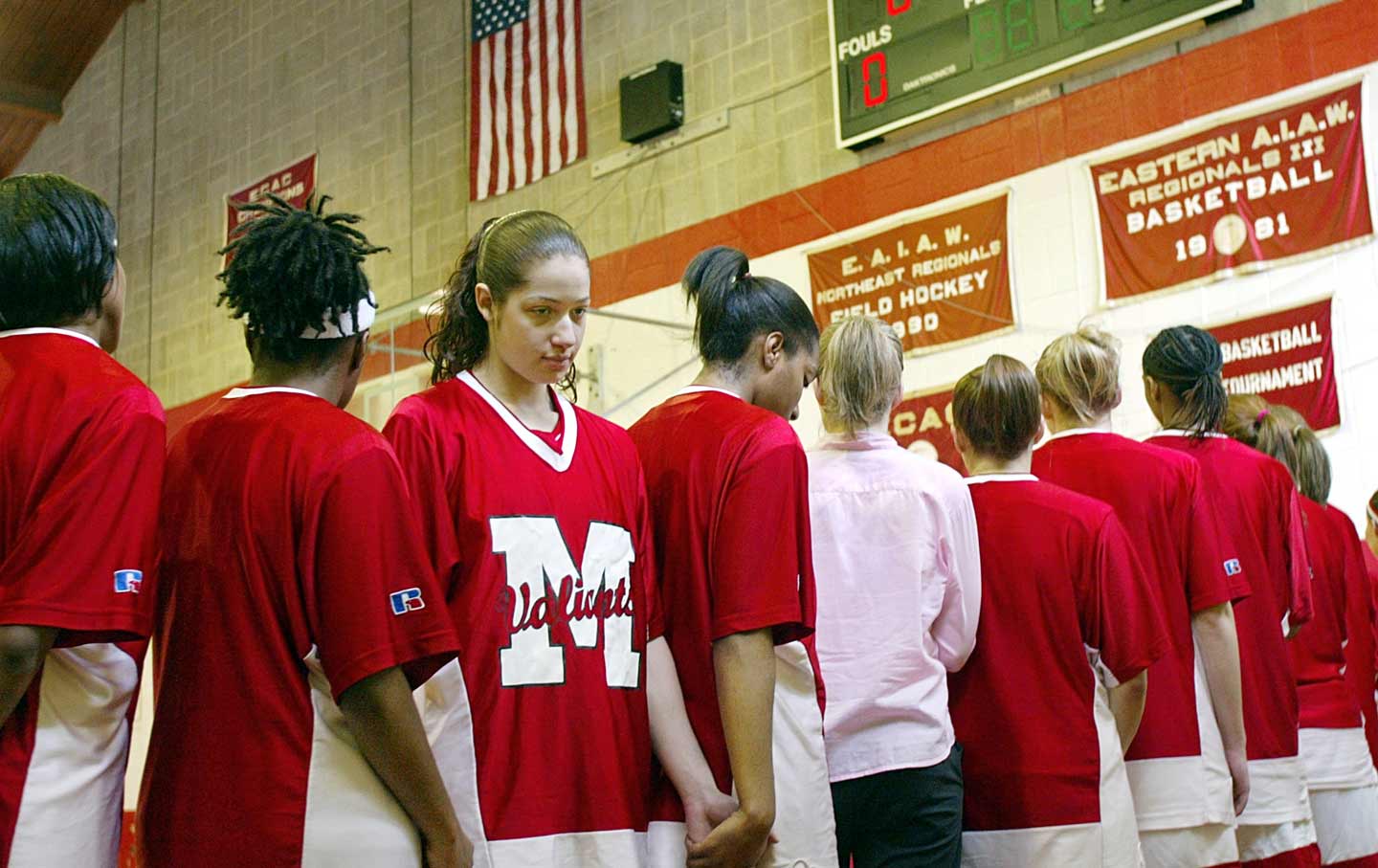 Toni Smith (third from left) turning away from the flag during the national anthem before a February 23, 2003, game at Manhattanville College in Purchase, New York. (AP Photo / Stuart Ramson)

On Friday night, San Francisco 49ers quarterback Colin Kaepernick made the decision that he would not stand for the national anthem before his team’s preseason game against the Green Bay Packers. Afterward, he made a lengthy statement to NFL media, the heart of it being, “I am not going to stand up to show pride in a flag for a country that oppresses Black people and people of color.”

Both Kaepernick’s words and deeds had a familiar ring for me. They recalled another moment of athlete activism and the national anthem. But it didn’t happen in the NFL, and it wasn’t the action of someone possessing wealth or fame. It was an unlikely protest, at a moment when the hard work of political dissent was unheard of on the field of play.

The year was 2003 at the start of the Iraq war. The scene was a small Division III school called Manhattanville College in Purchase, New York, and the political actor was a senior forward on the women’s basketball team named Toni Smith. In an atmosphere thick with jingoistic fervor, Smith made the decision to turn her back on the flag during the national anthem.

In those relatively primitive internet days, the story still managed to go viral and the outrage directed at Toni Smith was volcanic. The webpage of the liberal arts college had 2 million hits. Threats of violence were sent to the school and were palpable in the stands. Even though this was all before social media—which has amplified every threat and created a virtual white hood for the 21st century bigot—there was an effort to bury Toni Smith for the crime of practicing dissent. Yet still she stood strong, explaining her actions by saying:

“A lot of people blindly stand up and salute the flag, but I feel that blindly facing the flag hurts more people. There are a lot of inequities in this country, and these are issues that needed to be acknowledged. The rich are getting richer and the poor are getting poorer, and our priorities are elsewhere.”

She broke it down further to me in an interview back then by saying, “I’m from a mixed racial and ethnic background. My mom is Jewish, and my dad is Black, white and Cherokee. I was learning about the prison industrial complex and the wars against Native Americans…. This flag represents the slaughter of our ancestors.”

Today her name is Toni Smith-Thompson. She lives in New York City and works for the New York Civil Liberties Union. I had to get in touch with her to ask what she thought about Kaepernick’s actions. She emailed me the following. Her comments are sharp and worth a read and reread.

For years I have wondered how I would’ve weathered the backlash from my protest in the age of social media. Now, I am watching it happen. Colin Kaepernick has a vastly greater platform than I did, which will make his protest more visible, more impactful and more dangerous. I am beyond proud of his conviction and hope sports fans who cheered him on for his athletic skills will stand by him still and affirm that we don’t check our freedoms in the locker room. For us activists, Colin will need our support and solidarity. He is using his platform to stand up to oppression, joining a small but growing number of athletes to do so. We should rise to the occasion, not just for him but for us as well.

Smith also said, “Corporations have long understood the power of athletes to sell their brand, and pay heftily for it. But Colin is not asking for compensation to sell social justice; in fact, he will likely pay for it. He’s not only standing up to oppression of people of color, he’s standing up to corporate censorship of athletes. Both sports fans and social justice activists alike should crowd-source his message and drive it into as many US homes as possible, for freedom is never free and Colin just made a down payment.”

Here’s hoping that Toni Smith-Thompson is able to communicate directly with Colin Kaepernick in the days ahead. There are few people who have walked the path he is choosing to take. Kaepernick has the worst of the sports commentariat and hordes of social media scolds shouting in his ear about all he is about to lose. Toni Smith-Thompson is one of the few who can tell him what he stands to gain.