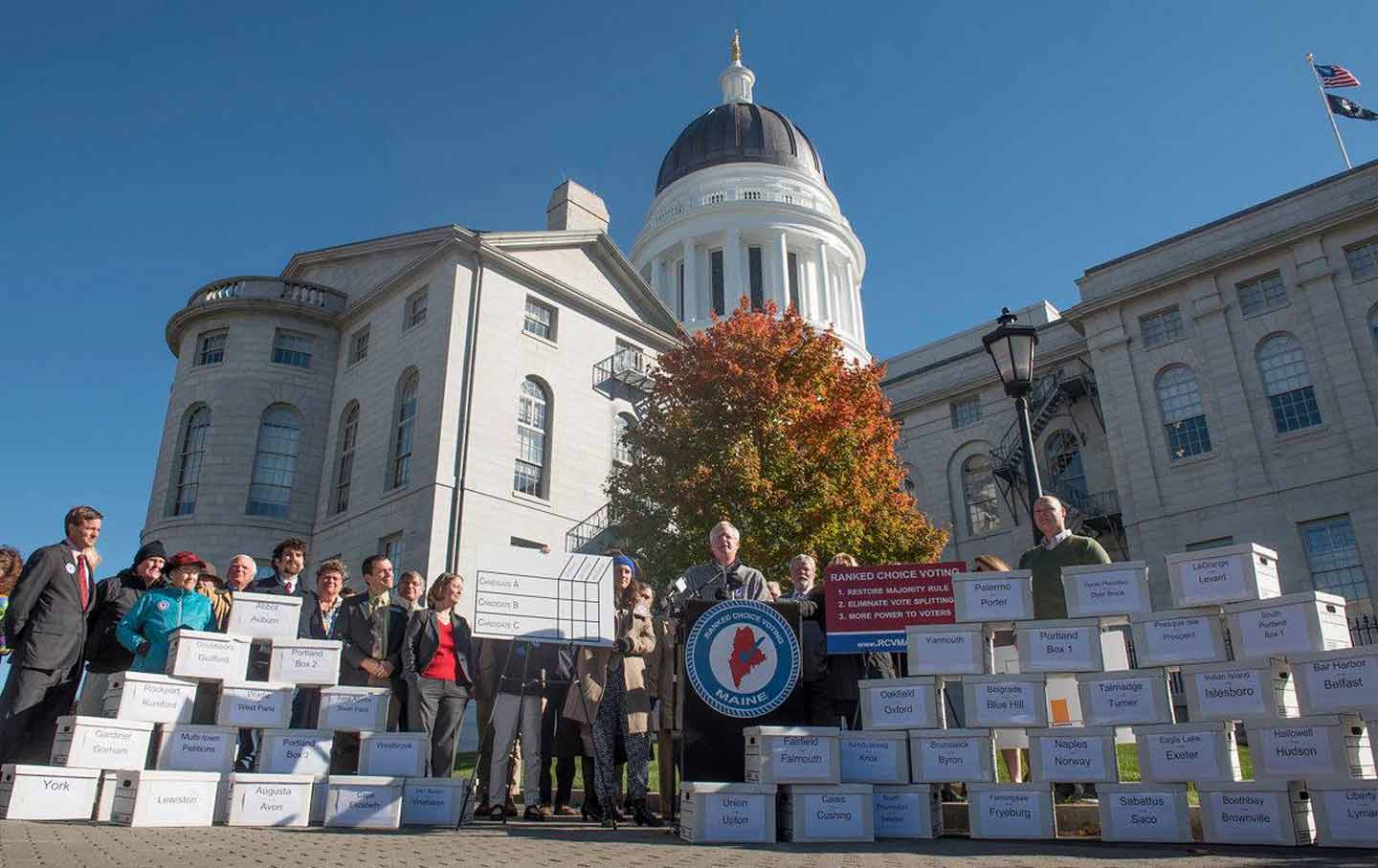 Volunteers deliver over 70,000 signatures to the Secretary of State’s Office in Augusta to place the citizen initiative for ranked choice voting on the November 2016 ballot. (Facebook / The Committee for Ranked Choice Voting)

Apart from that, though, the two-party system doesn’t get much love. Lots of people complain about it, but nobody ever seems to succeed in doing something about it. Attempts to break out of it via third parties eventually trail off into disappointment and futility. Even its defenders typically sound more resigned than enthusiastic. In its unvarying Democrats-vs.-Republicans iteration, it’s been around since the Lincoln administration. We’re stuck with it, goes the received wisdom, so suck it up and live with it. It’s not going anywhere.

News flash: That may be about to change, starting on November 8, in Maine. And you know what they say: “As Maine goes…”

Can the Working Families Party Break the Dem-GOP Duopoly?

Up in the easternmost state of the Union, an initiative on the November ballot, Question 5, would establish something called ranked-choice voting (RCV) for governor and both houses of the State Legislature. That’s important. It would do the same for primaries as well as for general elections. That’s important, too. But what makes Question 5 of truly national significance is that it would also apply to Maine’s United States senators and its two members of the House of Representatives in Washington. If Question 5 passes, it will be what Joe Biden would call (when he knows there’s a hot mic in the vicinity, that is) a very big deal.

I’ll get to RCV in a moment. First, a caution: The two-party system is not a malevolent conspiracy. It’s not an elite-generated “duopoly” whose designers set out to limit choice, suppress innovative ideas, and marginalize candidates and parties that threaten the comfortable (for some) status quo. It’s not even a system per se. It’s a side effect of a system. The real system is simply the set of electoral rules and customs bequeathed to us from the primitive political technology of powdered-wig days. The two-party pattern is a logical, almost inevitable, maybe even desirable consequence of two main features of that technology: (a) single-member districts, which are inherently winner-take-all, as are elections for executive offices; and (b) plurality elections, otherwise known as first-past-the-post, under which the candidate with the largest vote total wins even if a majority of voters would rather have somebody else. When there are more than two non-negligible parties contending for a single office, one common result is ideological fratricide—the notorious spoiler effect. By voting for the party or candidate you like best, you may help elect the one you like least. Another consequence is to diminish the chances that the outcome will more or less reflect the wishes of a majority. Given these realities, natural selection took its course and, by 1828, gave us roughly what we’ve had ever since: a two-party “system.”

Question 5 leaves feature (a) untouched. But it takes a chain saw to feature (b).

You may already know about ranked-choice voting, also known as instant-runoff voting, but it’s surprising how many well-informed people don’t. It’s pretty simple. Instead of voting for one of three or four or five or a dozen candidates, you rank as many as you wish in your personal order of preference. If one of them gets a majority of first choices, boom: He or she wins outright. If not, the second choices of voters whose first choice was the last-place candidate become those voters’ first choices. Still no majority? The process continues till someone goes over 50 percent.

It would be enough if all ranked-choice voting did was to get rid of the spoiler effect and its lamentable perversities (case in point: Florida, 2000). But the salutary side effects of this system of casting and counting votes go well beyond that. RCV opens up elections, primary and general alike, to a broader, more diverse range of candidates, ideas, and, yes, parties. Because it gives candidates a powerful incentive to be the second (or third or fourth, if the field is big enough) choice of their rivals’ first-preference supporters, it discourages incivility in general, and scorched-earth, zero-sum negative campaigning in particular. By the same token, it incentivizes good manners and a willingness to entertain the possibility of compromise. It guarantees that the ultimate winner will always be someone who’s at least acceptable, however grudgingly, to a majority—and it never yields a winner whom the majority simply cannot abide. It empowers voters to deliver a more nuanced message and allows candidates—who, if the counting goes to more than one round, will know where the votes that put them over the top came from—to receive one.

Maine, not coincidentally, is currently the nation’s most conspicuous example of the perils of first-past-the-post. The Pine Tree State is groaning under the misrule of one Paul LePage, whose tenure as governor has been an uninterrupted tsunami of outrages, substantive and rhetorical. (Earlier this year, the governor declared that the state’s drug dealers are “guys with the name D-Money, Smoothie, Shifty, these type of guys. They come from Connecticut and New York, they come up here, they sell their heroin, then they go back home. Incidentally, half the time they impregnate a young white girl before they leave.” When a Democratic legislator demurred, LePage left him a voice-mail message calling him a “son of a bitch socialist cocksucker,” adding, “I want you to record this and make it public because I am after you.”) How did such a creature get to be governor in the first place? He did it, Trumpishly, by taking 38 percent of the vote in a seven-candidate Republican primary—and then taking 38 percent again in the general, with the rest split mainly between a liberal-leaning Democrat and a somewhat less liberal-leaning independent.

There are related factors that make Maine fertile ground for RCV. The winners of nine of Maine’s last 11 governors’ races were elected with less than a majority. Maine has more registered independents than either Republicans or Democrats. LePage notwithstanding, Maine has a long history of moderate, good-government Republicanism, from Margaret Chase Smith and William Cohen to Olympia Snowe and Susan Collins. One of the US Senate’s two independents is Maine’s former independent governor Angus King, who, like Bernie Sanders, caucuses with the Democrats. And many Mainers are already familiar with how RCV works. The state’s largest city, Portland, is among the dozen or so American municipalities that already use this transformative system to elect their mayors.

As November 8 nears, Question 5’s chances look reasonably good. LePage and the Trumpian rump that loves him are against it, of course, but there has been little organized opposition. On the Yes side, the umbrella Committee for Ranked Choice Voting (rcvmaine.com) has brought together a formidable coalition of Democratic, Republican, Libertarian, Green, and independent politicians as well as business leaders and civic organizations, including, most prominently, the League of Women Voters. A mid-September poll by the University of New Hampshire for the Portland Press Herald showed a 48–29 lead for Yes, with 23 percent undecided. But success is by no means assured. Undecided voters typically break against ballot initiatives, especially ones they don’t fully understand. Also, questions 1 through 4 are all liberal hobbyhorses: marijuana legalization, a surtax on high incomes, background checks for gun transfers, and a higher minimum wage. By the time even some non-LePage conservatives get to Question 5 (the order was decided by lot), they might just go for No on everything.

But if Maine’s answer to Question 5 is Yes, ranked-choice voting for US senators and representatives is likely to spread to other states. The state-by-state approach has been a seldom-recognized template for electoral reform in our federal system. Well before the 17th and 19th constitutional amendments were ratified, many states were already electing their senators by popular vote and women were already voting, including for president, in nearly half the country, mostly the western half. This time, with any luck, the pioneering laboratory of democracy will be Down East.