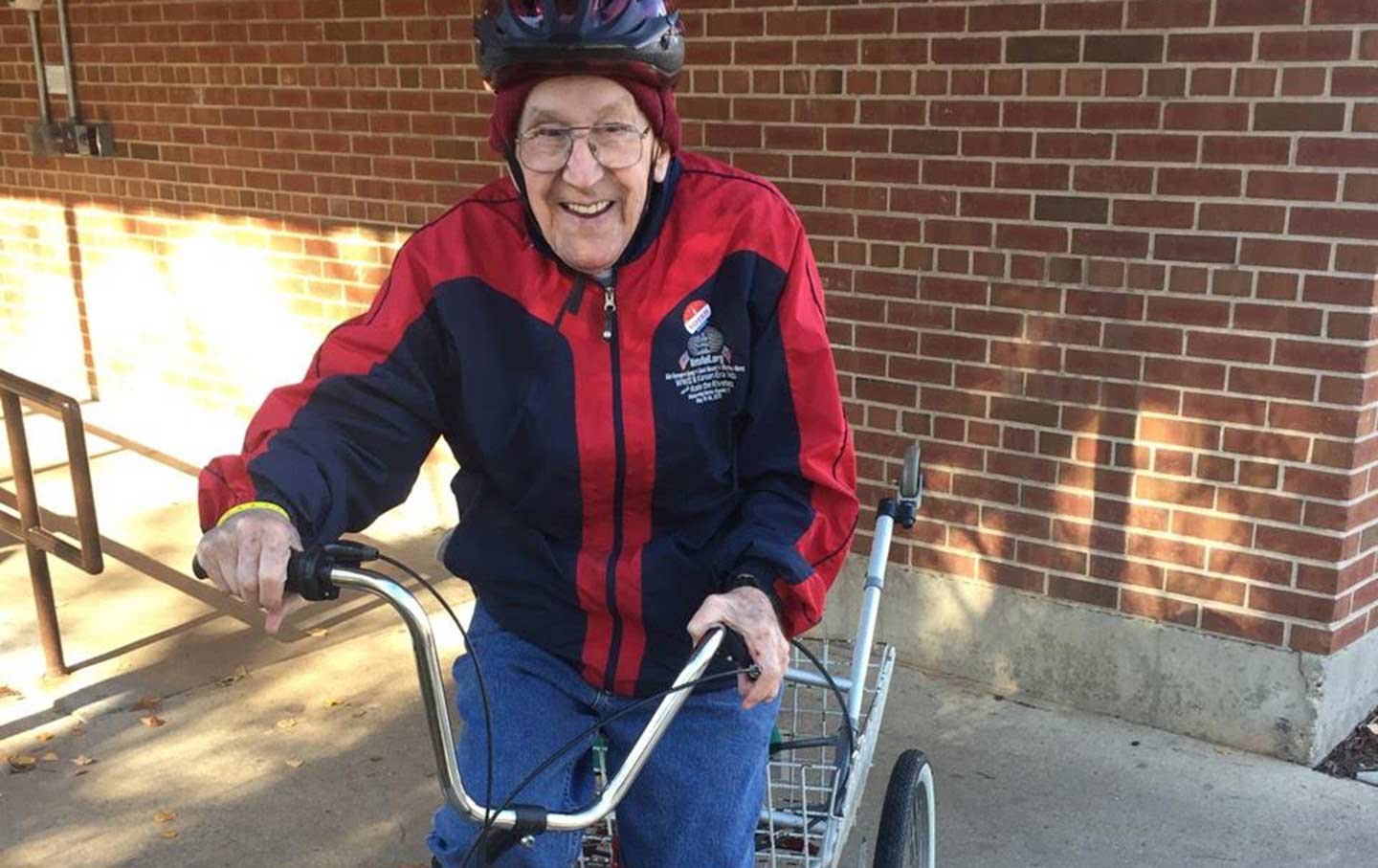 Madison, WI— Fred Leidel was born in 1916, before women got the right to vote. At 99 years old, he biked to the polls in Madison, Wisconsin, this morning. He designed propeller blades for airplanes during World War II and was an engineering professor at University of Wisconsin–Madison. Everyone knows him at his polling place, Schenk Elementary School, where he volunteers to read to kindergarteners.

But for the first time in his life, Leidel was turned away from the polls. He no longer drives, and his UW faculty ID, which he used to vote in the past, wasn’t accepted under the state’s strict voter-ID law. “I never had any problems voting until today,” he said.

The poll workers called Molly McGrath of VoteRiders, who helps people get voter IDs. She took Leidel to the DMV in East Madison, where he was issued a new state ID and given a temporary receipt for voting. Leidel returned to the polls a second time and successfully cast a ballot. If it hadn’t been for McGrath’s assistance, he would’ve been disenfranchised a month before his 100th birthday.

Leidel has always voted. “It’s my country,” he told me. “I’m only one person, but I want to be recorded for what I believe.”

He considers himself a Democrat and voted for Hillary Clinton. “I think women are equal to men. We had our first black president, it’s time we had our first female one.”

This is Fred, 99, from Madison. Engineer in WWII. Made 2 trips to polls & 1 to DMV with @votermolly to get photo ID to vote in WI today pic.twitter.com/B5w2EUTnnN

Across Wisconsin today, many longtime voters had difficulty exercising their most fundamental right because of the state’s voter-ID law.

Ruby McGhee, an 80-year-old African-American woman, was born on a farm in Jim Crow Arkansas on Thanksgiving Day 1935. She lived in Illinois since the 1940s and voted without problems since her 20s. She moved to Wisconsin in 2008 to live with her daughter and brought her Illinois ID, Social Security card, and proof of Wisconsin residency to the DMV to get a Wisconsin voter ID. But she was denied an ID because she didn’t have a birth certificate.

“They said what I needed was a birth certificate, which I don’t have,” McGhee said. “My mother had me at home. I couldn’t get the ID. That was my downfall.”

She contacted McGrath, who helped her get a temporary credential for voting, which she used on Tuesday. Voting has always been important to her. “I want to put the right person in the right place at the right time,” she says. “That’s why I always vote.”

This is Ruby, 80, from Madison. Born in Jim Crow Arkansas. Took 2 trips to DMV & court order for her to get credential to vote in WI today pic.twitter.com/YQuetxI0uE

McGhee was lucky enough to vote today, but her temporary voting credential is only valid for 120 days, which means she will not be able to vote in the next major election unless Wisconsin’s law changes.

Not everyone was as determined to vote as Leidel and McGhee.

Margie and Alvin Mueller, who are 85 and 86 years old, went to vote early in Plymouth, Wisconsin. They’ve been married for 64 years, have lived in the same house since then and always vote at the same place. But Margie’s ID was not accepted because her driver’s license is expired and she no longer drives.

Election officials said she had to get a new ID in Sheboygan, which is 25 minutes away. Margie is a cancer survivor who’s in between radiation and wasn’t up for the trip. “When you’re 85, I guess you don’t count anymore,” she said. Her husband was so angry, he decided not to vote, either.

“I could’ve voted, but when they pulled that crap, I didn’t want to vote,” Alvin said. “We could’ve gone to Sheboygan, but it’s just the idea of it—to pull that crap, when she has a picture ID, what more do you want?” He blamed “the damn Republicans,” who he said “don’t want Latinos and old people to vote.”

Hey @RepGrothman,remember that voterID suppression secret that you said outloud?

Here are two of the constituents YOU SERVE.

The Muellers, incidentally, live in the district of GOP Rep. Glenn Grothman who predicted during the primary that Republicans would carry Wisconsin in November because “now we have photo ID.”