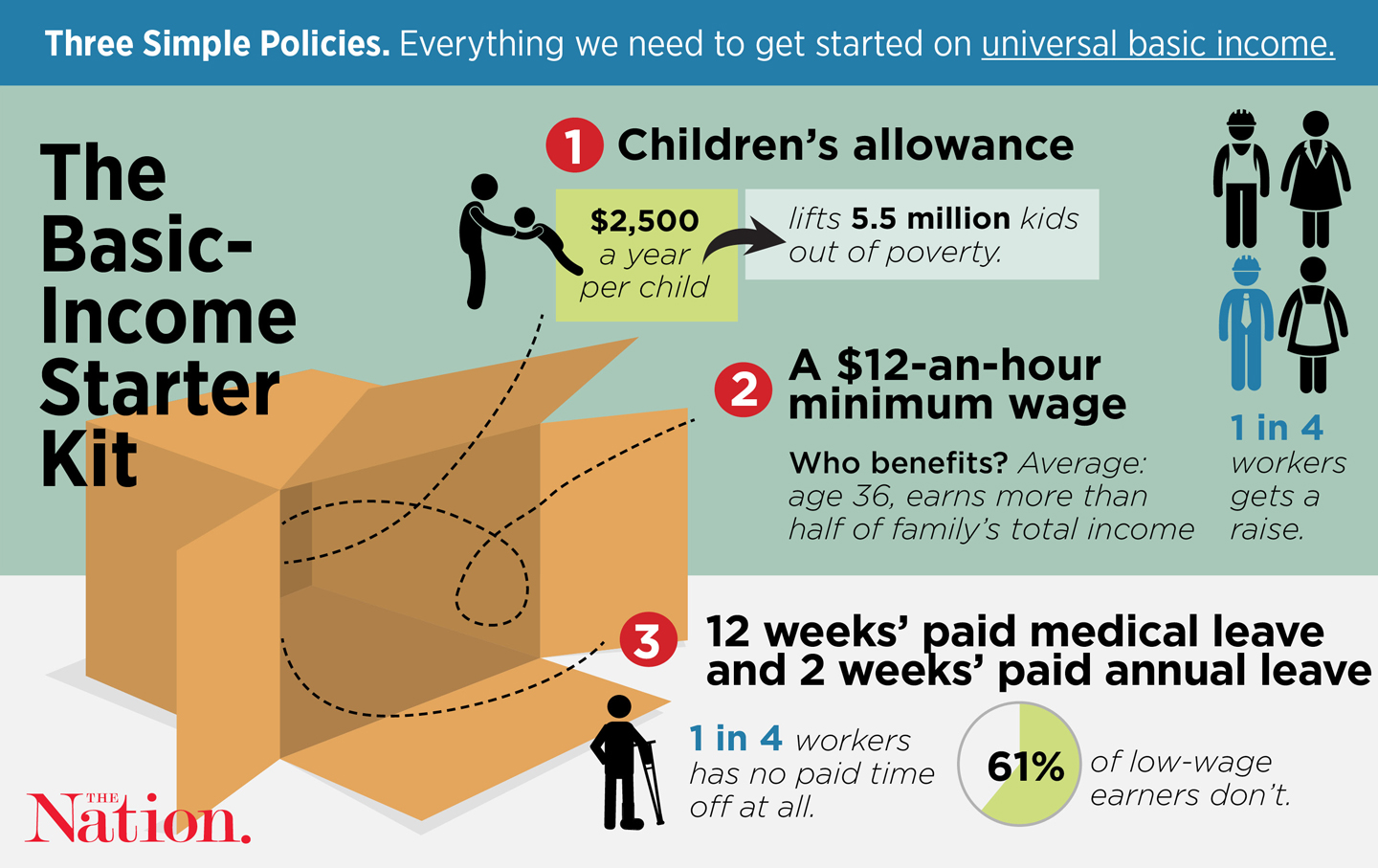 As the economy continues to struggle, the debate over guaranteed basic income is back in the headlines. The idea is both simple and basic: Give people enough cash to eliminate poverty. A guaranteed check for, say, $12,000 a year per person would accomplish this. It could be arranged relatively easily through the tax code, without a large, stigmatizing welfare apparatus to go with it.

Yet this debate stalls because it directly challenges how we think about work and money. Won’t people simply sit around and play video games? Do we want to endorse the right to be lazy? A basic-income referendum was rejected overwhelmingly by Swiss voters in June, in part over such concerns. But proponents argue that a lot of labor—care work in the home, community work—is currently unpaid, and that the increasing mechanization of work might leave us with still fewer jobs. Experiments in Canada have shown that the fear that a guaranteed basic income would destroy all incentive to work is unwarranted. New experiments to further test its effects are being launched in Kenya and elsewhere.

You probably don’t think 3-year-olds should survive only on the wages they earn.

Still, a guaranteed basic income would require a big shift in perspective among American voters. What we need is a policy (or perhaps several of them) that benefits Americans while destigmatizing the concept of giving people no-strings-attached cash. Think of it as a basic-income starter kit, which would also include things like a $12-an-hour minimum wage and generous paid leave. And there’s one policy in particular that should lead: a basic income for children.

Often called a “child allowance,” this would be a small cash payment made regularly to parents with children. We know that access to resources makes a major difference in the development of children. Yet 17 percent of children live in poverty according to the Century Foundation, with nearly 5 percent living in deep poverty (defined as just 50 percent of the poverty line). There are a lot of ways to structure such a program, but the idea is that any parents with a child would have a guaranteed level of income regardless of whether they work for wages. Unless you’re a stone-cold Randian, you probably don’t think 3-year-olds should survive only on the wages they can earn.

Since this allowance would be universal, it would avoid much of the stigma associated with the welfare system dismantled by former president Bill Clinton in the 1990s. Politically, it would counter the argument that people with basic incomes will frivolously play video games, cease contributing to society, and cause the decline of Western civilization. Practically, it would reward the essential labor that takes place within the household—work that the capitalist system relies on, but never pays for. Taking care of kids is hard work.

Such a program is clearly workable. Other countries, like Canada and England, have child allowances, and they’re very effective. Estimates from the Century Foundation argue that a $2,500-a-year child allowance would lift 5.5 million children out of poverty. That allowance would cost $100 billion a year—a hefty sum, but still less than 20 percent of the military’s budget, and about as much as it costs us to subsidize the wealthy by allowing them to pay lower taxes on capital income.

There are more programs we could add to this basic-income starter kit. Policies that encourage high wages and innovation will lead to further automation that could create the conditions for a “post-work” economy. This should be combined with the fight for fewer hours (paid at higher wages) for more people, thus avoiding conflicts and resentment between workers and nonworkers while shifting toward less work for all. President Obama’s changes to overtime regulations took a step in this direction: Rather than raising wages directly, they limited the number of hours that people work by requiring employers to pay extra for certain salaried workers after about 40 hours a week.

The arguments for a guaranteed basic income tend toward theoretical debates about the work ethic, even though the stakes are very high in practical ways. By enacting a basic-income starter kit, we can benefit from the most important elements of the concept while also making the broader case for why such policies would work in the future.