‘I Hate the Sound of Silence' by Cheryl Pope. (Photo: Luna Park)

Depending on the survey, somewhere between 25 and 40 percent of Americans use ad blockers online, especially millennials. But there’s no ad blocker for when you’re outdoors, and that’s where Madison Avenue hopes to catch your attention the most. Out-of-home advertising (also known as outdoor advertising) is a multibillion-dollar industry that prides itself on its omnipresence. “We never know where the consumer is going to be at any point in time, so we have to find a way to be everywhere,” one ad executive told The New York Times in 2007. “Ubiquity is the new exclusivity.” And ubiquitous they’ve become: The average American is potentially exposed to 10,000 advertisements a day, up from an estimated 2,000 in the 1970s.1 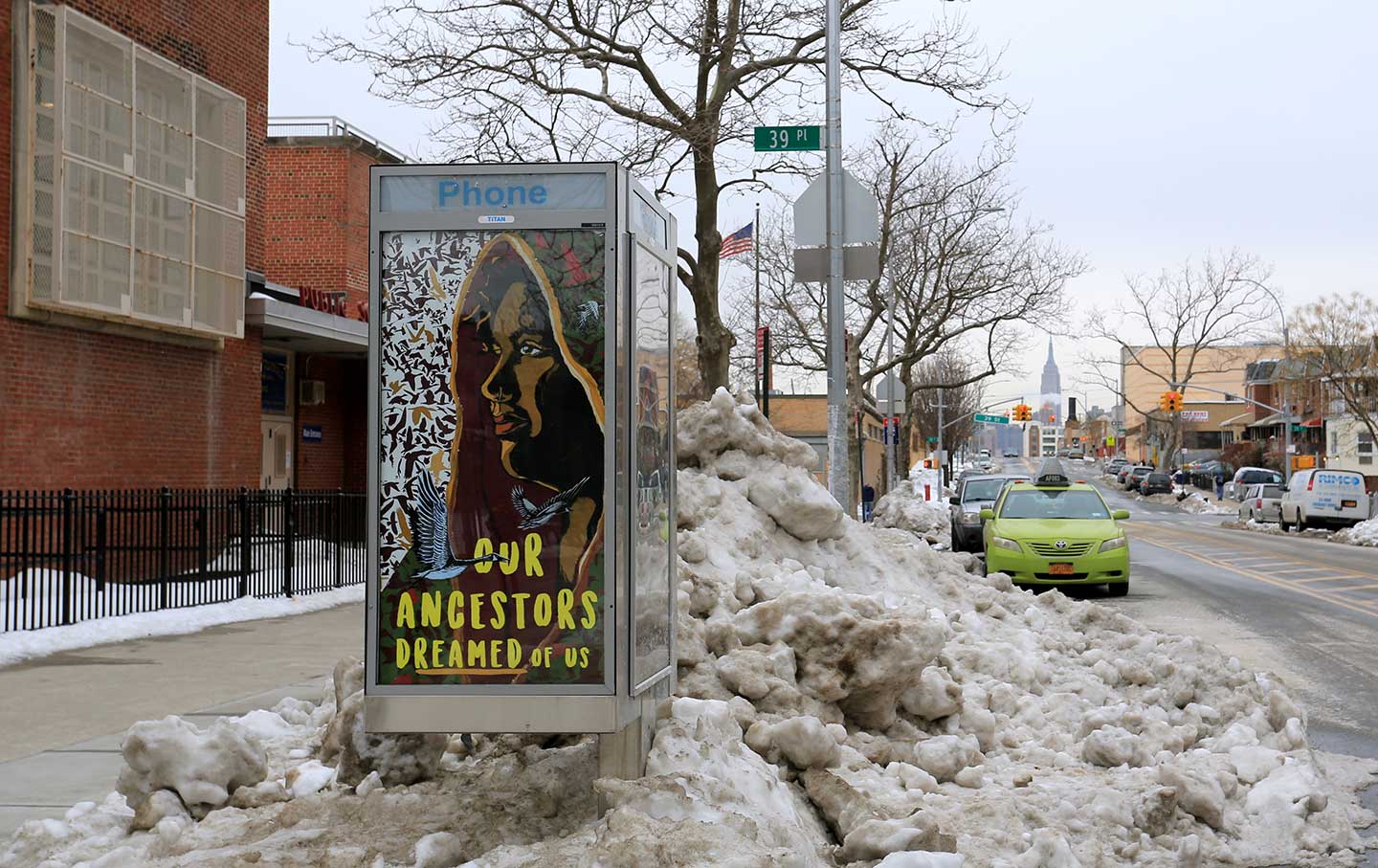 “Our Ancestors Dreamed of Us” by Jess X. Snow, in collaboration with Jordan Alam. (Photo: Luna Park)

If you think that’s a little excessive, you’re not alone: Most surveyed Americans believe that advertising is “out of control.” But when it comes to renting out public space to advertisers, cash-strapped local and state governments have put increasing their revenues streams over the concerns of their residents, particularly in the wake of the Great Recession. Some fire trucks in Baltimore now feature ads on their engines and ladders; Chicago’s recycling bins have Coke ads plastered on them; and school buses in Utah, New Jersey, Texas, and Arizona carry pizza ads on the side.2

Critics of these advertising ventures usually point to the intrusion they make on public spaces. Others dislike the idea of driving on Kentucky Fried Chicken–branded manhole covers for purely aesthetic reasons. But for Art in Ad Places, a new collective based in New York City, public and outdoor advertising is not only unseemly—it is a poison to the potential splendor of public space itself.3 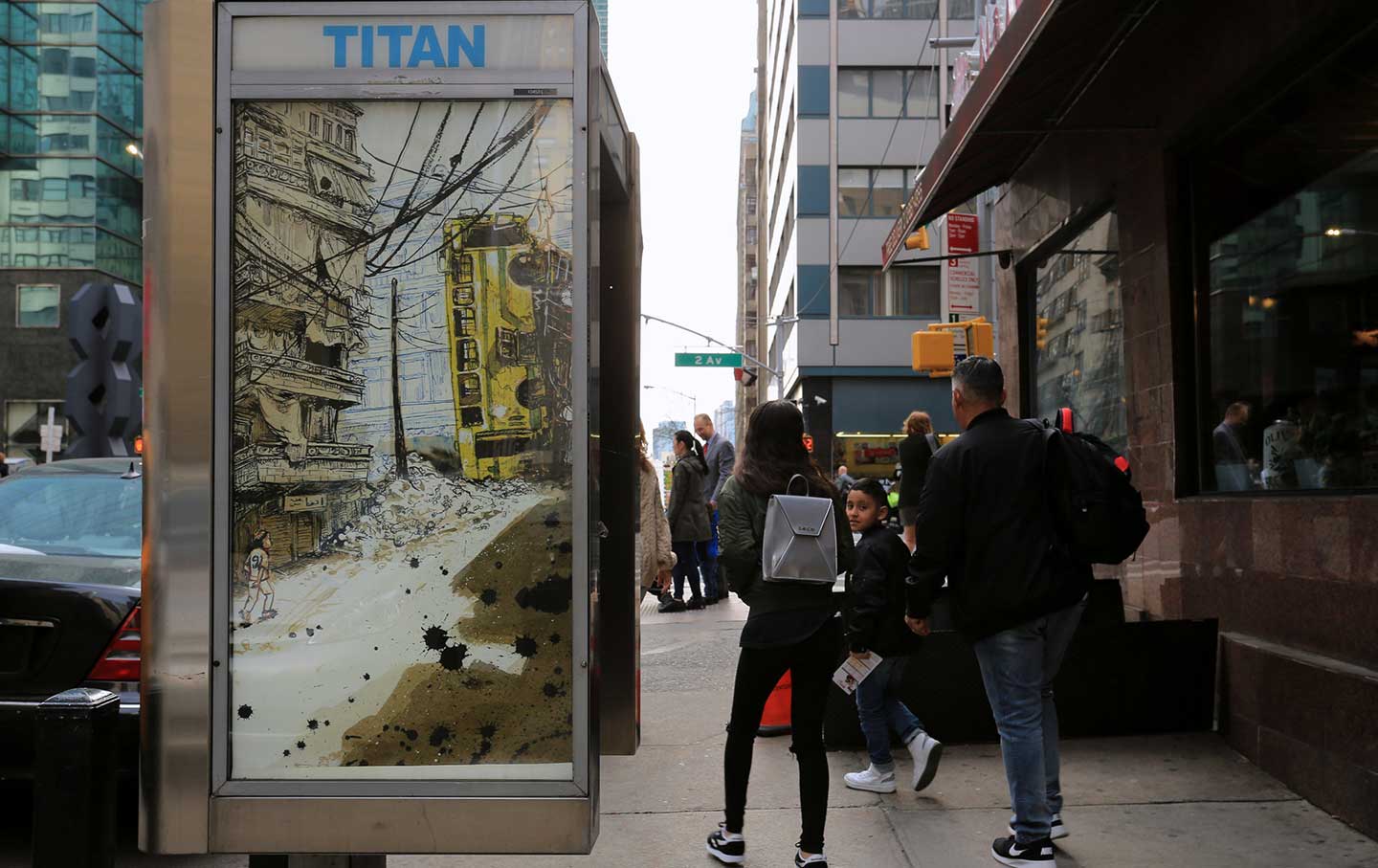 Curated by Brooklyn-based artists Caroline Caldwell and RJ Rushmore, Art in Ad Places is a yearlong campaign that takes over one piece of advertising a week in New York City—primarily on the outside of pay-phone kiosks—and replaces it with artwork from one of their dozens of partnered artists. Once the posters are up, photographer Luna Park captures the piece before it is taken down by authorities (they usually last a day or two) and uploads the photo to Instagram, Facebook, and the group’s website, alongside a blog post detailing the artists’ work.4

The idea behind Art in Ad Places took shape a year ago when Caldwell decided she had had enough of the giant billboard erected outside her apartment advertising $1,000 off a Brazilian butt lift. For Caldwell, the billboard was a prime example of the way in which ads encourage unnecessary spending through the promotion of self-doubt and inadequacy. Ads, then, are not a harmless marketing tactic. They are, as the group puts it, psychologically damaging visual pollution that is pushed on viewers without their consent.5 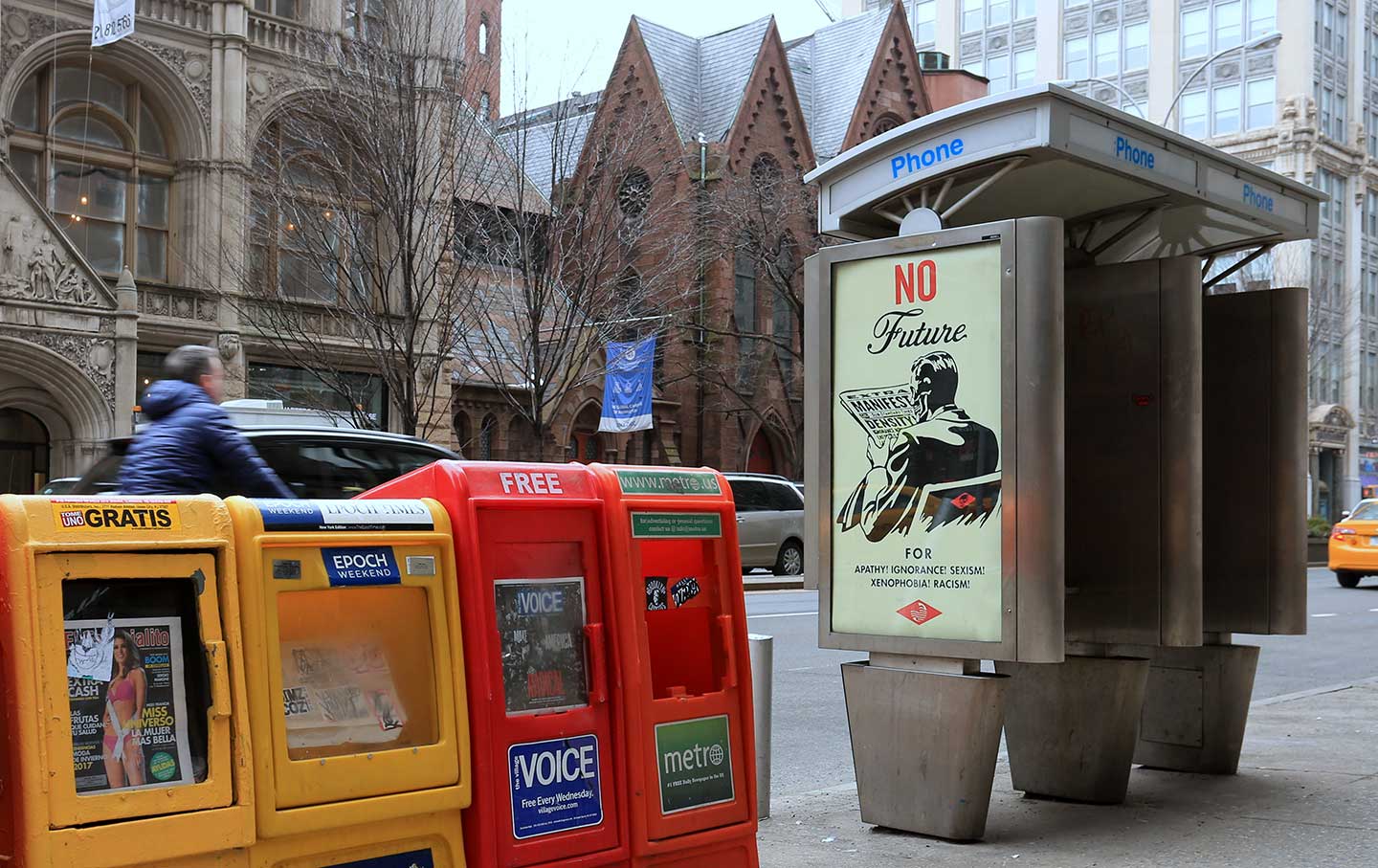 “The cornerstone of this project is the idea that public space is shared by everybody but only a few rich corporations decide what messages we are exposed to,” Caldwell said in a CBC Radio interview in February. “If everybody had a say in what public space looks like it would be a lot more dignified.”6

One of the group’s most recent takeovers featured a poster from Tatyana Fazlalizadeh’s “Stop Telling Women to Smile” campaign in honor of International Anti-Street Harassment Week. “Much like [Fazlalizadeh’s campaign], Art in Ad Spaces is about making environments where public space can be enjoyed, rather than endured,” reads the accompanying blog post. “No person should have to face cat-calling and other street harassment, or be subjected to advertisements that create and exploit low self-esteem.”7 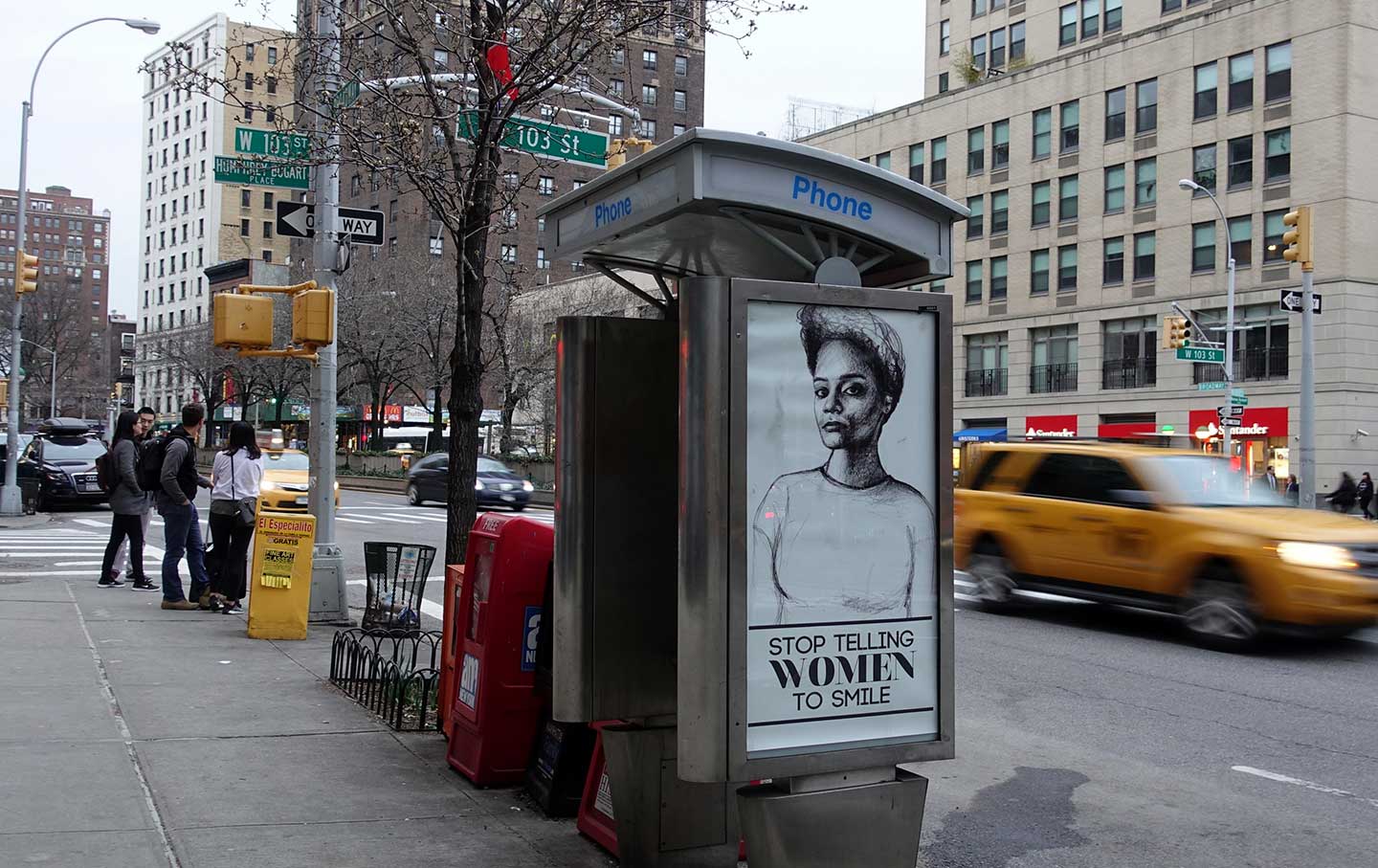 But not all the artwork is explicitly political. Last month, artist Jon Burgerman contributed two posters to the project featuring images of colorful and quirky small sculptures with big mouths and small frames. These type of pieces also carry an important message: “Rather than experiencing public space, we put our heads down…ignoring all the beauty (and the ads) that surround us,” the group writes. “Maybe [the sculptures] will spark curiosity and joy and go someway to remind us that we were all once children…who would play without any reason for doing so, and how wonderful that can be.”8 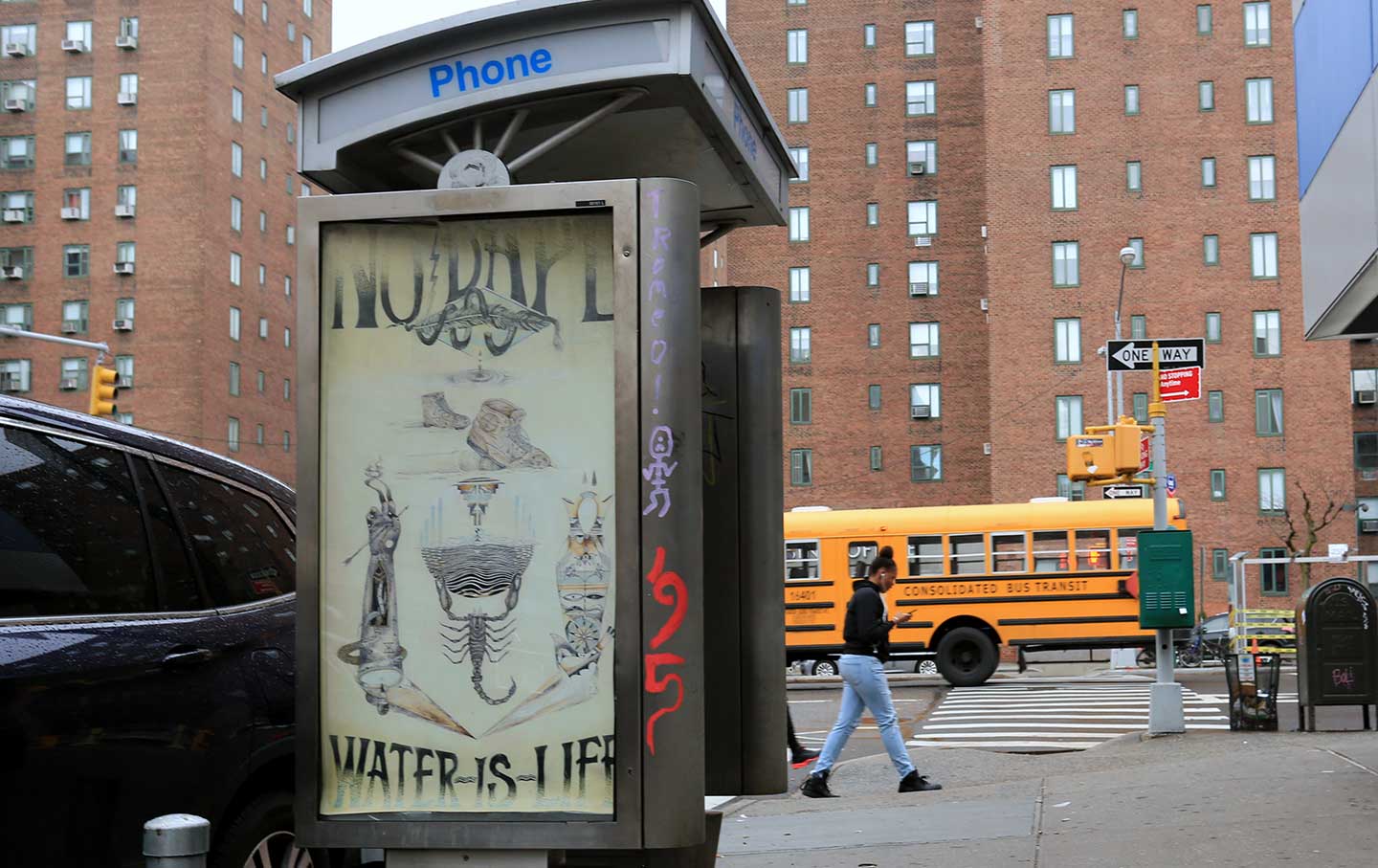 Central to the project is the use of pay-phone kiosks. Once a foundational public service, pay phones are now as useful as beepers and telegraphs. Their carcasses, however, still carry advertising. For Rushmore, that doesn’t add up.9

“There was once this compromise where as a society we said that we need pay phones and we don’t want to raise taxes to pay for them so we’ll let advertisers use the space on the side to make revenue,” he told The Nation in an interview last month. “Now, that compromise doesn’t make any sense. The kiosk we took over this weekend had two pay phones in it, none of them had a dial tone, and the kiosk had three ads on it. Why are we allowing this remnant of public space to still sell us stuff when it provides no useful service anymore?”10 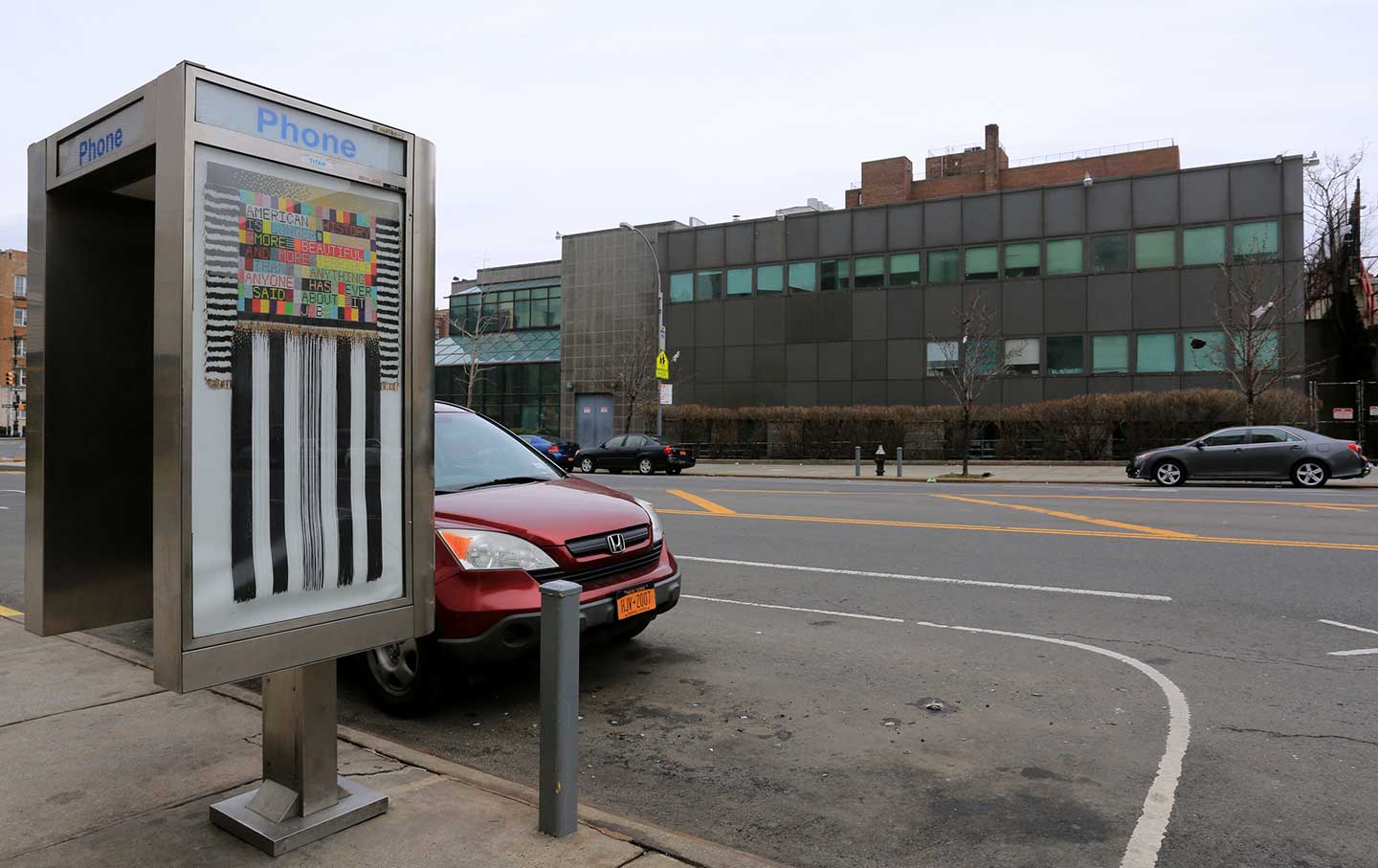 Art in Ad Places is a continuation in the decades-long history of culture jamming and anti-advertising activism. What distances the project from some of its contemporaries is its lack of a pedantic attitude toward its work. Instead of promoting the end of capitalism or treating the general public as “sheeple” in need of an awakening, Art in Ad Places asks people to participate in the reimagining of public space as a venue to promote something other than, say, deodorant. According to Caldwell and Rushmore, their tactics are working: Artists and community activists from around the country and some parts of the world have contacted the group for advice as to how to get similar projects up and running in other cities.11

Of course, public spaces will continue to be flooded with advertisements. But Rushmore isn’t concerned about immediate victories.12 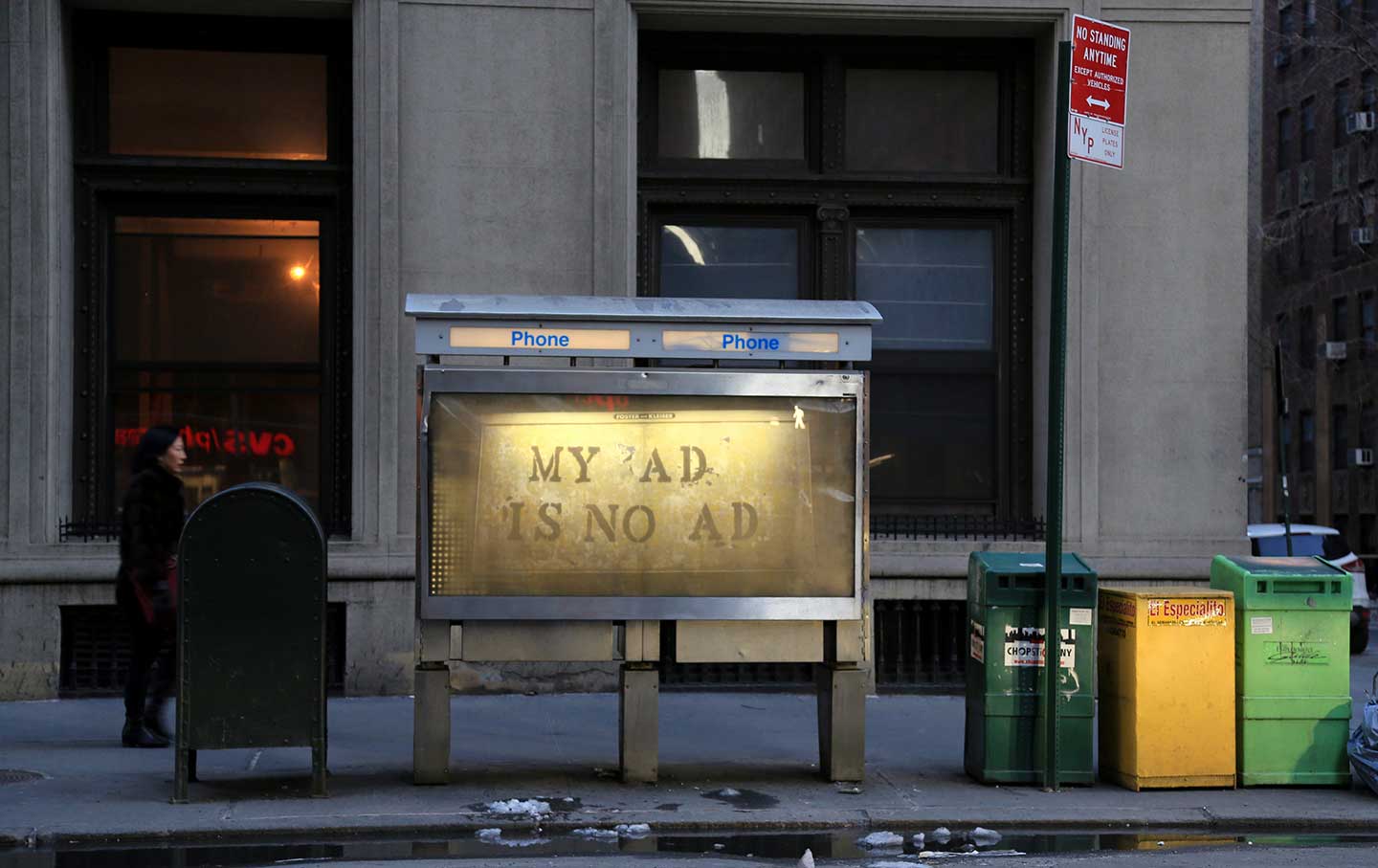 “The big impossible ask would be to officially turn over public spaces to artists and community nonprofits,” Rushmore says. “Is that going to happen over the next year? Probably not. But at least maybe at the end of the project people will say, ‘That sounds difficult, but it does sound nice.’”13