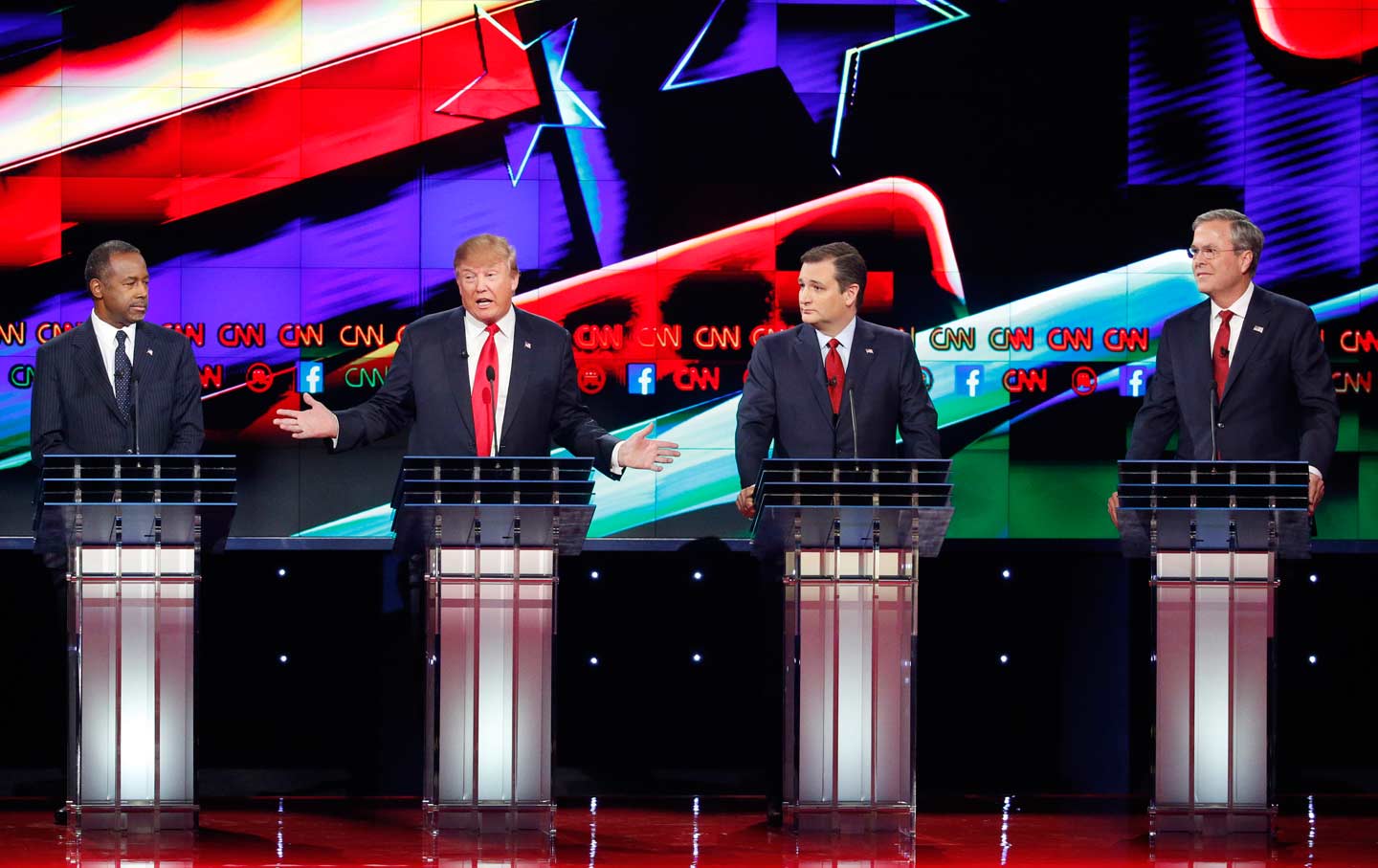 The 2016 Republican presidential candidates gathered in Las Vegas Tuesday night with two goals: to scare the hell out of the American people, and to promote themselves as the guy or gal who’ll keep us safe. They all succeeded at their first objective, but I’m not sure anyone scored on the second.

Frontrunner Donald Trump continued to promise he’d commit war crimes to defeat ISIS, by targeting fighters’ families. “Frankly, that will make people think because they may not care much about their lives, but they do care, believe it or not, about their families’ lives,” he told us. Senator Ted Cruz, who’s moved into second place and may lead in Iowa, continued to promise he’d “carpet-bomb” ISIS while not seeming to understand what the term means, since he promised he’d spare civilians and cities. Carly Fiorina, who’s fading fast, bragged about helping the NSA after 9/11 when she was Hewlett-Packard CEO—and may have divulged classified information.

Senator Rand Paul again played a valuable role by questioning whether more war will make us safe and asking why we continue to offer massive aid to regional powers that support ISIS. But then he played the fear-monger by attacking Rubio’s half-hearted push for immigration reform, which he contended weakened our national defense.

All of the candidates want to halt the flow of Syrian refugees to the United States, with Ben Carson suggesting they be sent instead into Kurdish territory, even though the goal of most Kurdish fighters involves establishing their own state, not one awash with Sunni Syrians.

Rubio and the other so-called establishment figures—Jeb Bush, Ohio Governor John Kasich, and New Jersey Governor Chris Christie—mostly sounded like they’d do pretty much what President Obama is doing, only better. Or something. “When I stand across from King Hussein of Jordan and I say to him, ‘You have a friend again sir, who will stand with you to fight this fight,’ he’ll change his mind,” Christie said. Unfortunately, King Hussein died 16 years ago; his son, King Abdullah II, has ruled since then. Christie also promised to impose a Syrian no-fly zone where he’d shoot down Russian jets.

Bush tried to reanimate his fading campaign by picking a couple of fights with Trump. “He’s a chaos candidate, and he’ll be a chaos president. He would not be the commander in chief we need to keep our country safe,” Bush said. When Trump mocked Bush’s troubled candidacy, the former Florida governor replied: “Donald, you’re not going to be able to insult your way to the presidency.”

But so far, there’s no evidence for that claim. No one had the kind of night they needed to knock Trump off his pedestal. A few pundits tried to declare Rubio the winner. Politico’s Mike Allen said the night proved that “Marco Rubio is the Barack Obama of 2008.” National Review editor Rich Lowry tweeted, “Rubio v Cruz was the main event. I give it to Rubio on pts.”

But Rubio is almost always declared the debate winner, yet never makes a leap in the polls. He may have the (relative) youth of Barack Obama, but none of his stunning campaign organization. The media will continue to cling to the idea that Rubio is surging, because the right-wing junior senator is what passes for establishment conservative in the modern GOP. So far the voters aren’t buying it: The race has been dominated by Trump, Carson, and now Cruz. Rubio didn’t do much in the debate to move up into the top tier, unless GOP voters are itching for a Syrian ground war, which he promised.

The establishment may not like it, but the GOP has become Trump’s party, and Tuesday night didn’t change that.