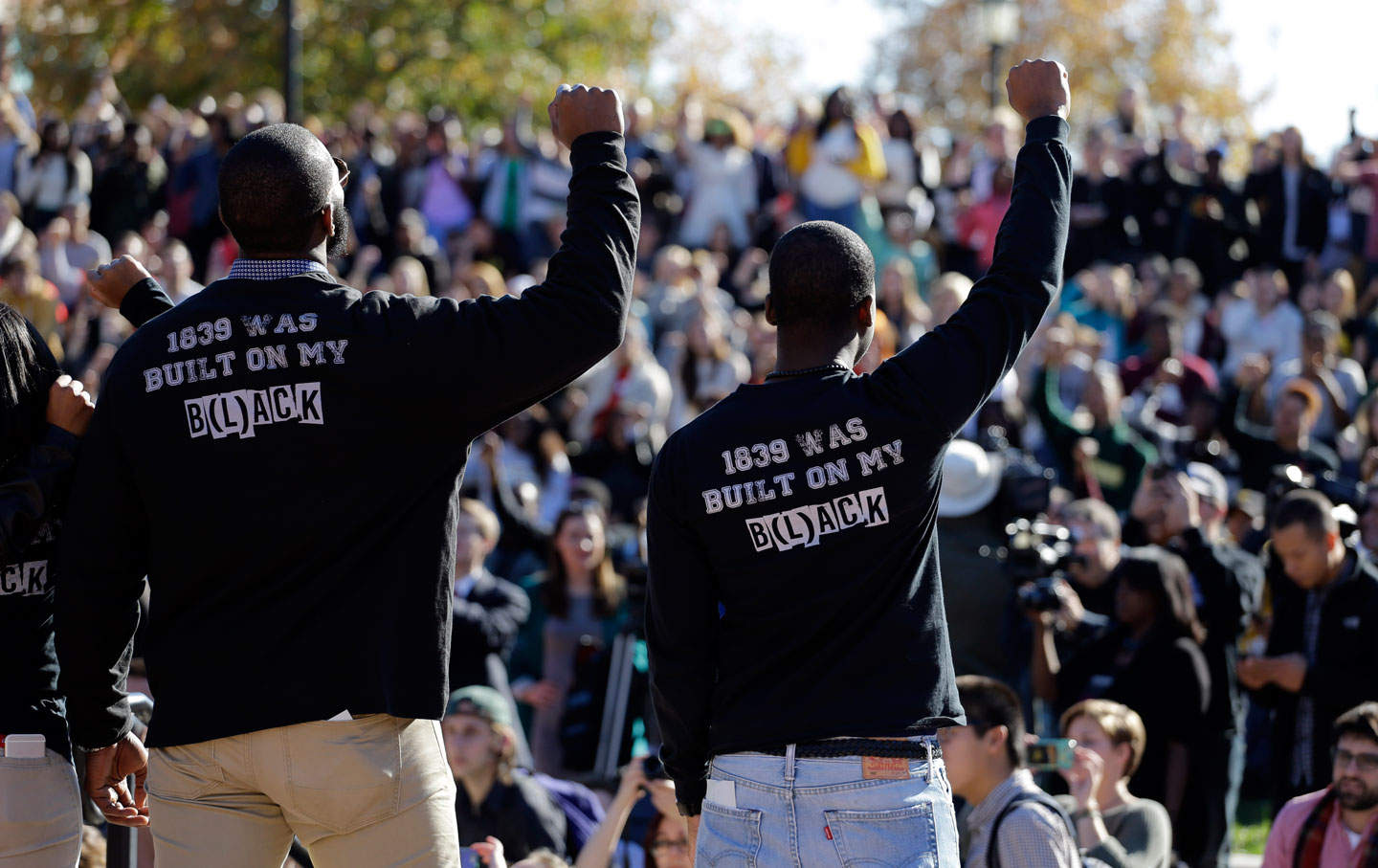 Many campuses are organizing under the name of the Black Liberation Collective, a group of black students “dedicated to transforming institutions of higher education through unity, coalition building, direct action and political education.” Well-known activists DeRay McKesson, Johnetta Elzie, Samuel Sinyangwe, and Brittany Packnett have compiled a public list of the demands made by such groups at 86 universities.

Schools that wish to retain their titles as centers of progressive thought would do well to follow students’ lead.

By and large, the demands of the protesters at many of these universities have been specific and well thought-out. As a collective, students have demanded that the percentage of black students and faculty reflect the black population on a national scale. At Bard College, protesters have called for the university to institute mandatory anti-racism training for academic or extracurricular credit. At Tufts, students have demanded a 25 percent increase in the budget of their Africana Center. Students at California Polytechnic State University have asked that professors in STEM-related fields more readily incorporate feminist and antiracist perspectives in their curriculum.

And yet the specificity of students’ demands has, with few exceptions, been met with reactionary, symbolic, and seemingly scripted responses from their respective administrations.

The response follows a too familiar pattern: First, one or two high-ranking university officials apologize for their silence in the face of injustice and perhaps announce their resignation. Then, a committee or task force of students and faculty is hand picked by the administration to “help bridge our differences and promote meaningful dialogue and conversations,” as President Robert A. Brown of Boston University put it. By filling these committees with students and faculty they know—and thus can control—administrators prevent large numbers of more radical students from participating in the transformation of their campuses. Finally, an e-mail filled with buzzwords such as “diversity,” “inclusion,” and “community” is sent to everyone in the campus community in attempt to publicly reaffirm the university’s commitment to supporting its students—all of its students—before going back to business as usual.

The result is that students’ radical demands are diluted, simplified, and re-situated within the same university model that created the very problems that they are protesting.

The long history of student-led activism shows us that business as usual is the most potent threat to radical change.

My aim is not to diminish the importance of the steps that universities have begun to take in response to student protesters; even these small changes are a victory for campus activism. But they are not nearly enough. At a time when the Supreme Court is seriously considering a case that could drastically reduce the number of students of color on college campuses, the scapegoating of one or two college administrators—no matter how high their rank—is not enough. This is a reality of which student organizers are intimately aware, which is why their demands have prioritized funding for cultural centers, implementation of diversity training, and increased diversity among students and professors, over apologies and the removal of university officials.

Though many universities seem blind to this fact, it will take more than vague promises and un-operationalized goals to make the necessary leap from talking about diversity and inclusivity to actually ensuring that all members of our university communities are meaningfully participating, actively valued, and consistently protected.

The long history of student-led activism shows us that business as usual is without question the most potent threat to radical change. And though it shouldn’t be radical for students to ask that their universities respect and reflect their experiences, it is. This latest protest movement led by students of color reflects a shifting balance of power between students and faculty on American universities, a credible threat to the established hierarchy. Students’ demands—and their commitment to see these demands come to fruition—are a direct challenge to the traditional university model in which white-supremacist hetero-patriarchy is the unquestioned and quietly perpetuated norm.

We do ourselves a disservice by forgetting or ignoring that the current university model, especially as it plays out in more elite institutions, is the very same one that was created in an era when the preservation and inherited transmission of wealthy white males’ hegemony was rarely questioned—a world not so unlike the one we still inhabit. It is possible, and perhaps certain, that this model is not reconcilable with the latest movement of anti-racist student activism. If so, universities that wish to retain their title as centers of progressive thought would do well to follow their students’ lead in reimagining and recreating their institutions.