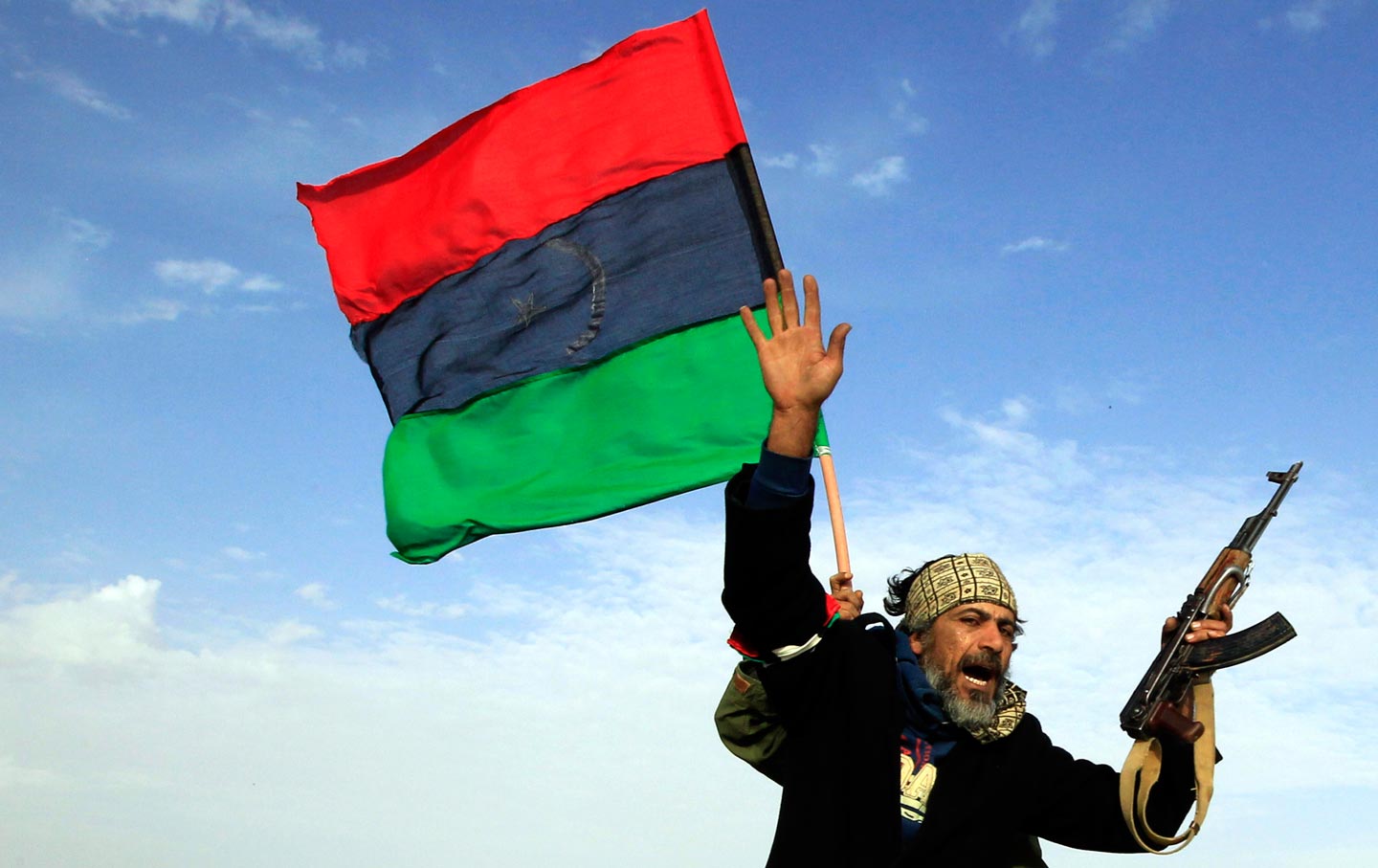 A rebel soldier gestures atop a car as he heads to Brega, Libya, in March 2011. (Reuters / Goran Tomasevic)

With the American media fixated on Donald Trump’s latest outrage, a new report by the British Parliament’s Foreign Affairs Select Committee on the origins, policies, and aftermath of NATO’s military intervention in Libya in 2011 has gone largely unnoticed.

The report’s findings are a devastating indictment of the leadership of then–Prime Minister David Cameron (who declined to cooperate with the committee) as well as his foreign secretary, William Hague, and defense minister, Liam Fox (who did). The report puts a stake through the heart of the reigning establishment narrative that intervention was justified because Libyan leader Muammar Qaddafi was about to unleash a massacre on the rebel stronghold of Benghazi—an untruth that has been endlessly repeated by the Democratic nominee for president, Hillary Clinton, who was a driving force behind the intervention. The new report should—but probably will not, given the sorry state of the 2016 campaign—draw attention to Clinton’s long record of supporting military interventions in lieu of diplomacy.

The report states that the Libyan intervention was “not formed by accurate intelligence” and that the Cameron government failed to see that “the threat to civilians was overstated and that the rebels included a significant Islamist element.”

The report questions how the imposition of a UN-mandated no-fly zone—established in order to protect civilians—transformed into a policy of regime change. The UK’s Chief of the Defence Staff at the time, Gen. David Richards, told the committee that “one thing morphed almost ineluctably into the other.” The report points out that as early as March 20, 2011, Qaddafi’s forces had retreated 40 miles from Benghazi after a series of attacks by the French air force. “If the primary object of the coalition intervention was the urgent need to protect civilians in Benghazi,” notes the report, “then this object was achieved in less than 24 hours.”

Was regime change really necessary? The report takes serious issue with the idea that Qaddafi was on the verge of committing a mass slaughter. The Select Committee notes: “Despite his rhetoric, the proposition that Muammar Gaddafi would have ordered the massacre of civilians in Benghazi was not supported by the available evidence.” Indeed, only days before the launch of military action by the West, Qaddafi addressed the rebels, telling them: “Throw away your weapons, exactly like your brothers in Ajdabiya did. They laid down their arms and they are safe. We never pursued them at all.” Which, as the report observes, is true.

Disturbingly, all of this was clear by the time President Obama addressed the situation in Libya on March 18, 2011, when he told the nation that if “left unchecked…Qaddafi would commit atrocities against his people. Many thousands could die. A humanitarian crisis would ensue. The entire region could be destabilized, endangering many of our allies and partners.”

But this bow to unreality was not nearly enough for prominent cheerleaders of military intervention like The New Republic’s Leon Wieseltier, who groused, “The situation was even worse, and more urgent, than [President Obama] allowed: left unchecked, Qaddafi already had committed atrocities against his people.”

But the president’s decision to finally intervene in Libya left others exultant. Former State Department official Anne Marie Slaughter e-mailed Hillary Clinton in the days following Obama’s decision, writing, “I cannot imagine how exhausted you must be after this week, but I have never been prouder of having worked for you.” Slaughter continued, “Turning POTUS around on this is a major win for everything we have worked for…”

Nor was Slaughter alone in her enthusiasm. The Daily Beast’s John Avlon felt the frisson of a history-making moment, declaring that Clinton, national-security adviser Susan Rice and UN Ambassador Samantha Power’s successful push for war was “historically significant.” According to Avlon, their successful lobbying of the president represented “a small mark of our constant evolution toward a more perfect union, even within our civilian-led military.”

While Avlon’s puerile rhapsody points to the utter lack of media accountability in foreign policy reporting, the UK Select Committee’s report is actually a good example of what accountability in government looks like. It unequivocally states that “through his decision making in the Nation Security Council, former Prime Minister David Cameron was ultimately responsible for the failure to develop a coherent Libya strategy.” Compare the professional, thorough, and surprisingly readable UK report to the farcical Benghazi hearings held by the US House of Representatives in October 2015, the sole purpose of which, as Republican House Majority Leader Kevin McCarthy admitted, was to run down Hillary Clinton’s favorability ratings.

Meanwhile, the cost of the regime-change war in Libya in lives and treasure has been immense. Libyan GDP collapsed from $75 billion in 2010 to just over $41 billion on 2014, while its place on the UN’s index of human development slid from 53rd (in 2010) to 94th (in 2015). The report points out that by 2016, out of Libya’s 6.3 million people, “3 million have been impacted by the armed conflict and political instability and that 2.4 million require protection and some form of humanitarian assistance.”

Still worse, the intervention resulted in an estimated 400,000 internally displaced people, helped cause a migrant crisis in Europe, and made space for the rise of ISIS which, according to the report “emerged in Libya in 2014, seizing control of territory around Sirte and setting up terrorist training centers.”

Meanwhile, the US military has returned to Libya, conducting drone and special operations there, five years after the initial intervention. In an interview with The Atlantic earlier this year President Obama described the Libyan intervention as “a shit show.” As the UK report notes, “It is difficult to disagree with this pithy assessment.”