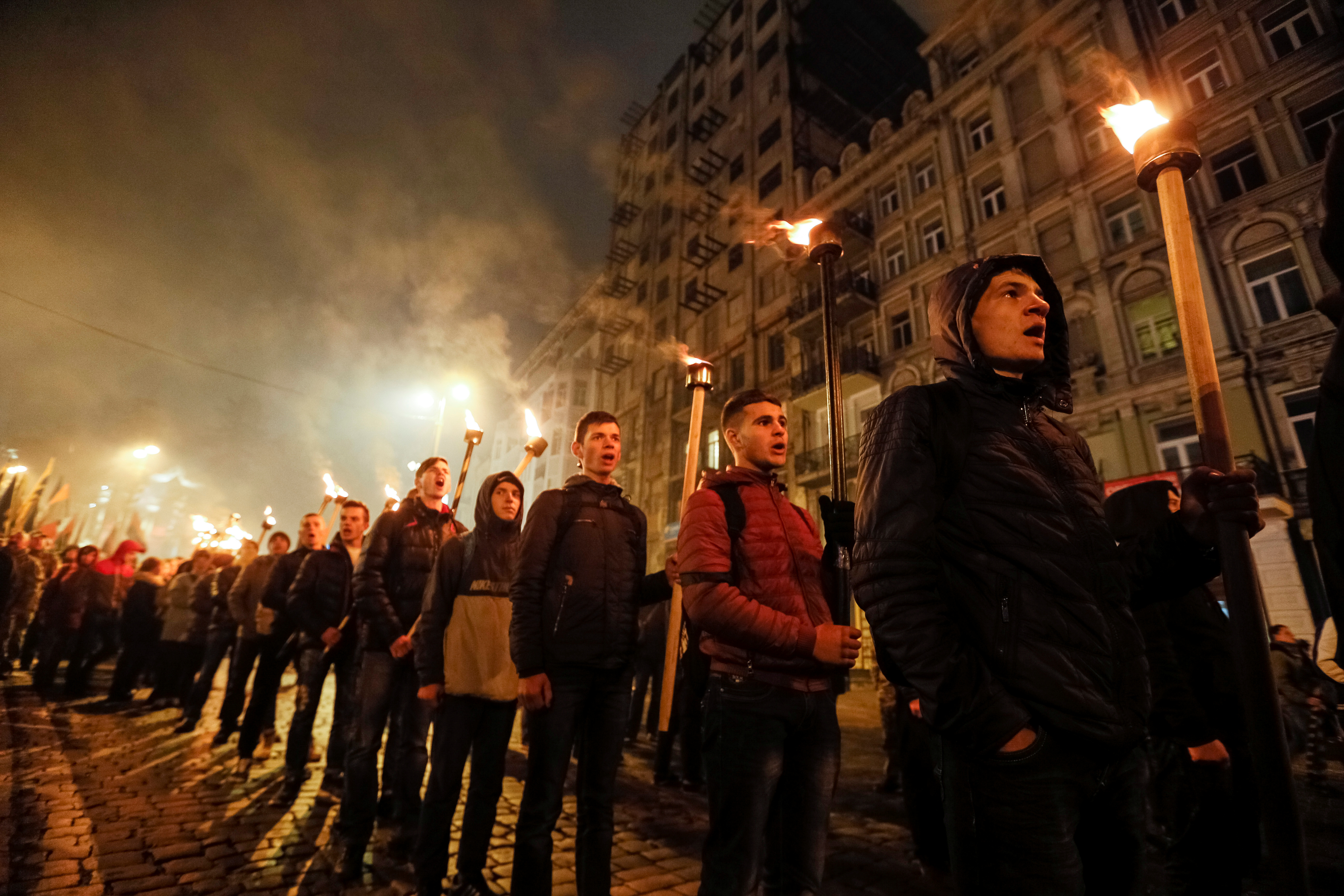 It should be a priority for the incoming Donald Trump administration to reexamine America’s role in the Ukraine crisis. Over the past year, Washington has focused solely on Kiev’s failure to tackle Ukraine’s endemic corruption, while ignoring another fundamental obstacle to Ukraine’s democracy: the country’s far-right forces.

In Ukraine today, power is split between Kiev and heavily armed ultranationalist battalions, which have a long record of not only clashing with Kiev but also defying the will of the EU and Washington.

The ultranationalists’ influence via a policy of veto-through-violence is best exemplified by their continued derailment of the Minsk Accords, the agreement for settling the conflict in the Donbass region of eastern Ukraine. Minsk is also the key to lifting the anti-Russian sanctions that are hurting European economies and fomenting resentment in countries like France and Italy. It’s no surprise that Paris, Berlin, and the UN have repeatedly stressed that Minsk remains the only solution to the Ukraine conflict. For Ukraine’s far right, however, the accords—which require Kiev to grant Donbass special status, including the right to use the Russian language—are anathema. Accordingly, whenever the West nudges Ukraine to fulfill its Minsk obligations, the far right steps in, often with violence.

In July of 2015, the US State Department took extraordinary pains in urging Kiev to implement the special-status law required by Minsk: Assistant Secretary of State Victoria Nuland flew to Kiev and, together with then-Ambassador Geoffrey Pyatt, watched as the parliament introduced the bill. A month afterward, during the first reading, ultranationalists killed four guardsmen and injured over 100 others in a grenade attack outside the parliament building; the special status law has remained in legislative limbo ever since.

Nearly a year after, leaders of France and Germany, whose economies have suffered as a result of Minsk-related sanctions, attempted to breathe life into the peace process by telling Kiev to conduct elections in Donbass (another provision in the road map). This time, the far right didn’t wait for a vote. Andriy Biletsky, the commander of the 3,000-strong Azov Battalion, publicly warned that his forces will remove the entire parliament if it allows the elections to take place, as 10,000 men marched through the capital to underscore the threat. Needless to say, the election provision wasn’t brought to a vote.

It is difficult to imagine any stable administration tolerating three years of such brazen challenges to its monopoly over the use of force, yet nearly all of the far right’s actions have gone unpunished.

One reason behind Kiev’s inability and unwillingness to rein in the battalions is because they remain the fiercest, most battle-hardened units in the armed forces; it’s hard to send in the National Guard to restore order when the National Guard itself consists of ultranationalist formations. An equally disturbing reason is that Ukraine’s far right enjoys the support of two extraordinarily powerful politicians: Parliament Speaker Andriy Parubiy and Interior Minister Arsen Avakov.

Both men played a critical role in harnessing neo-Nazi street muscle during the winter 2013–14 Maidan uprising that resulted in the ouster of corrupt, albeit democratically elected, president Viktor Yanukovych. Parubiy’s ties with the far right go back decades: He co-founded and led the Social-National Party of Ukraine, which used neo-Nazi symbols and whose name, according to Der Spiegel, is an intentional reference to the Nazi Party.

Although Parubiy has not been formally affiliated with far-right organizations since the early 2000s, he has spoken fondly of his past; when prodded to repudiate his background in a 2015 interview, he insisted that his “values” have not changed. Parubiy’s history served him well: He was responsible for organizing ultranationalists into Maidan “self-defense” units that made Yanukovych’s overthrow possible, and assured Parubiy a prominent role in the new government. (The information that the man spent over a decade leading neo-fascist organizations was conspicuously absent from press releases during his 2015 and 2016 visits to meet with members of Congress and Washington think tanks.)

Avakov, in turn, developed Maidan’s “self-defense” formations into heavily equipped paramilitary units that fought in Donbass as well as brutally suppressed any hint of secession in Russian-speaking cities that had not yet fallen to the rebels. In the process, these units amassed a horrific record of rape, torture, kidnapping, murder, and possible war crimes, as attested by numerous Amnesty International and United Nations reports.

After becoming interior minister, Avakov has promoted figures such as a veteran of the neo-Nazi group Patriot of Ukraine and the Azov Battalion who recently became acting chief over Ukraine’s National Police. The National Police—which was funded, equipped, and trained by Washington—was once held up as a shining example of Washington’s guiding Ukraine toward democracy. The fact that it’s now run by a man with neo-Nazi ties is a particularly ironic example of unintended consequences.

It’s no surprise that, with influential leaders tied to the far right, inquiries are quashed by Kiev. Requests by the Council of Europe to look into the May 2, 2014, massacre in which 48 pro-Russian Ukrainians were burned alive after being chased into an Odessa building by radicals have yielded nothing. When an ultranationalist website leaked personal information about journalists who reported from the Donbass conflict zone, labeling them “terrorist collaborators,” it triggered an international backlash from The New York Times and The Daily Beast to the Organization for Security and Cooperation in Europe. The website, however, is tied to Avakov, and despite a vociferous outcry from Western media, it has not been shut down.

Kiev’s tolerance of the far right is even generating pushback from Poland, one of Ukraine’s biggest supporters and certainly no friend of the Kremlin. This summer, Ukraine renamed a major boulevard in honor of Stepan Bandera, the leader of partisan groups responsible for the slaughter of thousands of Jews and over 100,000 Poles during WWII. In response, the Polish parliament unanimously passed legislation calling the massacres a genocide committed by Ukrainian nationalists. Kiev’s insistence on glorifying Bandera’s organizations has eroded Polish-Ukraine relations to the point where a Ukrainian flag was recently burned in Warsaw.

Washington has been right to pressure Kiev to battle corruption and enforce the rule of law—as a New York Times editorial bluntly stated, America “cannot continue to shovel money into a corrupt swamp unless the government starts shaping the democratic rule that Ukrainians demanded in their protests.” The presence of armed white-supremacist formations with free rein to influence domestic and foreign policy poses a threat to democracy that’s at least as serious as graft. It is especially necessary to address this in 2017, as ultranationalism, racism, and anti-Semitism are surging throughout European nations, many of which lack the democratic safeguards of the United States. Washington must stop ignoring the far right in Ukraine, or risk sending an unhealthy message of tolerance to white supremacists, both at home and abroad.