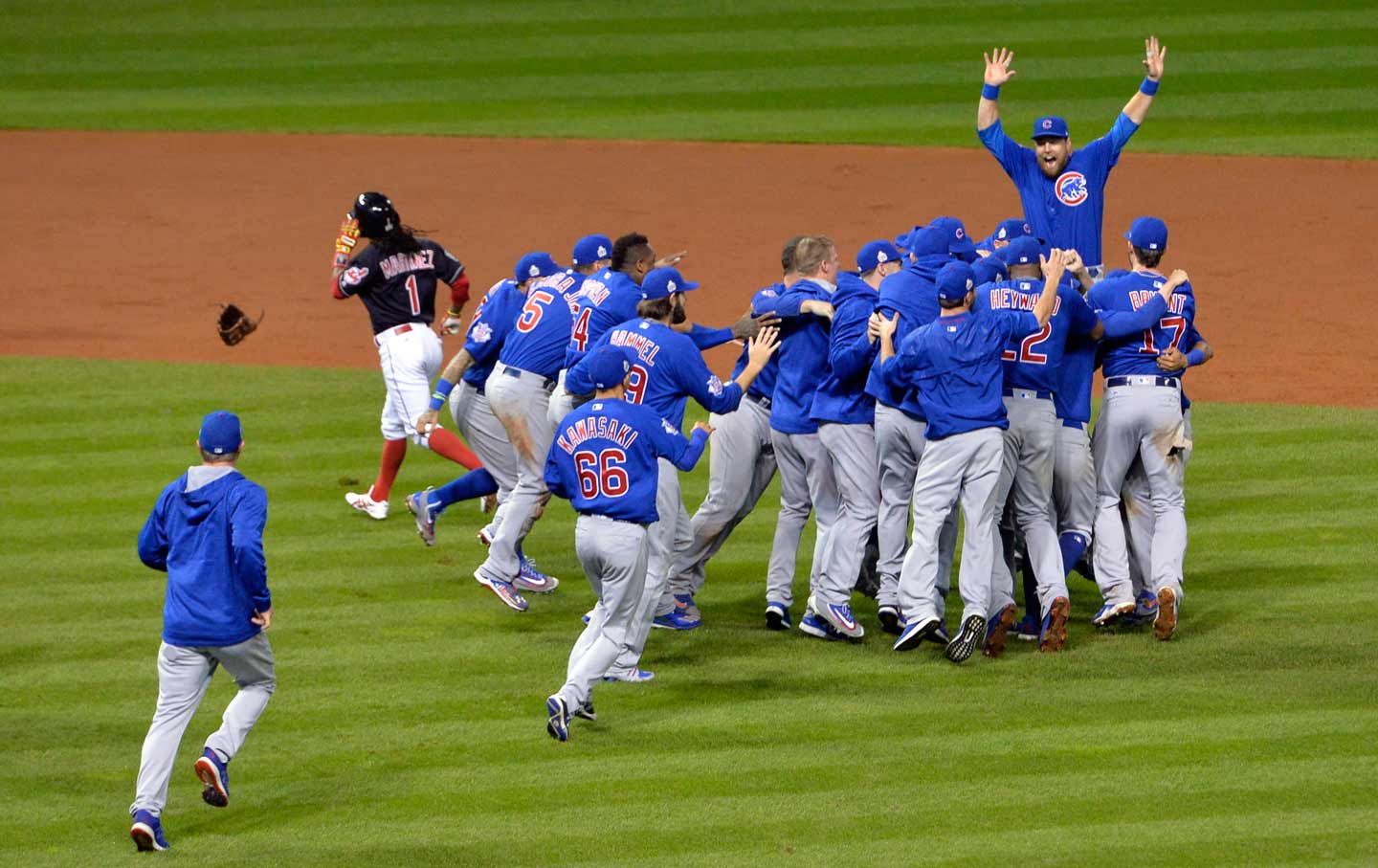 There are no words. If the greatest predictor of the future is the past, why would anyone think that the Chicago Cubs would win the World Series in our lifetime? They hadn’t won a title since 1908. They hadn’t even appeared in the Series since 1945, before Jackie Robinson broke the damn color line. This is a team with every possible resource, rooted in a major market, managed by future Hall of Famer Joe Maddon and stocked with players chosen by the man who brought a World Series title to Boston, “The Curse-Breaker,” Theo Epstein. And yet even with all of these rational indicators, baseball fans know that this is an irrational sport.

It’s the cruelest sport. It’s a sport that sometimes seems like it was directed by 1970s-era Brian DePalma, agonizing suspense that culminates in horror. It ties your body into more knots than my great aunt Estelle’s challah, with release more often than not coming with failure and the realization that the last hours, years, decades of your life, have been wasted. But not last night. And all of a sudden, it was worth every last second.

This World Series wrecked me, and I’m not even a Cubs fan. Maybe there was something about having family and friends who live in that remarkable and callously stereotyped city. Maybe it was the bubbling disgust of seeing that damnable minstrel face of Chief Wahoo every time a Cleveland player was on camera. Maybe it’s because this election season has been so embittering that having something to look forward to in the evening became its own form of catharsis, forging an even deeper gratitude. Maybe it was just wanting to see Bill Murray happy. But either way, I was dying with every pitch, particularly in Game 7: secure in nothing other than the knowledge that it wouldn’t be easy. It’s never easy, because it’s baseball. It’s the Cubs. And it’s Cleveland. My only surprise is that Game 7 only went 10 innings and not 20.

If you missed it, please know that your cardiologist thanks you. The Cubs had a 6-3 lead in the eighth inning, only to see it disappear with two outs. Then at 6-6 in the ninth, they had a runner on third with one out and somehow, Joe Maddon told his second baseman Javy Baez, on a 3-2 pitch, to bunt. Bunt! The bunt was foul in every sense, which meant strike three, which eventually meant extra innings. Then a blessed rain delay stopped everything for 20 minutes, and the shellshocked Cubs somehow got their bearings. We found out later that Jason “J-Hey” Heyward, the charismatic right fielder best known for not living up to his mammoth free-agent contract, earned every last cent by calling the players out of the dugout and into the weight room to tell everyone that they were going to get this done. It was stunning to see player after player, amid the pandemonium on the field after the final out, mention Heyward pulling folks together when they needed it most.

Yes, there are politically disturbing angles to the Chicago Cubs, as there are for every pro-sports franchise. The team’s owner, Tom Ricketts is part of a billionaire family that has some liberal members, but mostly openly bankrolls the right wing and puts their money behind agendas that prey on the very divisions that are the antithesis to this beautifully diverse and unified team. Their star closer Aroldis Chapman is an abuser of women, and it was disturbing to see this part of history whitewashed by announcers. It was equally disturbing to see the remarkable constellation of female baseball writers on social media both excoriated for pointing this out and also excoriated for not mentioning it after his every pitch, as if this task is their gendered responsibility alone. This is big-time pro sports in the United States, and we all know that it’s dirty as sin, and maybe we also know that it always has been. But it also has the capacity to make us feel synapses explode that otherwise would have gone undiscovered. This is especially true with baseball, the cruelest sport, but also, when you need it most, the kindest. In these days, leading up to November 8, we needed this. Badly.

There is a line in the criminally underrated David O. Russell movie Flirting with Disaster when the married Ben Stiller tries and fails to have an affair with Tea Leoni. After it’s clear that they won’t have sex, he mumbles, “My marriage is obviously vulnerable at this point.” Leoni responds, exasperated at his idiocy, “Every marriage is vulnerable. Otherwise, being married wouldn’t mean anything, would it?” This Game 7, this remarkable Cubs team, and those last three innings made all of us feel vulnerable. And that’s why it mattered so damn much.