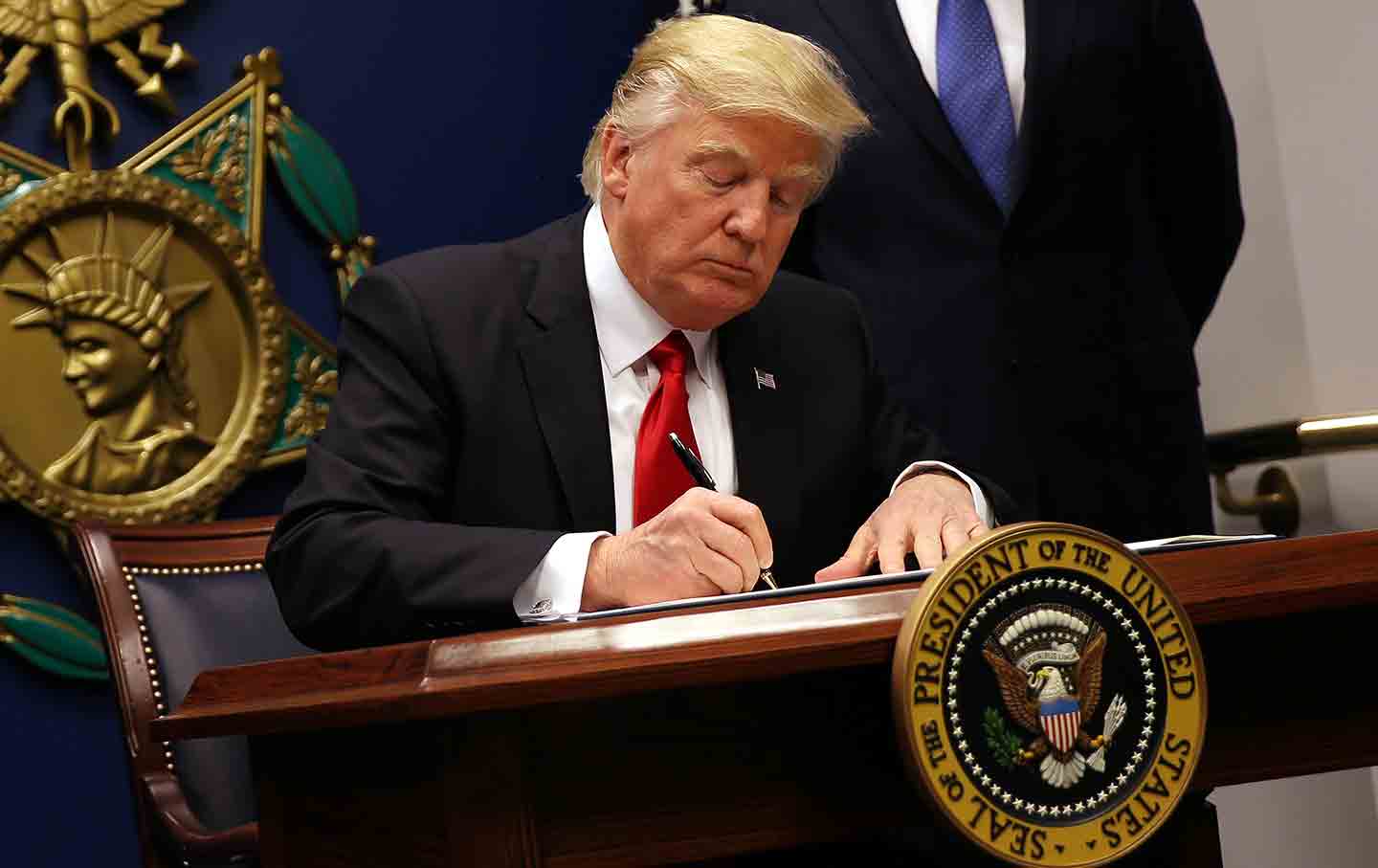 Donald Trump’s racist “Muslim ban” comes after a year that represented a triumph of visibility for Muslim athletes. There was Mo Farah, the British distance runner born in Somalia who won two Olympic gold medals in Rio. There was saber fencer Ibtihaj Muhammad, the first Muslim-American woman to wear a hijab while competing for the United States. Muhammad won bronze as part of the team competition, becoming remarkably the first Muslim-American woman to win a medal at the Olympics. We saw Riyad Mahrez, a Muslim of Algerian descent, become central to Leicester City’s winning of the club’s first-ever championship in England’s Premier League, in arguably the greatest sports upset of all time. We saw Atlanta Falcons wide receiver Mohamed Sanu emerge as a critical target for quarterback Matt Ryan as the team readies for the Super Bowl. Even the much-maligned NBA guard Dion Waiters—yes, he is Muslim—is splashing game-winning three pointers for the Miami Heat.

Then there were the Muslim legends of the sports world who were heard and even celebrated throughout 2016. We had basketball legend Kareem Abdul-Jabbar flowering as a political voice, with a series of viral essays about politics in the United States and a speaking spot at the Democratic National Convention. We had the great Mahmoud Abdul-Rauf, removed from the NBA 20 years ago for refusing to stand for the anthem, reemerge in a series of interviews as media members saw echoes of his story in the kneeling protests of San Francisco 49ers quarterback Colin Kaepernick. Most powerfully, there was the international appreciation of the great Muhammad Ali upon his death, and the centering of his Islamic faith at his internationally televised funeral service. It was said to me in Louisville by Muslim leader Dahlia Mogahed that the mourning for Ali was so international that his Islamic funeral prayers rolled over 24 straight hours, from time zone to time zone across the earth.

In the December before his death, Muhammad Ali issued one last public statement, called “Presidential Candidates Proposing to Ban Muslim Immigration to the United States.” He said,

We as Muslims have to stand up to those who use Islam to advance their own personal agenda…. Speaking as someone who has never been accused of political correctness, I believe that our political leaders should use their position to bring understanding about the religion of Islam…

Our political leaders did not do this. Now, Donald Trump, a person who last year brayed that he “couldn’t name” any Muslim athletes, has spit in the face of all of these accomplishments and said that their lives, their faith, their humanity simply don’t matter. Now the great Mo Farah, who holds dual British and Somali citizenship, is banned from entering the United States, even though he has been living and training in Oregon. Now NBA players Luol Deng and Thon Maker—both born in South Sudan— are at risk of detention and deportation.

Last December, NFL safety Isa Abdul-Quddus—who is Muslim—said of Trump’s proposed Muslim ban, “I’m just hoping that either he can change his mindset to be a bit more open-minded or people just realize we can’t have the ignorance in office.”

He was correct about Trump’s ignorance and wrong that he would change his mindset.

Now athletes are reacting to this new reality. Nazr Muhammed, a longtime NBA player, tweeted on Saturday, “It’s a tough day when u find out that so many ppl that u thought were fans or friends really hate u and everything u believe in.” His former teammate with the Spurs, Brent Barry, responded, “You know I love you, you are my brother; Love and compassion are necessities, not luxuries. Without them humanity cannot survive.”

He is right. Many say often—and correctly—that the majority of us did not vote for Donald Trump; that he lost the election by 2.9 million votes; that he is “illegitimate.” All of that is true, but it doesn’t change the very real damage that he is inflicting upon us. The majority might not have elected Donald Trump, but the majority now has the responsibility to undo this damage and resist this toxic agenda. The sports world needs to see itself as a part of this resistance. That means non-Muslim athletes speaking out on behalf of their Muslim teammates. That means the International Olympic Committee and FIFA refusing to consider the United States as host for the Olympics or World Cup as long as the ban is in effect. That means laying siege to the Trump agenda of rank anti-Islamic bigotry. That means going to the local airport to protest (and what a bizarre, beautiful sentence that is to write). We have all enjoyed the triumphs of Muslim athletes in 2016. It would be absolutely amoral to not stand with them in 2017.