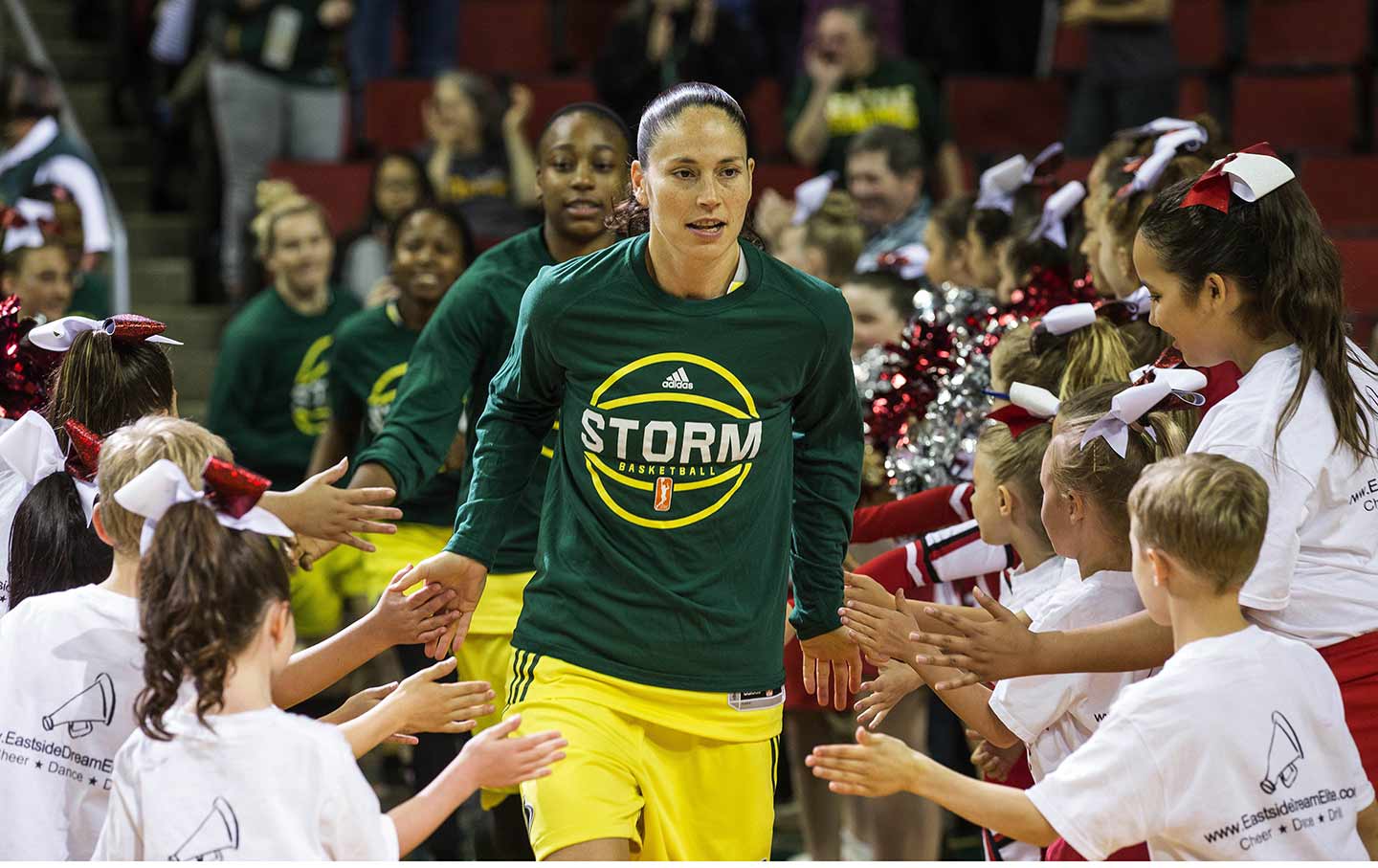 Seattle Storm player Sue Bird leads the team for a game against the Minnesota Lynx in Seattle, Washington, on June 3, 2017. (The Seattle Times via AP / Dean Rutz)

When NBA owner Clay Bennett—a man with politics somewhere to the right of Genghis Khan—absconded with the NBA’s Seattle Supersonics, devastating a city, and moved them to Oklahoma for the high-minded purpose of hundreds of millions of dollars in corporate welfare, he left something behind: the WNBA franchise, the Seattle Storm.

His disregard for women’s basketball has had two unintended consequences. One, it was a gift for the people of Seattle, who have been able to watch a team with terrific players such as Breanna Stewart, Jewell Lloyd, and Sue Bird. And second, it is proving very important for an organization that Bennett’s operatives in Washington want to destroy: Planned Parenthood. Yes, Planned Parenthood.

Even if Bennett had kept the Sonics in Seattle, the man who keeps a bust of Ronald Reagan outside of his office would not be allowing the audacious—and desperately needed—partnership just announced between the Storm and Planned Parenthood. This July 18 will be Planned Parenthood Night for the Storm, the first-ever such partnership between a pro-sports franchise and the besieged women’s-health organization. Before the game there will be a fundraising and informational rally on KeyArena’s West Plaza for Planned Parenthood.

As individual Americans who are not legislators, merely citizens, we have felt hamstrung by our limited ability to make a meaningful impact in the national health care debate. Access to affordable, quality health care, including a full range of reproductive care, is a critical precondition for anyone—especially girls and women, to pursue their dreams and grow into their best selves.

The move by the Storm is a recognition that Planned Parenthood is not only popular in liberal enclaves like Seattle. Despite years of demonization, it is viewed positively by a majority of the country and is far more popular than the illegitimate sexual predator who inhabits the Oval Office.

But despite the organization’s popularity, its ability to provide services, particularly in poor rural places, could be forever crippled by the health legislation poised to pass this week.

This move by the Storm to openly partner with Planned Parenthood is also significant because, even with the renaissance of outspoken athletes in recent years, team owners and executives have largely been unapologetic institutions of reaction. If they aren’t trying to shut down political athletes or wrest even more corporate welfare from cash-strapped cities, they are projecting the politics of hyper-militarism or hyper-corporate control. Pro-sports owners have given millions of dollars to the current occupant of the White House and he is rewarding them with ambassadorships—payback for greasing the greasiest palms we’ve ever seen in the Oval House.

Sports owners have also blithely tread on women’s reproductive health. The Kansas City Royals have an agreement with the anti-abortion organization Vitae, which has a massive billboard inside the stadium and advertises on the team’s radio broadcasts. Vitae also disseminates false and dangerous information about women’s health—such as the fiction that cancer and suicide are a byproduct of abortions. The Royals also rejected an radio ad by a women’s group attempting to counter these myths. In other words, they are the antithesis of Planned Parenthood.

The move by the Storm is a recognition that women’s health is under attack and sports franchises—not merely athletes—can play a role in turning this around.